Growing up in a home, you gain a certain level of comfort—and often a sense of nostalgia—when it comes to the space’s design and character. However, over the course of time many of the traits that endear the space to you become features that must change to continue to serve the owners’ needs. Such is the case with the El Dorado childhood home of designer Courtney Smart Stone. 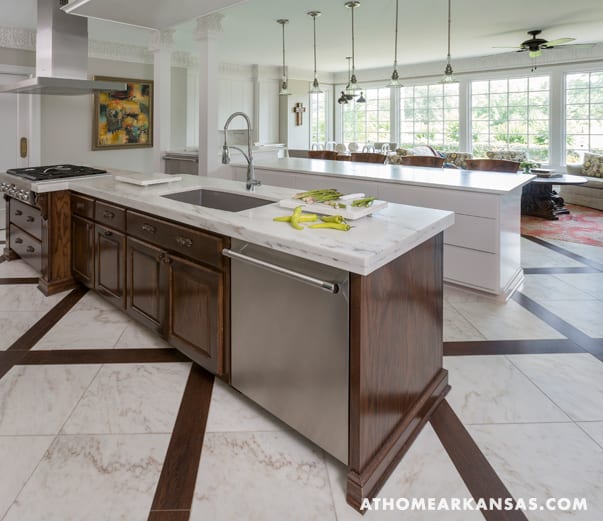 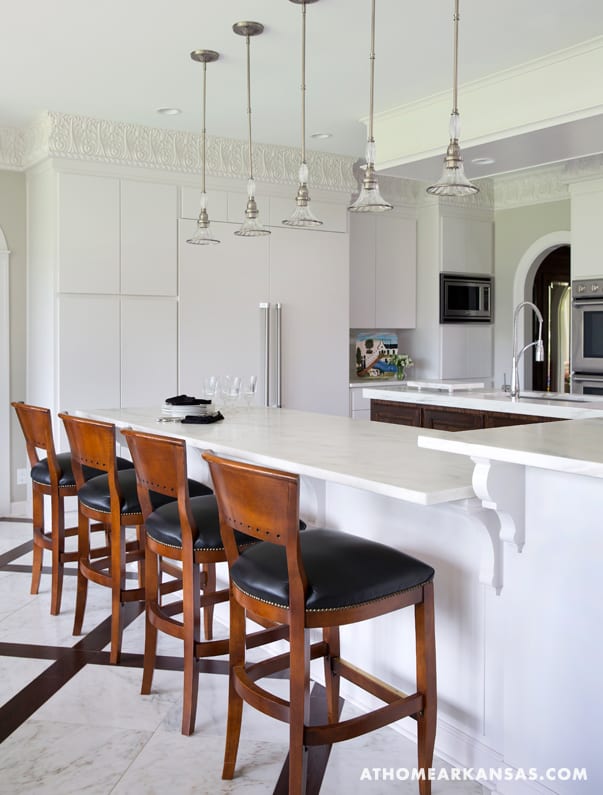 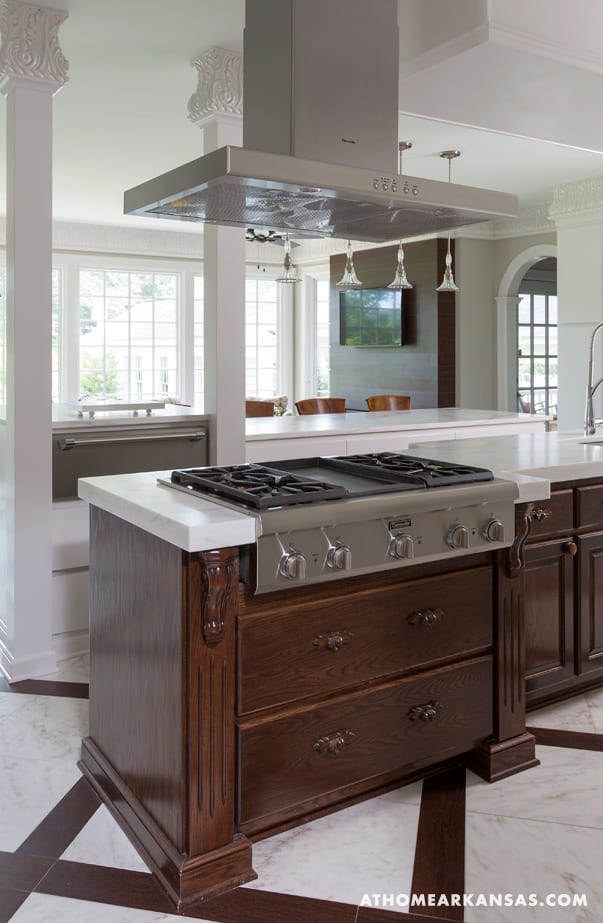 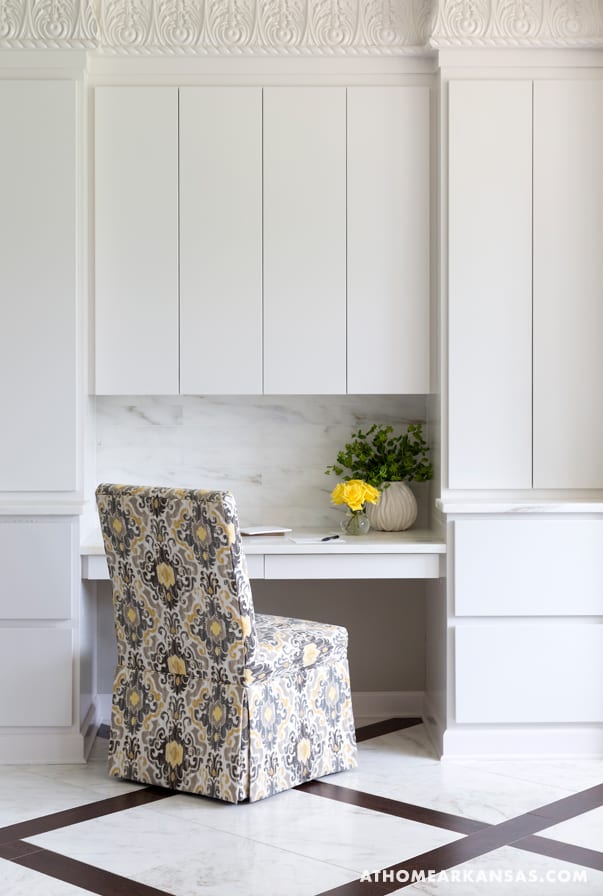 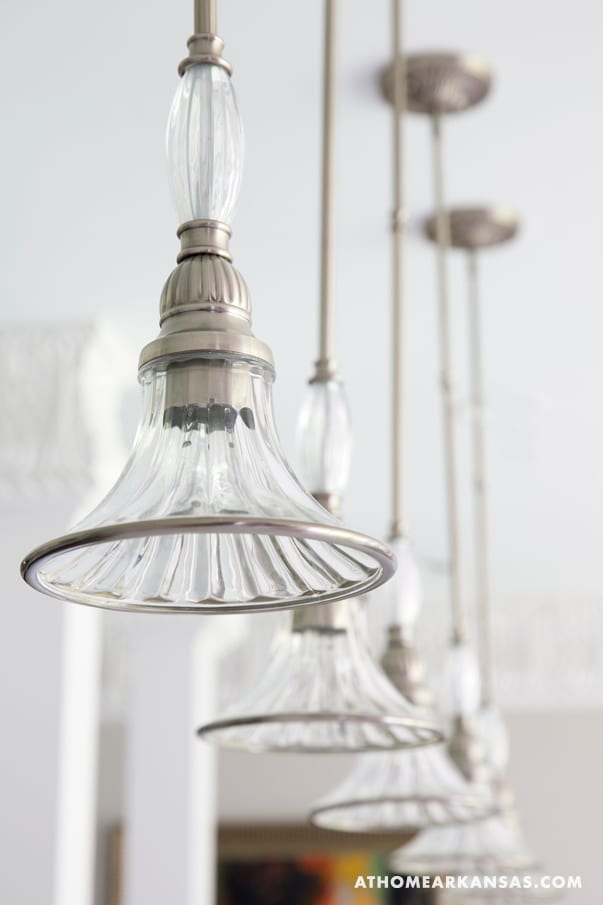 Michelle and Steve Smart purchased their colonial-style home 24 years ago. However, as their daughter (Stone) and her two brothers grew, moved out of the home, and began to start families of their own, the Smarts’ needs changed. “Living on the golf course, they have friends come up on the back deck to chat all the time, and they love being close to the pool to take their three grandchildren swimming,” says Stone of the couple’s casual lifestyle and fondness for their home’s location. “They knew they needed to make the home more functional, but just hadn’t found the right time to do it,” she adds. When Courtney graduated from the University of Arkansas’ interior design program and moved back to El Dorado to begin her career, it was clear the time had arrived.

Stone and her parents both liked the idea of opening up the kitchen to create an open-concept floor plan where living, dining, and cooking areas merged. However, as the plans progressed they realized this meant guests in the living room would not only be able to see their hosts in the kitchen, but also the pots and pans where they had prepared dinner. As a remedy Stone proposed keeping the formal living room’s wall intact and opening up the kitchen in a different direction by moving an outside wall and taking in a patio space. “We knew that if we didn’t enlarge the space, we weren’t going to be any better off,” says Michelle of the decision. The extra space now houses the breakfast table as well as a comfortable seating area or keeping room where family members can gather and watch television. “It’s a shame this wasn’t done when I was growing up so the whole family could’ve been together in one place,” says Stone of the newly created casual sitting area.

Mixing Past and Present

The Smarts have antiques throughout their home and wanted to keep a beloved French breakfast table in the room to create a sense of continuity throughout the house. To encourage this marriage of old and new, Stone incorporated rich woods into the modern white palette. For example, the flooring consists of a latticework pattern of wood-grain porcelain tiles and white marble. The same porcelain tiles were used to create the media wall in the keeping room, giving modern conveniences such as a wall-mounted television a heritage-rich feel. Stone also used ornately carved crown molding to soften the room’s modern lines and give the space “an evolved look with authenticity.”

As both Michelle and Courtney reflect on the project, it appears that not only has it brought the family together in one area of the home when they gather, but also drawn mother and daughter even closer. “It was so important to us to keep the integrity of the home while we updated it, and we trusted Courtney completely to make those decisions,” Michelle says. “God really gave her a talent, and it was a joy and privilege to work with our daughter to make this dream a reality.”

Functionality was equivalent with space when it came to the kitchen’s must-haves. Michelle had visited a friend in Colorado whose kitchen had two islands—one for working and a separate for dining or gathering. She loved the concept and decided to incorporate the idea into this renovation. The two islands run parallel to one another allowing Michelle to begin working on dinner at one while her grandchildren enjoy an afternoon snack at the other.