For a designer and his dear friend, this Fayetteville home has been decades in the making 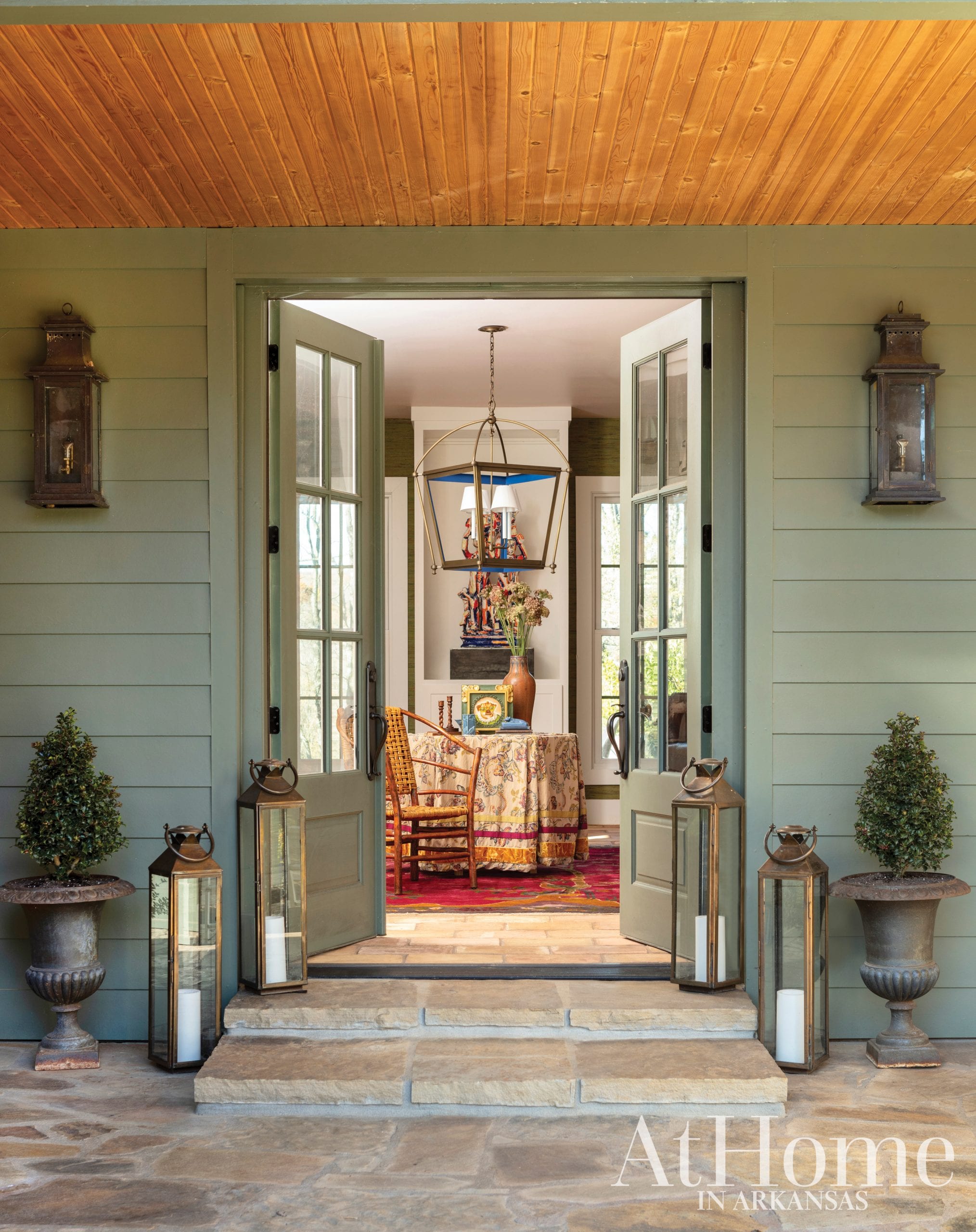 Walking into Melissa Banks’s home is like taking a trip both through time and around the world. As office manager for Goddard Design Group, the Springdale firm helmed by Chris Goddard, she is often immersed in the realm of global interiors, so it’s no surprise her personal home is a reflection of that aesthetic. Less apparent to the eye, however, is the home’s connection to its past.

Situated on 91 acres on the White River, the 19th century home was originally purchased by Melissa’s uncle. Thirty years later, it changed hands to her father, David Banks, who hired Goddard Design Group to modernize the interiors and add an updated primary suite. After he passed, Melissa moved in and has spent the past decade making it her own.

In that time, she also began working alongside Chris, which allowed the designer-client relationship to transition into a full-blown friendship. “We are both big travelers, and we travel well together and work well together,” he says, noting they’ve been everywhere from Palm Springs to Morocco as a team. For her house, they initially started with simple paint and lighting updates. “David only liked neutral and orange, and she is the queen of color,” Chris says. Several years later they embarked on a second phase, adding a great room with soaring ceilings and a spacious kitchen onto the old farmhouse.

Melissa’s furnishings are a mix of family pieces and antique store finds personalized with new paint, fun fabrics, and one-of-a-kind details, such as marbled lamp shades. “I’ve gotten to rework and reinterpret the house three different times and three different ways, and we’ve always tried to keep the materials and transitions between the rooms natural,” Chris says. “We wanted it to feel like the house evolved over
time; to honor the past but bring it forward, in Melissa’s style.” 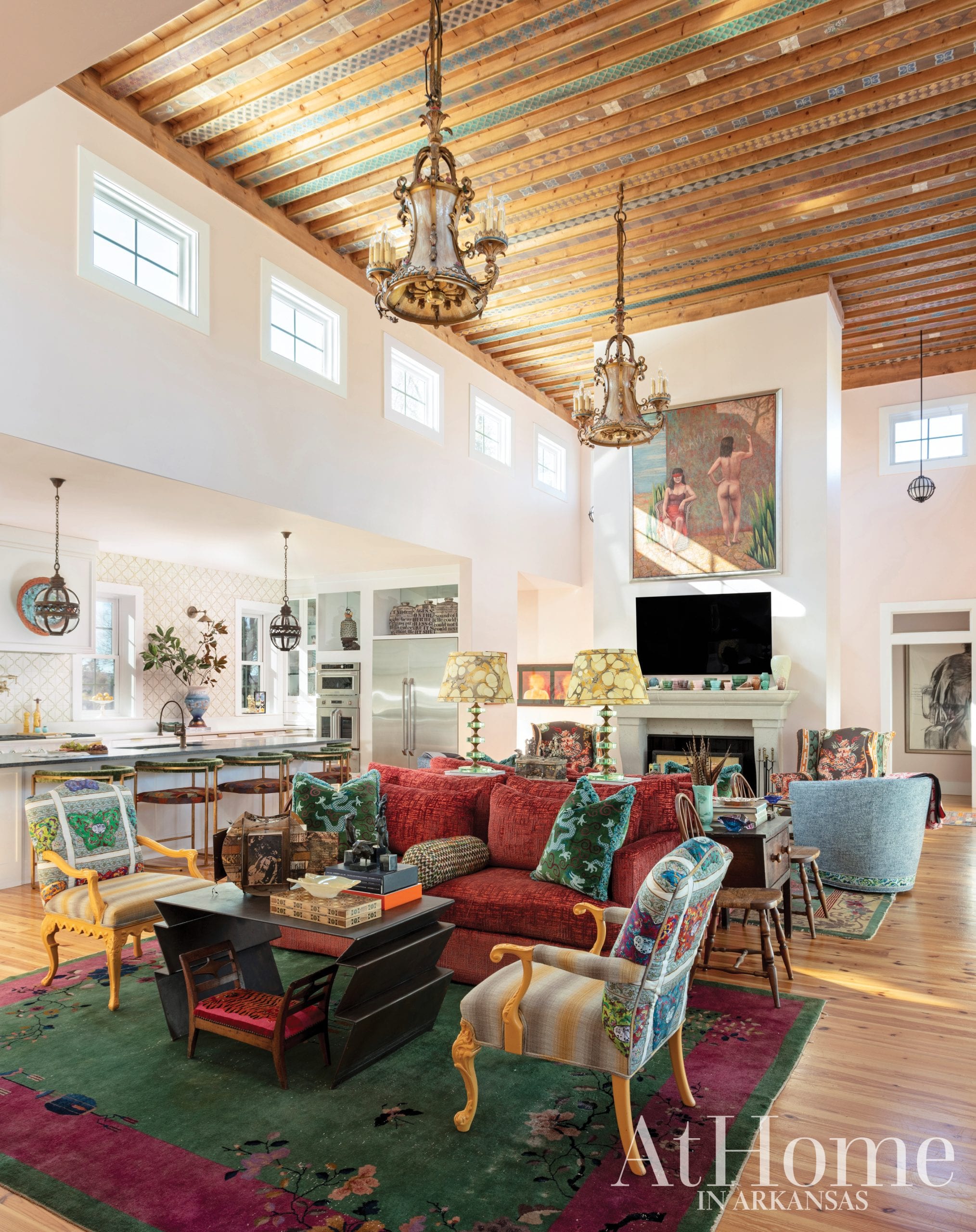 Great Expectations
The starting point for the great room was a custom double sofa designed by Chris, which set the tone for the scale of the space. Meaningful motifs are hidden in the hand-painted ceiling beams, including a pug, a Golden Goblin (the mascot for Harrison High School, David’s alma mater), and Arkansas symbols such as a mockingbird, apple blossom, and loblolly pine. “We took something we were inspired by in Morocco and made it Arkansas,” Chris says. 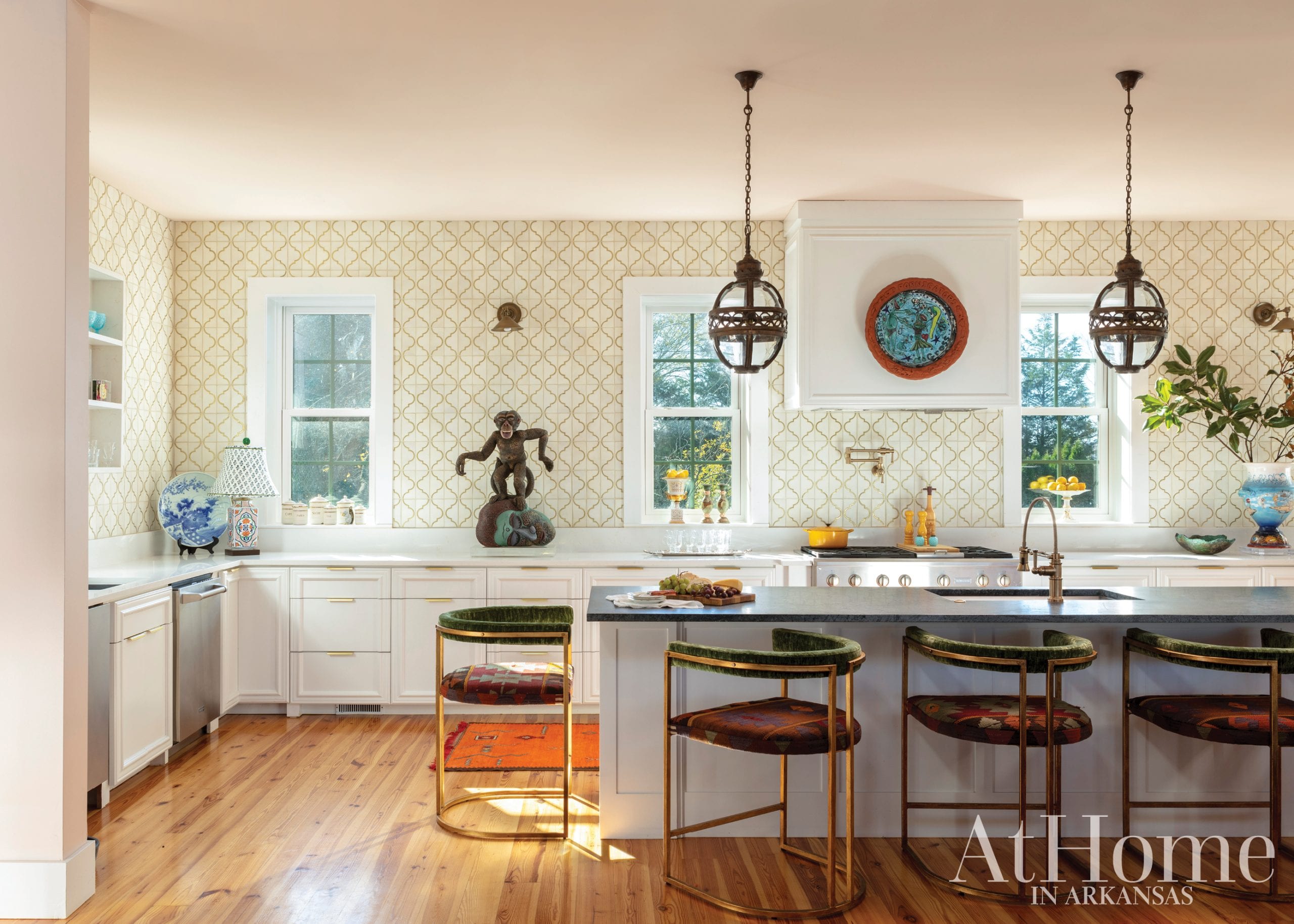 Kitchen Character
Without upper cabinetry, a handmade tile inlaid with bronze becomes the focal point of the kitchen. The barstools are covered in antique rugs as a “throwback to the early ’80s when everyone had kilim pillows,” Chris says. “Melissa and I are both children of the ’70s, so there are lots of nods to that time.” A monkey statue—lovingly nicknamed Buddy—is from David’s collection. 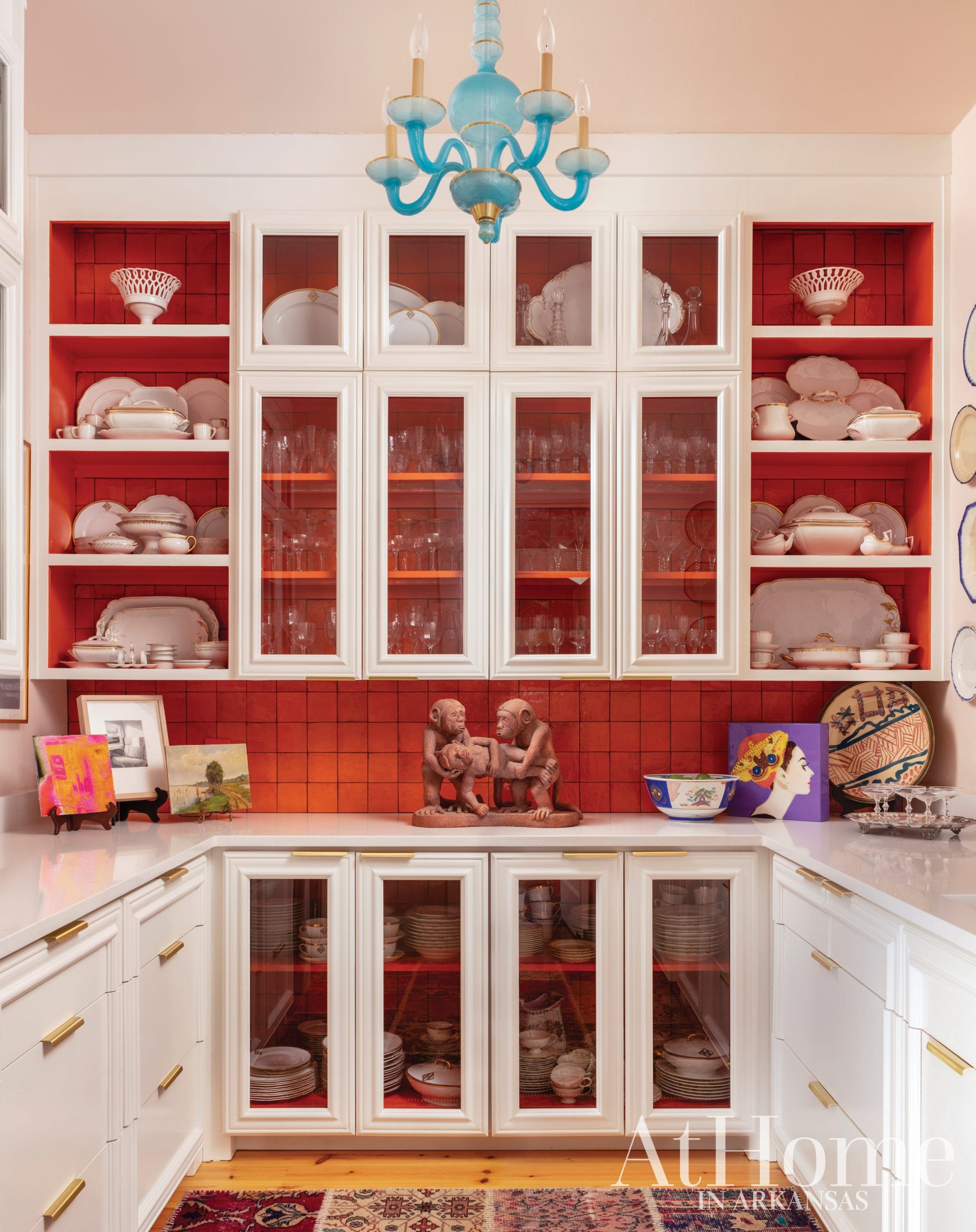 Glass-front cabinets and open shelving in the butler’s pantry allow Melissa to display a collection of china that has been in the family for generations. 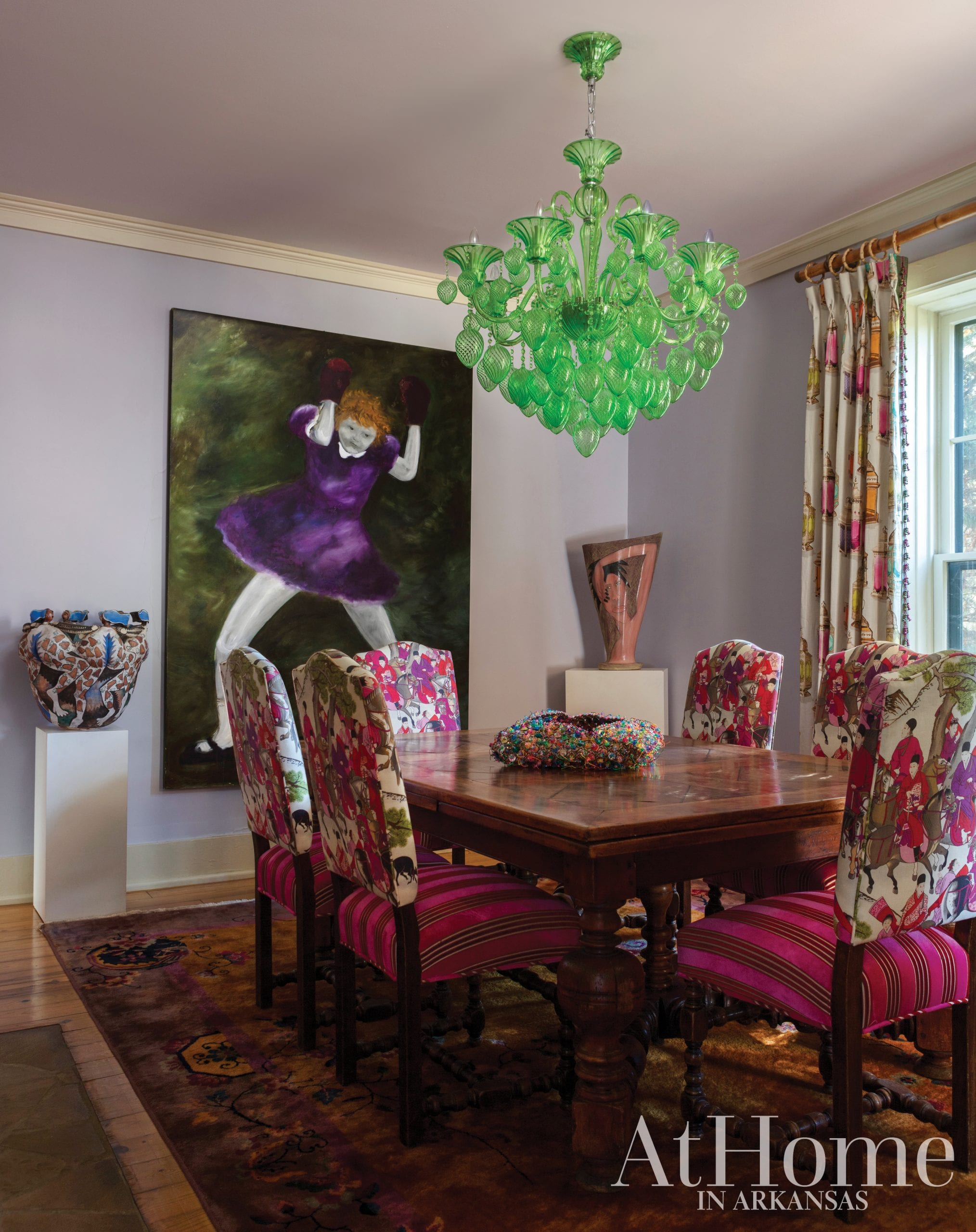 Dining by Design
The dining room received a fresh coat of lavender paint on the walls and the addition of a green Murano glass chandelier when Melissa first moved in almost a decade ago. Like the great room, this space is anchored by an antique Chinese art deco rug—one of Chris’s signatures, he says. A piece by painter Kim Dingle ties together the room’s green and purple hues. “She did a whole series of girls who are supposed to look pretty in their party dresses, but showing that we can be tough and strong, too,” Melissa says. 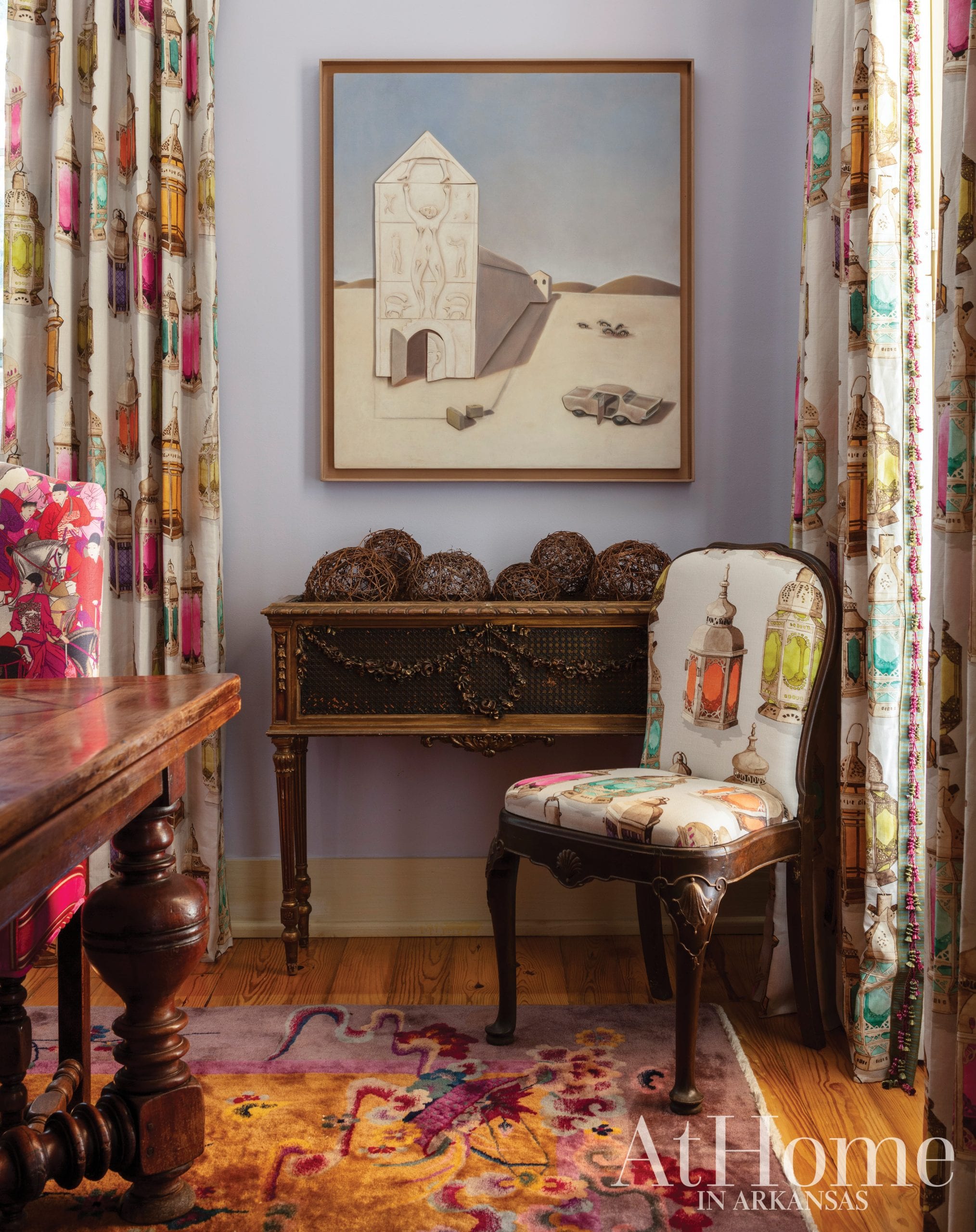 “The whole point is for the furnishings to be old and tell a story, kind of like the house.”
—Chris Goddard, designer 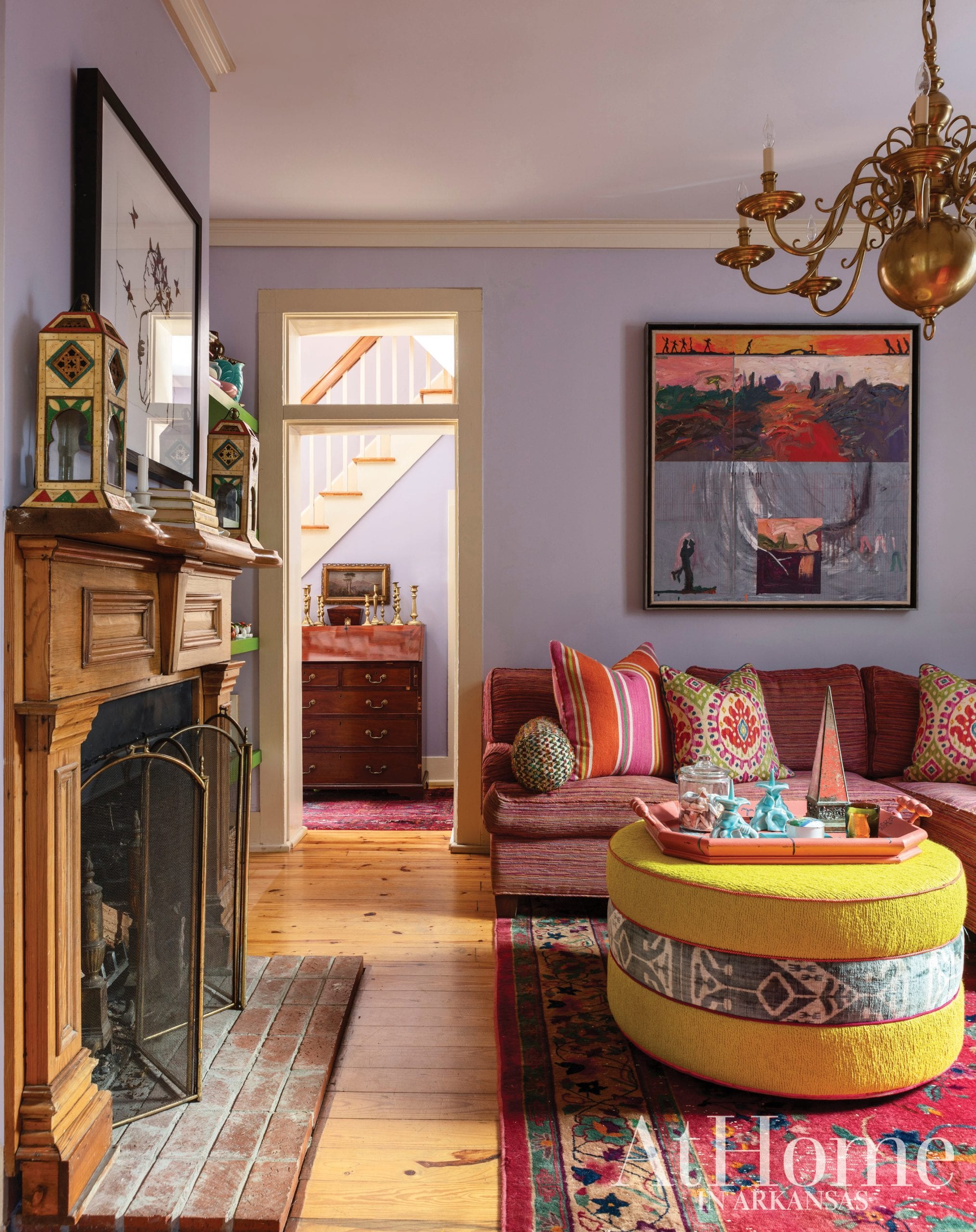 The home’s original living room has been turned into a comfortable, collected reading room. “That was the very first room we did when Melissa moved in. It’s been interesting to see that as the house has evolved, the color story has stayed the same,” Chris says. 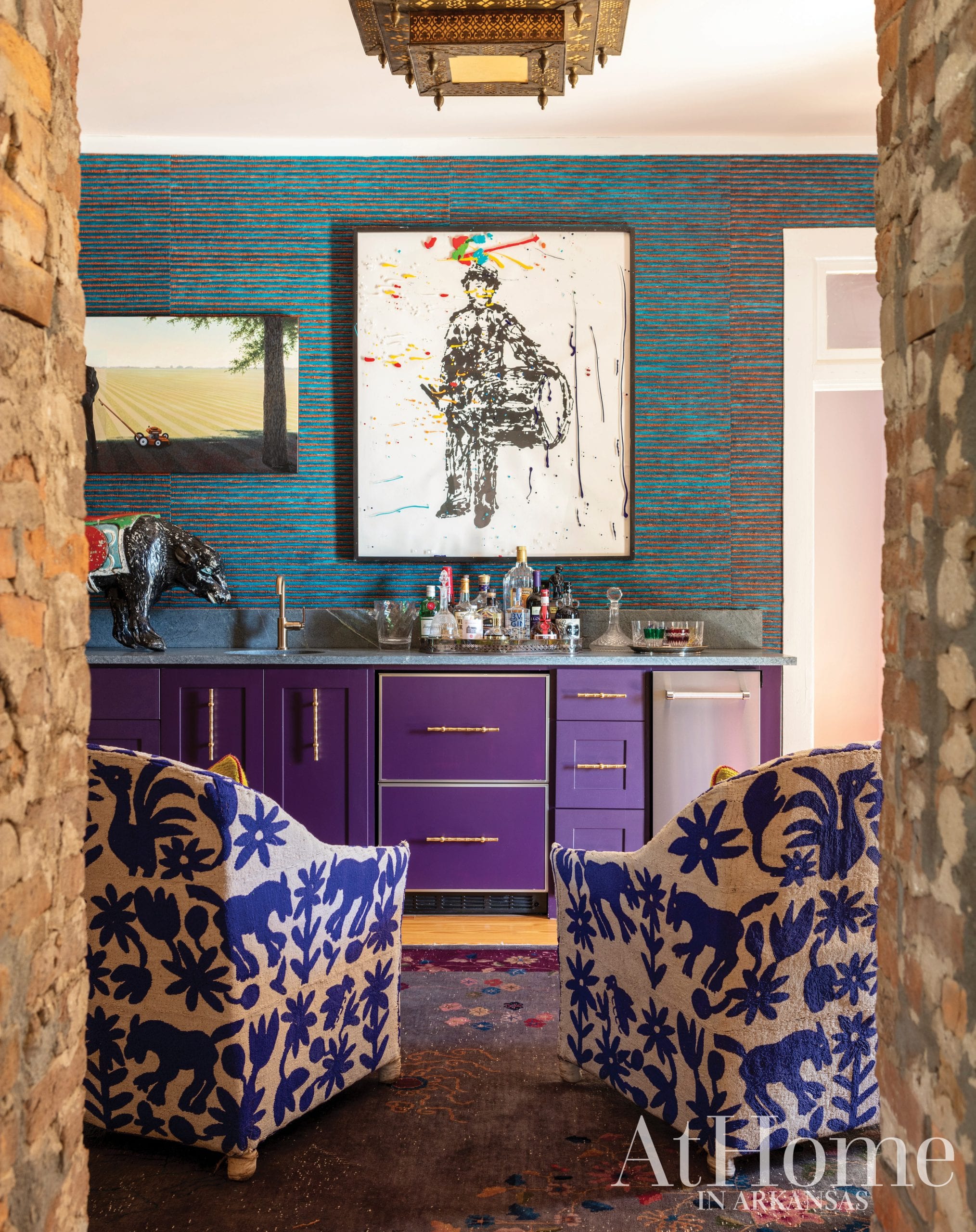 Eclectic Lounge
A casual “smoking room” pays homage to Melissa’s father, who loved to smoke cigars. Chris gave this room—the original home’s kitchen—a wet bar and comfortable seating to function as overflow when entertaining. During renovations, exposed brick was left untouched where possible to tell the story of the home’s history. A pair of hand-beaded chairs from Africa speak to Melissa’s love of both travel and artisan-made crafts. 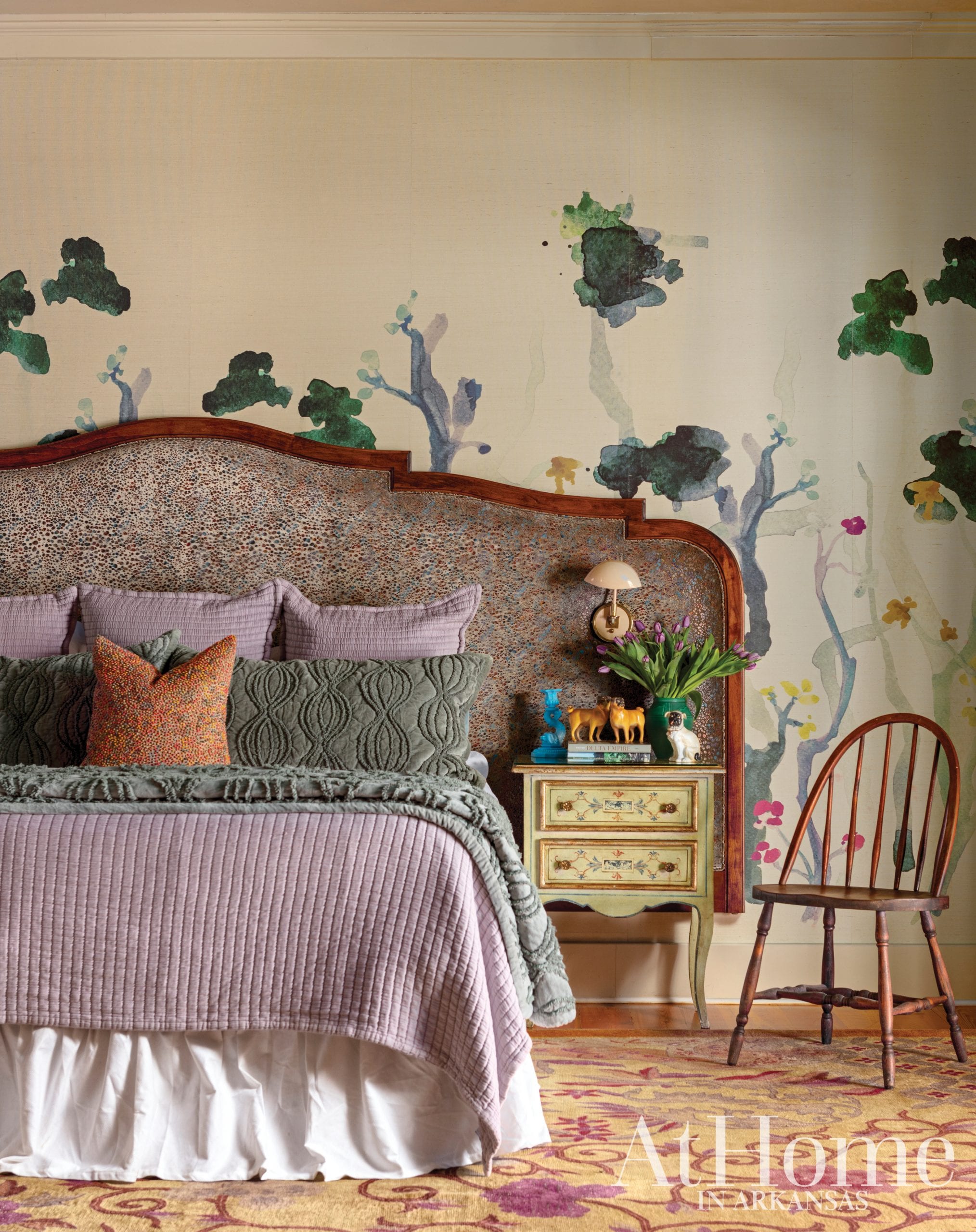 Sweet Dreams
In a home filled with color, pattern, and collections, the primary bedroom is no different; however, a coverlet and shams in muted tones drawn from the hand-painted wallcovering give the eye respite from brighter hues in the rooms beyond. Chris designed a custom bed—complete with built-in sconces—around a pair of antique Italian chests Melissa uses as nightstands. 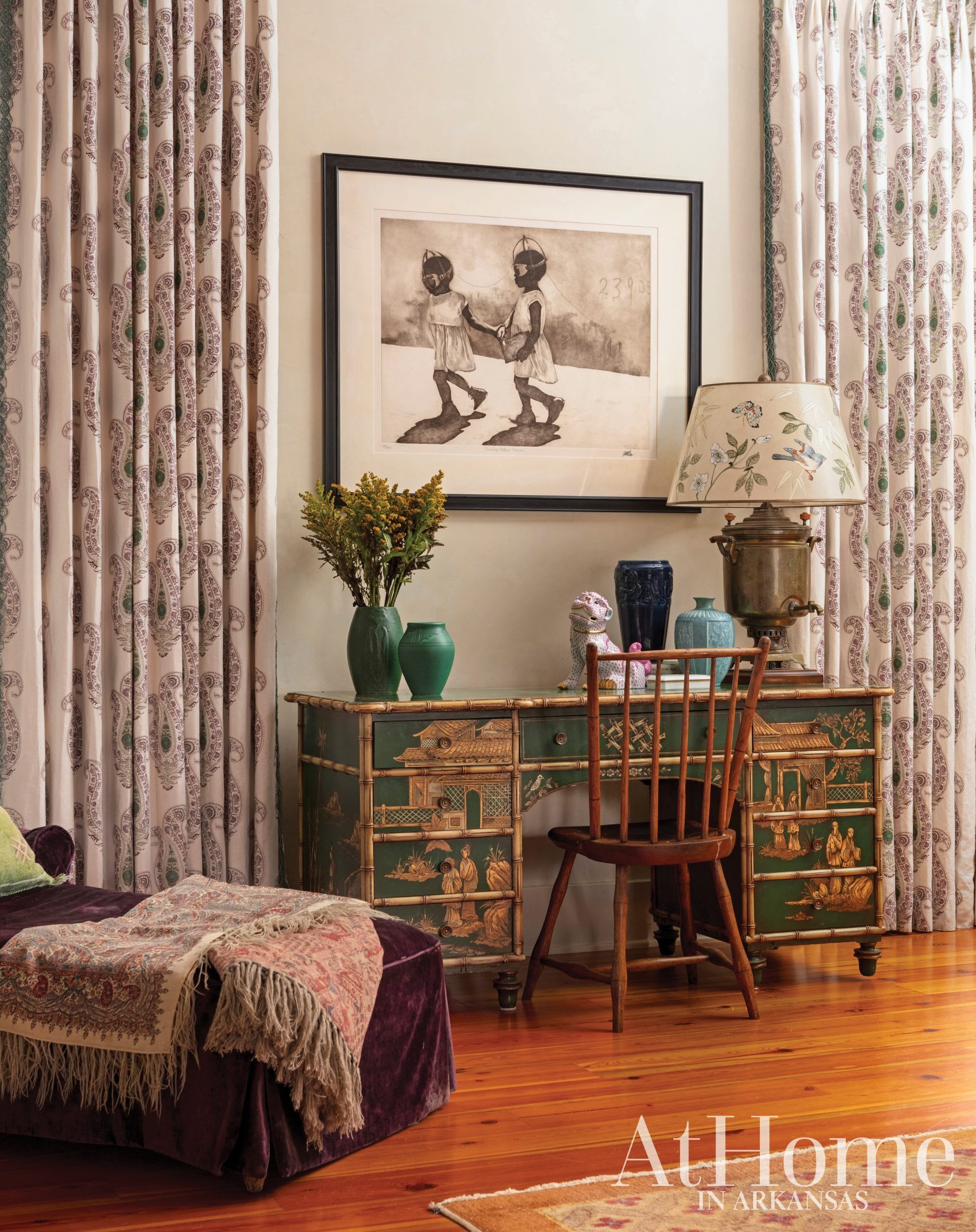 A chinoiserie desk in an unexpected color provides a workspace in the bedroom. Chris turned David’s old samovar into a lamp and added a hand-painted shade to create a unique and sentimental piece.