Designer Jill Lawrence invites us on a holiday tour of her Little Rock home, which is dressed for the season in a mix of evergreen clippings and bright lemony hues 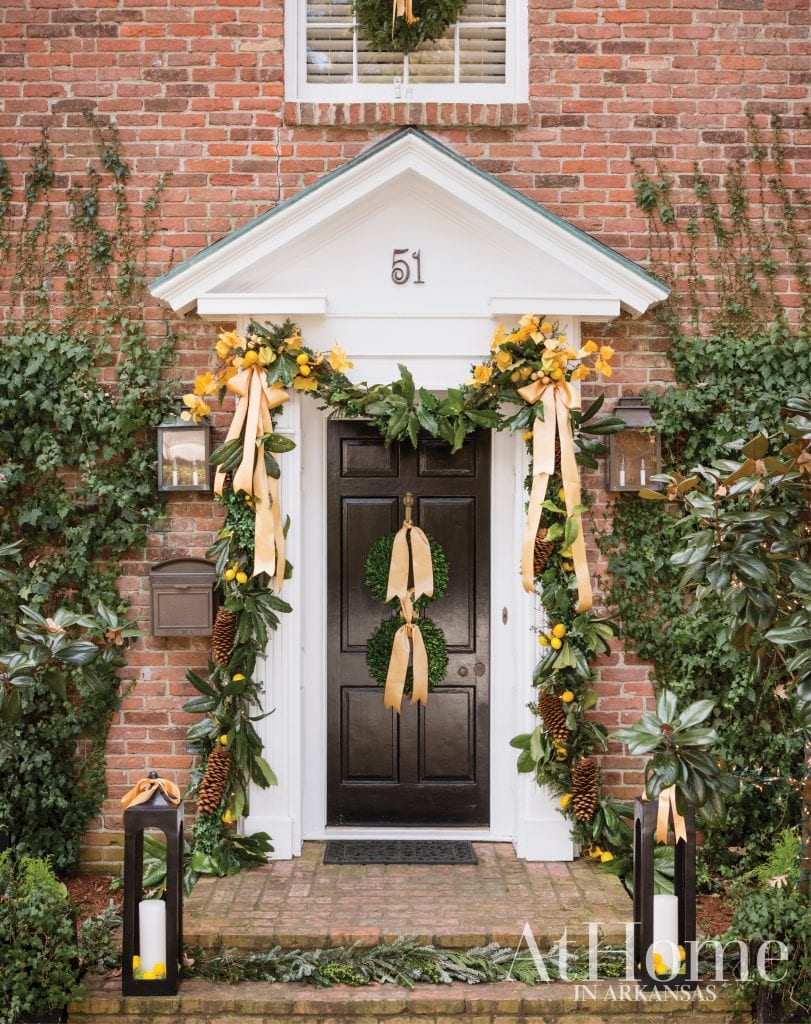 History has a way of weaving itself into the home designer Jill Lawrence shares with her husband, Frank, and their two children. For starters, the house was modeled after a traditional Williamsburg, Virginia home. Second, the original owners—who were the only family to live there before the Lawrences—paid attention to detail in terms of the home’s architectural features as well as its furnishings. These characteristics—along with a “gut feeling” shared by both Jill and Frank—led the family to believe their own history could be written within the home’s walls.

Frank, who often scouted for houses while running in favorite Little Rock neighborhoods, was the one who initially spotted the home. “It went on the market in 2003, and I don’t even think it had been on the market a day before we went to look at it,” Jill says. The former owner showed the Lawrences the house herself. “She and her husband built it out of love, and they put everything they had into this house. Their good friend the late Victor Zanovich, who was a long-time designer here in Little Rock and a lovely human, did most of the design work,” Jill relates. “As the story goes, he also spent a lot of holidays in the house with them.”

Whether with everyday furnishings or seasonal décor, Jill honors the history of this home and its previous owners by complementing the architecture with her own style, which she refers to as “clean-lined aesthetics.” Jill says that her number one design priority—in both clients’ homes and her own—is for the finished project to stand the test of time and still look good 10 to 15 years down the road. “We’ve tried really hard not to take the soul out of this house, but to decorate it to make it our own. Since we bought it, we have felt that we are its caretakers. We ask ourselves, ‘What do we need to do to keep it in shape and to make [the former owner] as proud as she could be?’” 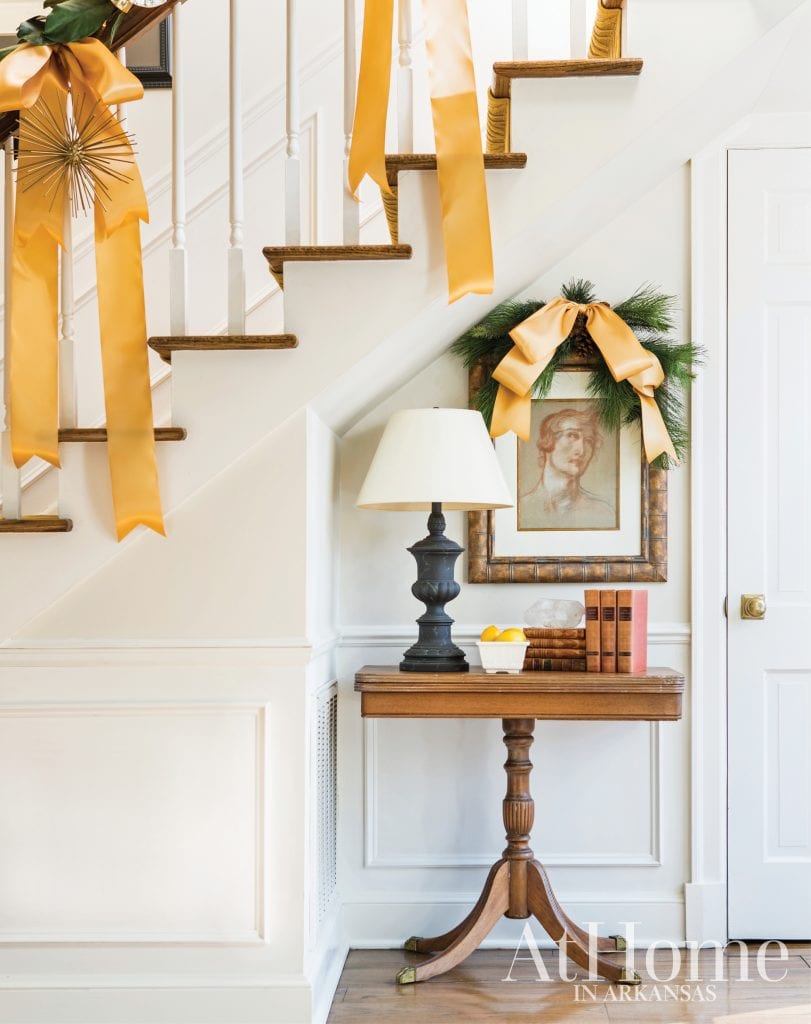 TRENDING TRADITIONAL
“I think interior design should always complement the exterior of the home,” Jill says. The small nook by the stairwell houses a Duncan Phyfe game table that belonged to Frank’s grandmother and a sketch Jill found at a Roy Dudley Estate Sale. 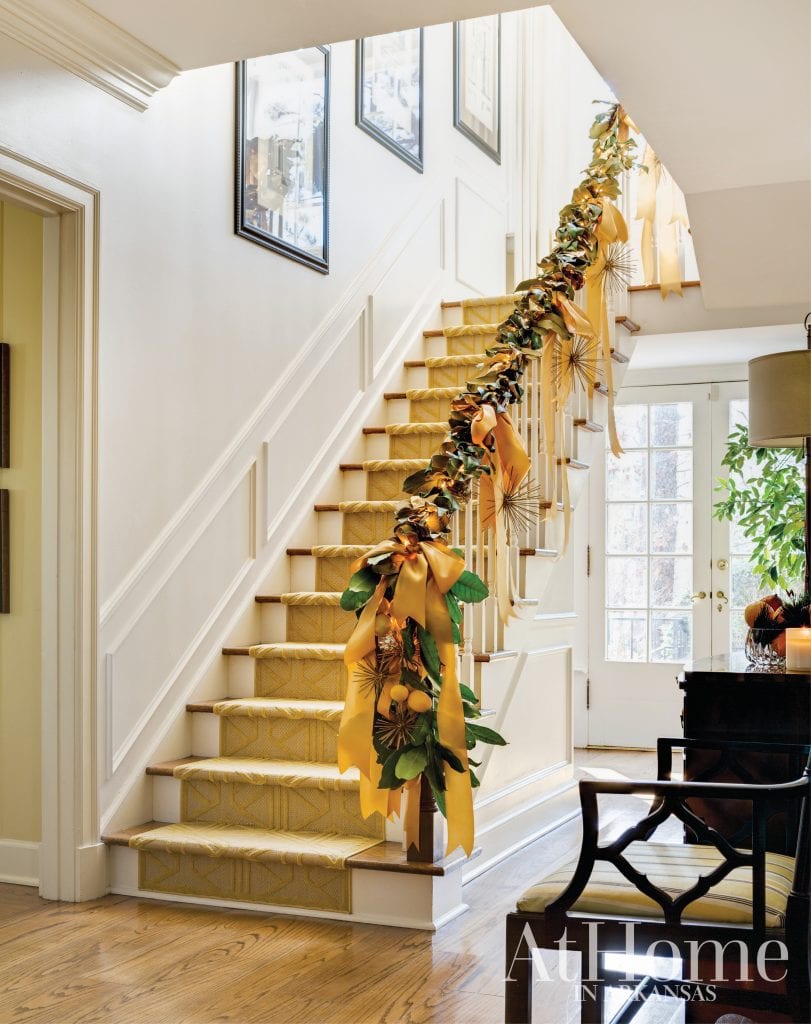 MAKING AN ENTRANCE
“The banister changes every year. It’s been every incarnation you can imagine,” Jill says. This year fresh lemons and greenery mix with contemporary gold starburst accents for a look that is indicative of the designer’s timeless-meets-modern style. Across from the stairwell, a pair of Chinese Chippendale chairs flanks a Baker Sheraton-style chest. A dear friend of Jill’s, who lives in New York, drew the set of blind-contour, continuous-line subjects seen in the frames. The banister’s décor is echoed through an evergreen wreath and cut-glass bowl of lemons. 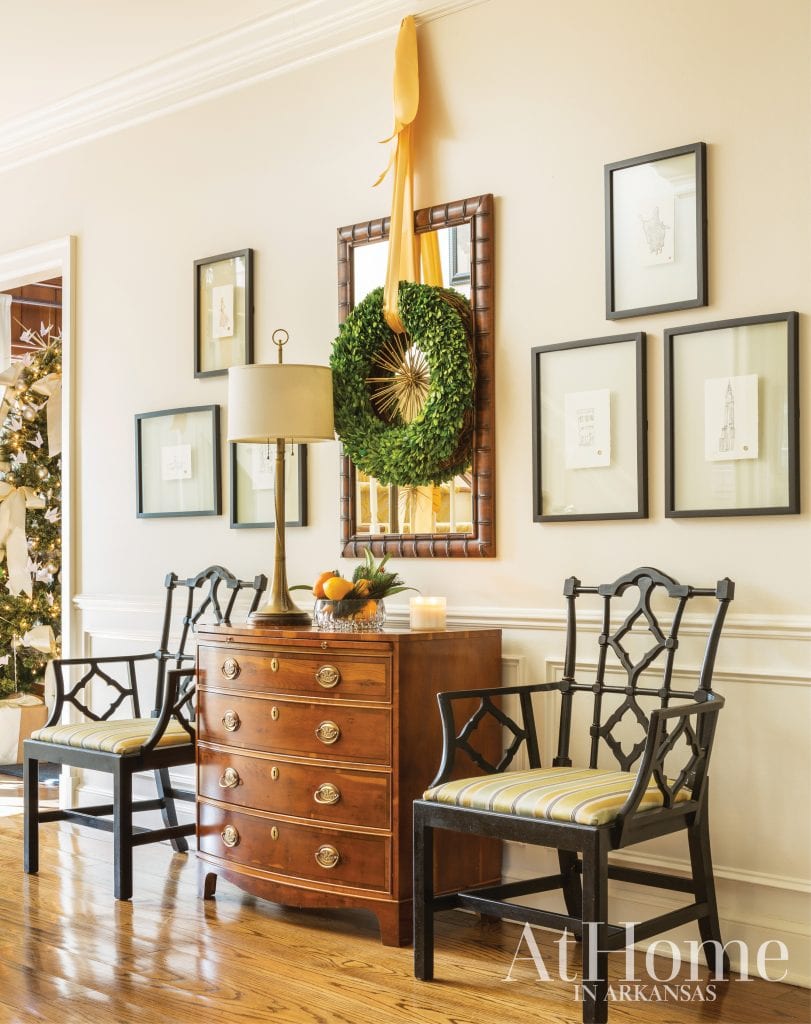 STYLE MEETS SENTIMENT
The home’s East Lake Victorian dining table originally belonged to Frank’s grandmother but came to hold special significance for Frank and Jill. “We served our wedding cake on this table,” Jill says. Originally dark wood, Jill painted the table to give it a lighter, more contemporary look. The grape harvest baskets on the wall are vintage pieces she found at Fabulous Finds, while the round mirror on the mantel was purchased through Cindy Staley’s English Antique Imports. “I’ve had it for 20 years, and it’s one of those pieces that won’t ever go out of style,” Jill says. Fresh garland—laden with lemons and yellow ribbon—adds a soft seasonality to the surround. The marble piece on the table also holds meaning. “I picked up this piece at Marshall Clements shortly after Reggie Marshall passed away. It was a sentimental moment for me, and now the statue is a great conversation piece on our table.” 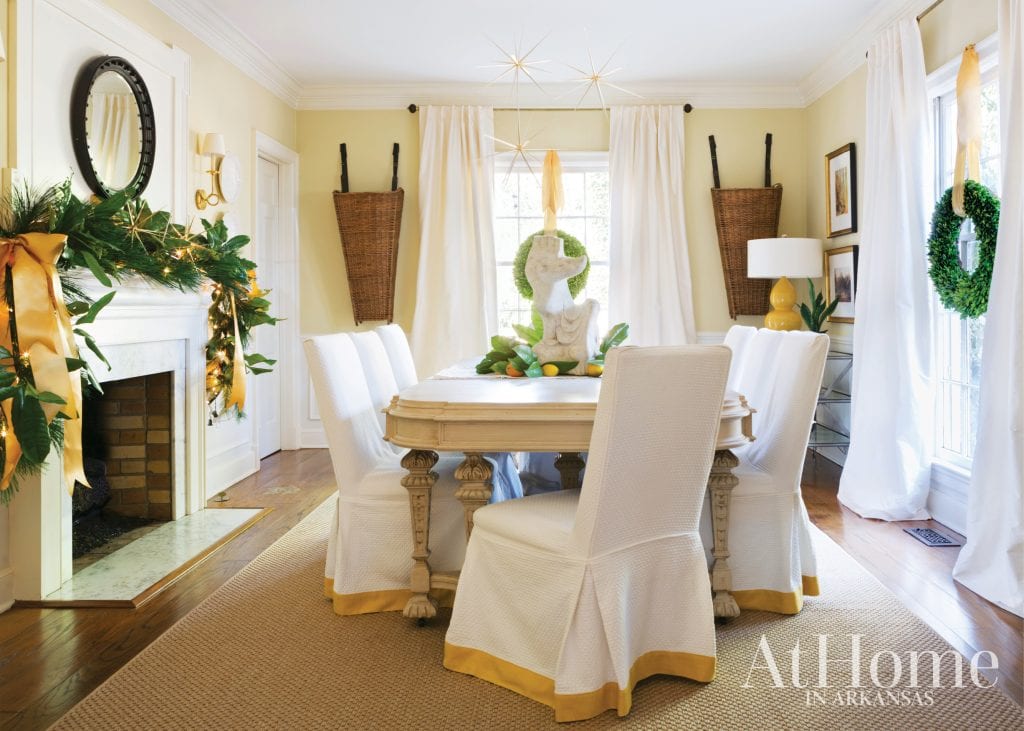 THE PLACE TO BE
The library is a popular hangout for Caroline, her brother, Jack, and their friends. “Most weekends, the sectional sofa is lined with teenagers—and you cannot hurt it. Everything in my house is either really durable or slipcovered,” Jill says. The chair’s buffalo check fabric makes an eye-catching statement, while antlers from Frank, Jack, and Jill’s father-in-law’s hunting trips fill the walls for a personal touch. 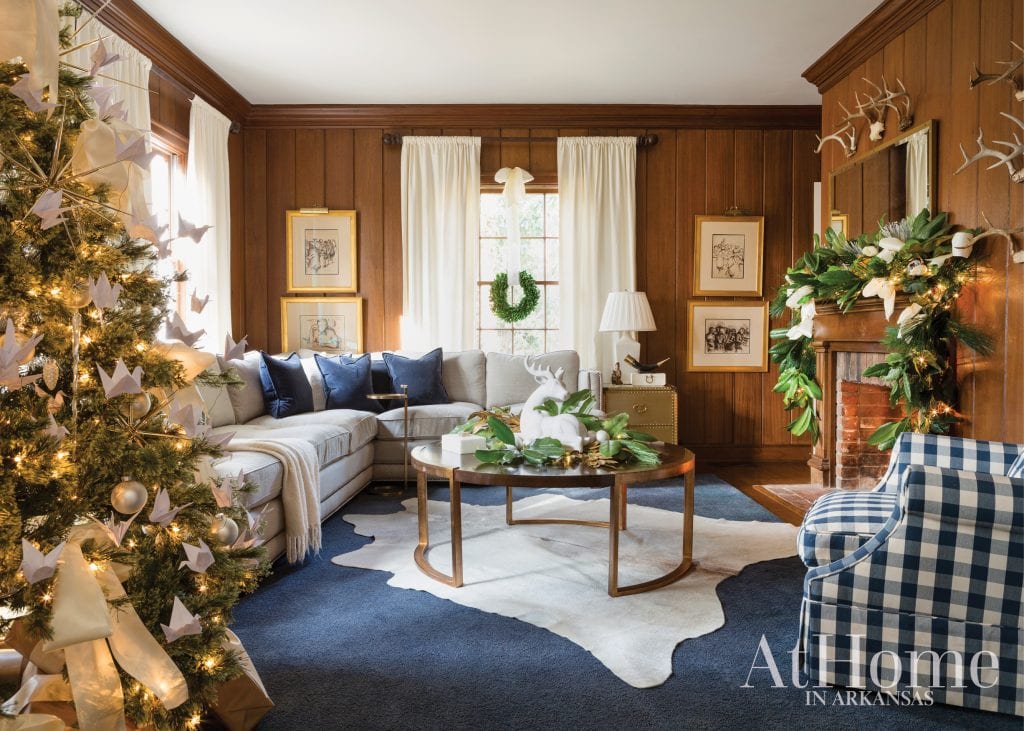 FLOCK TOGETHER
The family tree also evolves each year. For this rendition, Jill and her daughter, Caroline, crafted graceful, white origami birds. “Our tree is based on the origami tree in City Hall in San Francisco. I thought it was beautiful, and we decided to do our own version,” the designer says of the tree’s inspiration. “I have an ongoing laboratory for Christmas décor. I use the season to try out new things.” 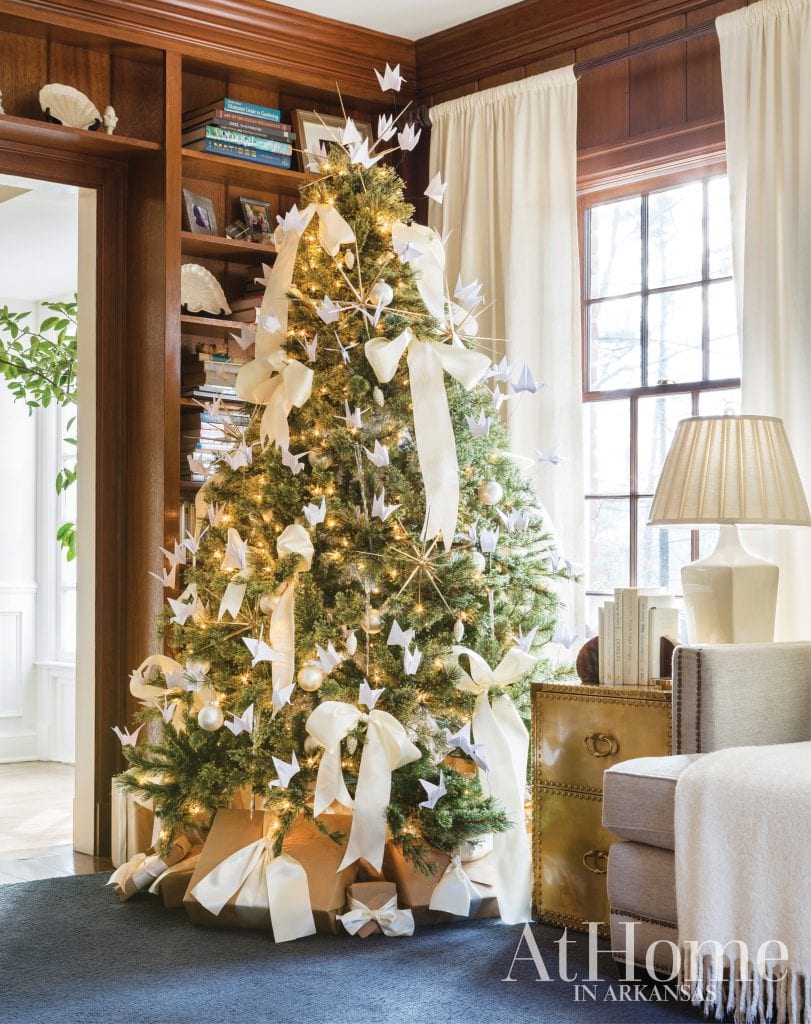 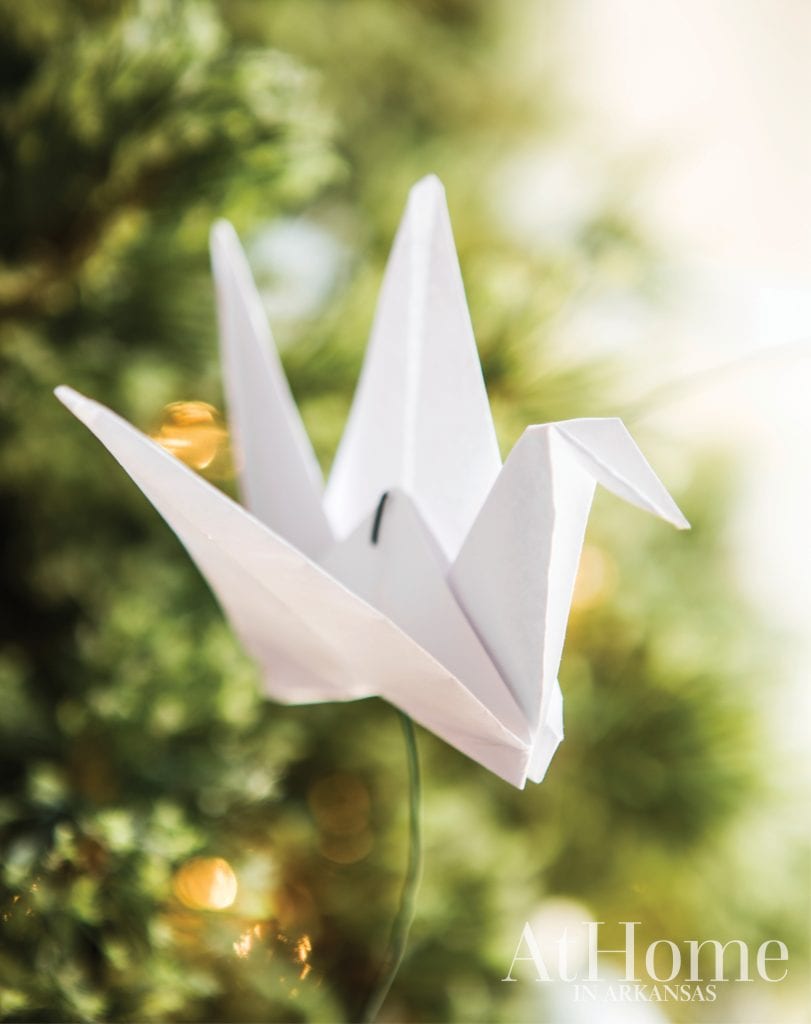 SEASONAL SIMPLICITY
Boxwood wreaths are a subtle, recurring element of the holiday décor that is seen throughout the home. Here, they grace the neutral-hued living room, adding an elegant and understated touch. A series of antique bird prints line the walls for an effect that feels almost like a wallcovering. “I like wallpapering with a series of prints so they run the whole room,” Jill notes. 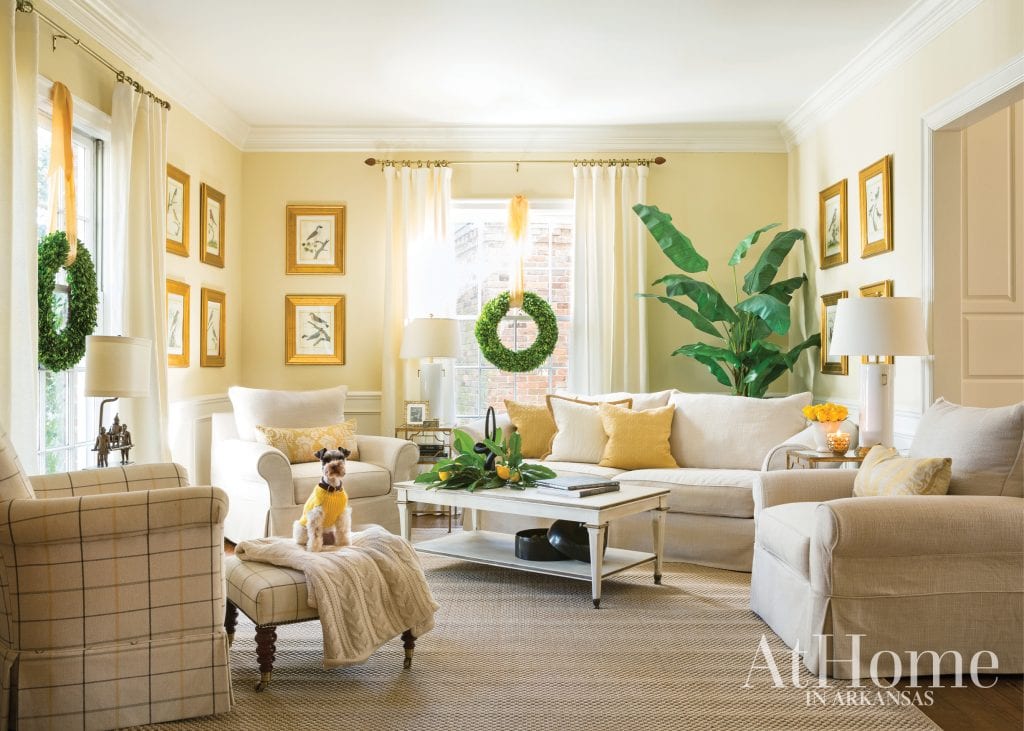 GRAND CENTRAL STATION
As with most houses, the Lawrences’ kitchen plays host to more than family meals. As Jill notes, she and Caroline have done “some serious cookie baking” in the space, but the countertops have also “seen their fair share of hot glue.” The spacious room was originally two areas, a galley-style kitchen and a breakfast nook. Upon moving in, the Lawrences gutted the space and combined the rooms to create this area and give the much-used kitchen an updated but still classic look. 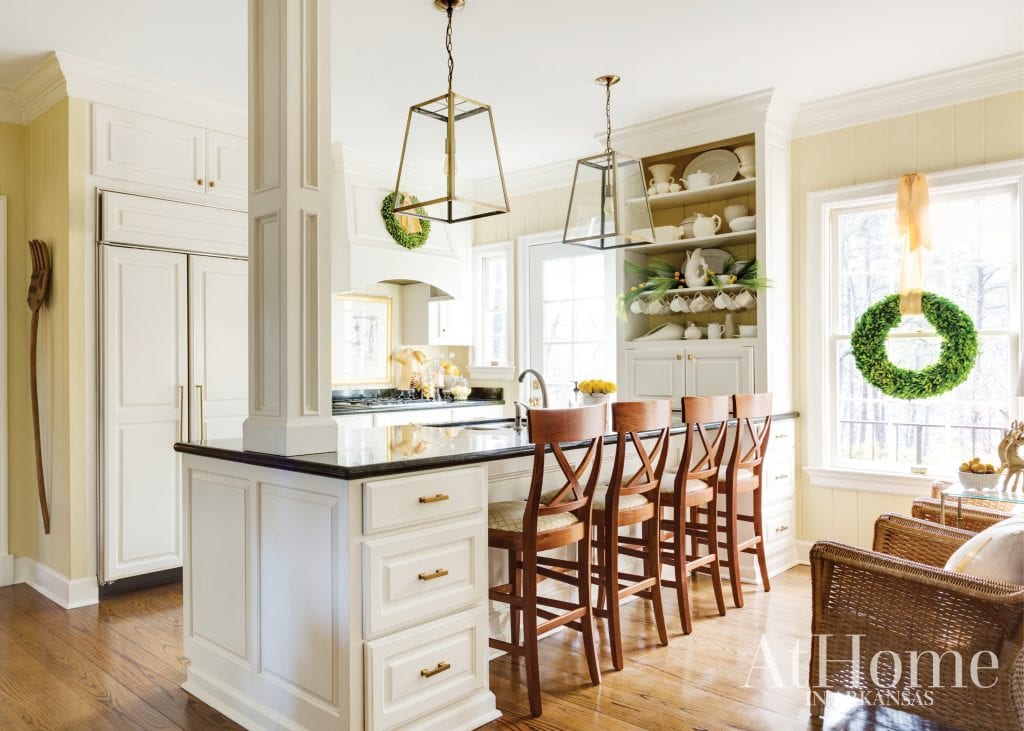 GET THE RECIPE
Ready to do “some serious cookie baking” of your own? Check our blog to get the recipe for Jill’s Mimi’s Molasses Sugar Cookies—a treasured treat originally created by her grandmother.