When Counts and Asa Morton began preparing to move in to their west Little Rock home after their marriage, they faced the inevitable design challenge of merging two established households with very different styles. They purchased a nearly completed spec home with copious windows, light limestone floors and an open, high-ceilinged layout, which seemed the perfect spot to embark on their life together. However, it was worlds away from both her quaint traditional home in St. Charles Place and his 1970s ranch-style abode in Pleasant Valley. 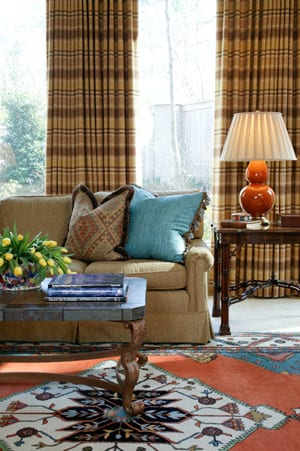 Now displayed in the family room, this kilim-style rug was one of the inspirations for the home’s coral and turquoise color scheme. 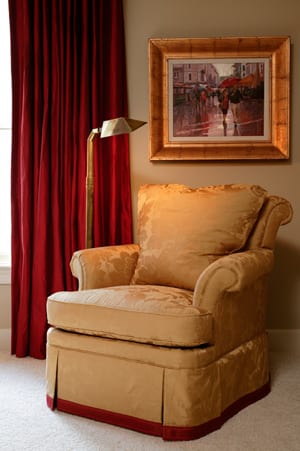 Crimson draperies add drama to this sitting area, especially when reinforced by crimson trim on the stately gold chair. 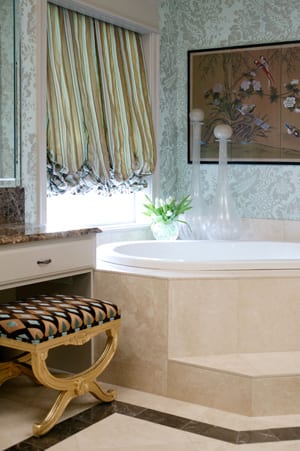 Pattern is a key element in the master bath, where tone-on-tone blue floral wallpaper is joined by striped draperies and geometric upholstery on the vanity stool.

To bridge this divide, the couple enlisted the services of interior designer Tobi Fairley and her team at T. Lamarr Interiors and Fine Art in Little Rock. Tobi tackled the project by looking first to the home’s architecture for her inspiration. “The open architecture really influenced the design, which is light and airy, with a basis in traditional elements,” she says. Working with Counts and Asa, she assessed each of their belongings to find pieces that had common colors and styles, finally settling upon an overall color palette in tones of coral and aqua. “The palette is really based on a Chinese rug that Asa owned, which is now in the dining room, and a kilim-style rug that Counts owned, which we put in the family room,” she says.

Tobi chose new furnishings on a larger scale for the living and dining rooms, which were more appropriate for the home’s high ceilings and grand, curved staircase, while existing pieces were reserved for more private areas. To bring all the elements together, she chose upholstery fabrics from the same family of colors. “We used a lot of fabric,” Tobi says. “I love drapery, and it was the perfect unifying element to blend their belongings and create a cohesive look.”

Further bringing the spaces together is the art collection that Counts and Asa began together. Although they both had purchased a few important pieces separately, neither had really focused on building a collection, which became a true joint venture. “Art was the perfect way to bring their relationship together and make this home something that represented them as a new couple,” Tobi says. They began by searching for a prominent piece to display above the fireplace in the formal living room, eventually commissioning an impressionist-style painting from Barry Thomas. The process was so rewarding that the Mortons now have several of his works throughout the home.

The work of Arden Boyce, a longtime friend of Counts’, seemed the natural next step for the collection, and they commissioned a series of Conté pencil drawings for the dining room. “Oil paintings were too heavy for the space,” Tobi says, “and we felt that to have a more well-rounded collection they needed to add some works on paper.” Although the design of the home is complete, the art collection remains a work in progress, with several spots waiting to be filled. “The next purchase is going to be a Sheila Cotton painting that they have been admiring for quite some time,” Tobi says.

For the designer, the rewards of working on this space continue to grow. “It was interesting to see how they worked together, with my guidance, to find the right balance of feminine and masculine, traditional and contemporary, formal and casual to create a style that represented them as a couple, rather than as individuals,” Tobi says.