Employing transitional style with a coastal flair, designer Ashley Brewer helps a Marion family get the most from their home 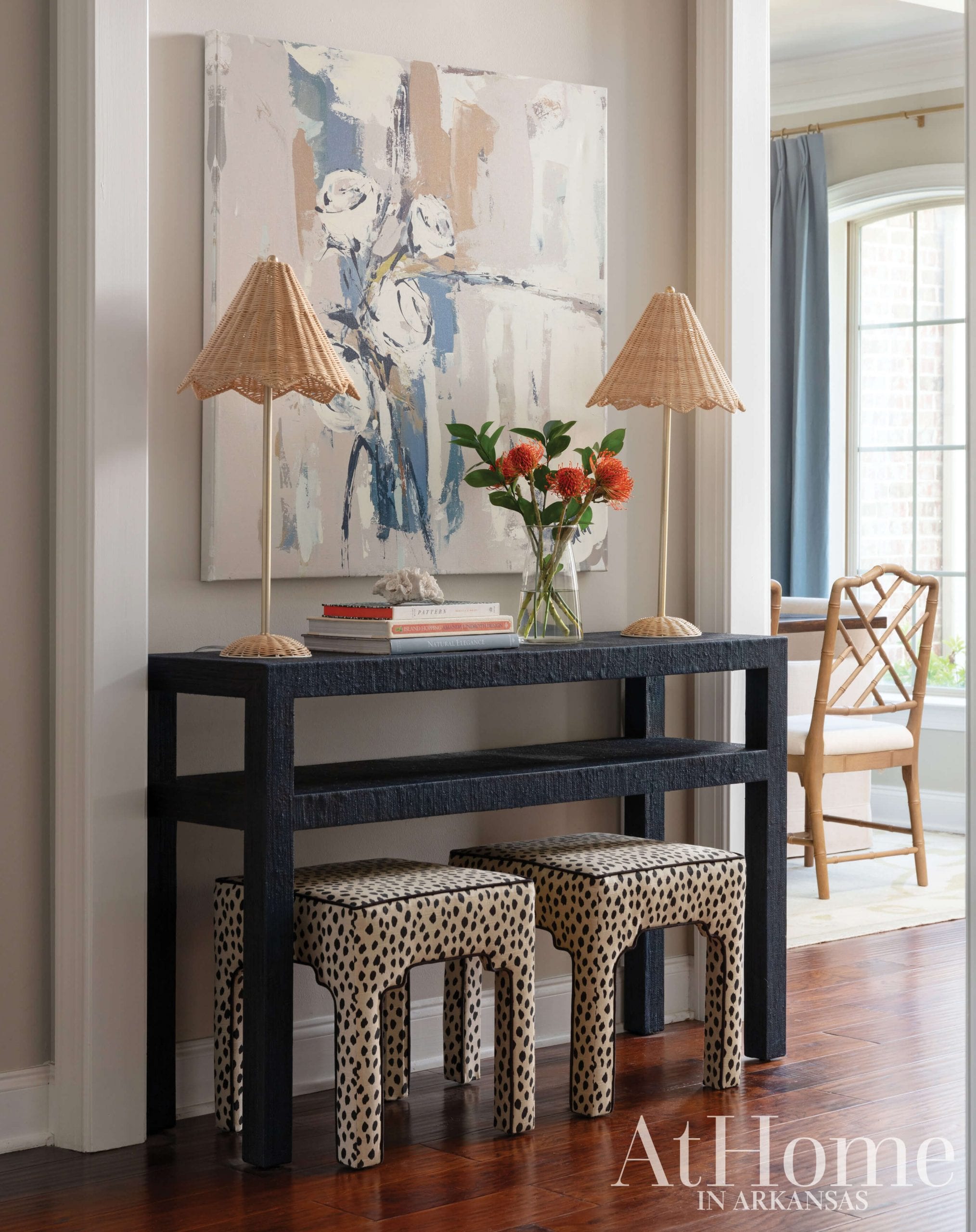 When Brittney and Alex Dean bought their home in Marion eight years ago, they knew they’d found the one. “We loved the bones, the size for just starting a family, and the location,” Brittney says, noting both its proximity to nearby Memphis and friends in the neighborhood. However, the house seemed to shrink as their two children reached late elementary school, prompting the desire for more space without making a move. In 2020, as the family found themselves together more than ever, they decided it was time for changes that would make the most of their cherished home. Enter Ashley Brewer, a longtime friend who had recently launched her interior design business.

Ashley advised the Deans to consider their home improvements holistically. “I always tell clients, let’s have a bigger plan. Even if you just want to start with this one area, what do you see changing in the next two, three, or four years?” Ashley says. For the Deans, the big picture included more living space where they could all be together. “Their existing living room was really tight for a family of four. You had to be sitting on the couch to see the TV above the fireplace,” the designer recalls. “We wanted to create a space that was more airy and open—big enough for more seating, but also a room where the kids can pile on the floor.” With the help of Michael Rushing Construction, they reimagined a screened-in porch off the living area by fully enclosing it (and enlarging its footprint) to create a spacious family room.

From there, Ashley worked with the couple to refresh paint colors, lighting, and furnishings throughout the house to better reflect their style, which Brittney describes as “a mix of coastal and traditional.” “I wanted an environment that feels crisp and clean, but also where you’re not scared to crawl up on the couch and relax,” she says. To achieve this, Ashley drew inspiration from pieces the family already owned, including the neutral living room sofa and blue- and green-hued artwork. “She has such great taste, I didn’t have to do a lot of convincing,” Ashley says. The result is a home that offers enough space for the whole crew as well as a cohesive, livable style. 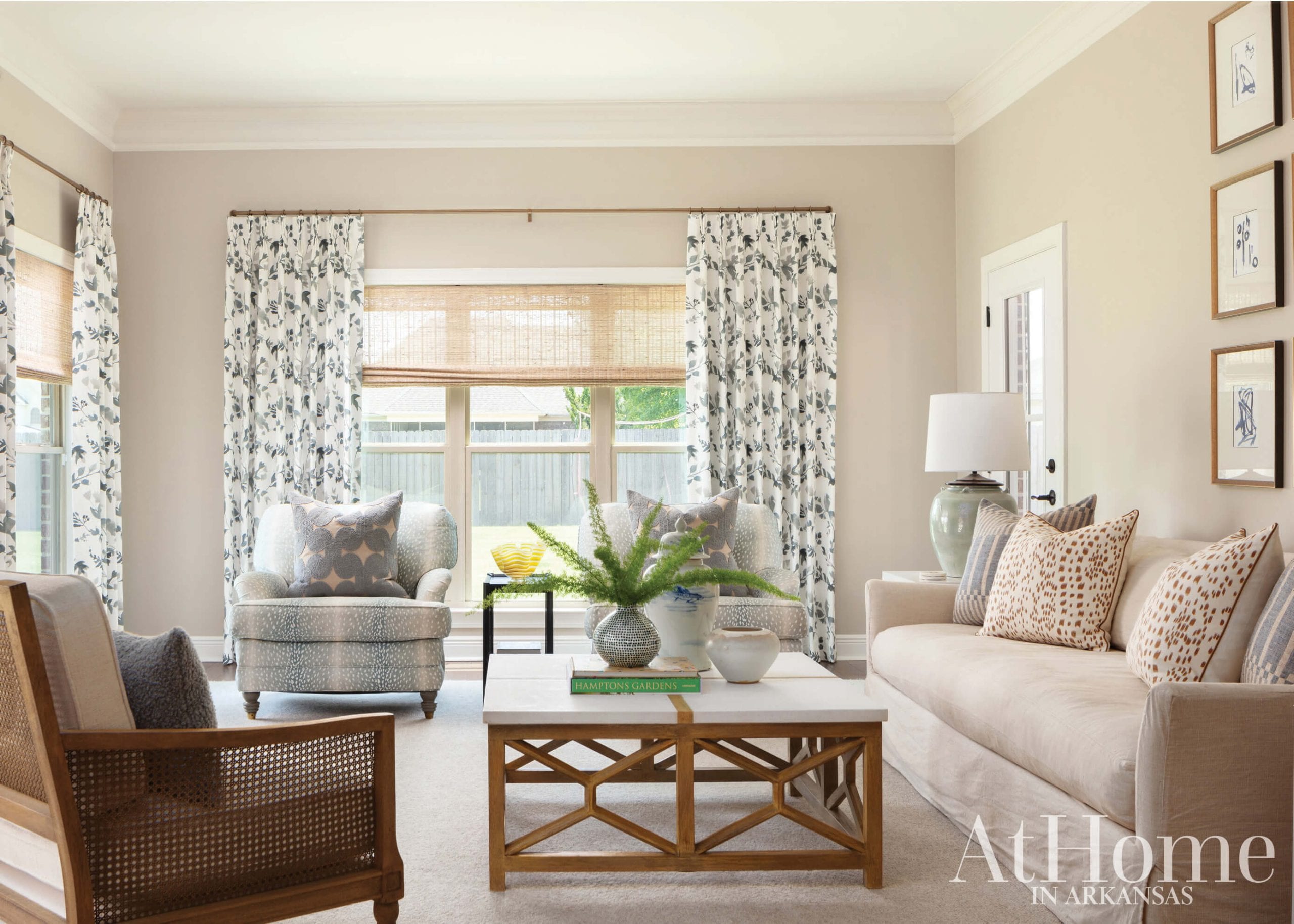 CALMING SCENE
In the family room addition, breezy blues and sandy neutrals reflect the sense of serenity that draws Brittney to coastal style. The sofa is covered in performance fabric for peak practicality, and patterns mix playfully on upholstered chairs, pillows, and drapes. Over the sofa, Ashley arranged a series of framed abstracts for a traditional take on contemporary art. 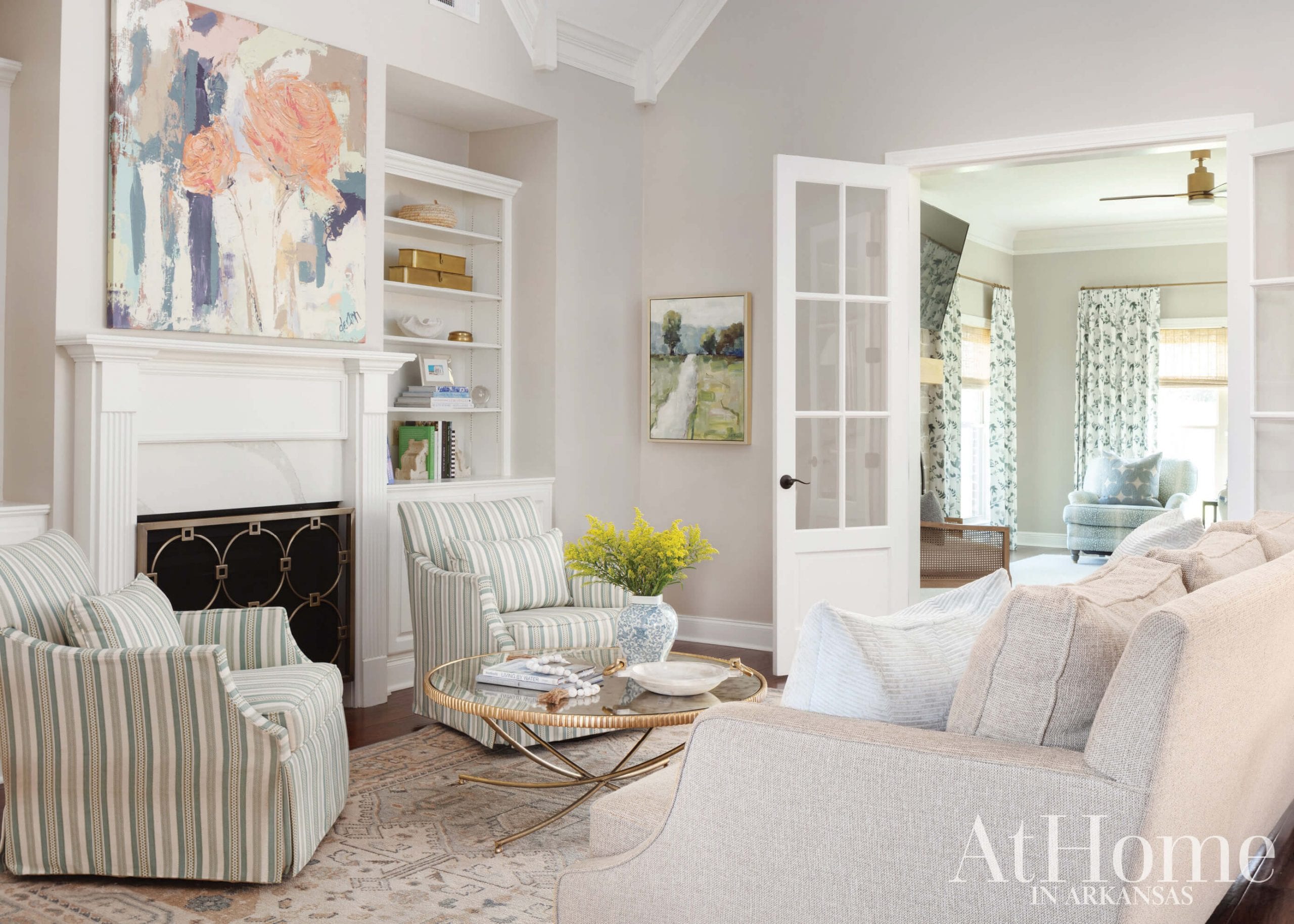 CASUAL REMIX
Relocating the TV to the family room allowed for an artful focal point over the mantel: a giclée by Nashville painter DeAnn Hebert, one of Brittney’s favorite artists. The fireplace surround was replaced with a fresh white quartz, and Ashley selected the rug and striped swivel chairs to coordinate with the new addition’s furnishings that are visible through a pair of French doors. 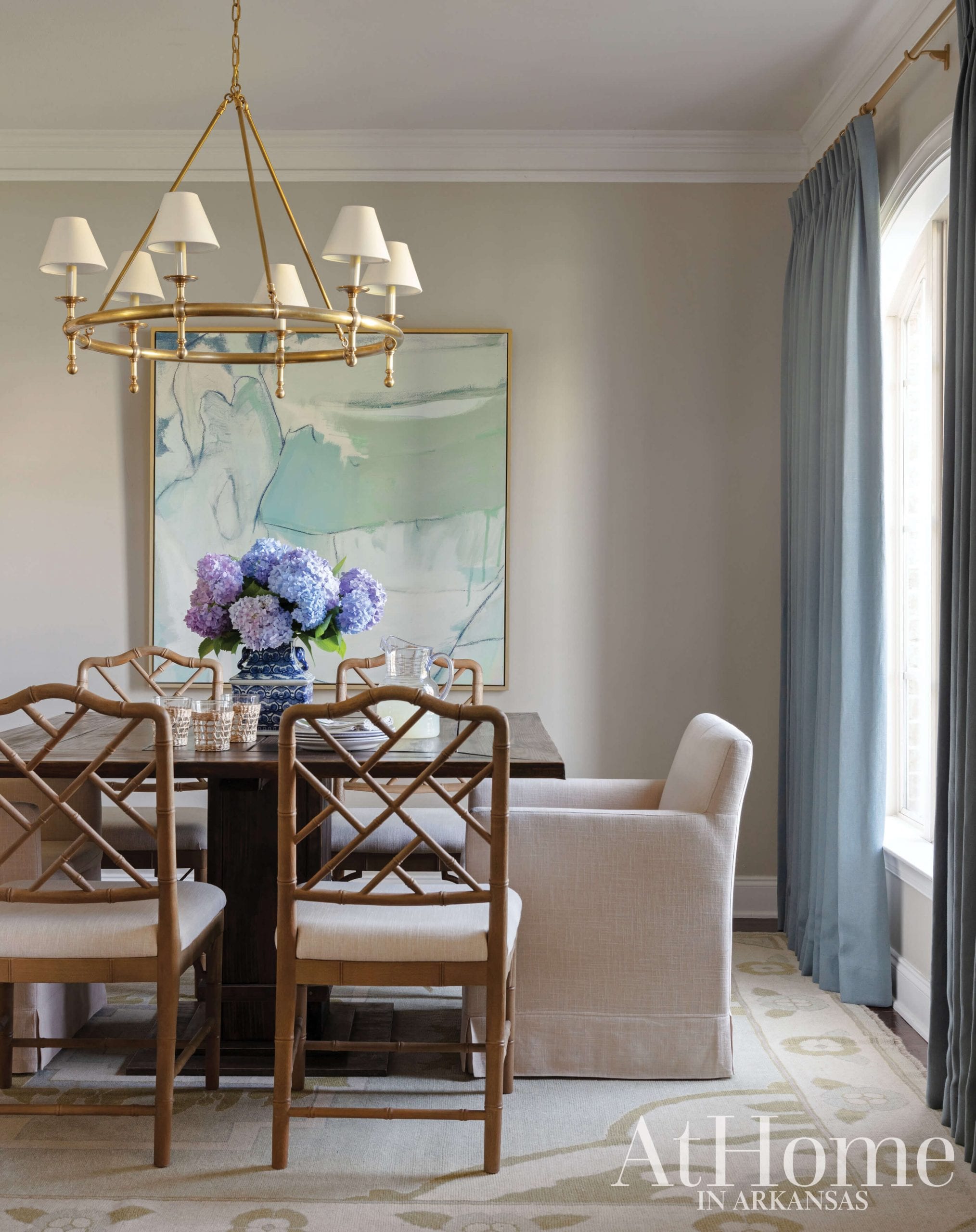 FEELING FRESH
A custom wood dining table with seating for six was one of the first pieces the Deans bought for the home. At first a practical purchase, the table is now sentimental, which Ashley embraced. “I think it’s so important for people to use things that are special to their family,”she says. She finished the dining room’s design with an Oushak rug, linen Schumacher drapes, and a Visual Comfort chandelier. 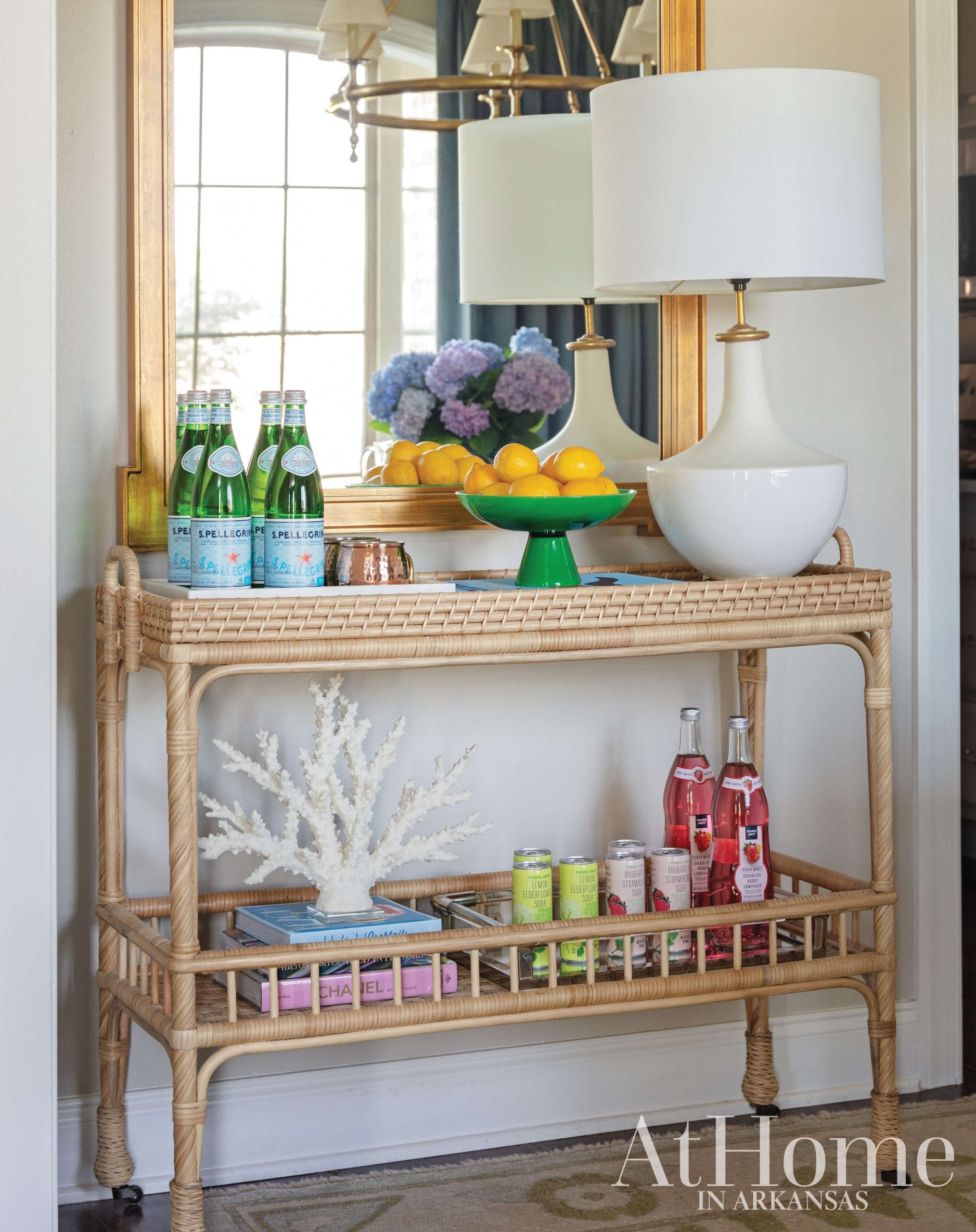 A rattan bar cart (that sits opposite the dining room window) and piece of coral hint at the home’s seaside influence. 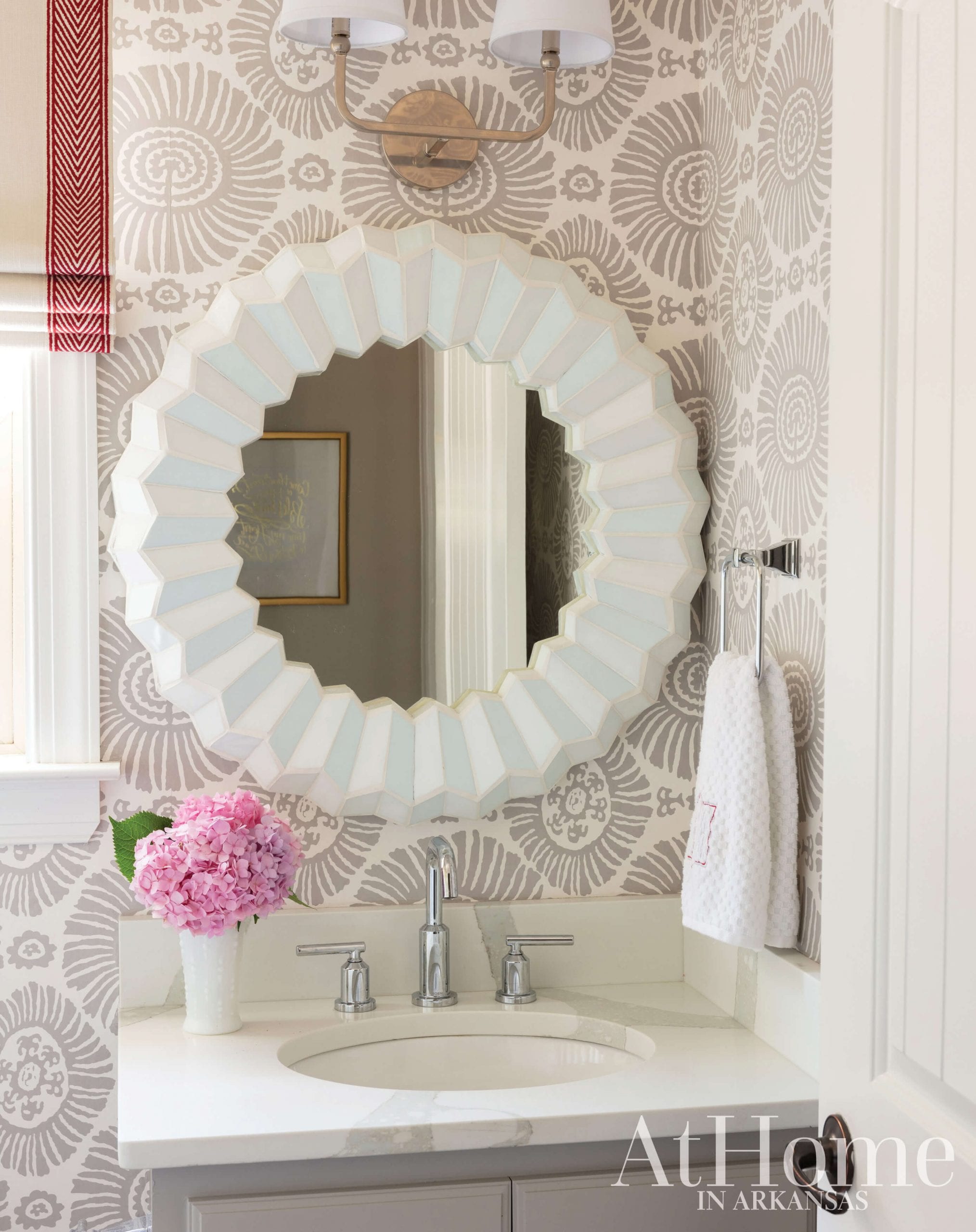 ROOM FOR WHIMSY
After cosmetic updates in the kitchen the Deans found themselves with a small piece of leftover quartz, which they used to upgrade the downstairs bathroom. “That led to the faucet, which led to the wallpaper (Thibaut’s ‘Solis’), which led to the custom Roman shade,” Ashley laughs. A red tape on the window covering (and a coordinating shower curtain) brings an unexpected punch of color to a home filled with cooler tones. 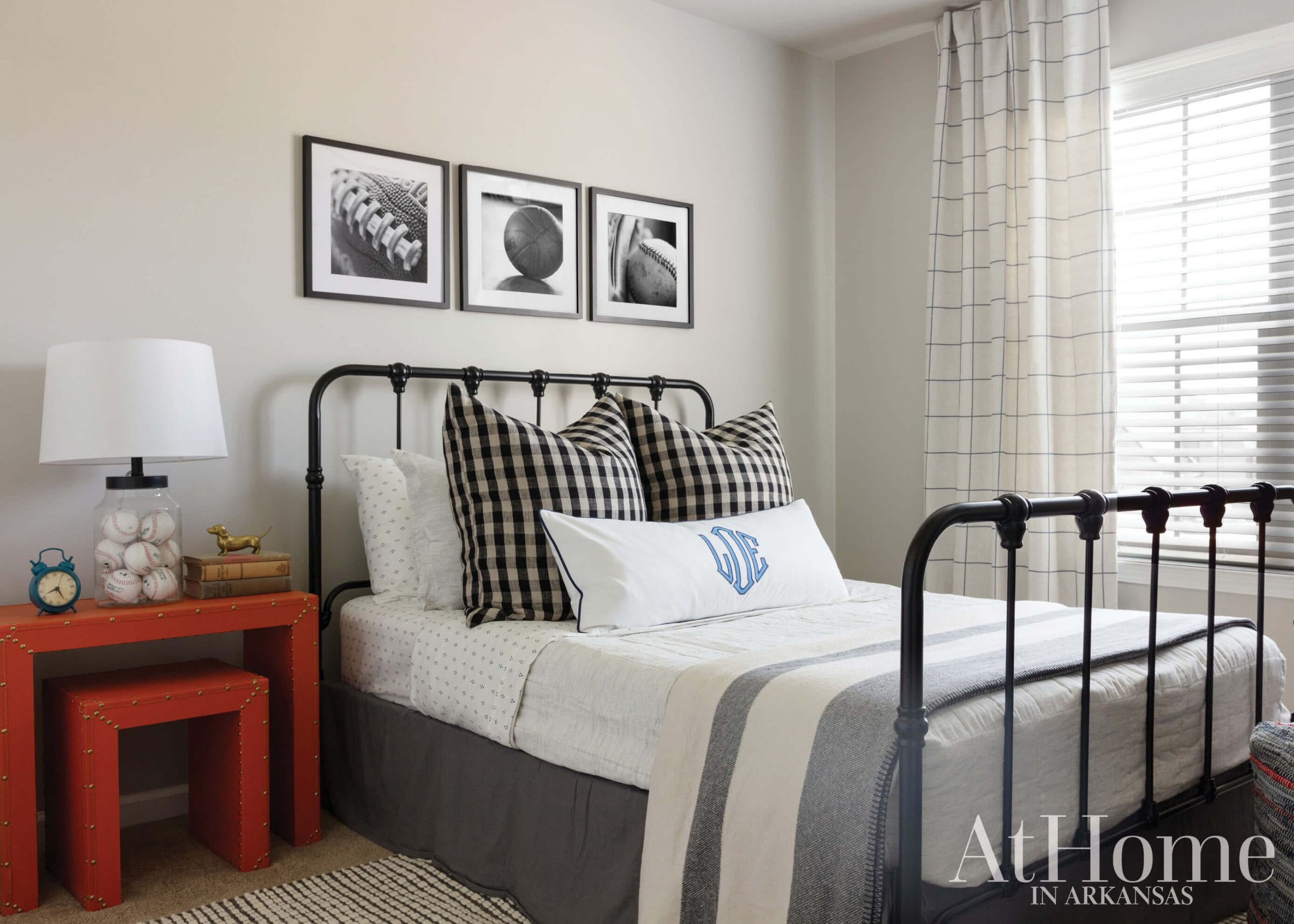 A GOOD SPORT
A tailored aesthetic with athletic-inspired accessories transpired in 9-year-old Layton’s room. “We gave it a more mature palette and kept it simple so it’s something he could enjoy over time,” Ashley says. She created the lamp using a customizable base and a bucket of baseballs. 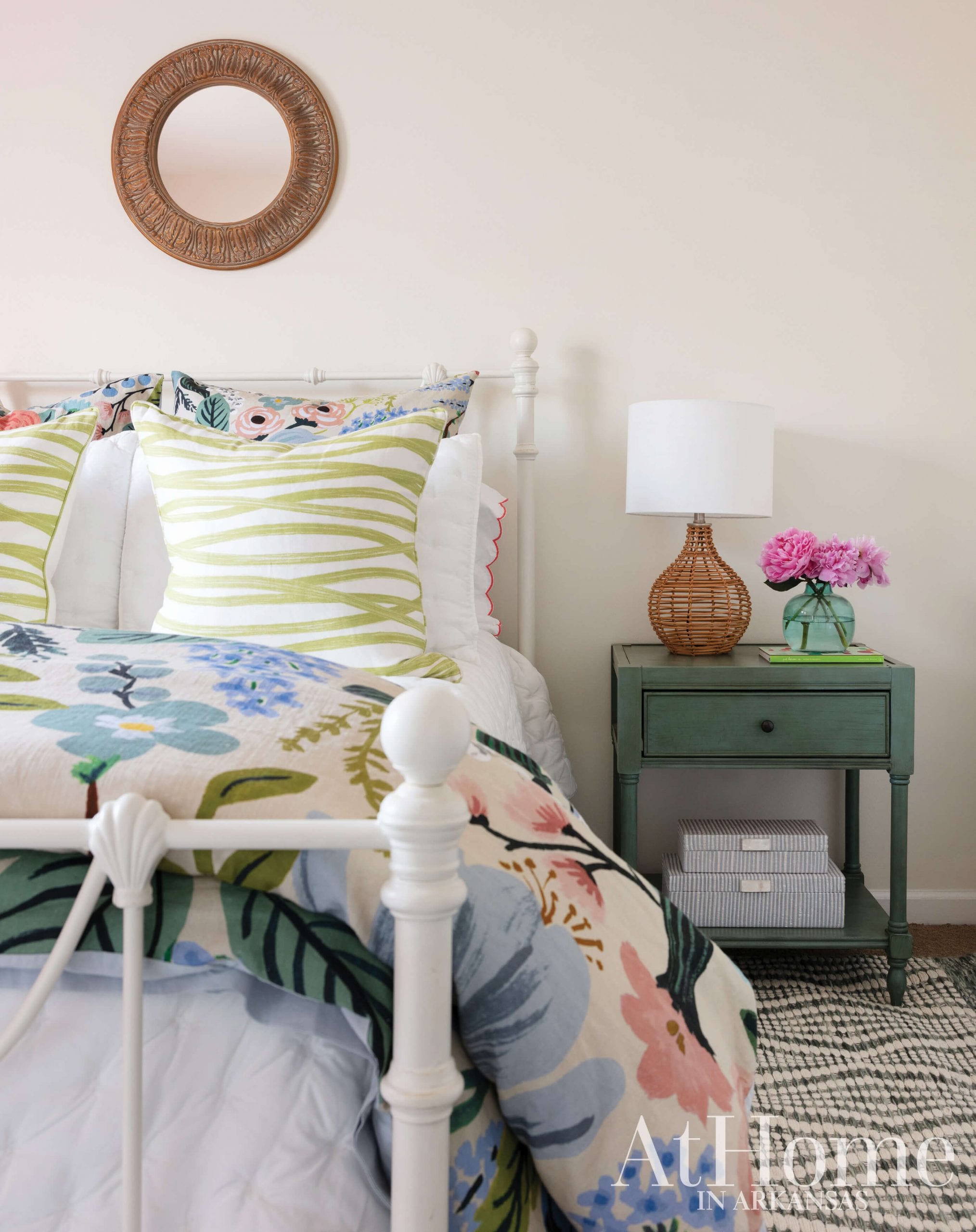 GIRLISH CHIC
Eleven-year-old Ava Claire was given free rein to make her room her own, and right away she selected a bedspread and shams fromRifle Paper Co.’s collaboration with Anthropologie. “She’s at that age where she’s expressing her individuality and knows what she likes,” her mother says. Ashley pulled blue and green accent colors from the floral pattern to finish out the preteen’s stylish space.