At Home in Arkansas:

What were your main design strategies for this family home in Conway?

The homeowners love the outdoors—every room has access to the outside and there are walls of windows. Because one of the stabilizers for this family of six is orderliness, I didn’t use a lot of accessories and little things. It was more about textures, and I kept the scale large because the sky and the trees are part of the background through windows in every space.

AHIA: How did color factor in?

BC: The house was custom built, and when I came on the scene two years later, all of the colors were monochromatic. The first space I designed was the wife’s closet. We went all out with red and pink, and made it completely girly. She and her husband loved the color, so we slowly started adding it in other places, including an orange Venetian plaster finish on a wall in the living room.

AHIA: Orange and blue were bold choices in that living space.

BC: There was already blue tile in the kitchen. I thought orange would be a great complement to it and the browns throughout the home. I didn’t use a lot of black so brown was my way of adding weight in each space. Those three colors—blue, orange and brown—were our base. 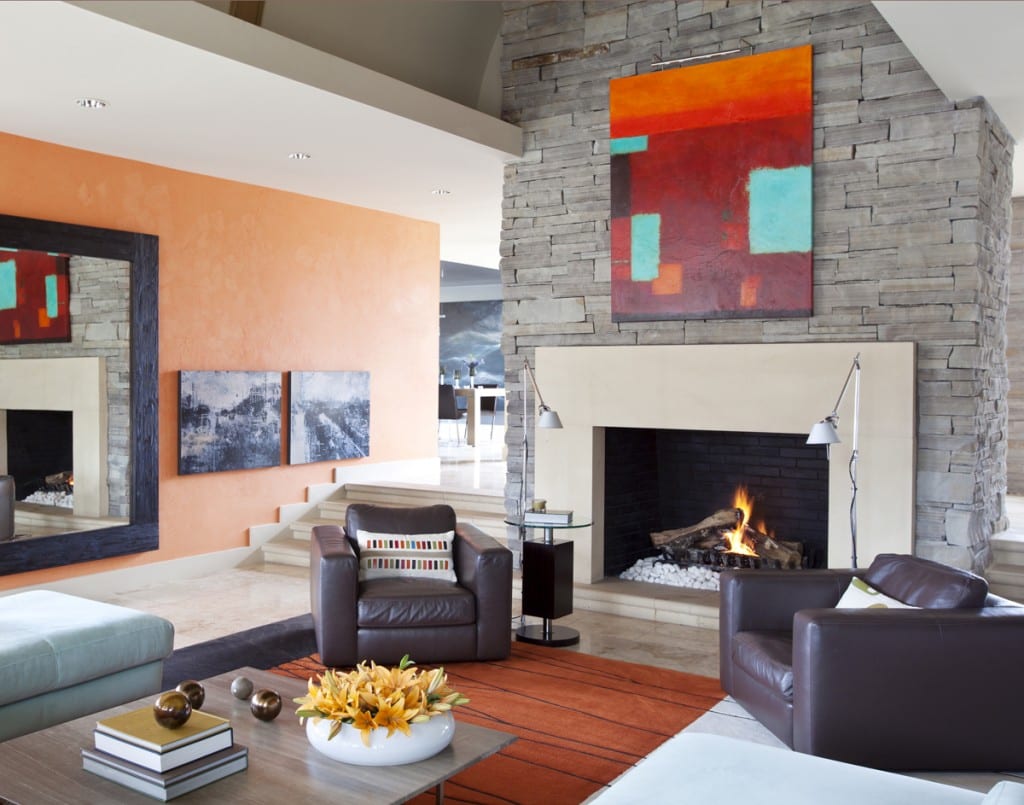 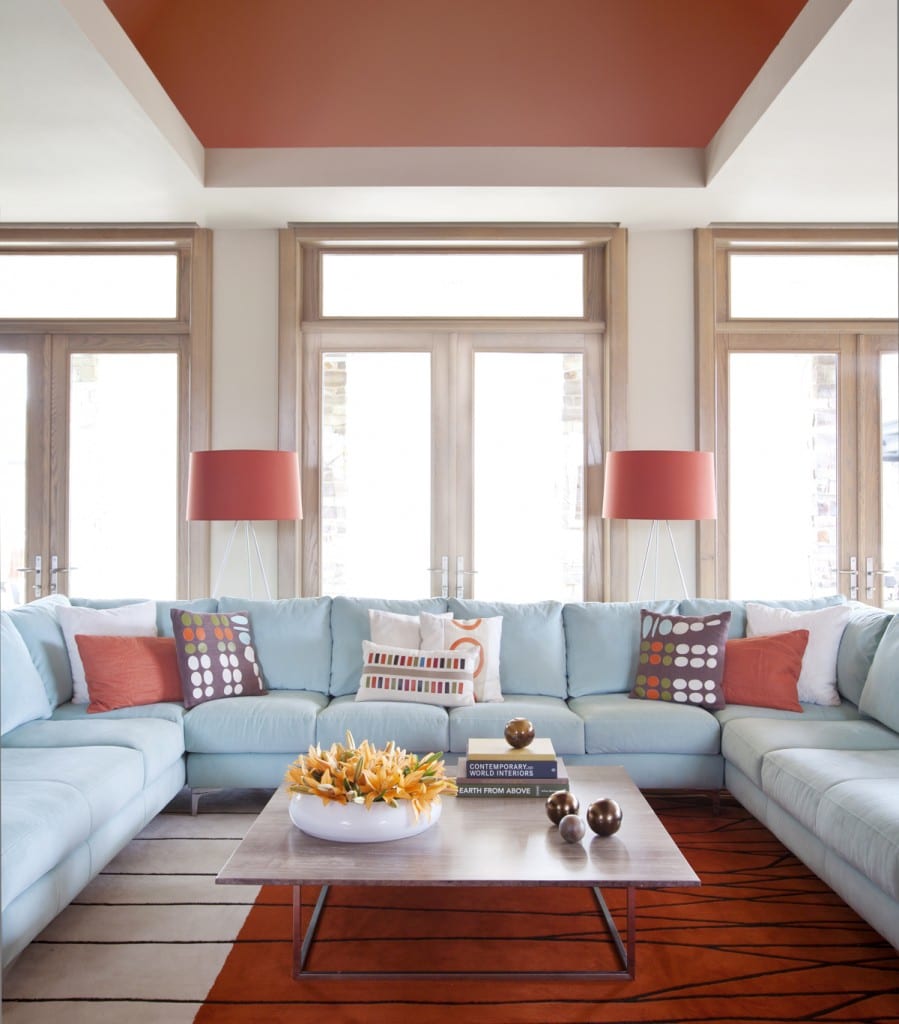 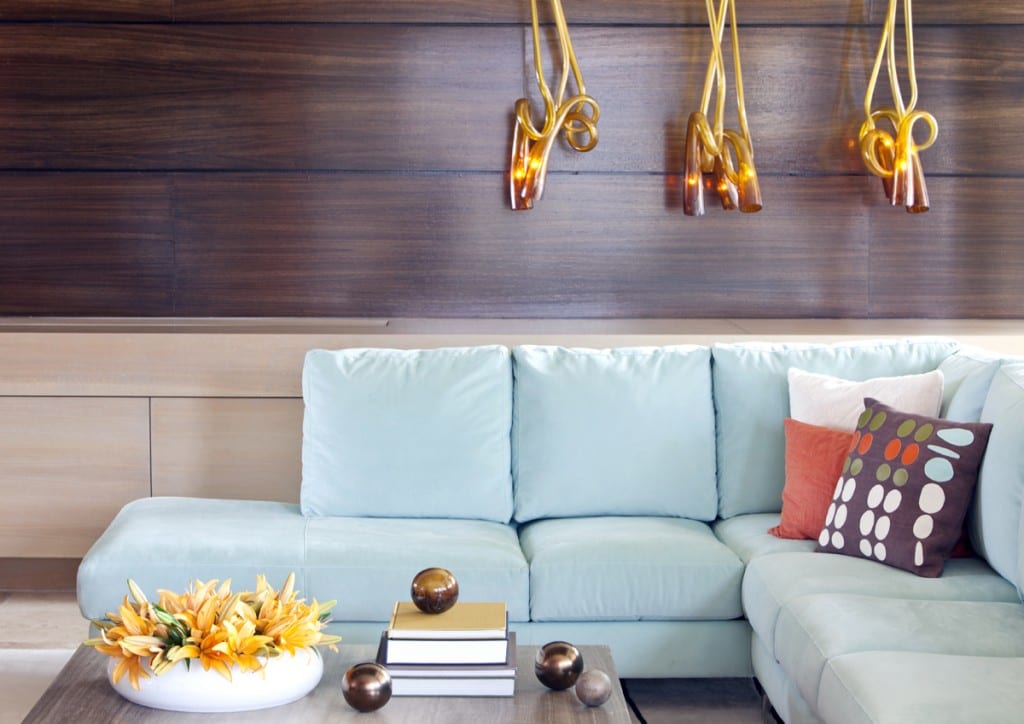 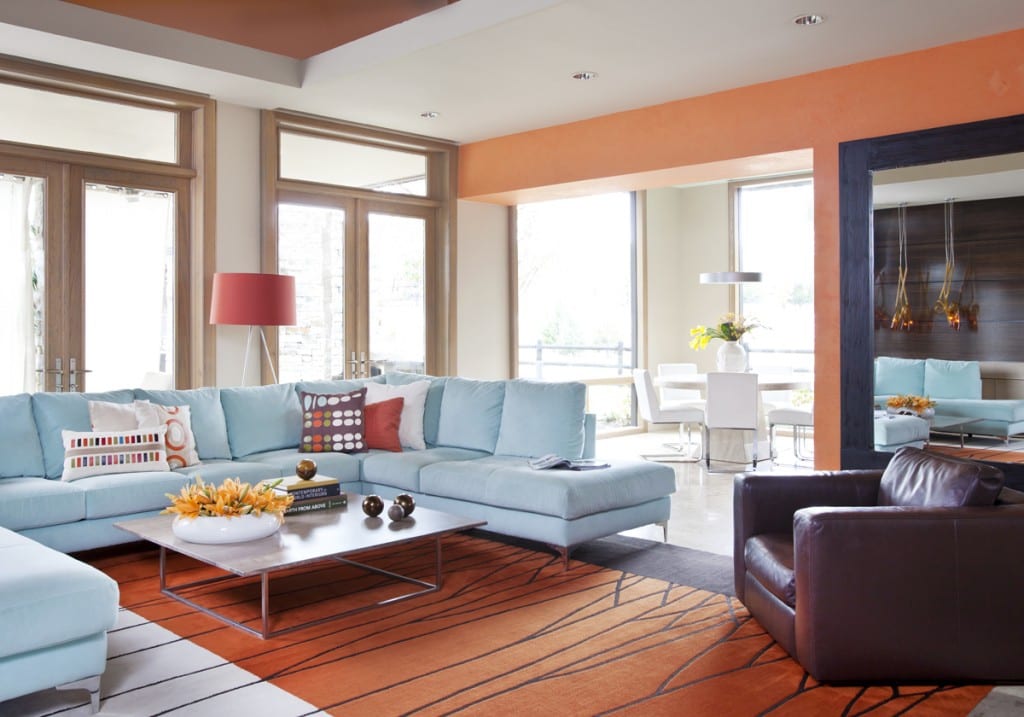 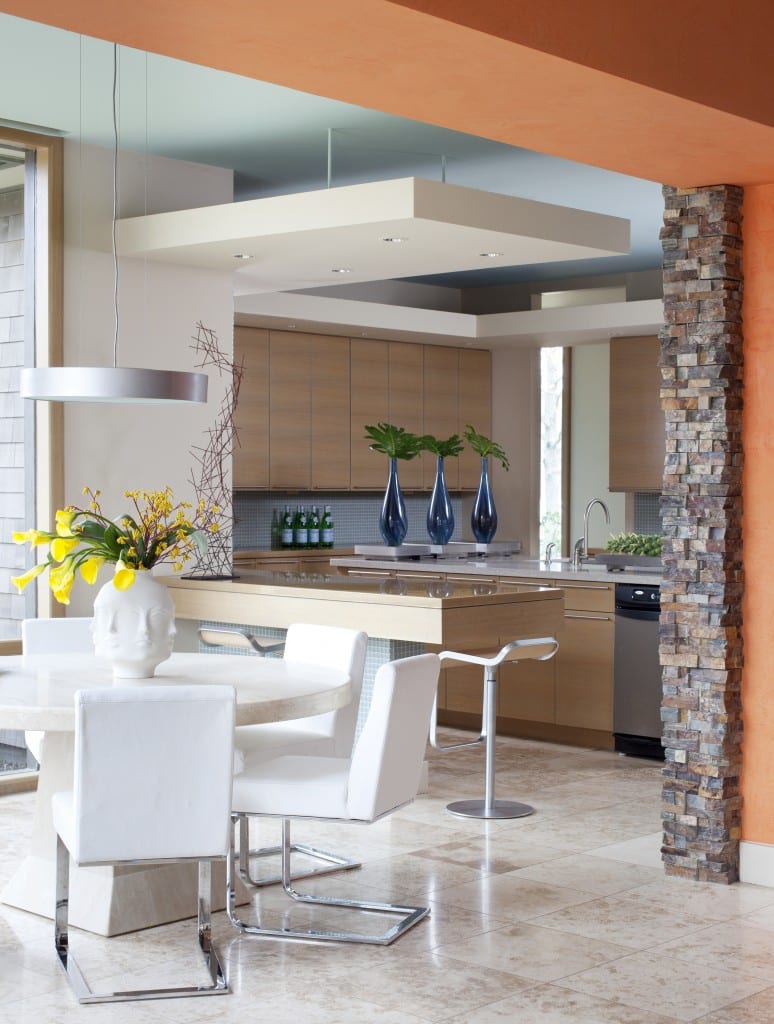 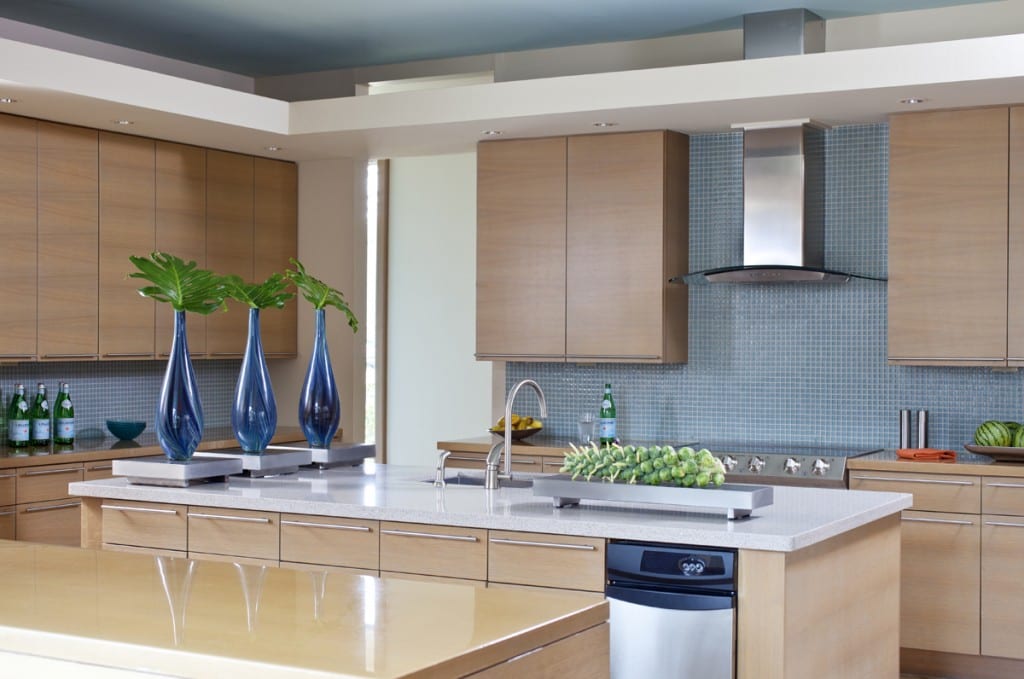 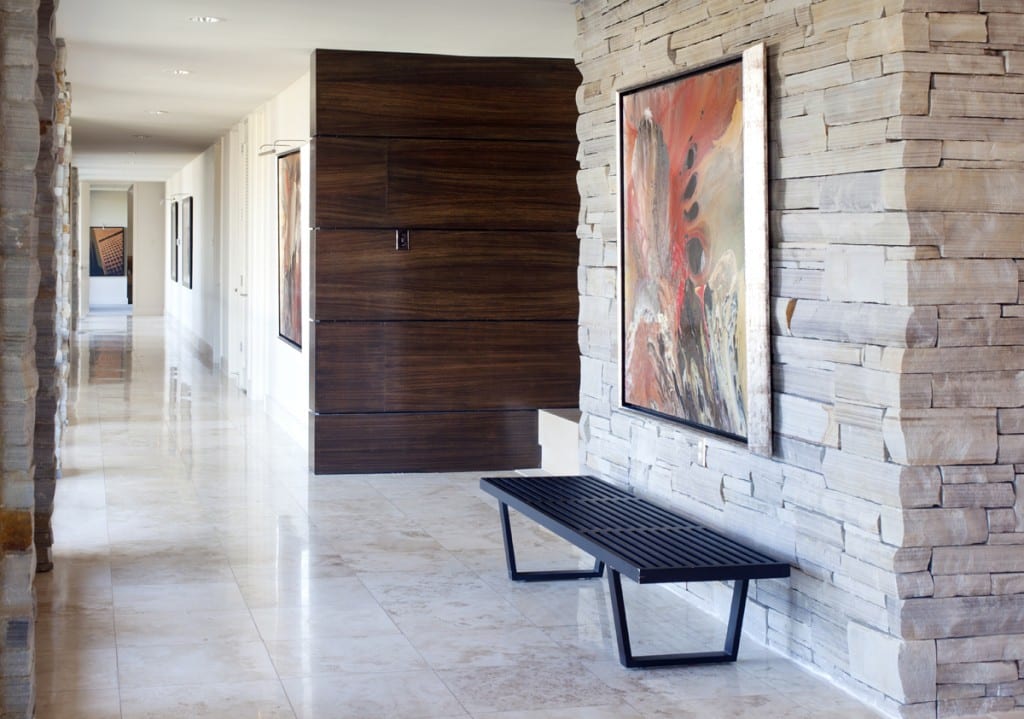 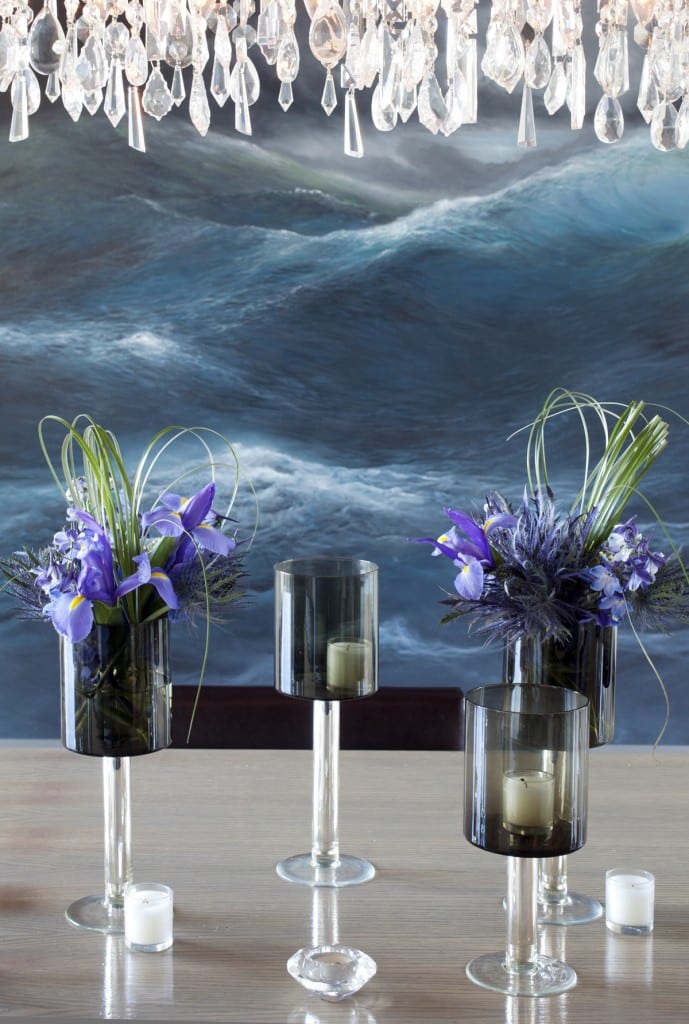 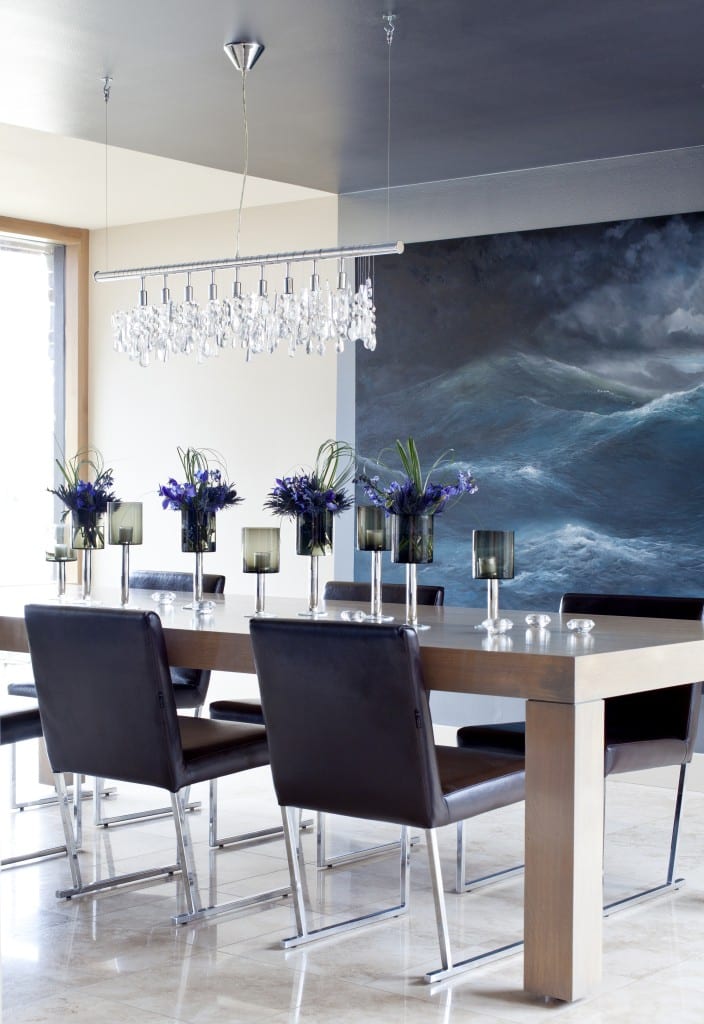 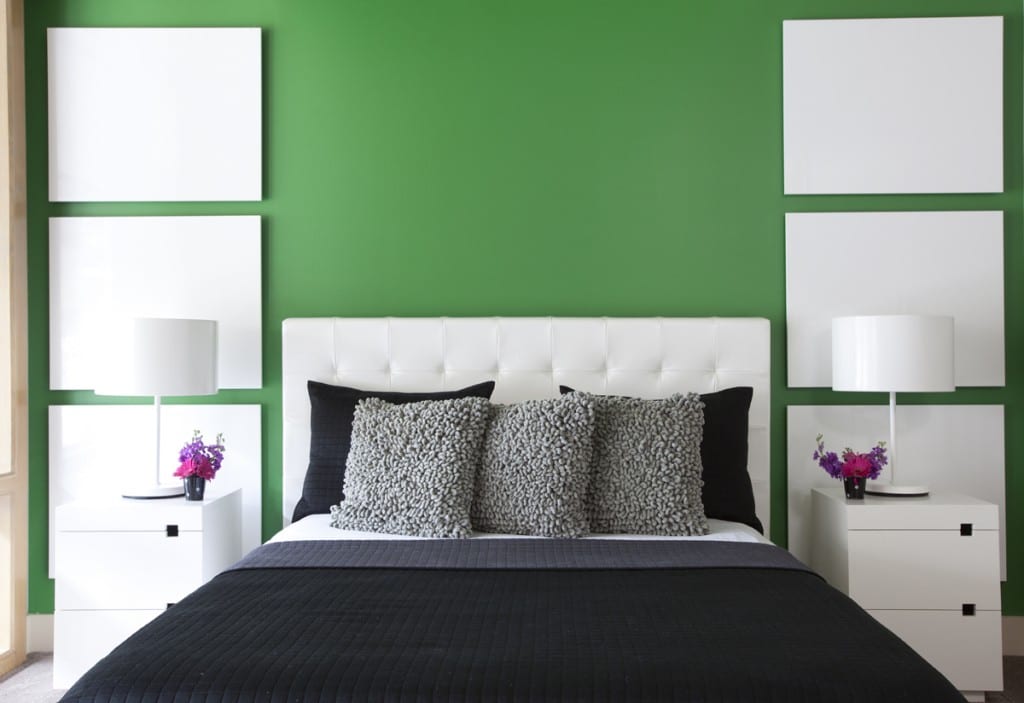 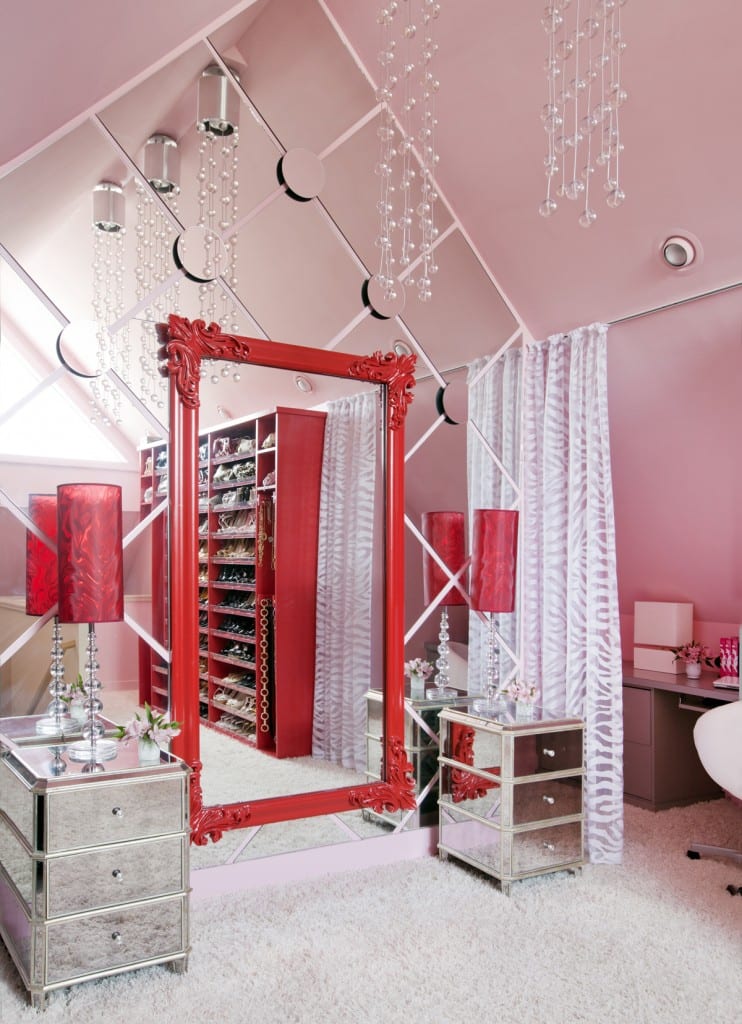 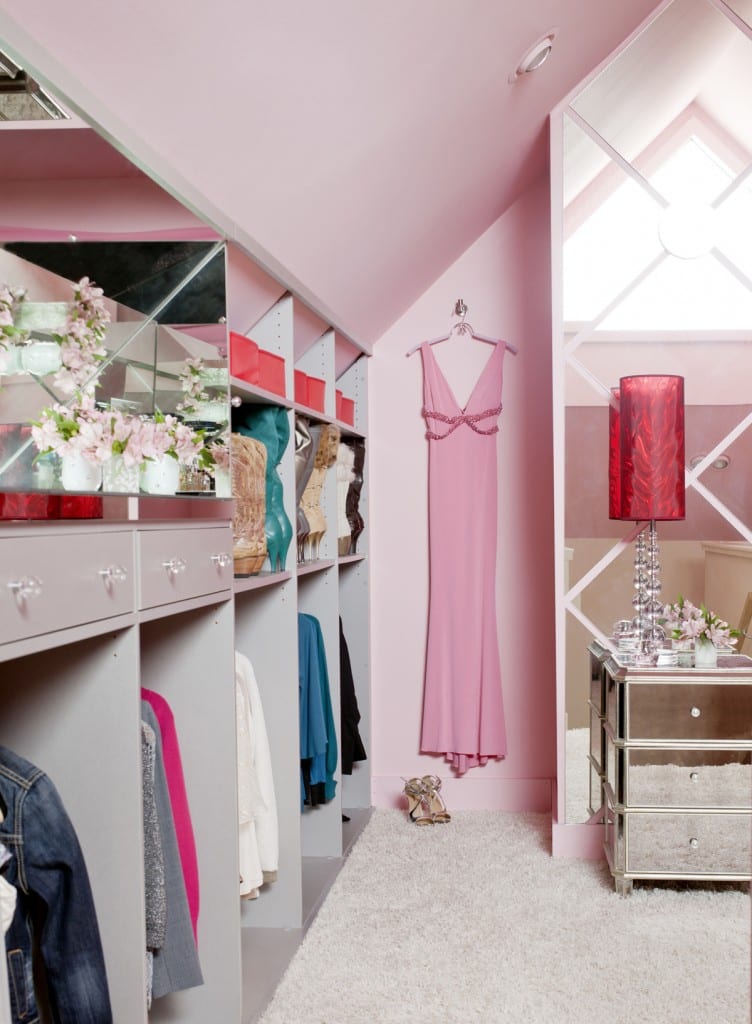 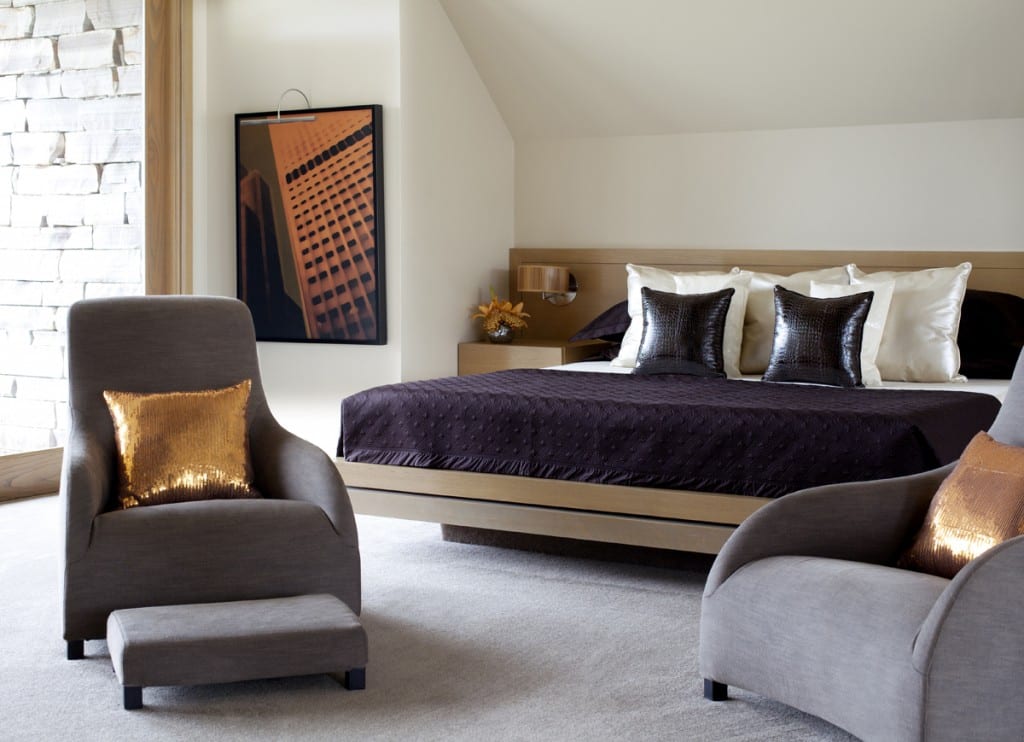 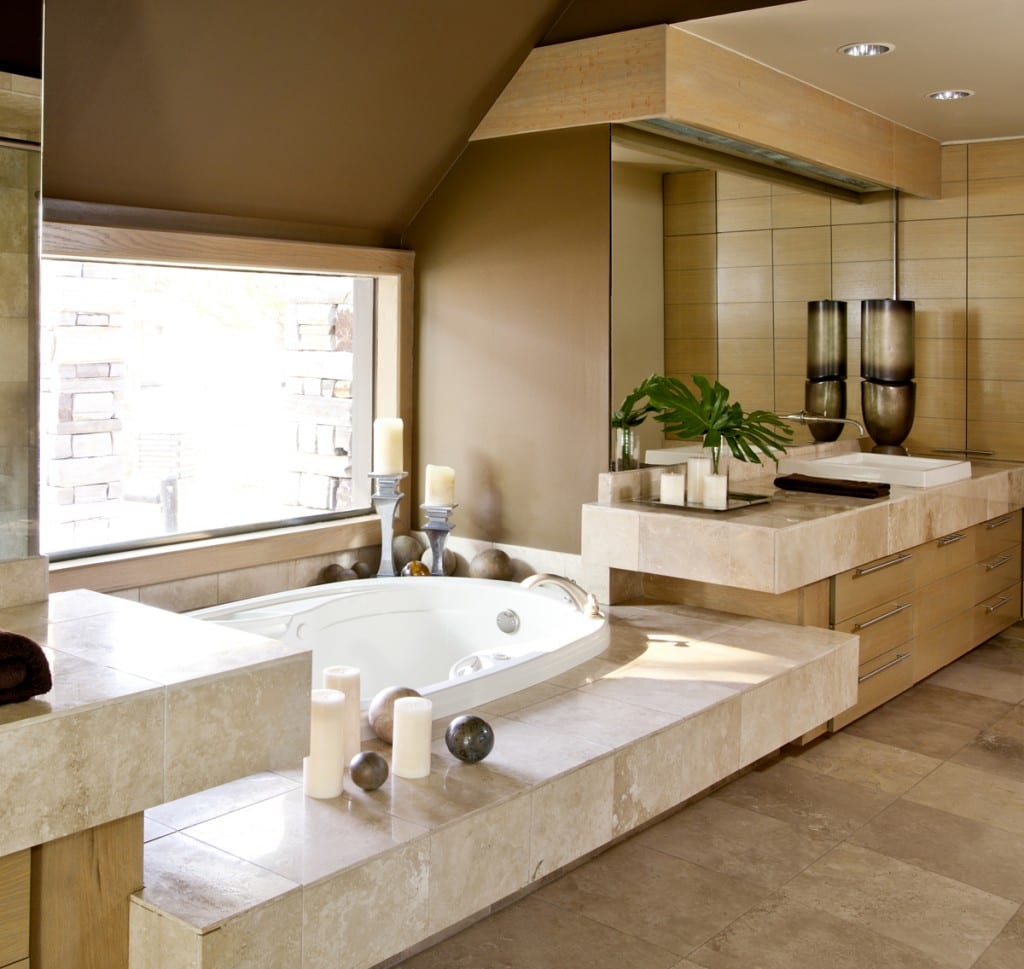 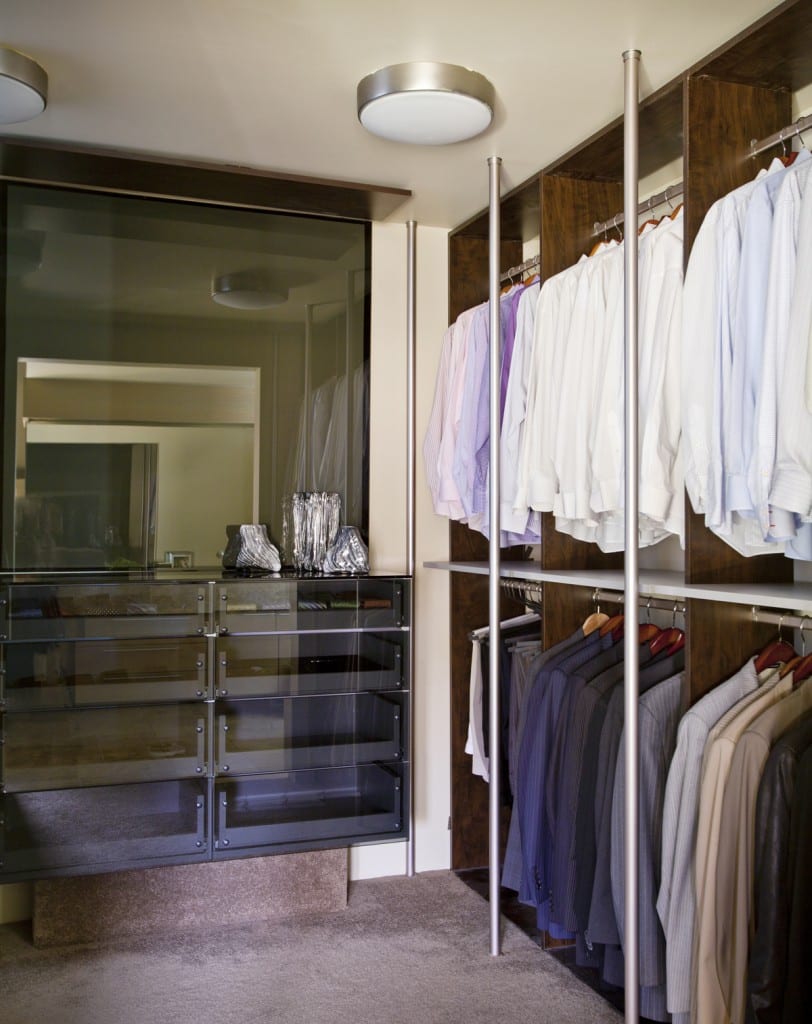 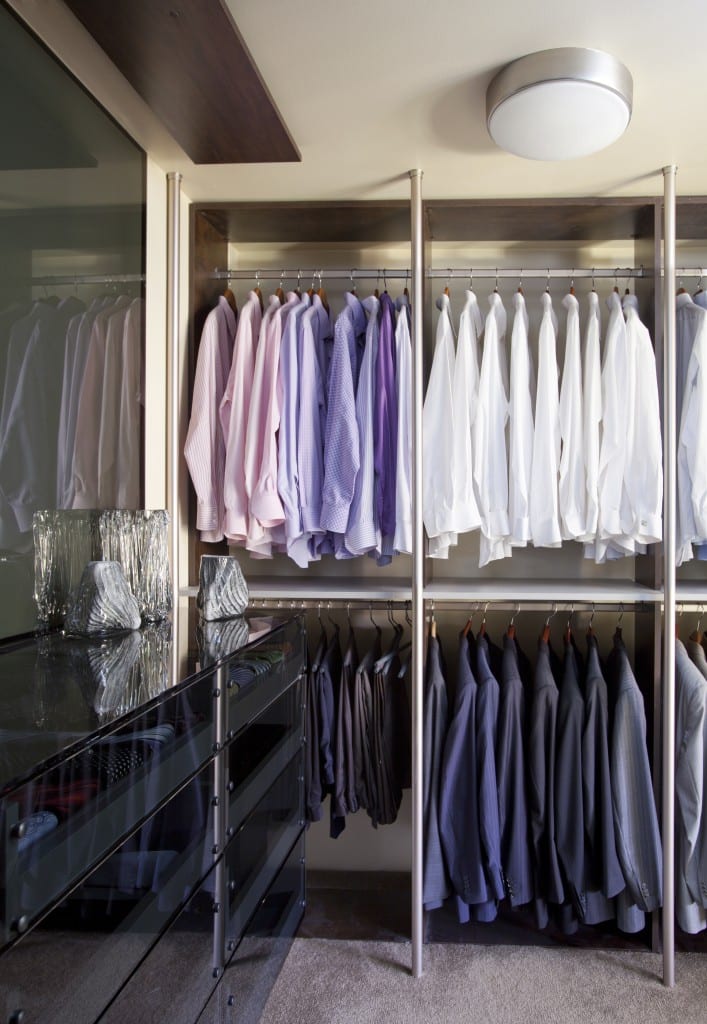 AHIA: Was an ideal mix of warm and cool tones difficult to achieve?

BC: I think it’s modern to mix. Traditional styles use one or the other, while modern styles allow you to break some of those rules. To me it goes to Frank Lloyd Wright—he was very modern but loved nature. All the cabinetry and doors are rift-cut oak, which has cool gray and warm gold tones. In nature, that mixture is very common.

AHIA: Tell us how you added drama to the dining room.

BC: The first thought was to wrap the room with a color that went up the walls and across the ceiling. We considered a wood treatment but decided on a metallic gray stripe and art to fill the space. We commissioned Eric Maurus to create art specifically for this room. The homeowners love water and liked the idea of a storm at sea, which is very dramatic. We also loved the shape of the light fixture, which added a touch of glamour and drama because it’s unexpected.

AHIA: The beauty of the master bedroom is in its simplicity.

BC: The bed is built-in, so there weren’t a lot of options as far as rearranging. The master has a beautiful fireplace wall, which the bed faces, and both sides are completely open to the outdoors. The architecture of the room is what makes the space really unique.

AHIA: It’s clear that the master closets weren’t an afterthought.

BC: Both closets were by Closet Factory. In his, we had gray glass installed for texture on the walls and door fronts, which created a reflective, monochromatic look. In her closet, we added round mirrors for dimension and painted a large mirror red, to keep it modern but rococo. We had a lot of fun with that room.

AHIA: Any tips for having fun with color?

BC: Don’t be afraid of it. I like to order lots of paint samples to tape on the walls, because every room has different light. In this case, nature is the foundation of the house, and color is an accessory.