Inspired by the homeowner’s love of pink and blue, designer Laure Antonetti Schutze creates a home brimming with pattern and personality 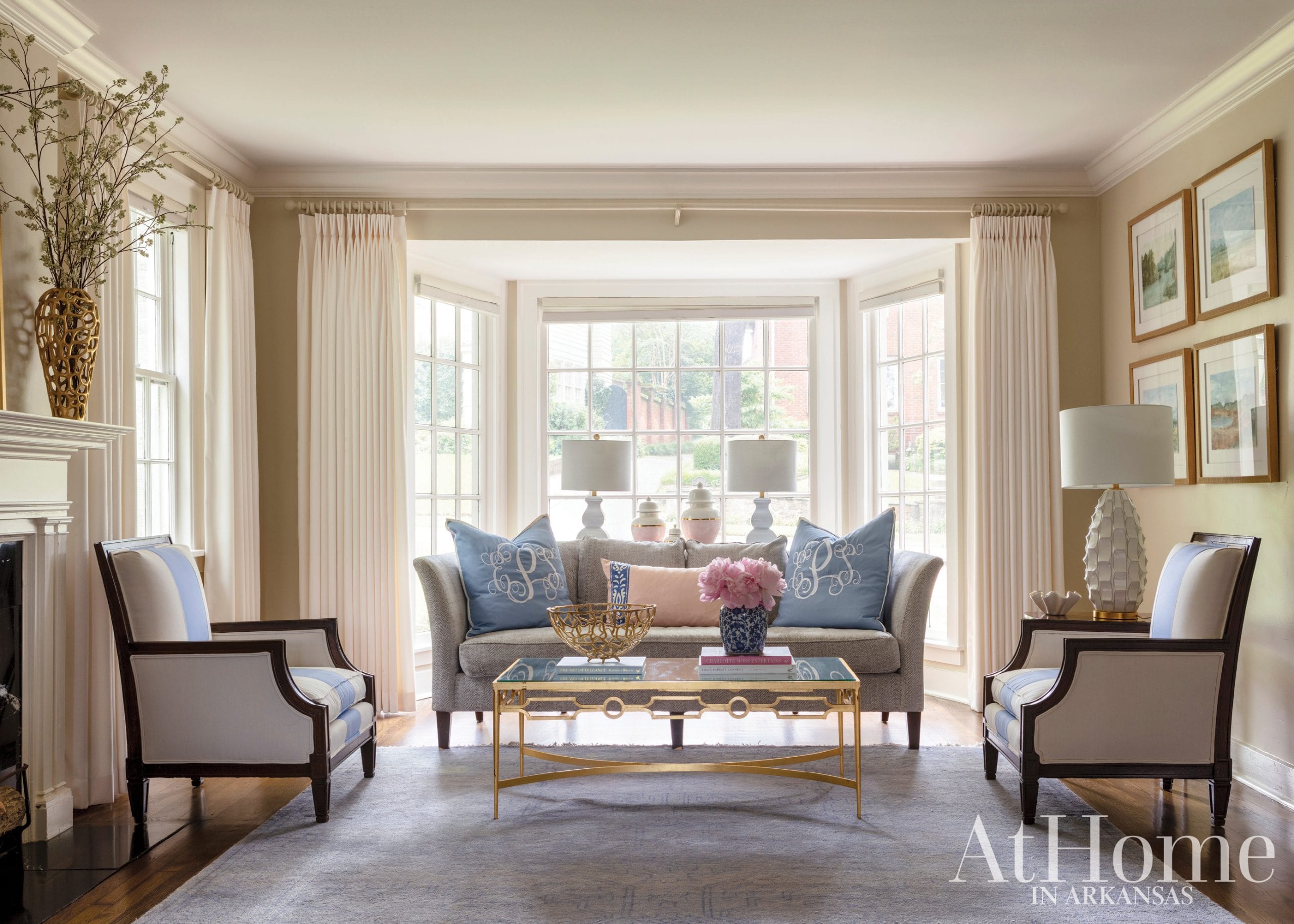 After spending years commuting from west Little Rock to downtown for both work and school, Elizabeth and Scott Poynter knew a move closer to the city center made sense. They began looking at homes in the Heights neighborhood and, upon walking into this house, they knew it was the one. “This house is totally different from our last one,” Elizabeth says of the 1930s abode. “I loved how the floors creaked and that the outside had this charming, inviting cottage look, but inside it had plenty of space for our family.” As the co-owner of Fayetteville’s recently opened women’s boutique, Blythe, Elizabeth loves fashion. Her eye for style carries into other areas of her life, which allowed her to envision the home’s formerly monochromatic rooms coming to life.

Eager to settle in, the Poynters called on designer Laure Antonetti Schutze to bring their vision to fruition. The family had gotten to know Laure through the years, first as their daughter Emory’s figure skating coach. “When I met them, I immediately loved the energy of this whole family,” Laure says. Later, when Laure transitioned to her current role as an interior designer, she helped the Poynters with their former residence. “Elizabeth has impeccable style, is always put together, and not afraid of color or pattern,” Laure adds.

While their previous home had a more contemporary, open floor plan, Elizabeth says her interior style has always leaned traditional. “I especially love blues and pinks,” she says. “When she said pink I thought ooh, this is going to be fun,” Laure notes. Working off of the spaces’ neutral bones, the designer infused the rooms with color, pattern, and personality through fabrics, furnishings, and art, creating a look that perfectly suits the family. 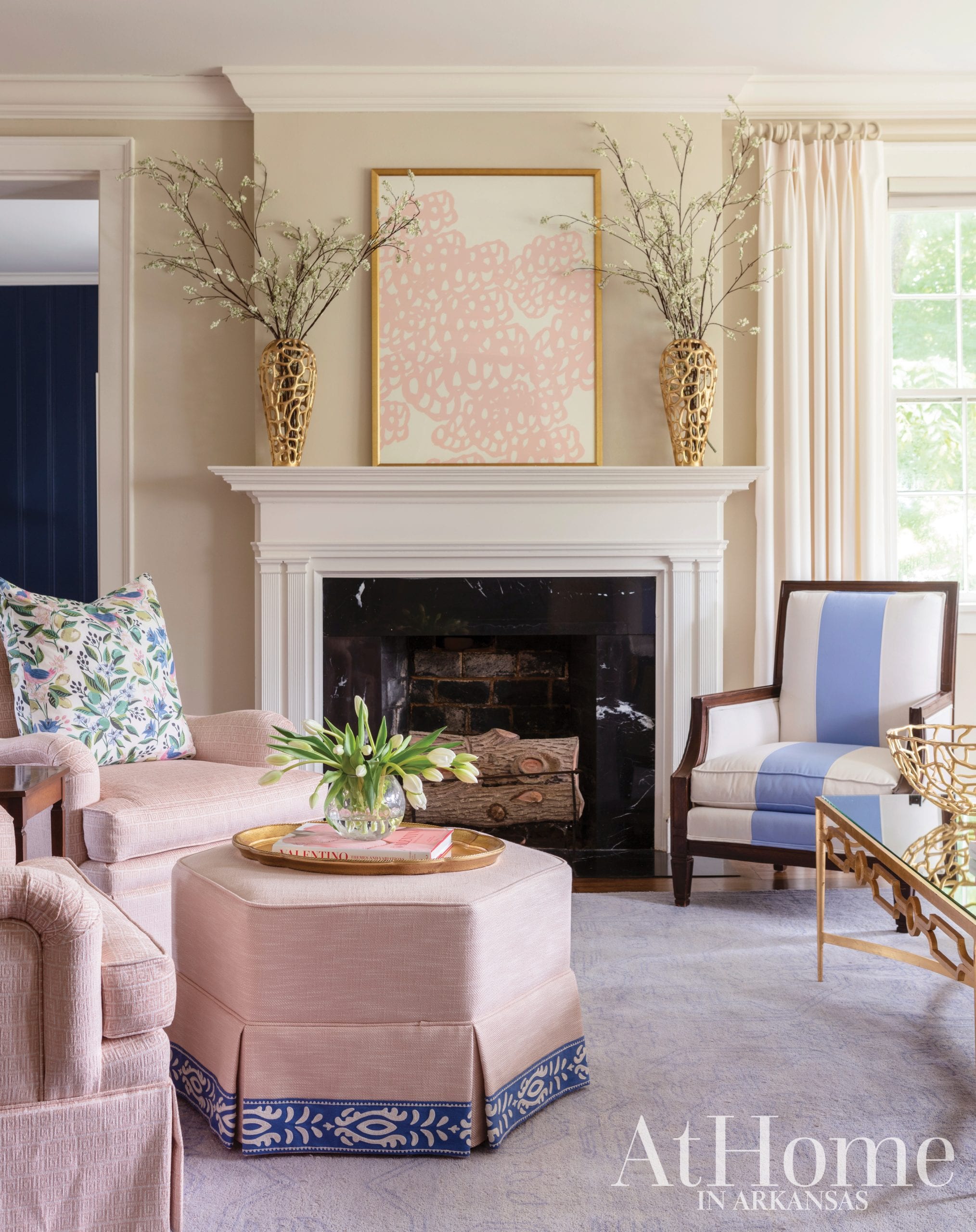 Trending Traditional
In the living room, the existing neutral wall color was kept, allowing the furnishings to stand out. The Poynters reupholstered a number of pieces from their previous home to give them new life here. For example, wooden arm chairs are covered in a blue and white stripe made from two fabrics, while a miniature pink Greek key print can be seen on a pair of club chairs. A Caitlin Wilson rug and pillows tie the range of blues and pinks together while monogrammed pillows and a gold-finish coffee table add poise and polish. 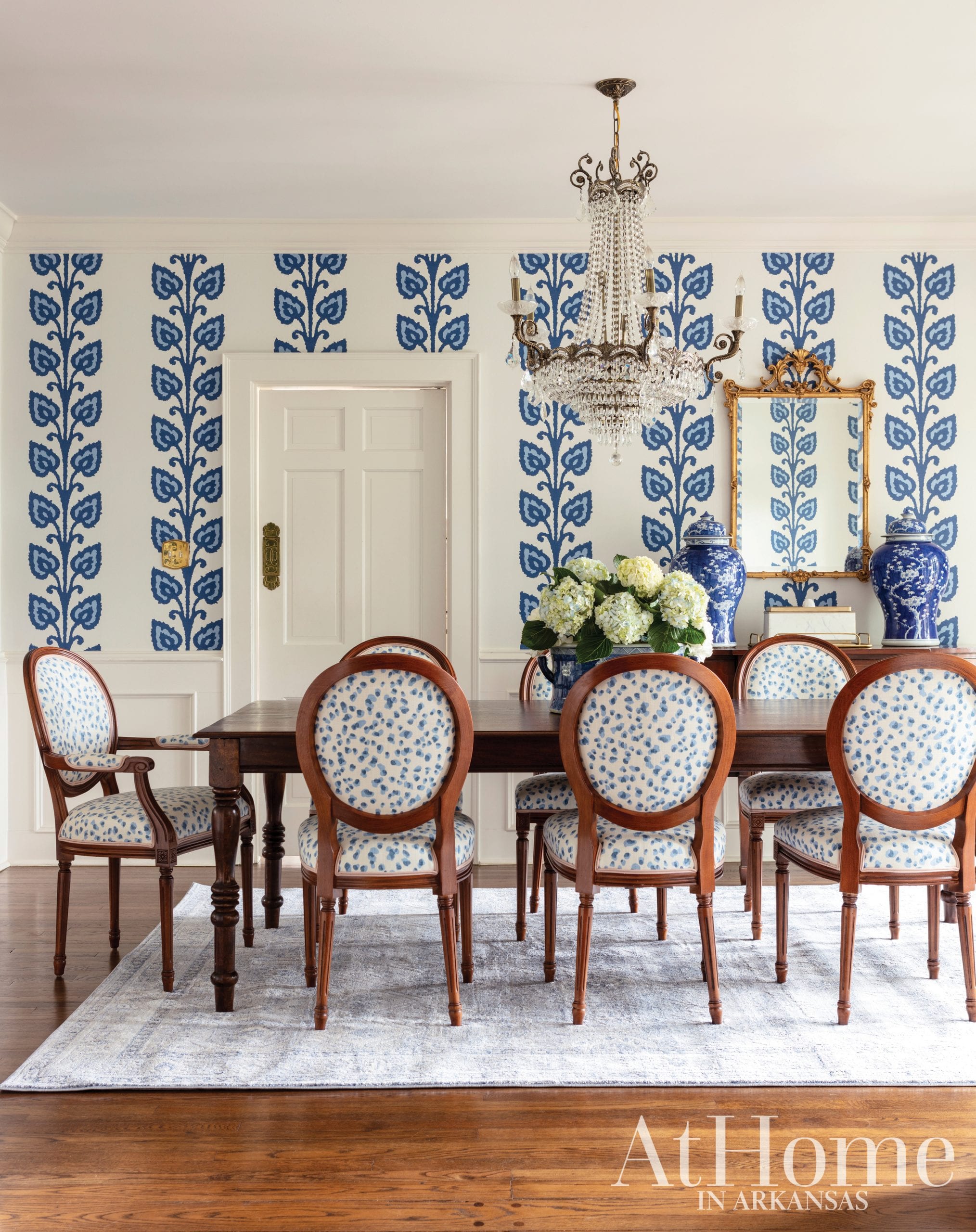 Bold All Over
A Thibaut wallcovering was the starting point for the dining room, and this decision influenced a number of selections in the adjoining living room and nearby den. The existing wainscoting, swinging door, and chandelier stayed in place to retain the room’s traditional charm. “We wanted to hold true to the character of the house, but also inject personality,” Laure says. While blue dominates the palette here, pink welting can be seen on the dining chairs, a hint of what’s to come in other spaces. 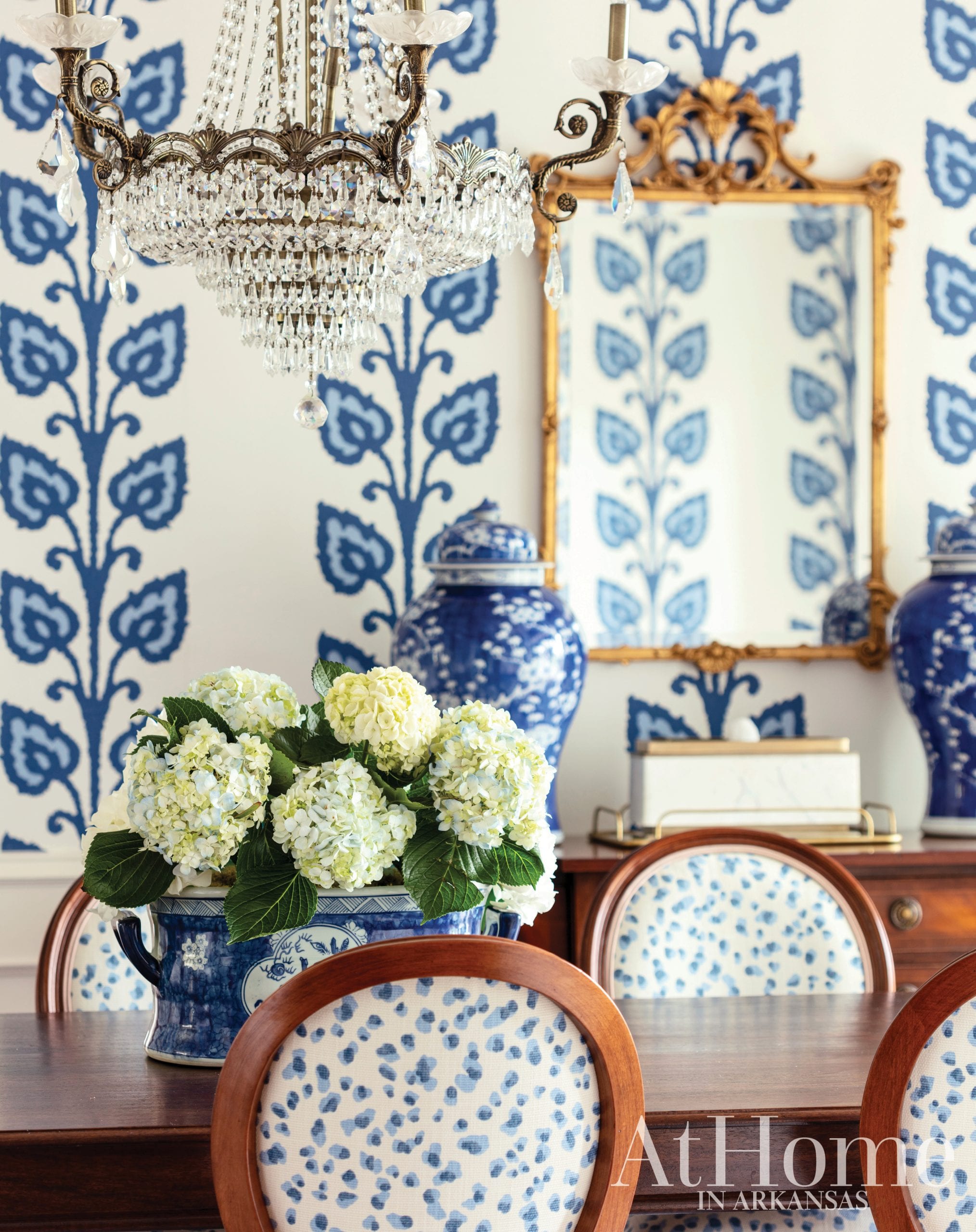 “I am not afraid of color—in fact, I love it. With two dogs and a teen I knew there was no way I could keep an all-white or neutral house clean.” —Elizabeth Poynter, homeowner 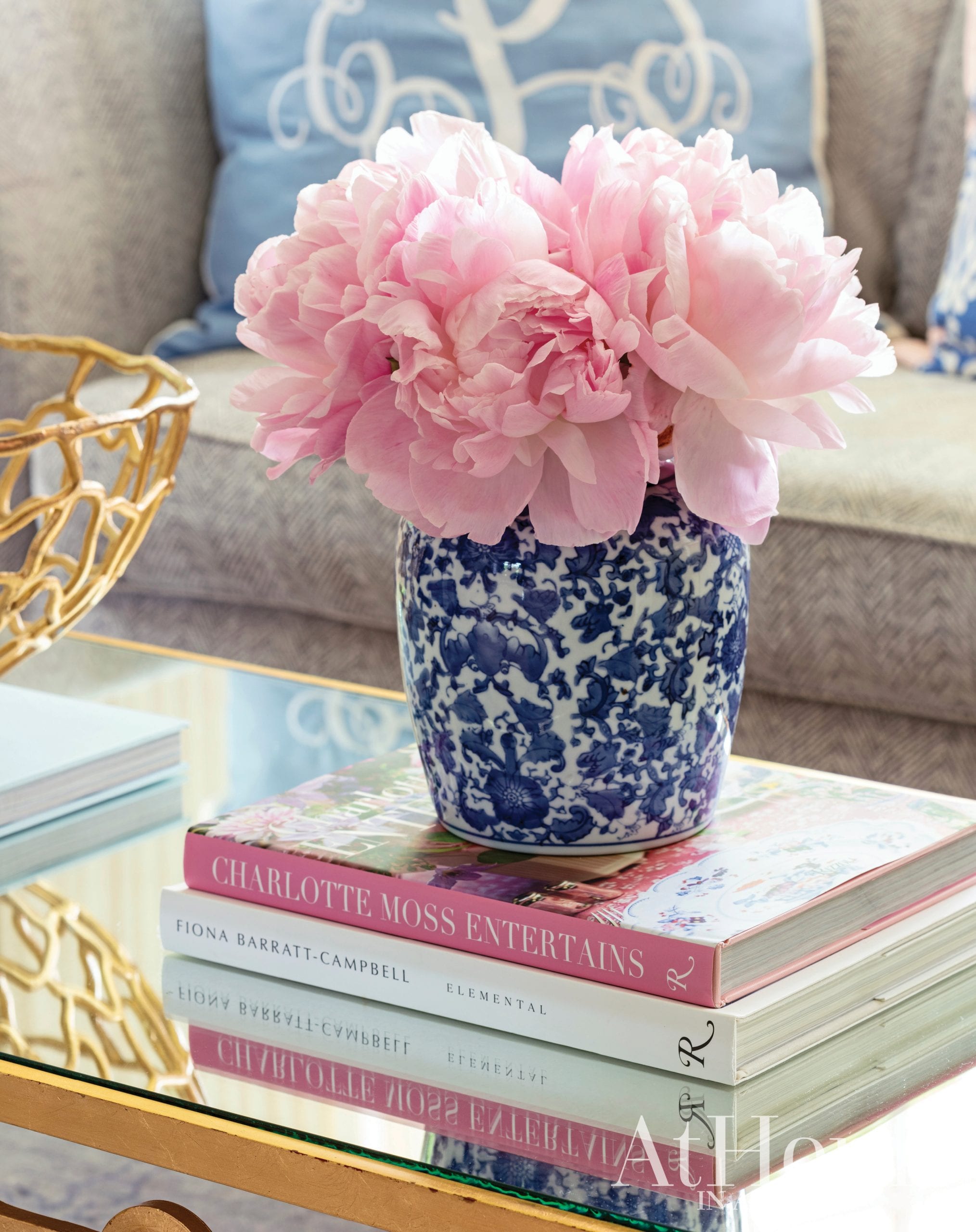 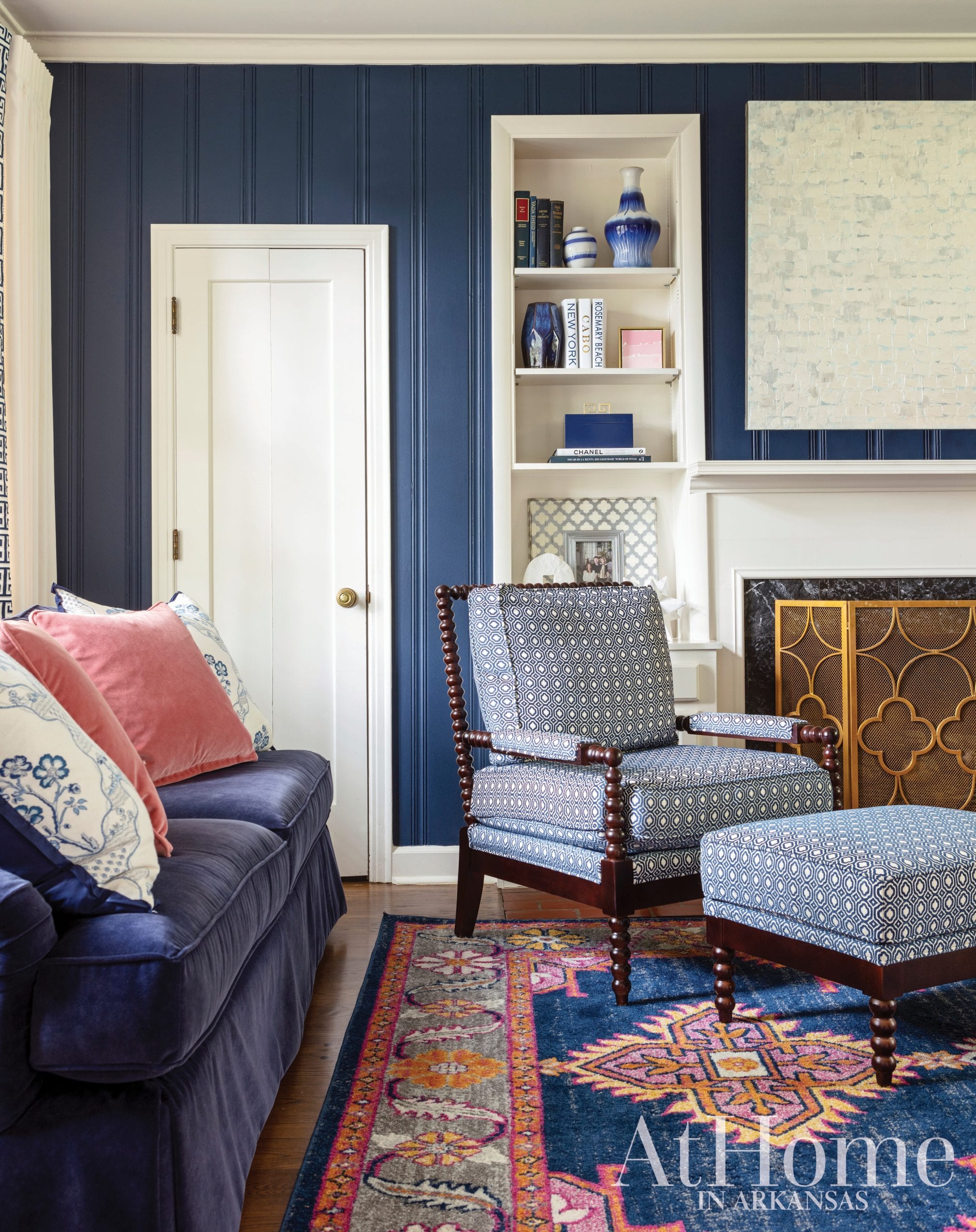 Into the Blue
The cozy den is a favorite family hangout. Prior to the pandemic, the walls were neutral; however, after spending months at home, Elizabeth was ready to make the leap to a bold navy. “Paint is such an easy update, and I love that it gives you instant gratification,” Laure says. The Greek key pattern seen in the living room shows up on the drapery trim in this space. 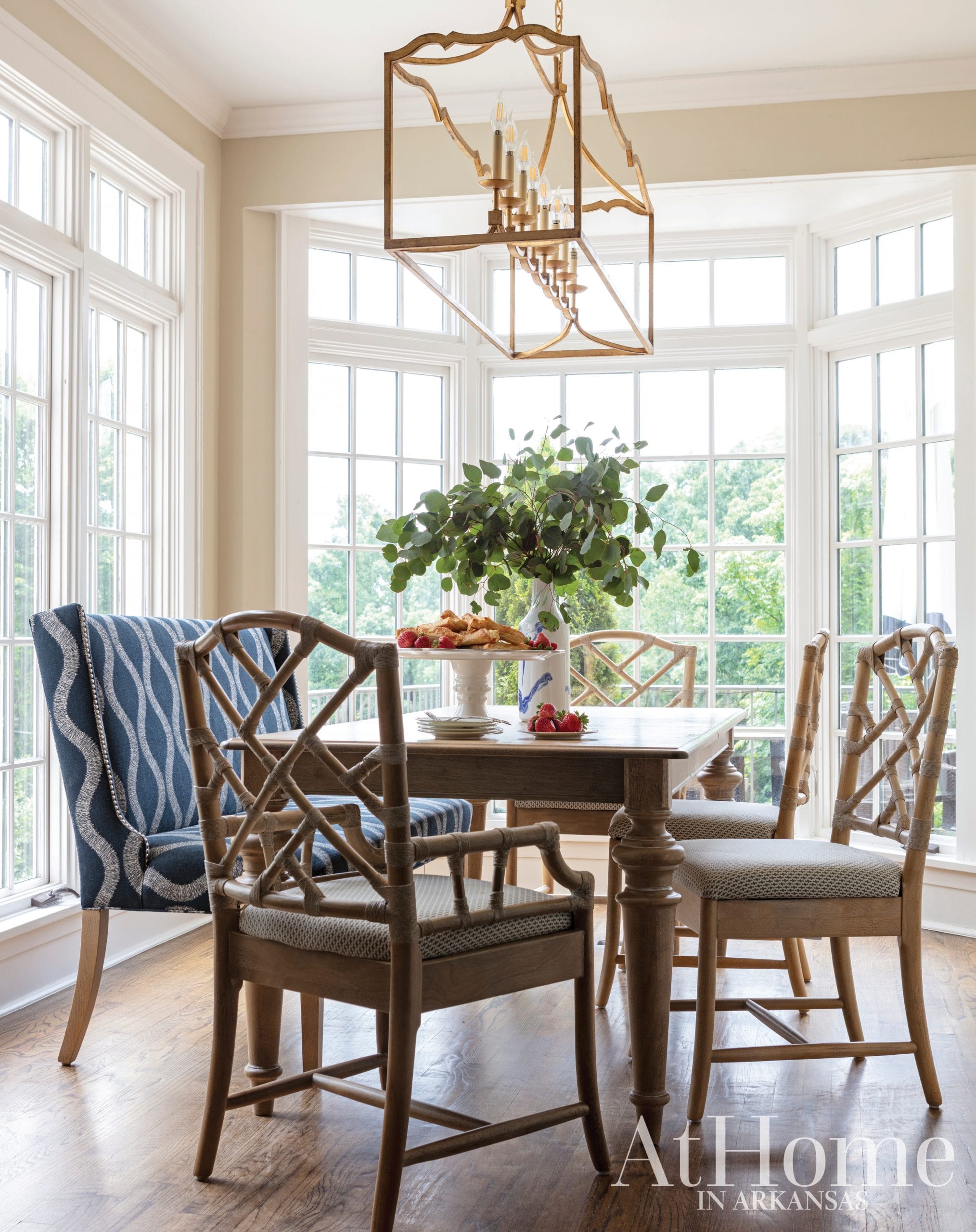 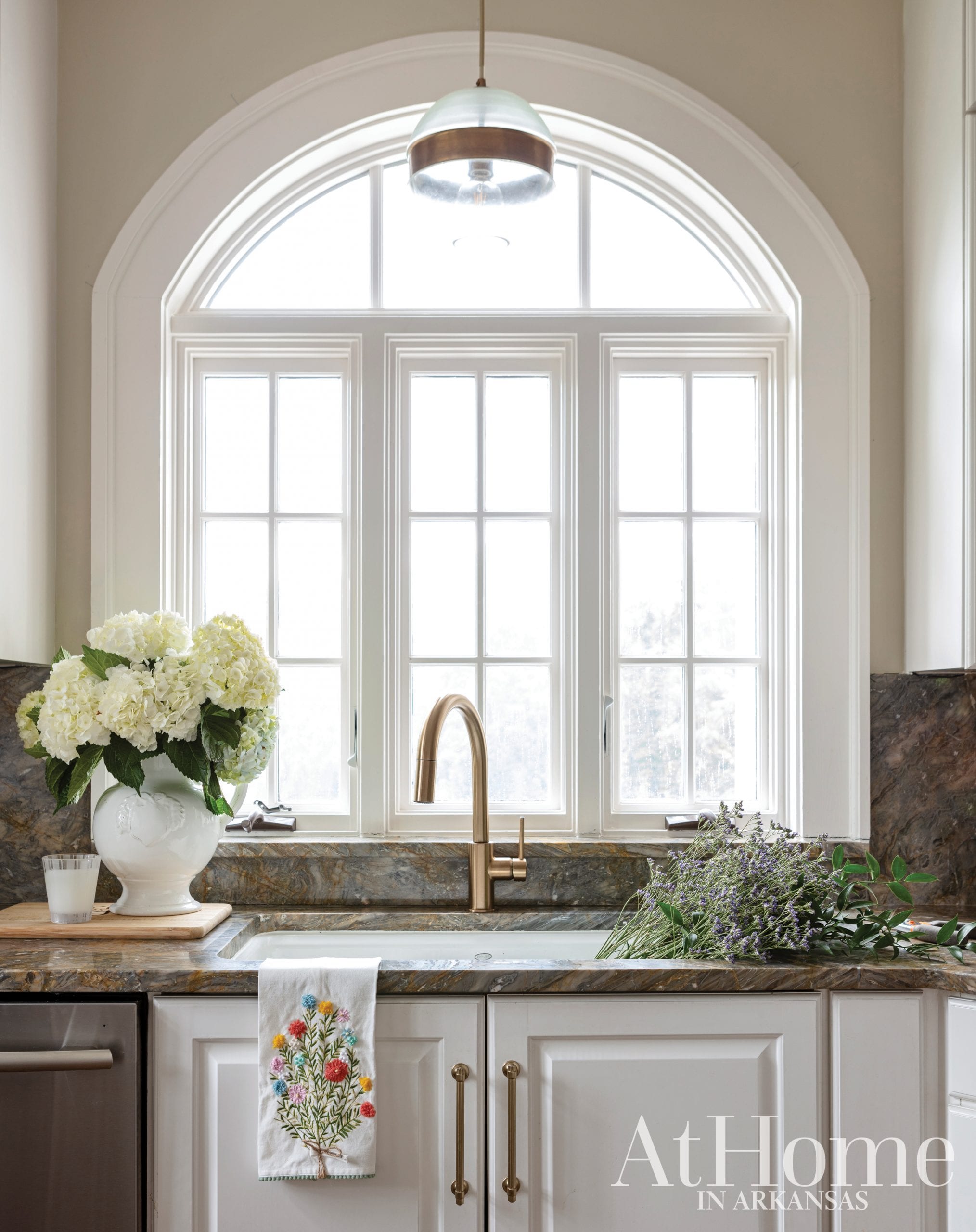 Dining In
For casual meals, the family opts to sit in the breakfast nook where they can take in a view of the backyard and pool. “This room gets amazing natural light, so we wanted to keep it simple and airy,” Laure says. Because the space is narrow, the designer opted for a bench on one side of the table. The adjoining kitchen was in good condition when the family moved in and has been accessorized with small pieces to make it their own. 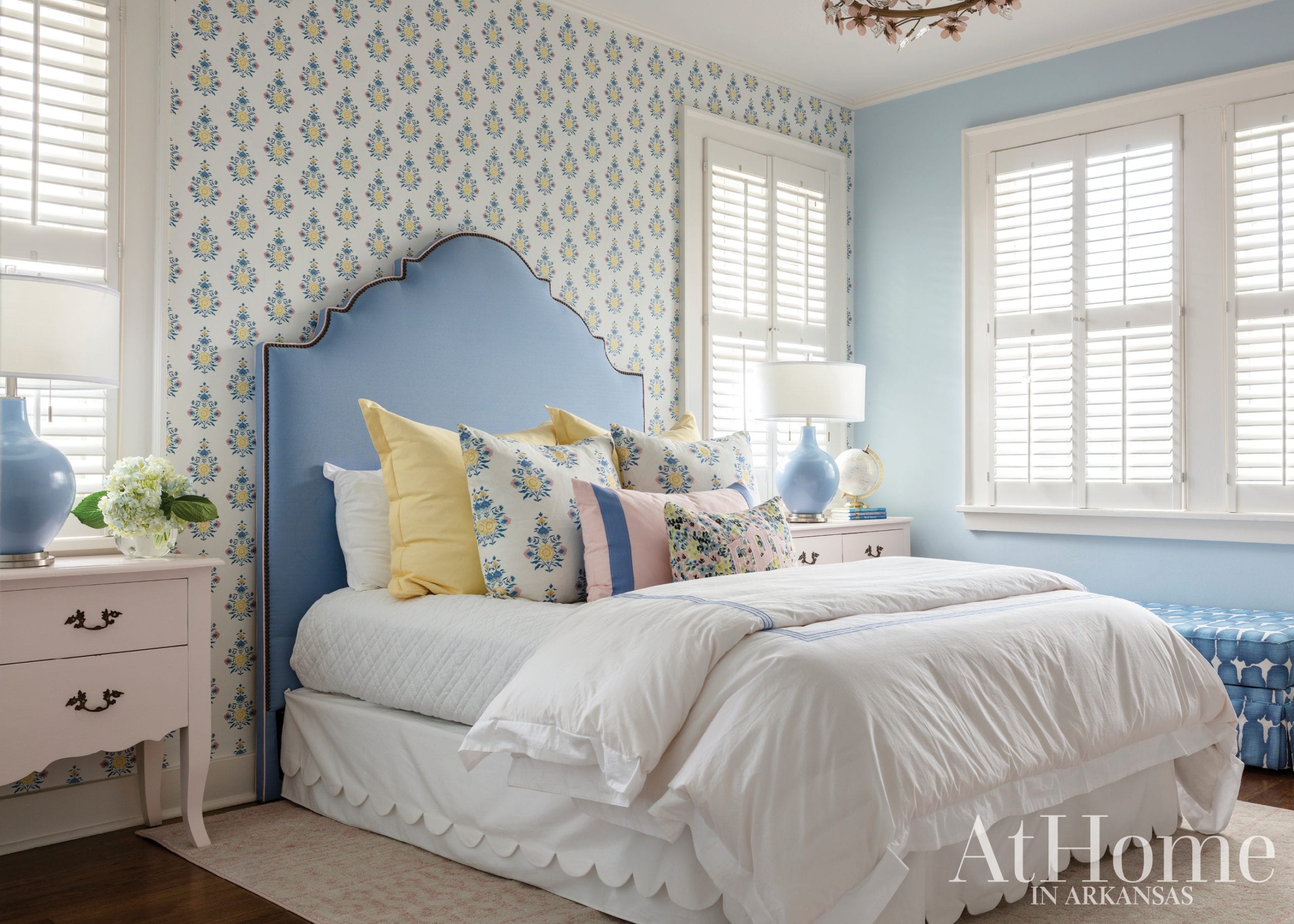 Just for Her
One of the home’s dominant hues manifests in a French blue in daughter Emory’s bedroom. An accent wall covered with a Caitlin Wilson paper speaks to the home’s use of pattern while throw pillows on the bed echo its print. “I am very matchy, matchy,” Elizabeth says. “I like to have a throw pillow that matches the drapes or the wallpaper.” To bring in pink, Laure had a pair of nightstands painted in a soft shade of the color. Large-scale lamps, which were painted the same color as the walls, frame the bed and provide plenty of light for nighttime reading. 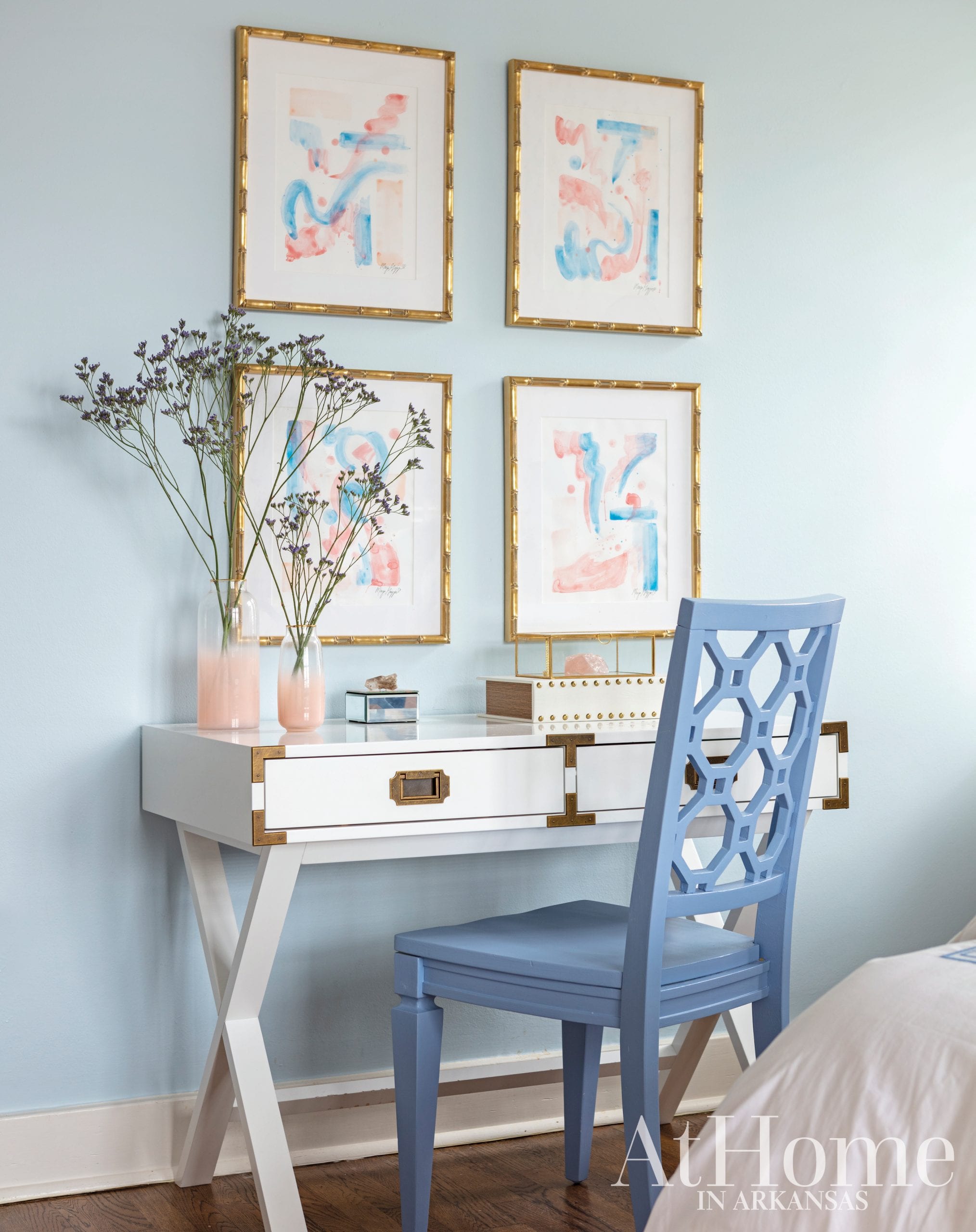 Watercolors by artist Maya Griffin are a nod to contemporary design while their bamboo frames adhere to the home’s overall traditional feel.