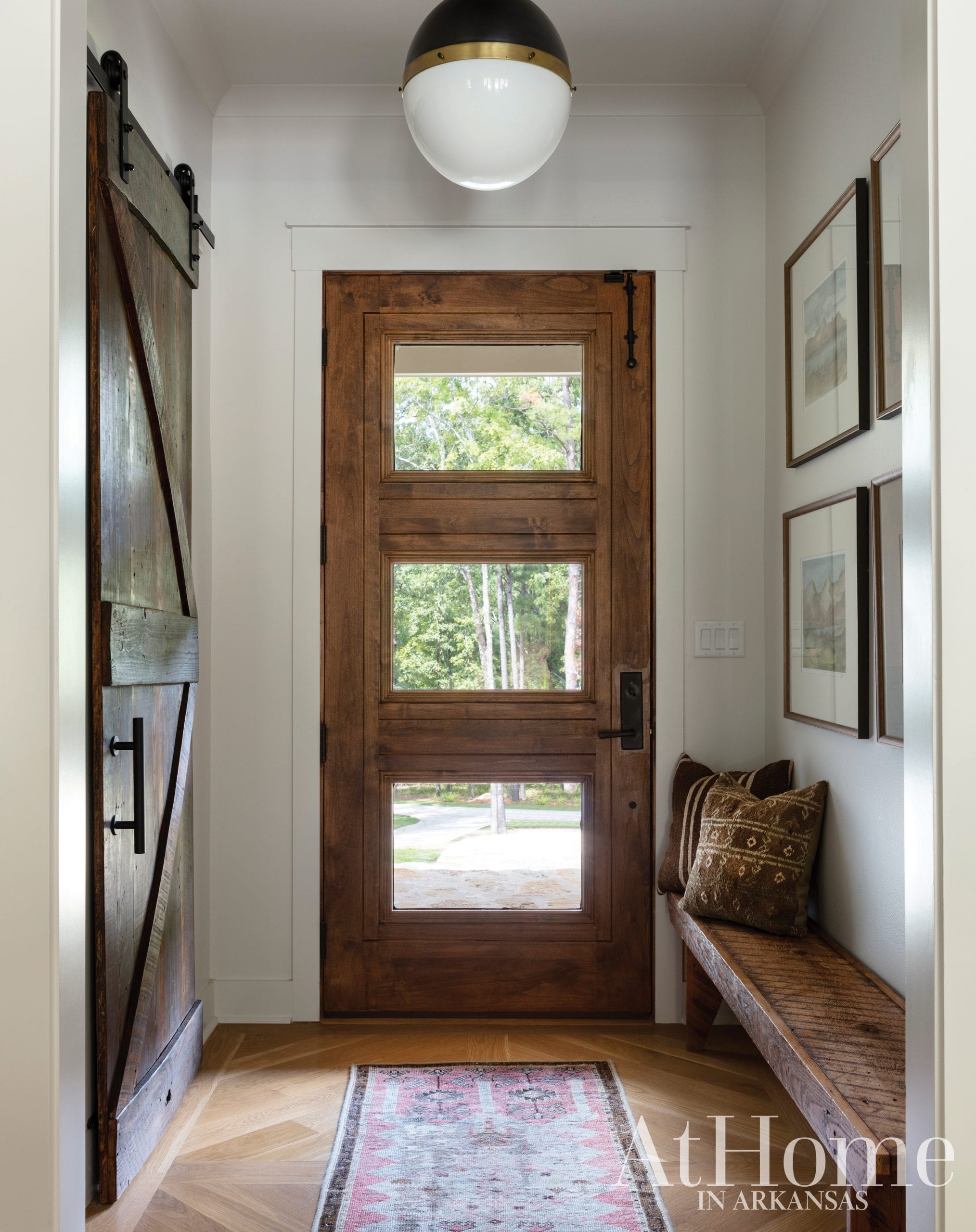 With two kids in college and one in high school, this family of five was ready to downsize but not ready to leave the wooded west Little Rock area they called home. Having lived in their previous house for 18 years, it was the only place their children had known; plus, the secluded setting made it an ideal location to escape the busyness of the city without being too far from its amenities. When a neighbor was willing to sell a vacant lot they owned, the couple jumped at the opportunity and decided to build to suit their next phase of life.

Immediately they called on builder Harold Spradlin, who had been the project manager on their last house, and friend Amy Terry of AC Designs to help put their plans into action. Having grown up with one of the homeowners and even been a bridesmaid in the couple’s wedding, Amy was more than familiar with their needs and their style. “She has such a good eye for things that she makes it easy,” the designer says of her friend. “Amy was great at making me stay on track,” the owner notes. “I like so many different things that I try to throw it all in, and especially toward the end of the build I was so sick of making decisions that I leaned on her to think through
those details.”

Their biggest style influence came from the outdoors. “In my husband’s next life he wants to be a rancher, and I grew up on 200 acres so we have a real love of nature and just being outside,” the homeowner says. She also notes she is very practical. “I don’t like buying things just because; If it’s hanging on a wall and doesn’t mean anything, I don’t want it, so walls will often go blank until I find something I love.” With three kids and three dogs, this practicality carries over into all aspects of the home as an abundance of relaxing spaces and meaningful objects are apparent throughout the home. “I like it to feel warm and very casual. I like to walk in someone else’s house that is elegant and beautiful, but I prefer to come home to something that feels lived in,” the homeowner says. “I think this house has a very collected vibe,” Amy says. “It feels like pieces have been searched for and that the things here are ones they really love.” 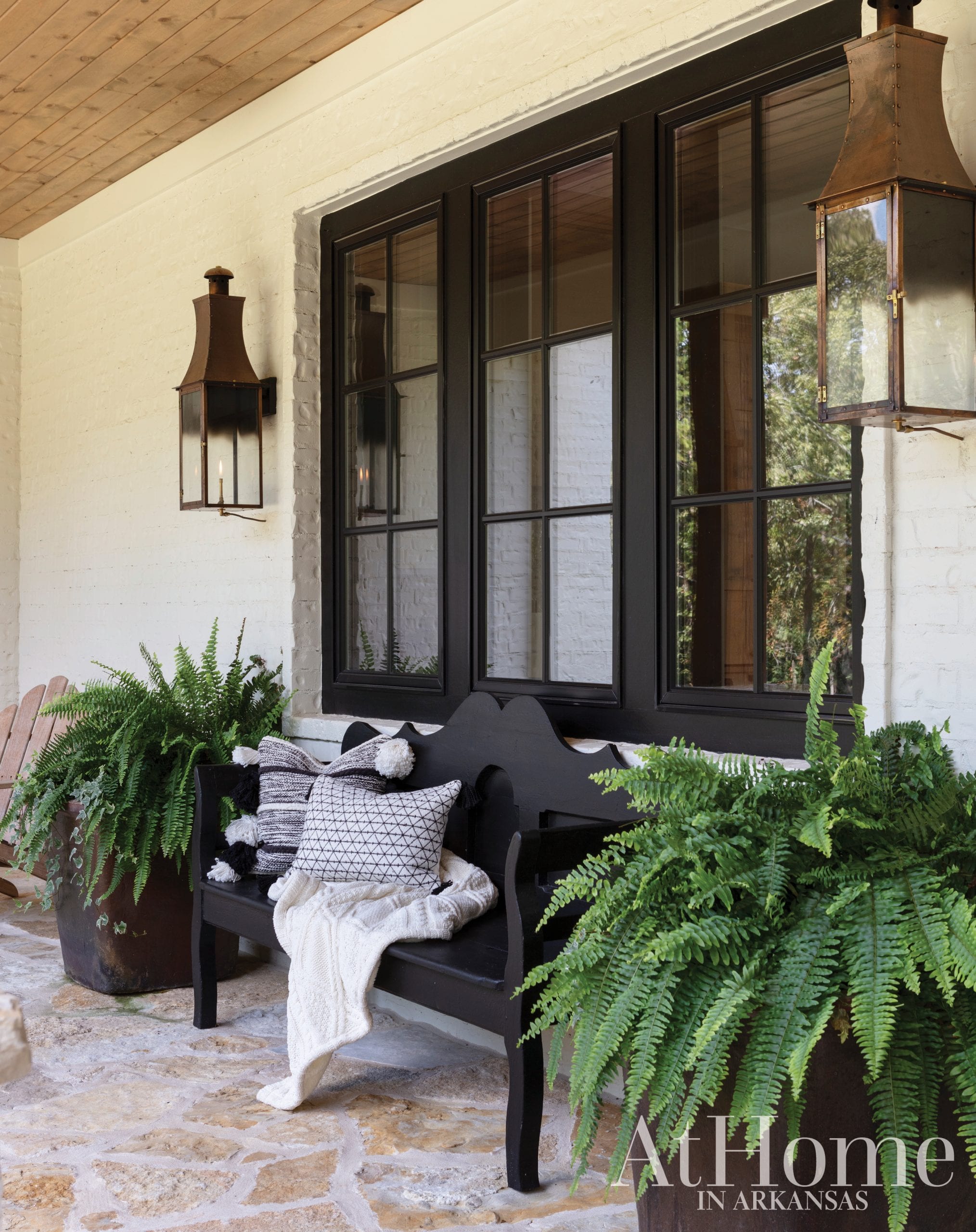 Simply Inviting
Along the home’s facade, a large window looks out from the kitchen to the front lawn. The owners gave a bench they owned new life with a coat of black paint to match the window casing and muntins and finished the design with gas lanterns. “I love the flicker of a gas lantern at night, so I had to have those,” the owner says. 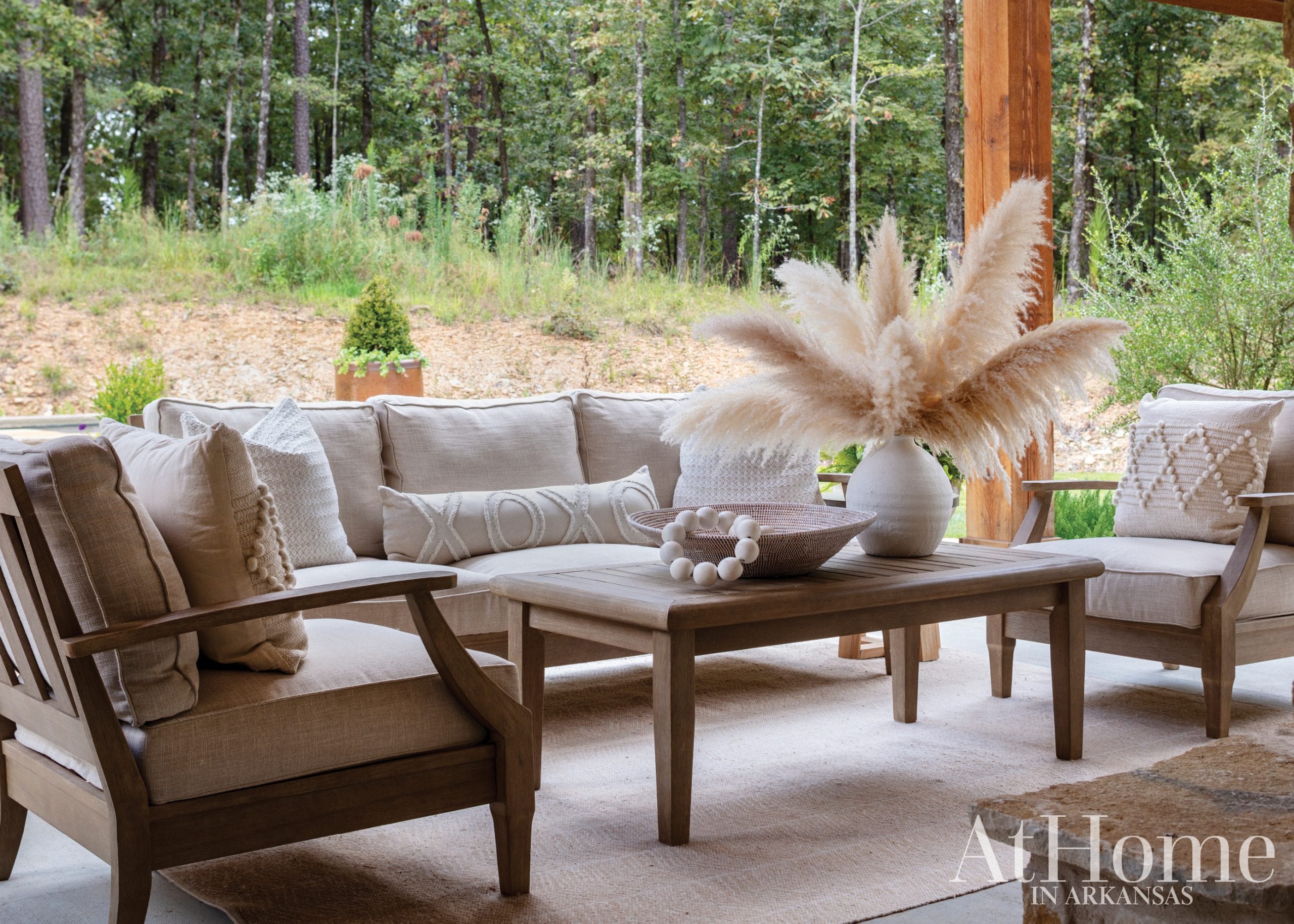 Mix Not Match
In the kitchen a range of wood tones bring warmth to the white cabinetry and quartzite countertops. Similarly, Amy chose to mix finishes, opting for chrome on the more utilitarian features such as the faucet and pot filler and coordinating golds on the lighting and hardware. “I think having different finishes looks more collected; however, I do like to match lighting and cabinetry hardware together because those are more like the room’s jewelry or the finishing touches.” 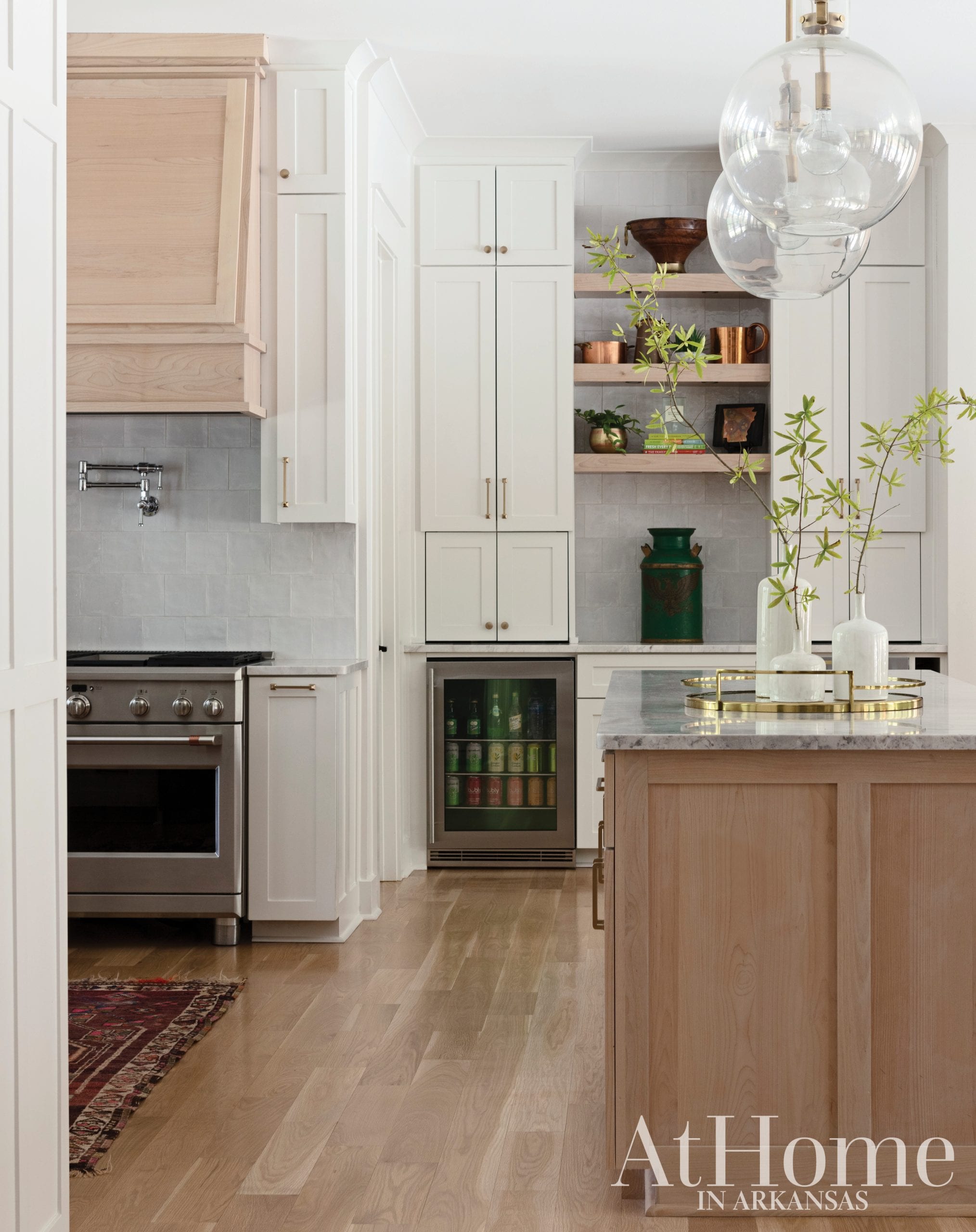 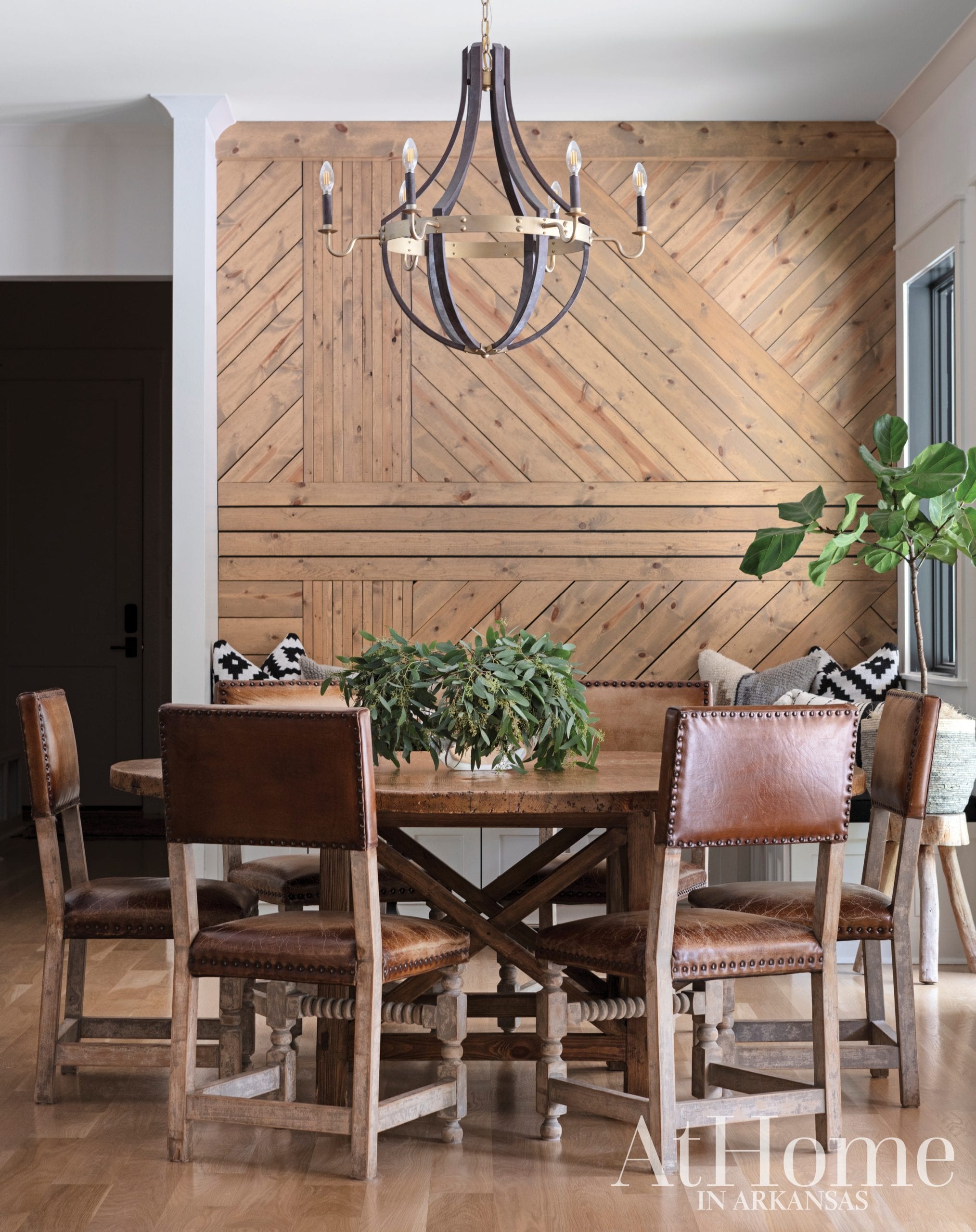 Focal Point
“I had been thinking about doing a wood accent wall and searching magazines and Pinterest for inspiration,” the homeowner says. After finding an inspiration picture, she showed Amy and Harold, who tweaked the design to this interpretation. “We didn’t want plain wood, but we also didn’t want it to be too crazy,” Amy says. “It turned out to be almost like a piece of art.” 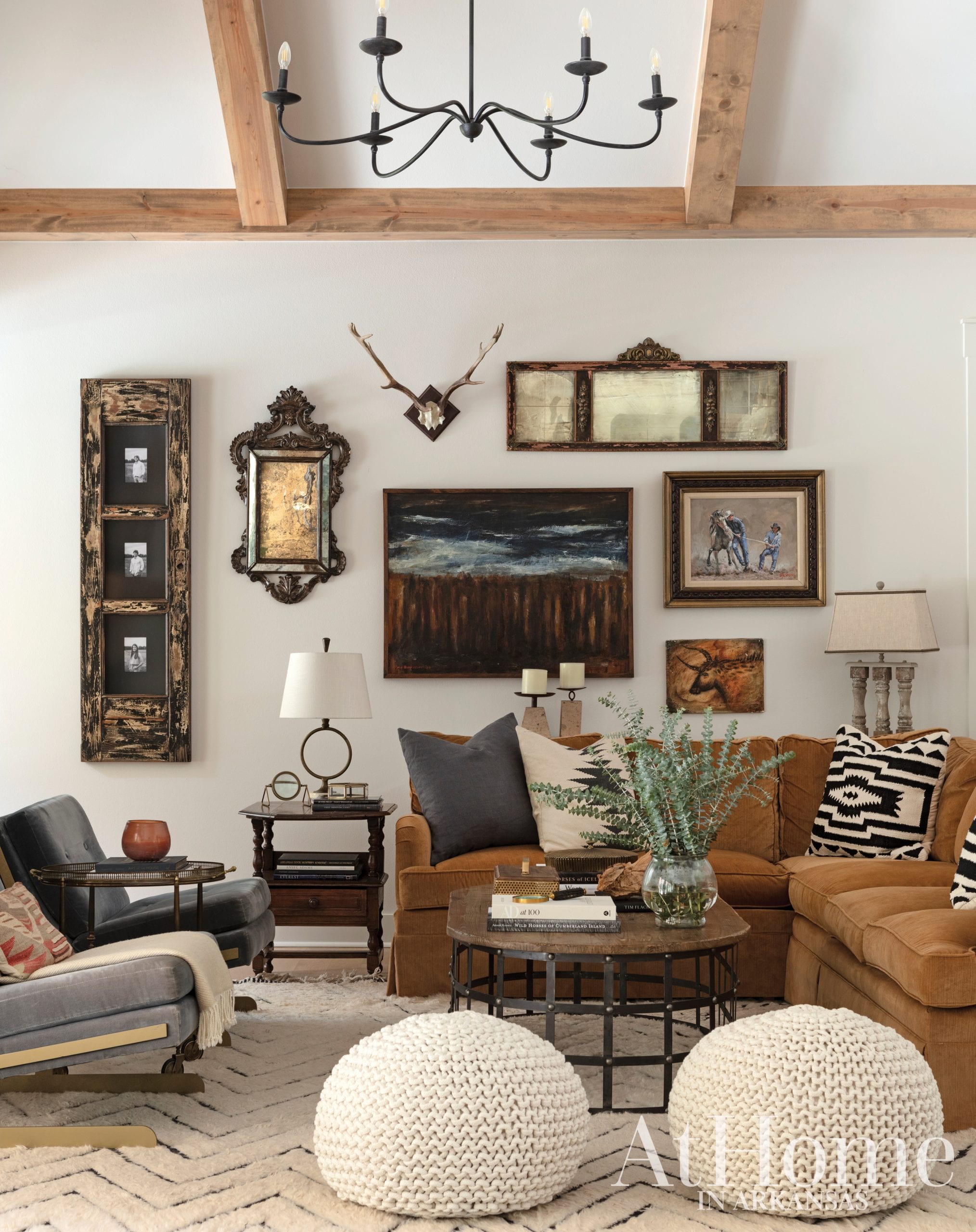 Collected Style
Amy shopped the couple’s existing furniture to create an entirely new look in the living room. Starting with the velvet sofa and rug, she brought in low-back blue and gold chairs that were formerly in their home office. These allow for a clear view of the adjoining kitchen and dining area in the open-concept plan. The focal point is a gallery wall the designer created from family pictures, artwork, and mounts. “Amy started working on the collage, and we got excited; it really makes this room,” the homeowner says. 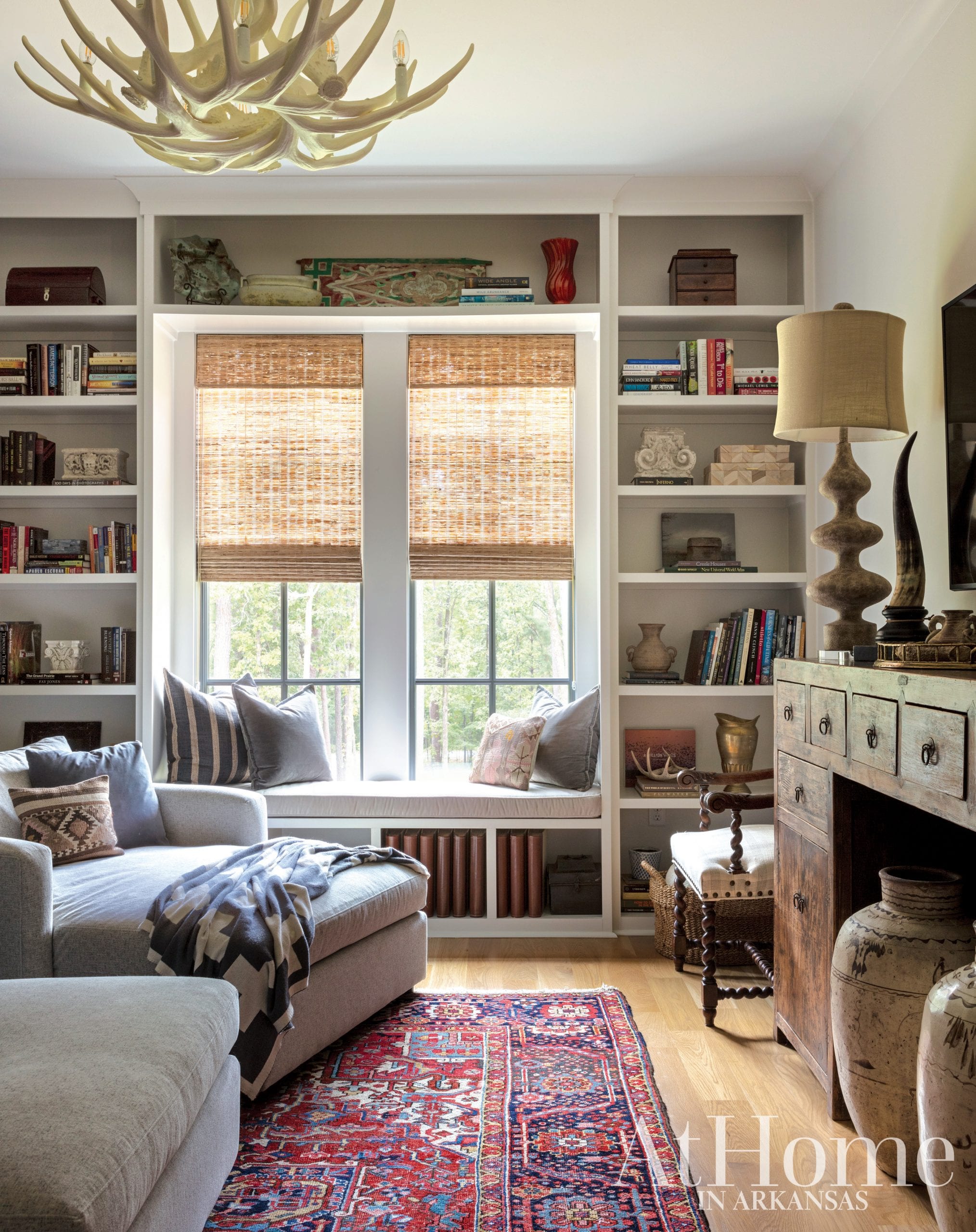 A trio of oversized chaise lounges make the media room a favorite hangout for the family. Accents such as the antler shed-inspired chandelier and rattan window coverings adhere to the home’s outdoor influence. 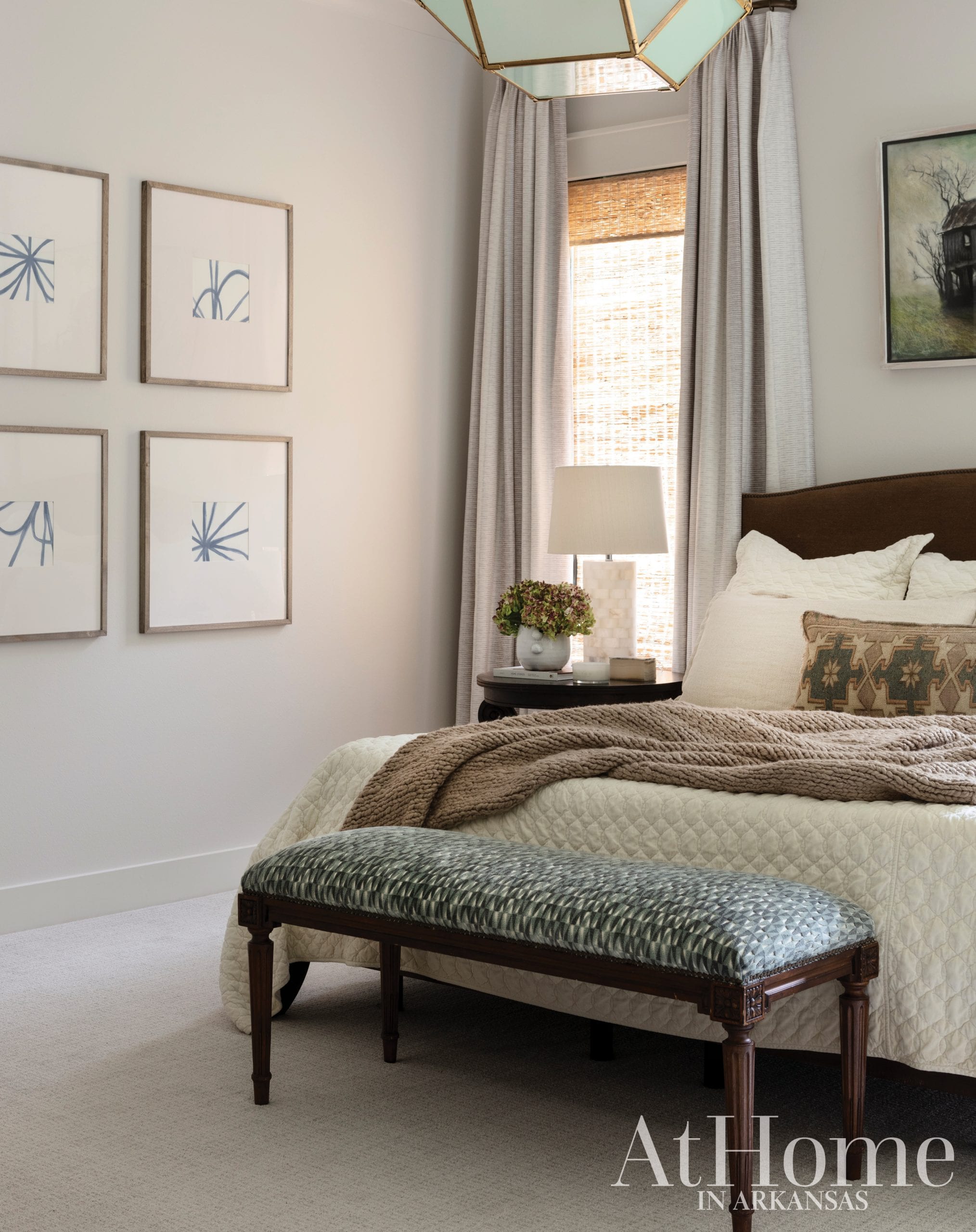 Bring on the Blues
In the owners’ en suite bed and bath, simplicity reigns. Amy brought in soft blues to add to the room’s restful feel. “Blue is so timeless that it can really act as a neutral,” the designer notes. Over the bed hangs a traditional work by artist Patricia Palmer that is juxtaposed with a series of abstract pieces by Emily Cobb. 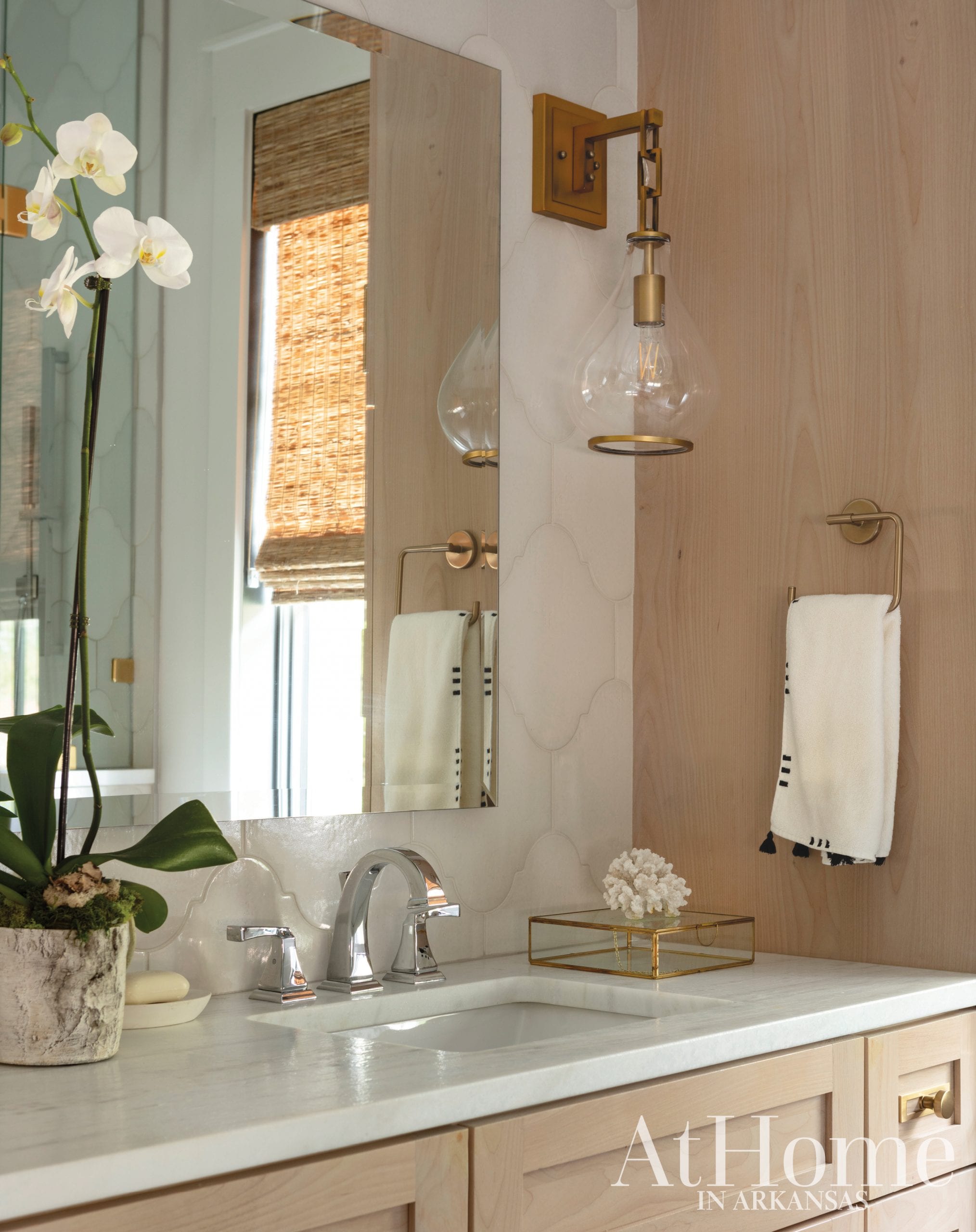 “This house has a timeless feel that won’t be outdated any time soon. It’s not fussy but real and relaxed.” —Amy Terry, designer 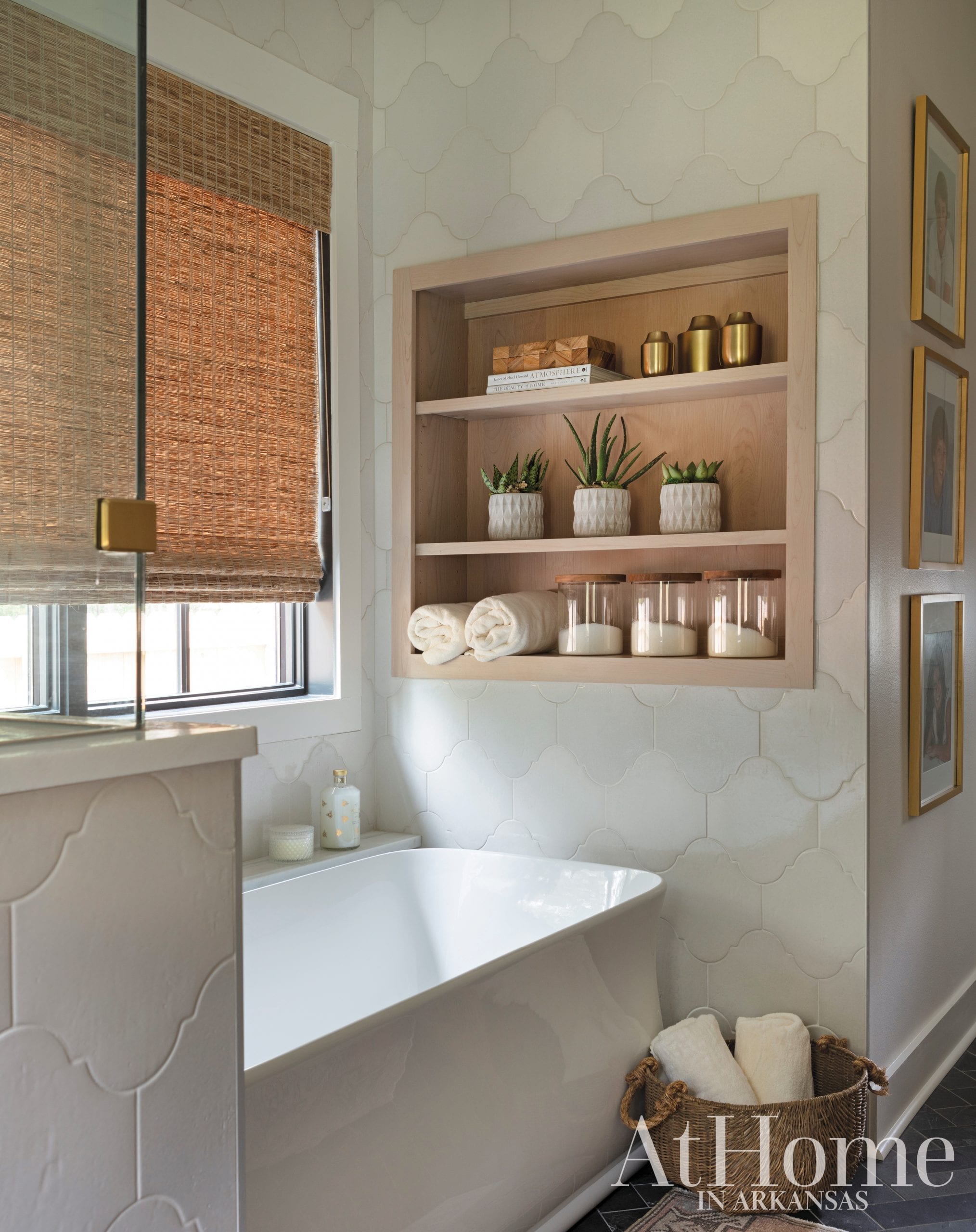 Neutral Gear
In the bath, practical features—such as the shelving seen at one end of the soaker tub and the neutral palette—keep the look clean yet in line with the rest of the home. “We wanted to add some character with the tile but didn’t want to hate it in five years, so we went with a classic, large-scale arabesque,” Amy notes.