Inspired by their home’s architecture, a Little Rock couple enlists the help of P. Allen Smith to create a European-style garden 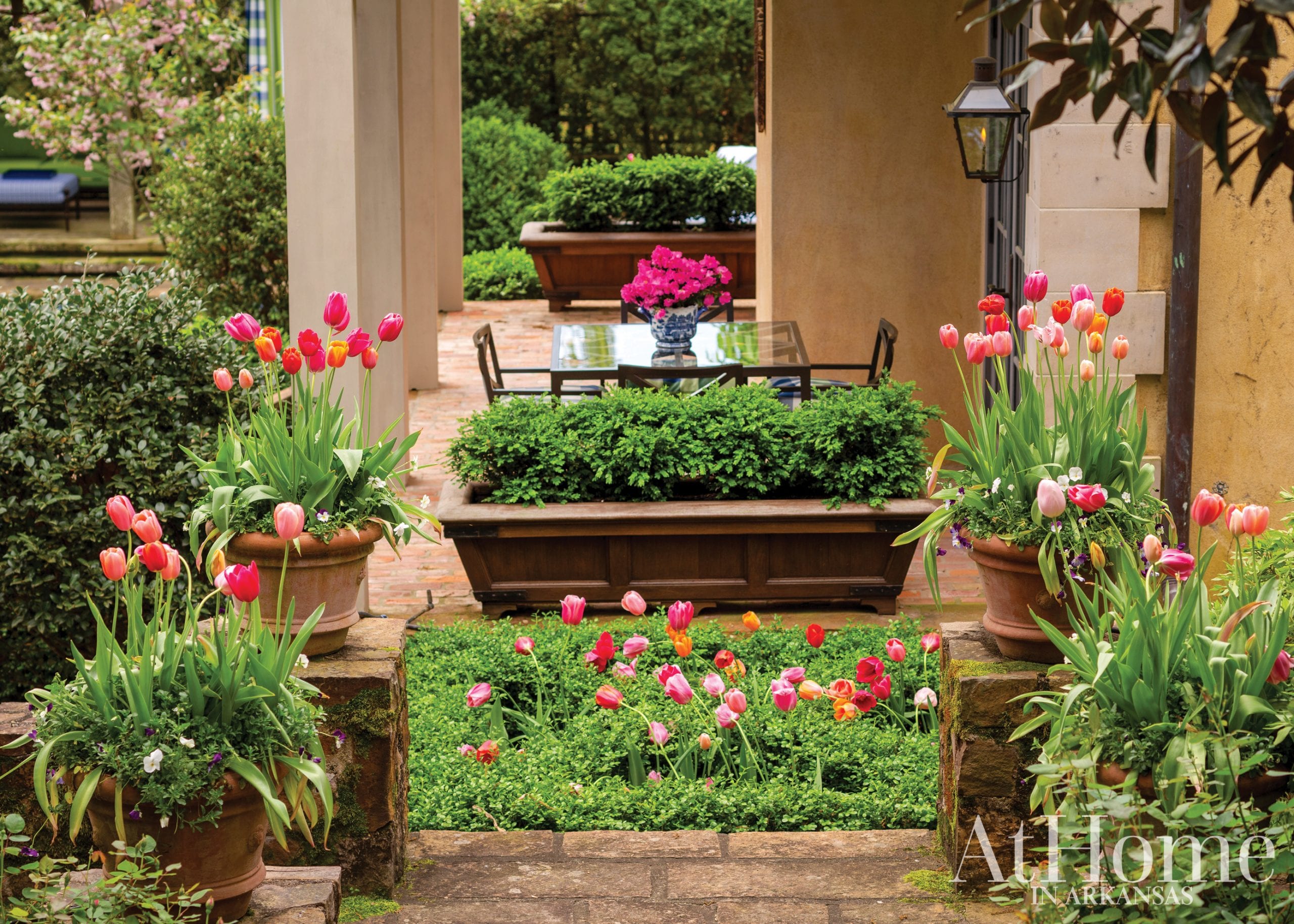 Having built a home in west Little Rock, Kim and Mark Brockinton thought they had put down roots that wouldn’t easily be moved. However, a call from their builder led them to look casually at a property in the capital city’s Heights neighborhood, which led Mark to purchase it as a surprise for Kim. “I think Mark must have sensed I was up for taking on another home,” says the designer and owner of Kim Brockinton Interiors. Working with New Orleans-based architect Davis Jahncke, who had also overseen their previous home, plans began to take shape for a French country residence. “I instinctively knew I wanted to keep it French, but much less formal than the home we were living in—something that evoked the passion I felt when traveling in rural France,” Kim says.

Knowing French gardens are held in almost as high a regard as the homes, Kim wanted to make the outdoor spaces exquisite. Working with a blank slate, she sought the help of landscape designer P. Allen Smith. “I’ll never forget my first day with Allen. He’s a wonderful storyteller, and by the end he had painted a picture of what the garden could be: structured yet informal, inviting yet private, and, most of all, creating that intimate and romantic notion one feels when traveling through the small villages in Provence,” she says. “I told her the garden always bows to the house,” Allen says of the European-inspired design.

The plan called for a series of old world-style garden rooms connected by steps and pathways that seem to meander one to another. “You never see the garden fully from any one point of view, so your curiosity is piqued and you’re drawn into it,” Allen says. Plantings were selected with the intention of providing year-round visual interest and were incorporated around the property’s existing trees. “This garden is a stage with different actors coming on and off,” Allen says. For example, in the spring, French tulips play a vibrant role, dotting the landscape with tones of coral, peach, and pink that stand out against the home’s exterior and hardscaping. “A garden is dynamic, always moving, always growing, and always needing care. Kim and Mark have followed the plan for this space so closely,” Allen says. “Whether it’s seasonal color, pruning, or maintenance, they’ve helped it stay true to the original design.” 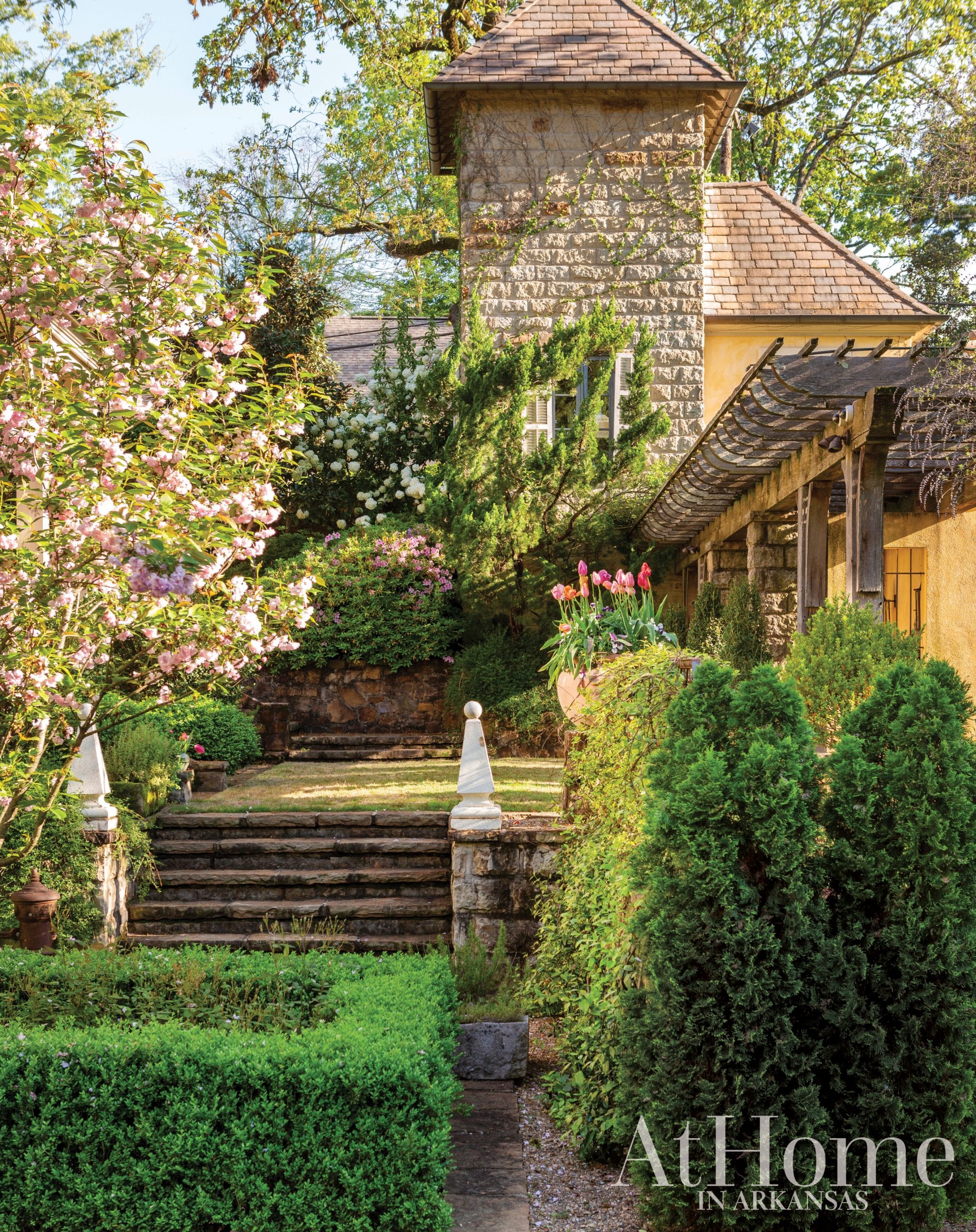 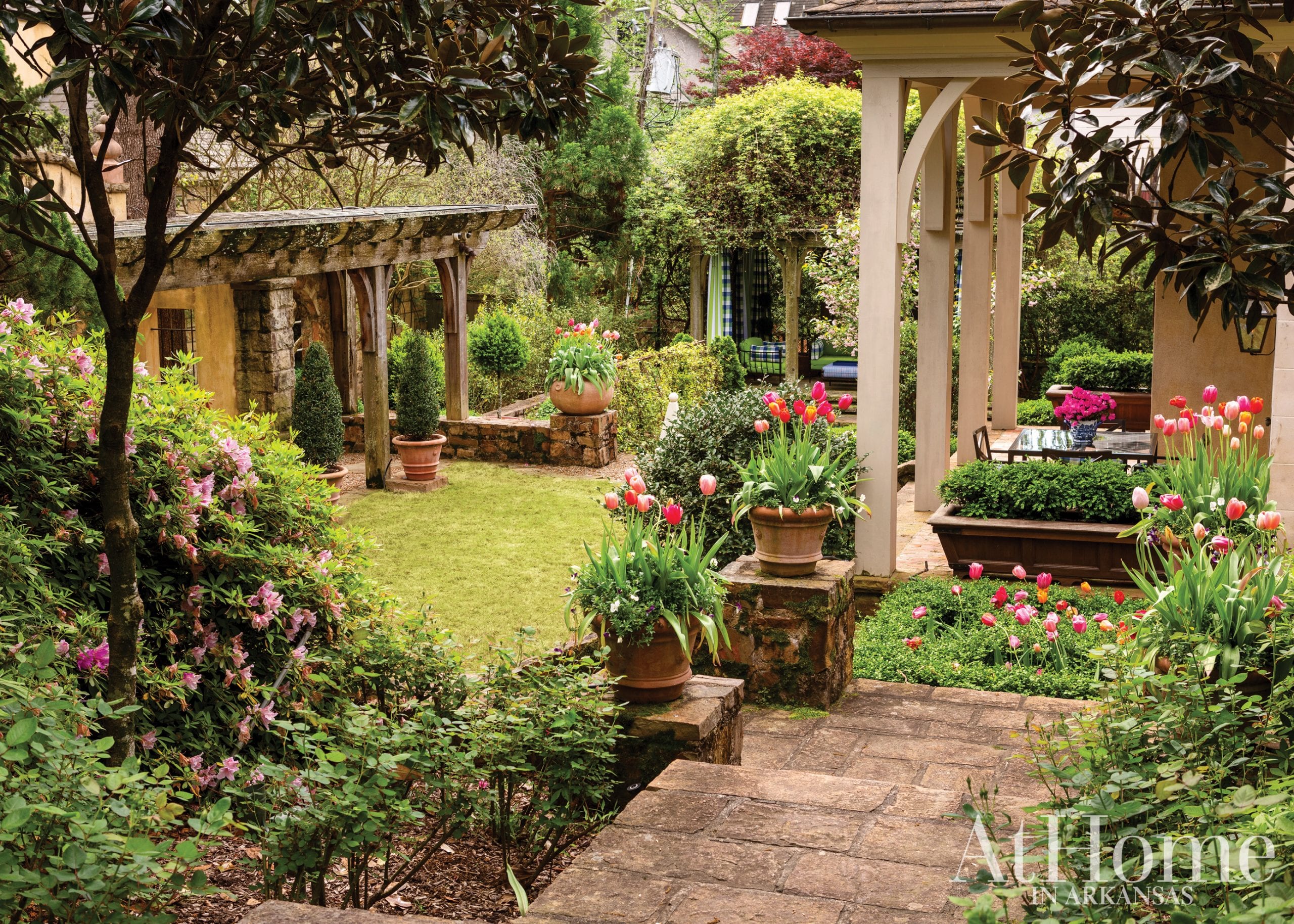 Ascending Order
An oddly shaped lot with an incline that fell from north to south presented a design challenge. “We had to be clever about traversing the steep grade to make it feel like gentle landings,” Allen says, noting how steps break up the climb. A mix of deciduous and evergreen trees complemented by winter jasmine and boxwoods provide visual interest year-round. 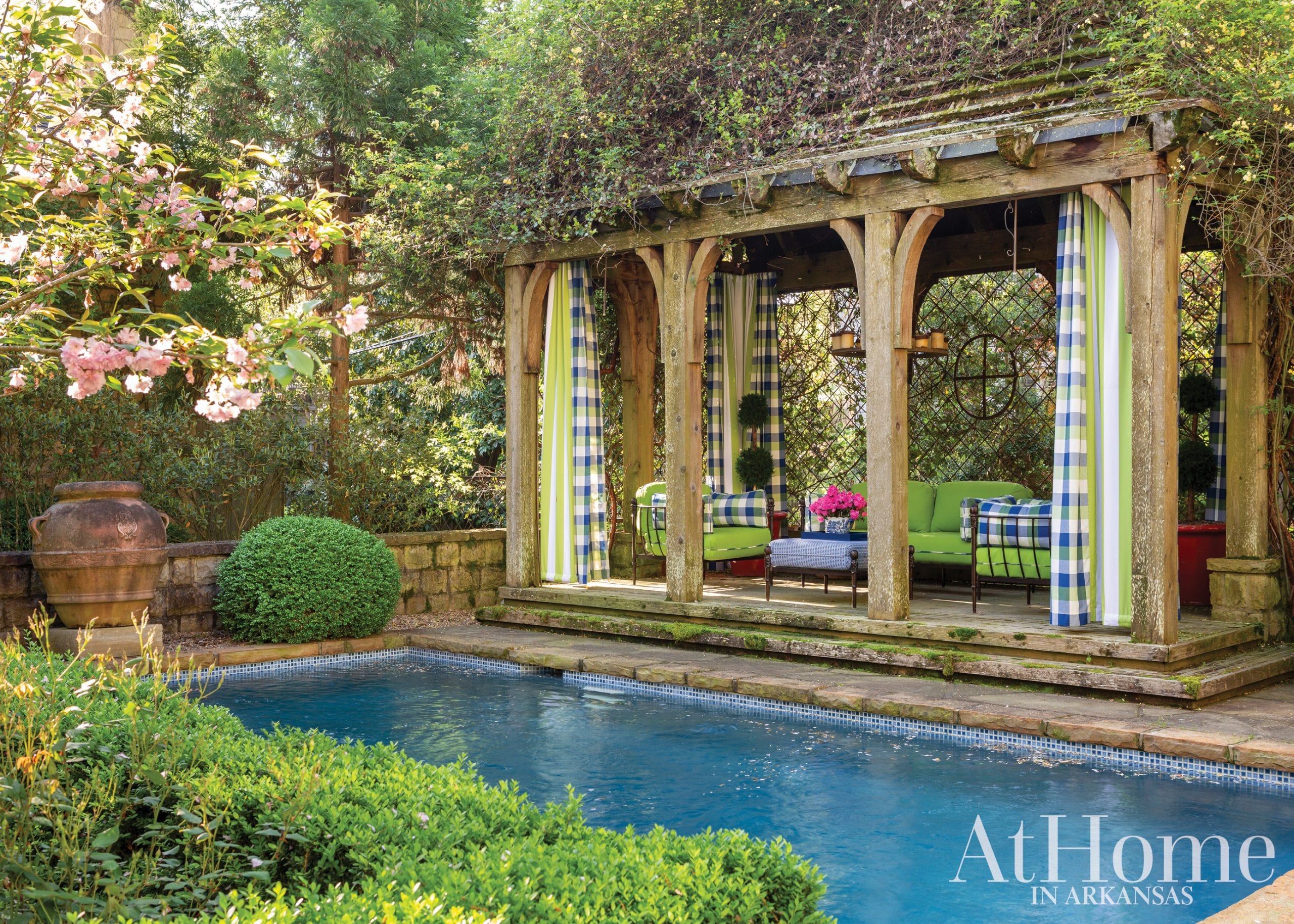 Cottage Cabana
Kim refers to the pavilion near the garden pool as a “summer cottage.” The partially covered structure provides respite from the sun and has comfortable chairs for reading and relaxing. ‘Lady Banks’ climbing roses, a thornless full-sun variety, were chosen as the crown for the cabana because their cornmeal-hued blooms match the exterior color of the home. A bed featuring a cherry tree, boxwoods, and seasonal herbs bookends the pool. 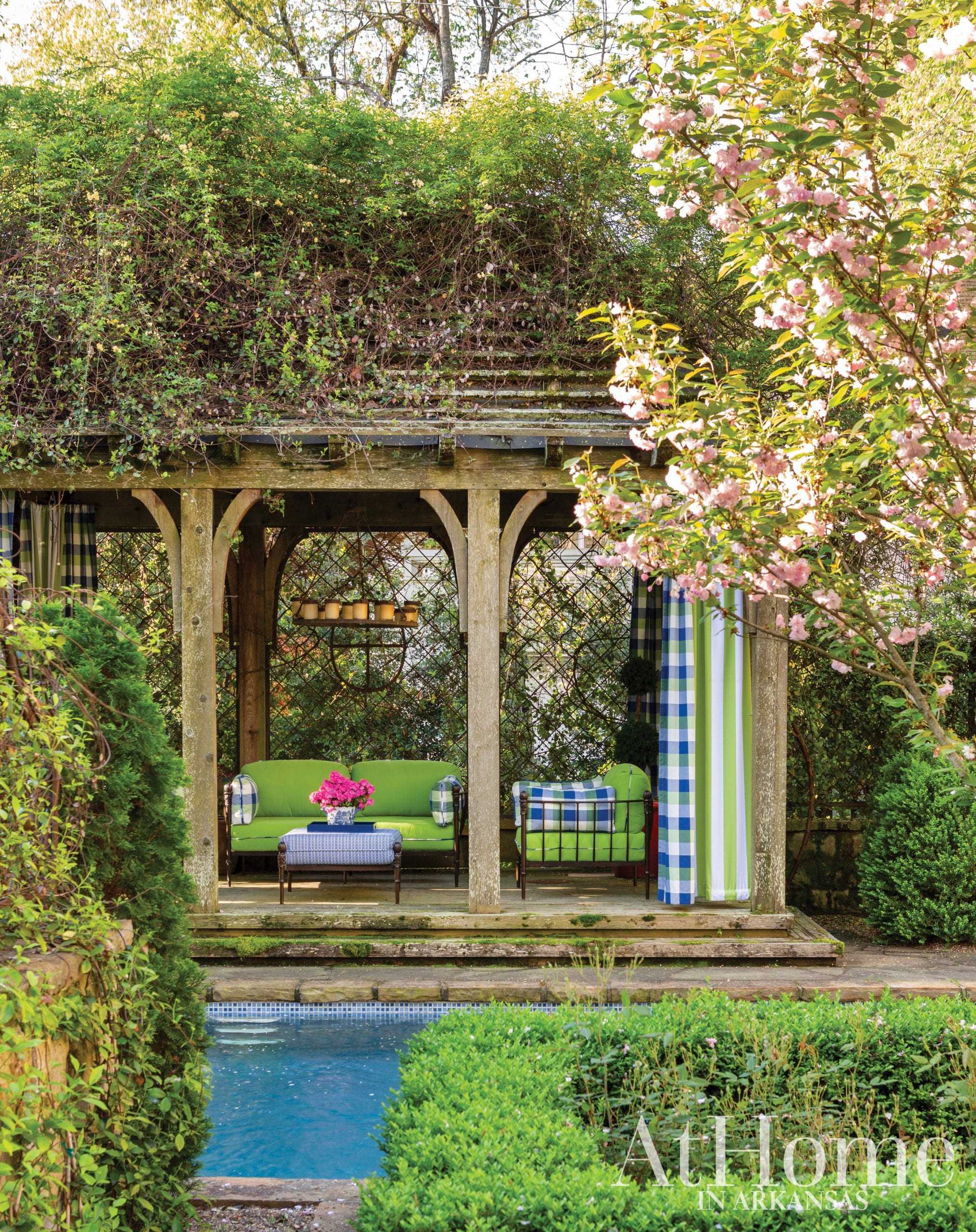 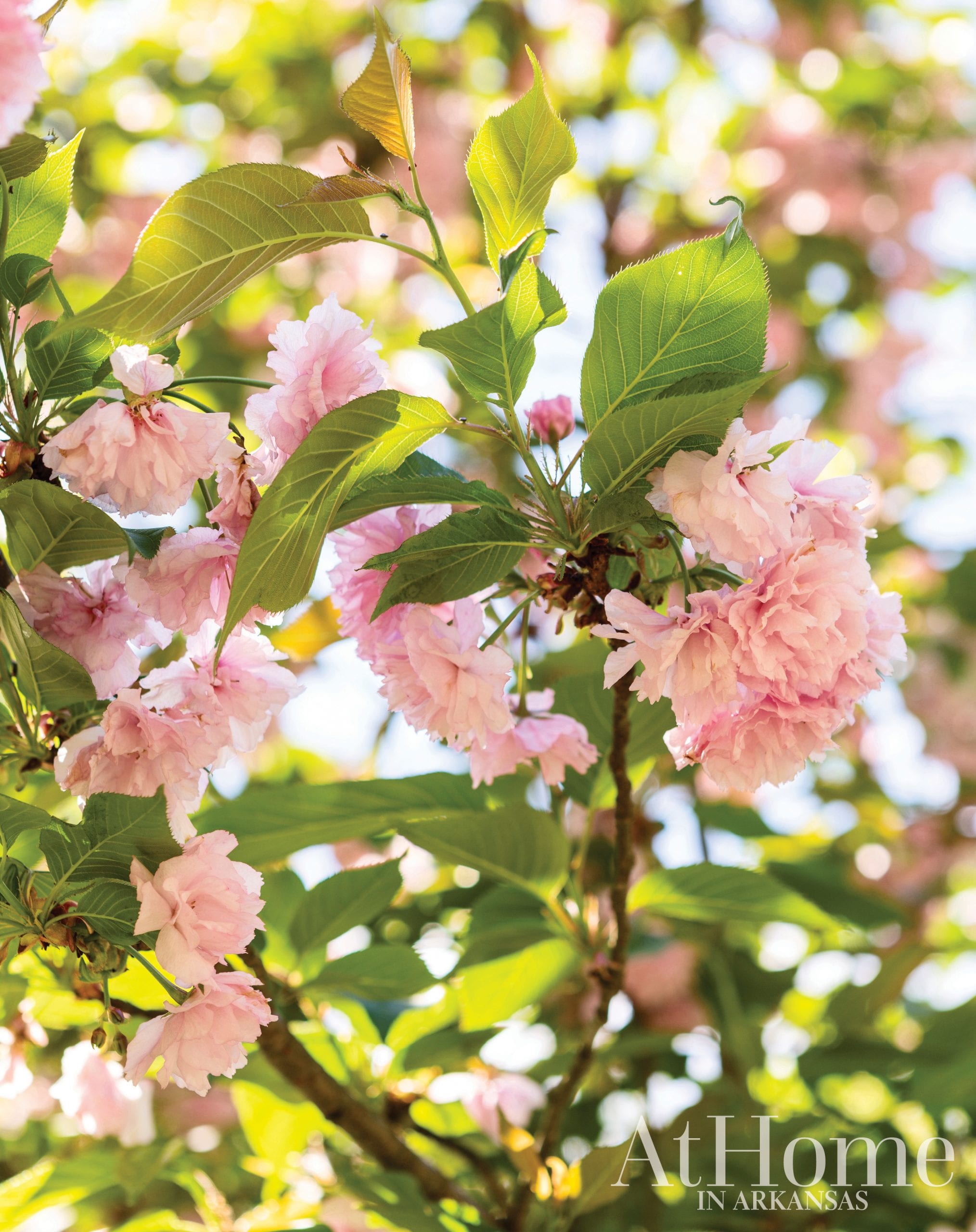 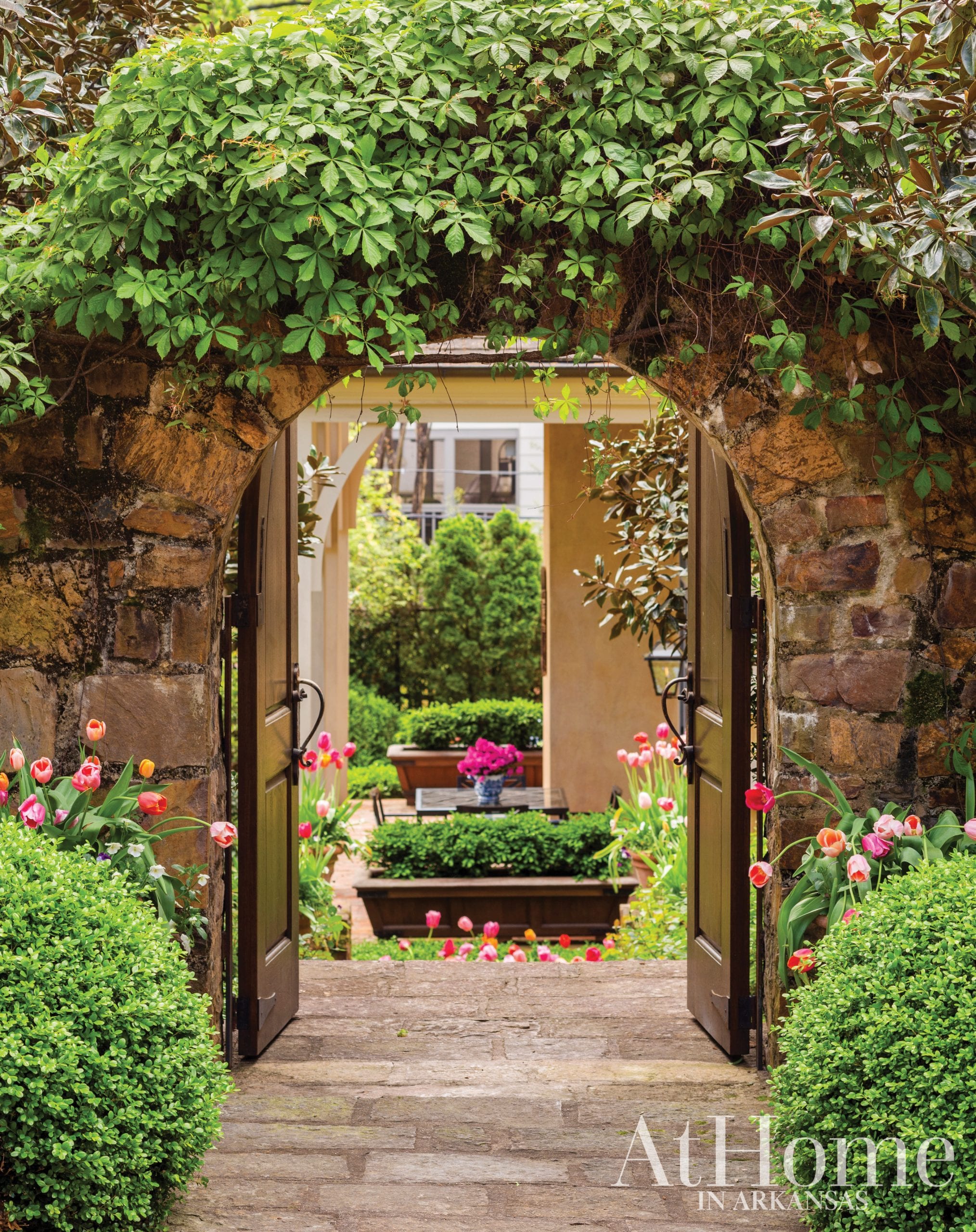 Secret Garden
“I wanted the garden to be complementary in style, but I also wanted it to lure us, if you will, outside,” Kim says. An existing stone wall was enhanced with wooden doors for privacy from the street. Over the entry, Virginia creeper provides year-round texture as well as seasonal color in the fall. 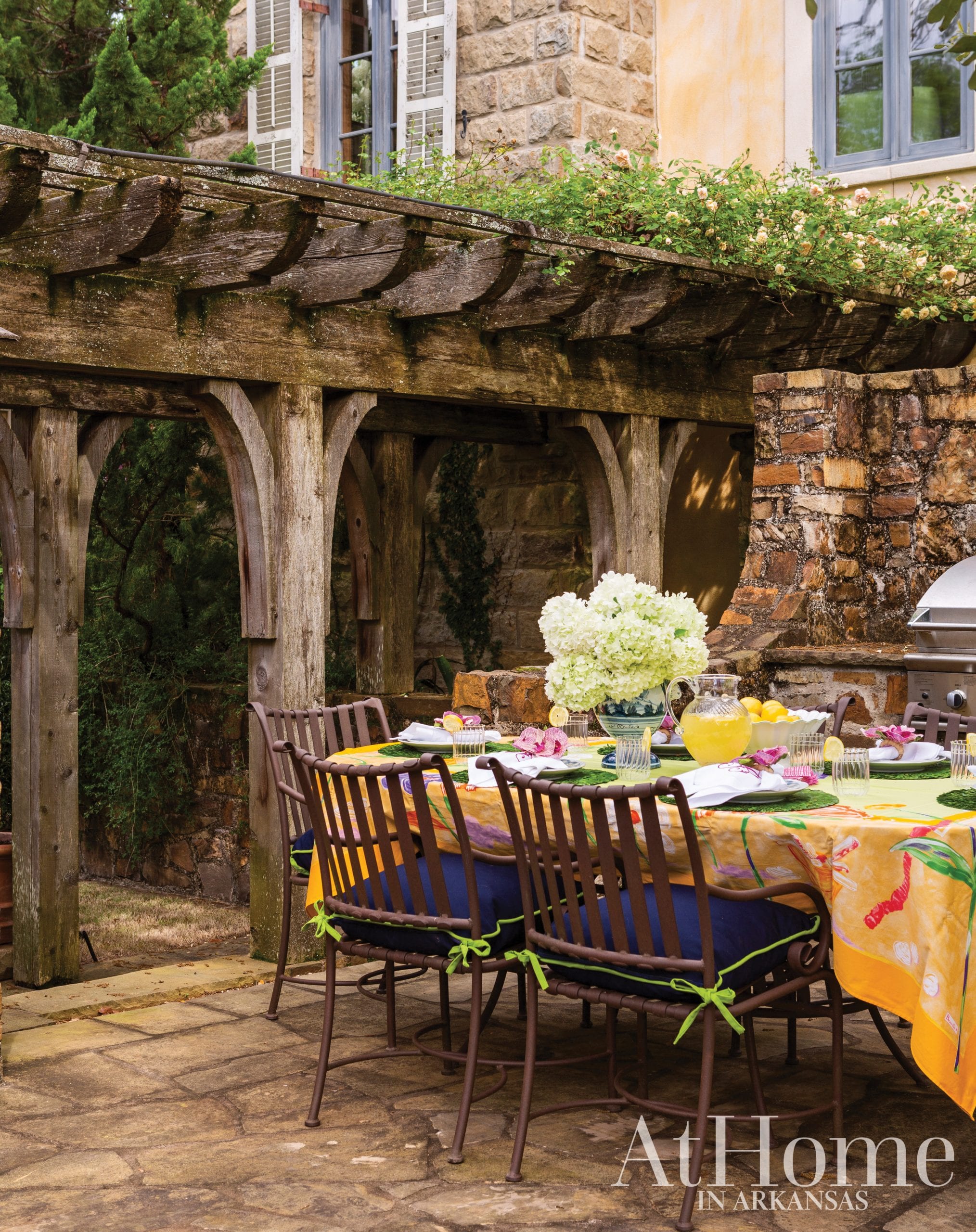 Al Fresco Dining
Allen notes he likes clients to create a wish list before beginning a project. A space for entertaining was at the top of Kim’s. The dining area was designed to be on an axis with a statue at the edge of the house, so there is a sense of order even if it doesn’t register fully with the eye. Having lived in the home for 20 years now, Kim recently completed a refresh of the interiors and brought some of the bold, lively colors into the garden through fabrics and linens. 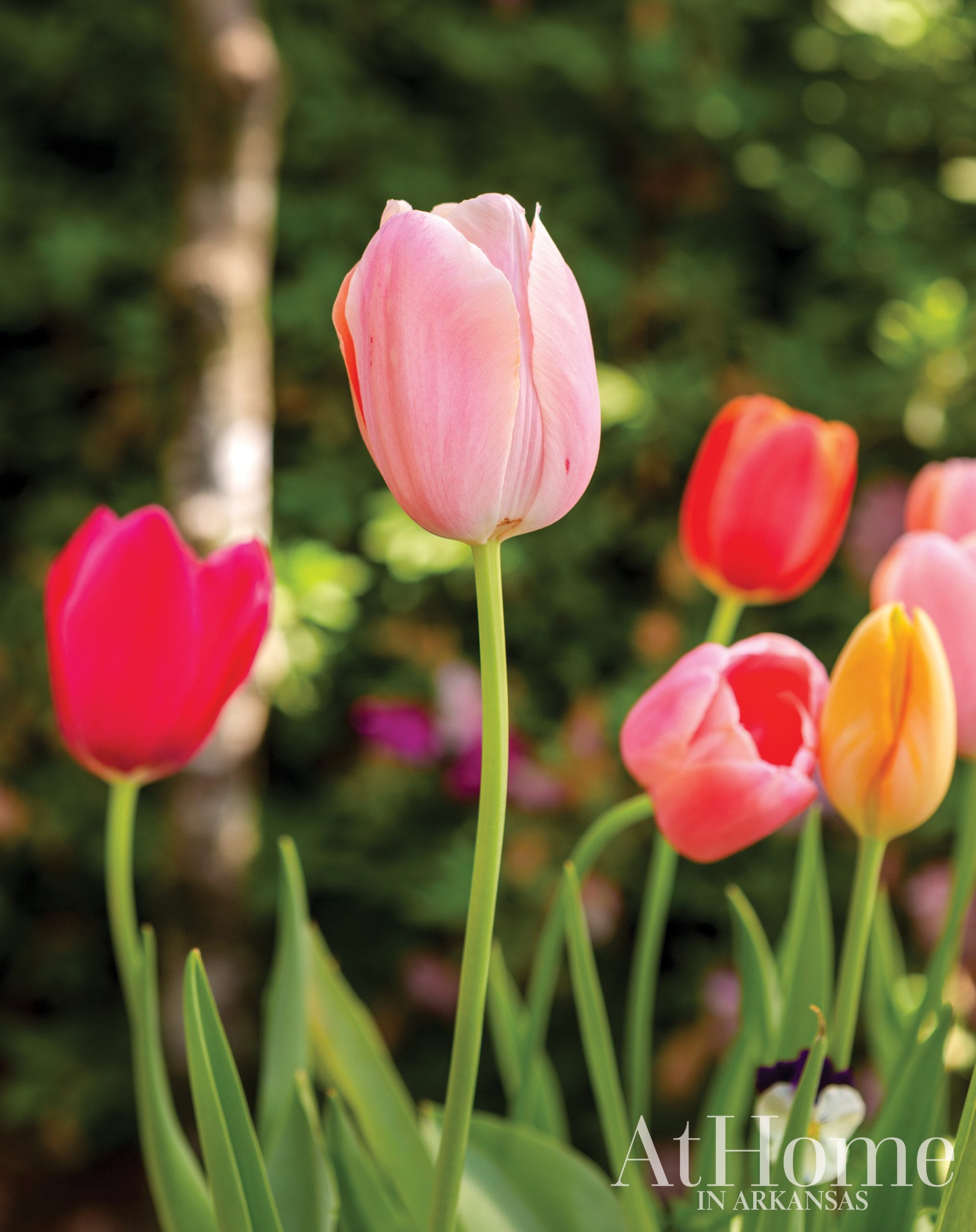 “This garden is a stage with different actors coming on and off.” —P. Allen Smith, landscape designer 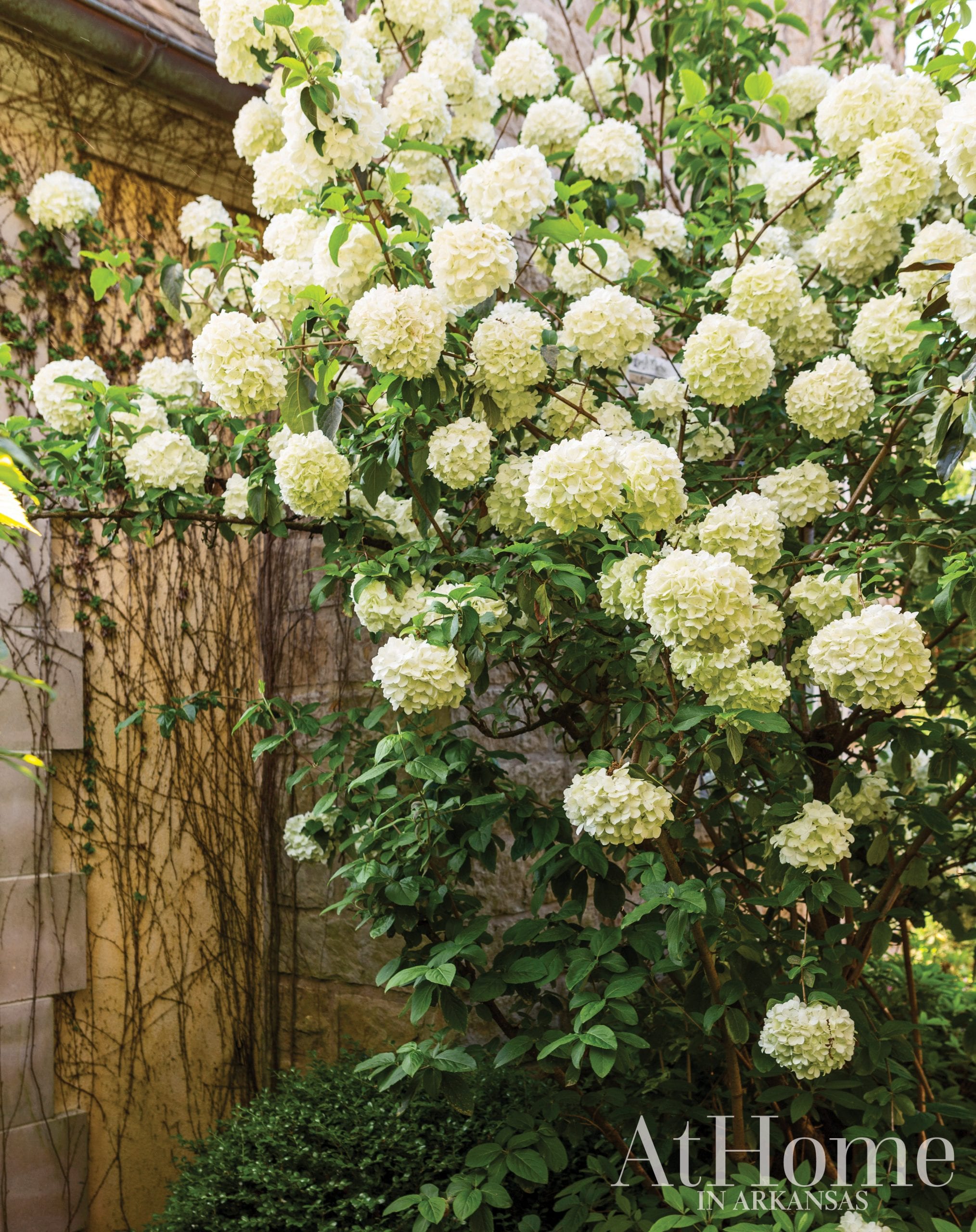 Several of the garden’s additions were planted with the idea of cutting stems to enjoy in vases, including a Chinese snowball viburnum shrub, which produces hydrangea-like blooms in early spring. 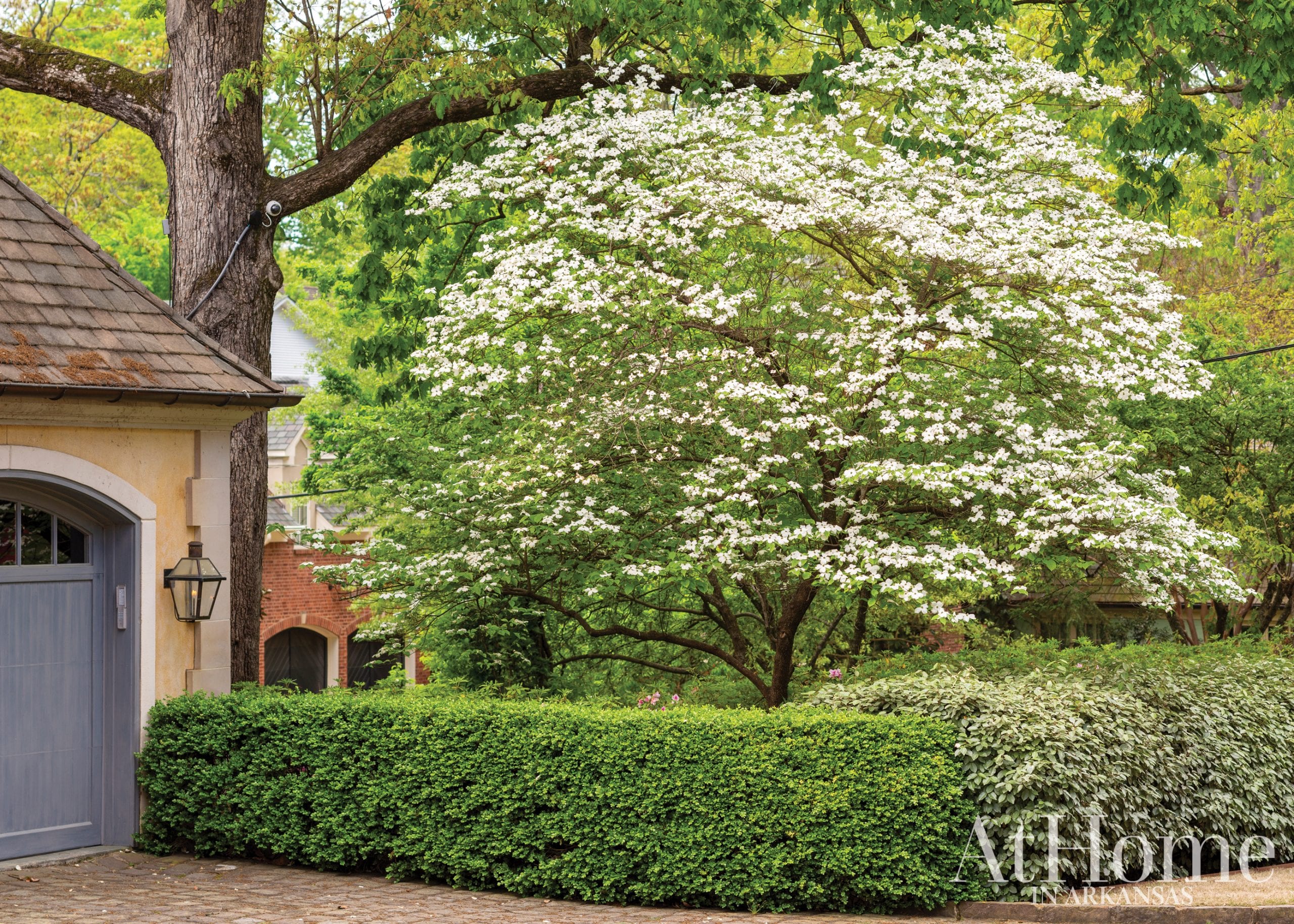 Near an outbuilding, a dogwood tree is surrounded by a hedge of boxwoods and elaeagnus, which has a chalky gray coloring and texture that complements the home’s exterior. 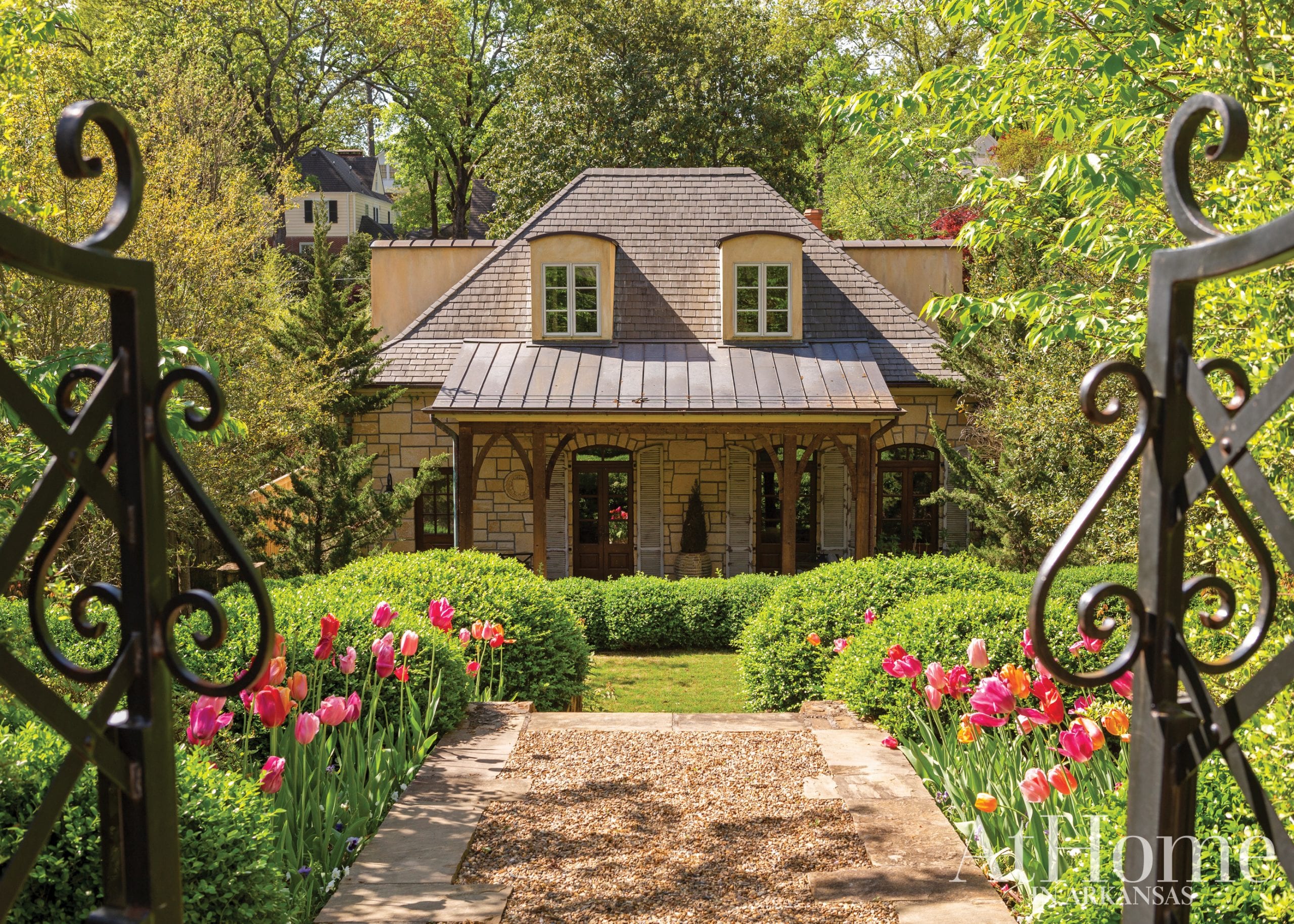 Part Deux
After finishing their initial garden, the couple bought an adjoining lot to build a guest house, which includes Kim’s design studio and an office for Mark as well as a continuation of the garden. Even though they were completed almost 15 years apart, Allen’s design focused on the repetition of materials and plantings to unite them seamlessly. An iron gate opens to azaleas flanked by a pair of cherry trees and a pebble pathway, which leads down to a lawn and then into the structure. “It is its own garden room of sorts,” Kim says. 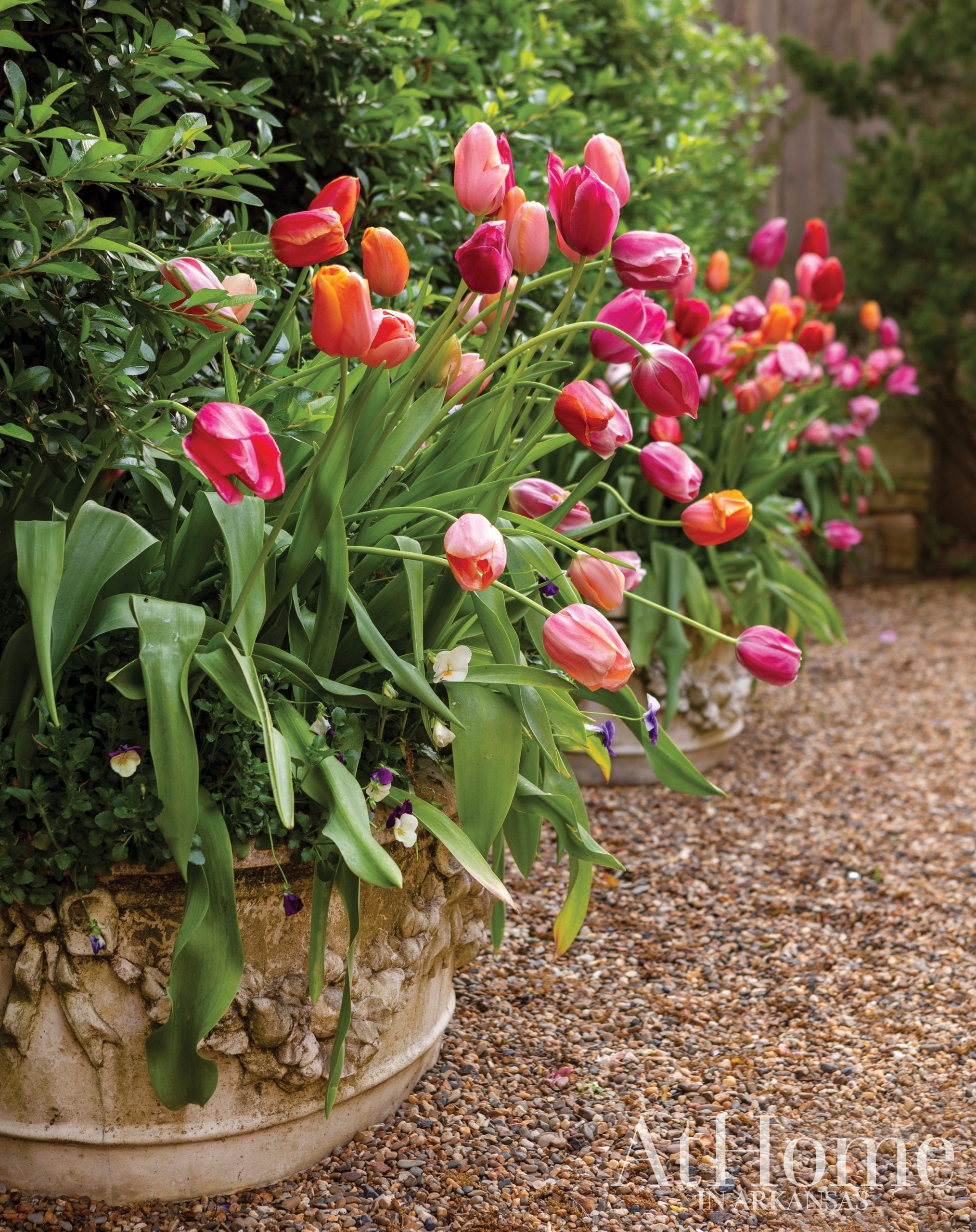 In the spring, containers at the main entry and throughout the garden hold bevies of French tulips. This blooming season is a favorite time for the Brockintons as bold splashes of color come alive in almost every direction. “Allen says it screams, Stop the car, and I love that,” Kim says.