A doctor-turned-designer infuses her family’s home with her signature, livable style 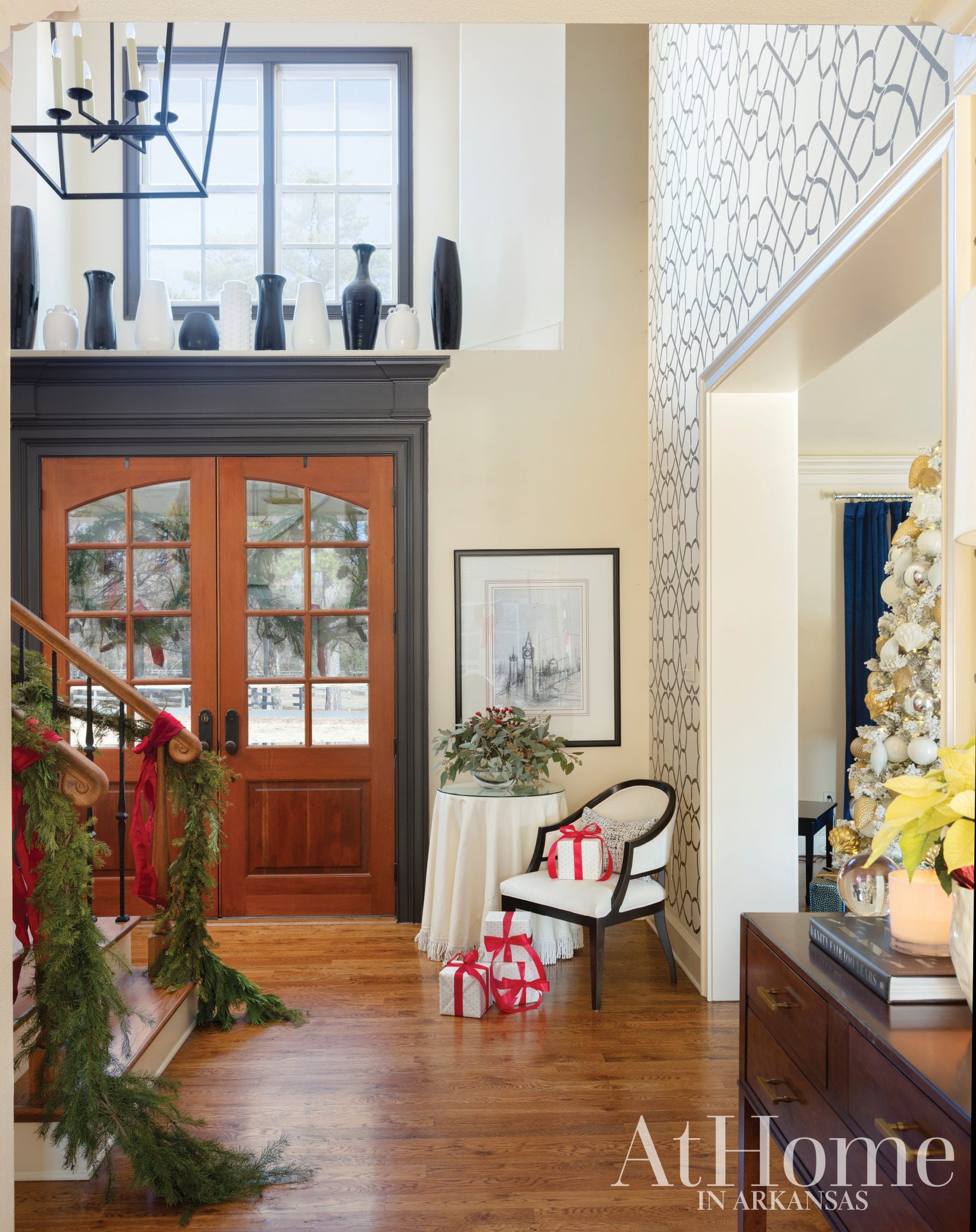 Growing up I wasn’t even aware interior design was a thing,” says Kricia Palmer. As a former pediatric allergist/immunologist, she first became intrigued with design while she and her husband, Jon, were both in medical school. “During my residency, we watched shows like Trading Spaces, and I realized this was something I was drawn to,” she says. “We were poor med students at the time, and I loved playing around with our house.”

When they became parents to two boys, Grant and Jude, Kricia left medicine to stay home with her sons. During this time, her curiosity about design was piqued again, leading her to earn a degree in the field a couple of classes at a time at the University of Central Arkansas. Upon graduating, she worked for local designer Tobi Fairley before developing her niche business: House Calls for Physicians. Here, she designs specifically for other women physicians around the United States—all remotely. Kricia does the creative work, from selecting fabrics and space planning to specifying materials and furnishings, but allows the client to handle procurement and installation on her own timeline. “I think my business came at a time when it was really needed—right at the start of the pandemic,” she says. “Women physicians were under an extreme amount of stress, and it’s important to be able to come home to a house that is restorative and rejuvenating.”

As for her own family’s home, Kricia notes she and Jon purchased the house in 2017 after being drawn to its wooded location on the outskirts of Little Rock. Since that time, they have embarked on a journey to personalize the spaces, tackling major updates in the kitchen and smaller, more cosmetic projects in the main bedroom, living room, and entry. “My style has evolved since the early days,” Kricia says. “I like traditional lines but bolder colors, and I prefer to use patterns sparingly. I think every space I design has a cheerful touch to it.” 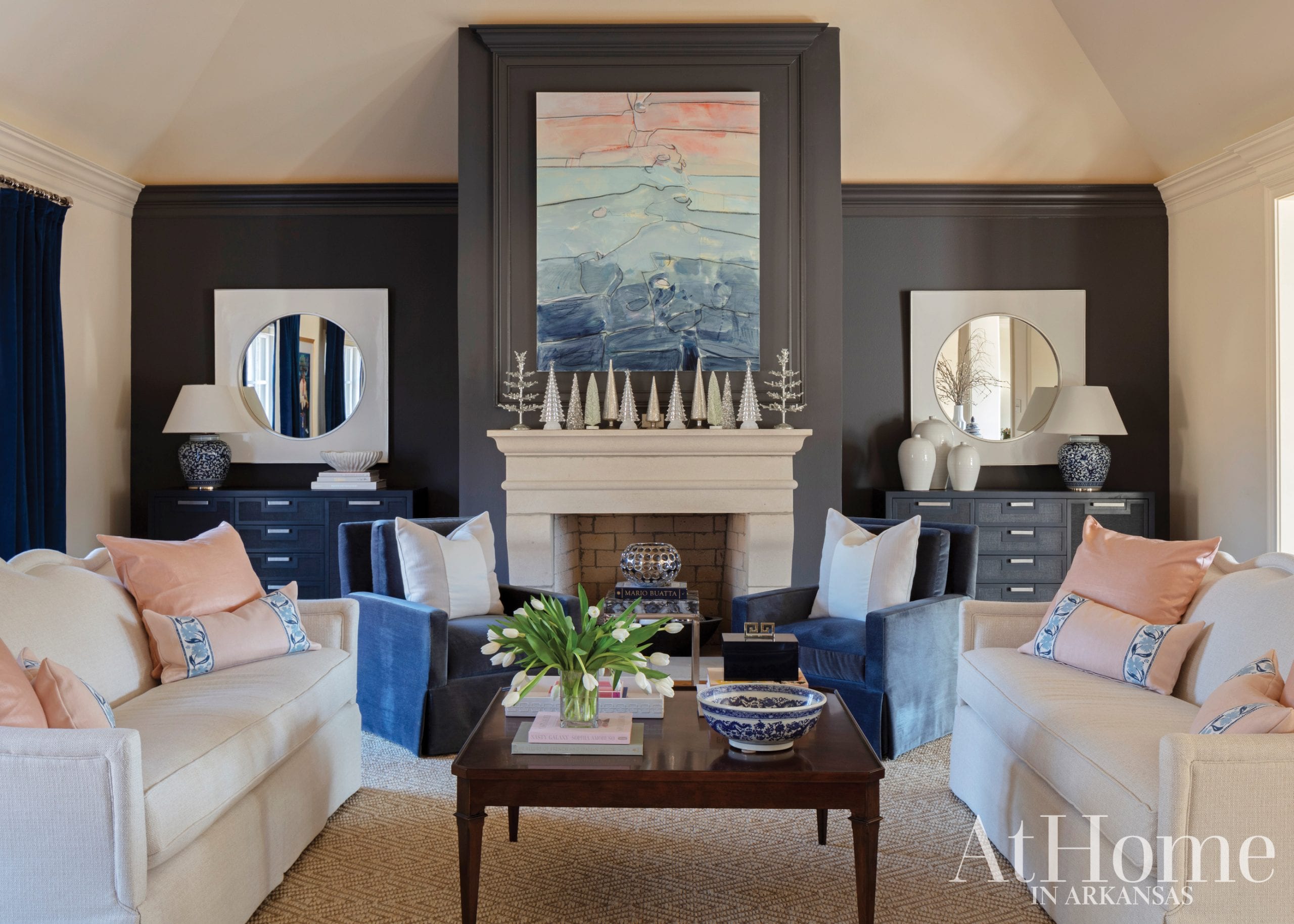 Room to Relax
In the great room, Kricia opted for a fresh take on pink and blue. The neutral backdrop is grounded with an accent wall in “Peppercorn” by Sherwin-Williams. Local artist Bryan Frazier was commissioned to paint the abstract piece seen over the mantel. Large-scale sofas create a comfortable conversation area, which was a priority for the Palmers. “We opted not to put a TV in this room, so there’s not the temptation to go to that,” Kricia says, noting the family comes here to listen to music and catch up on their days. 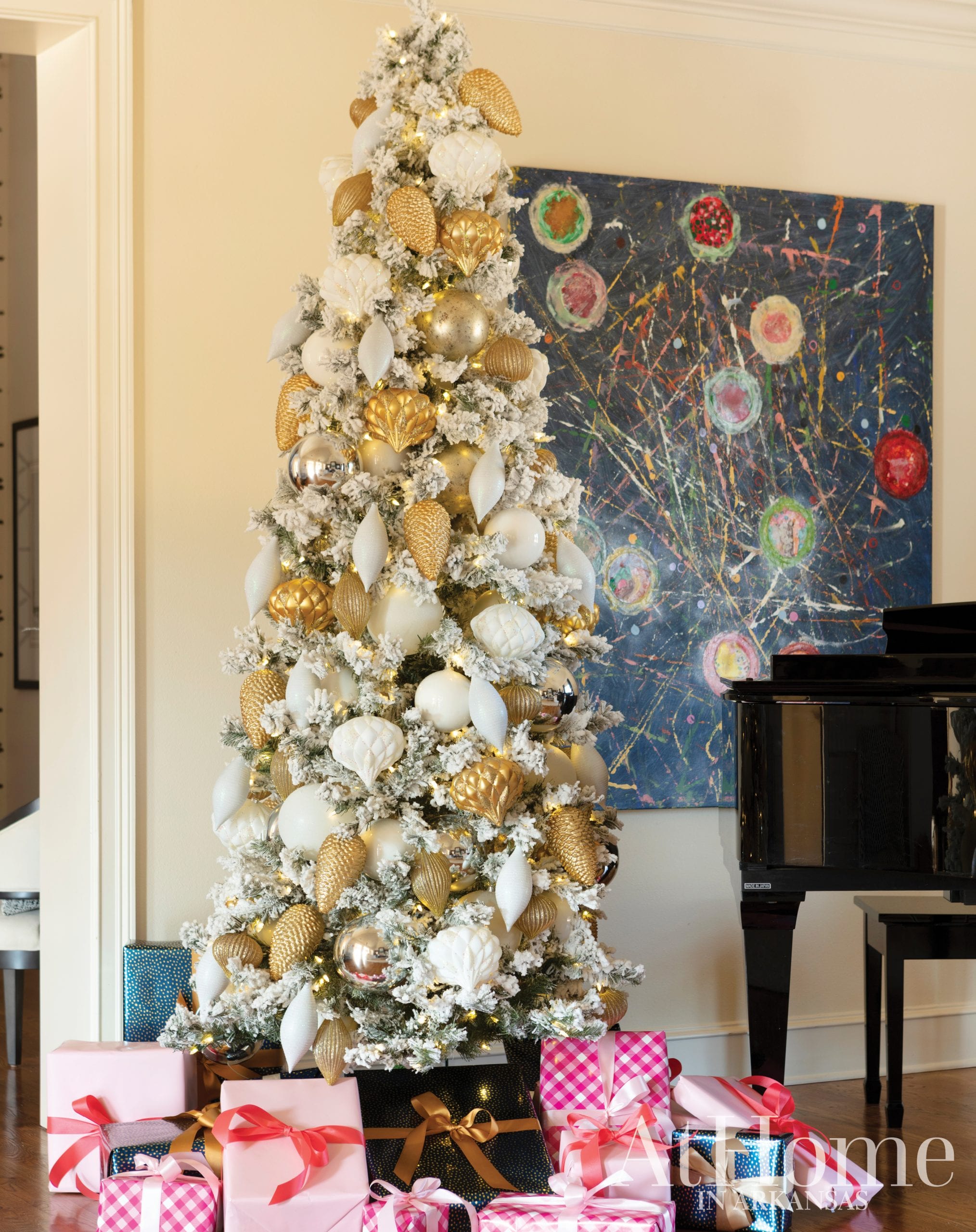 The Palmers’ oldest son, Grant, had a hand in creating the artwork seen behind the piano. He and fellow students at ACCESS Schools worked alongside artist Hamid Ebrahimifar as part of a class project. 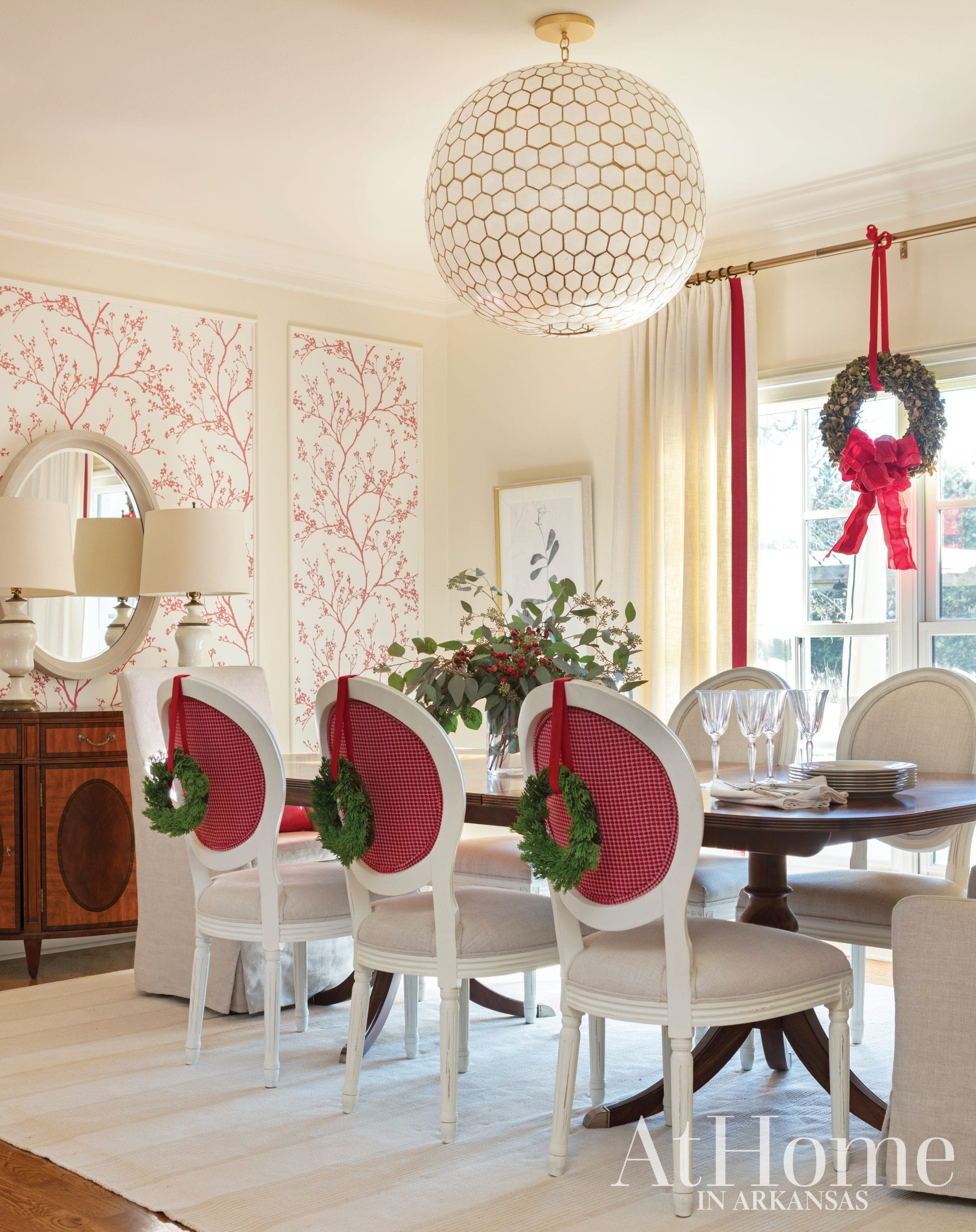 Fresh & Fun
“Guests see the dining room immediately when they walk in the front door, so I wanted it to be a focal point,” Kricia says. To achieve this and coordinate with the framed wallpaper panels, she reupholstered the chairs in a lively red and pink fabric. Simple wreaths hung with red ribbon and an arrangement of eucalyptus and berries lend an air of traditional Christmas style. “When I walk in this room, it is so light and cheerful that it just makes me happy,” the designer says. 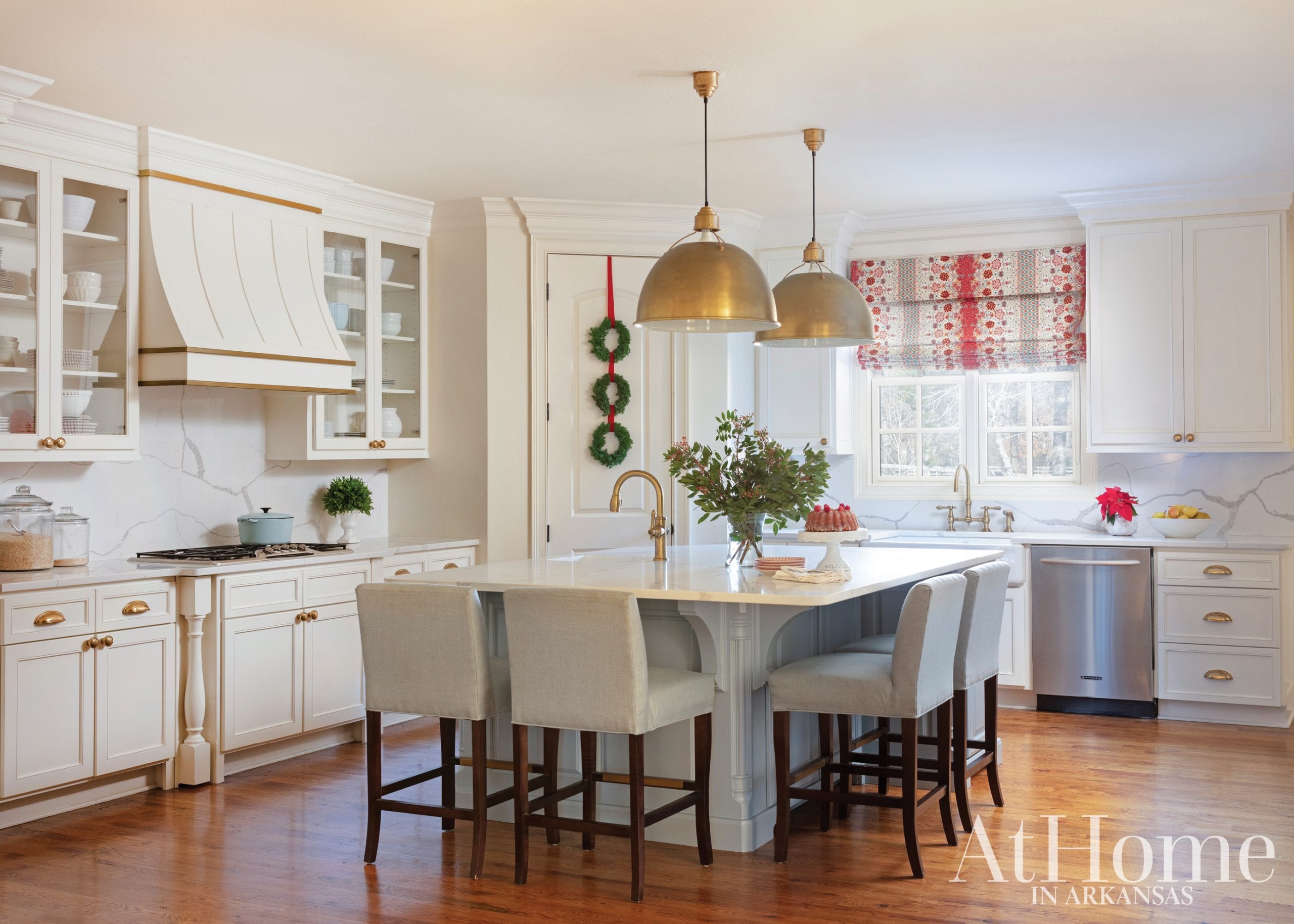 Responsible Renovation
The most extensive of the Palmers’ updates took place in the kitchen. “We really tried to be smart in terms of sustainable design here,” Kricia says. For example, they used the existing base cabinetry but updated it with new doors; they were able to remove and sell the upper cabinets to a family who planned to use them in their own makeover. Kricia lightened an existing black island with a coat of white paint and used light, quartz countertops throughout the room. “This space felt heavy before, but now it’s like a breath of fresh air,” she says. 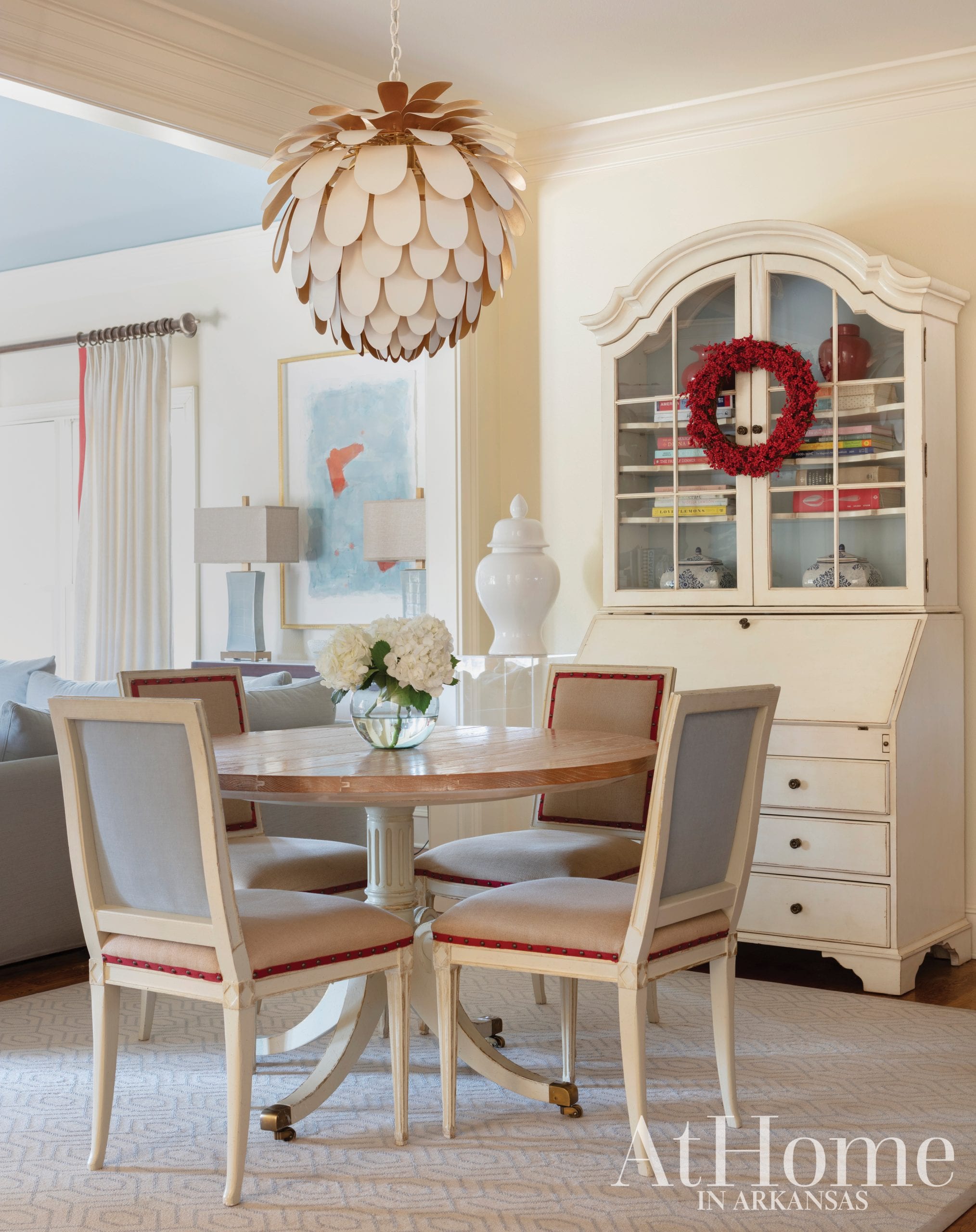 In the breakfast nook, neutral chairs trimmed with red tape play off the drapery panels in the adjoining family room. A modern Visual Comfort chandelier, inspired by the shape of an artichoke, adds whimsy to space. 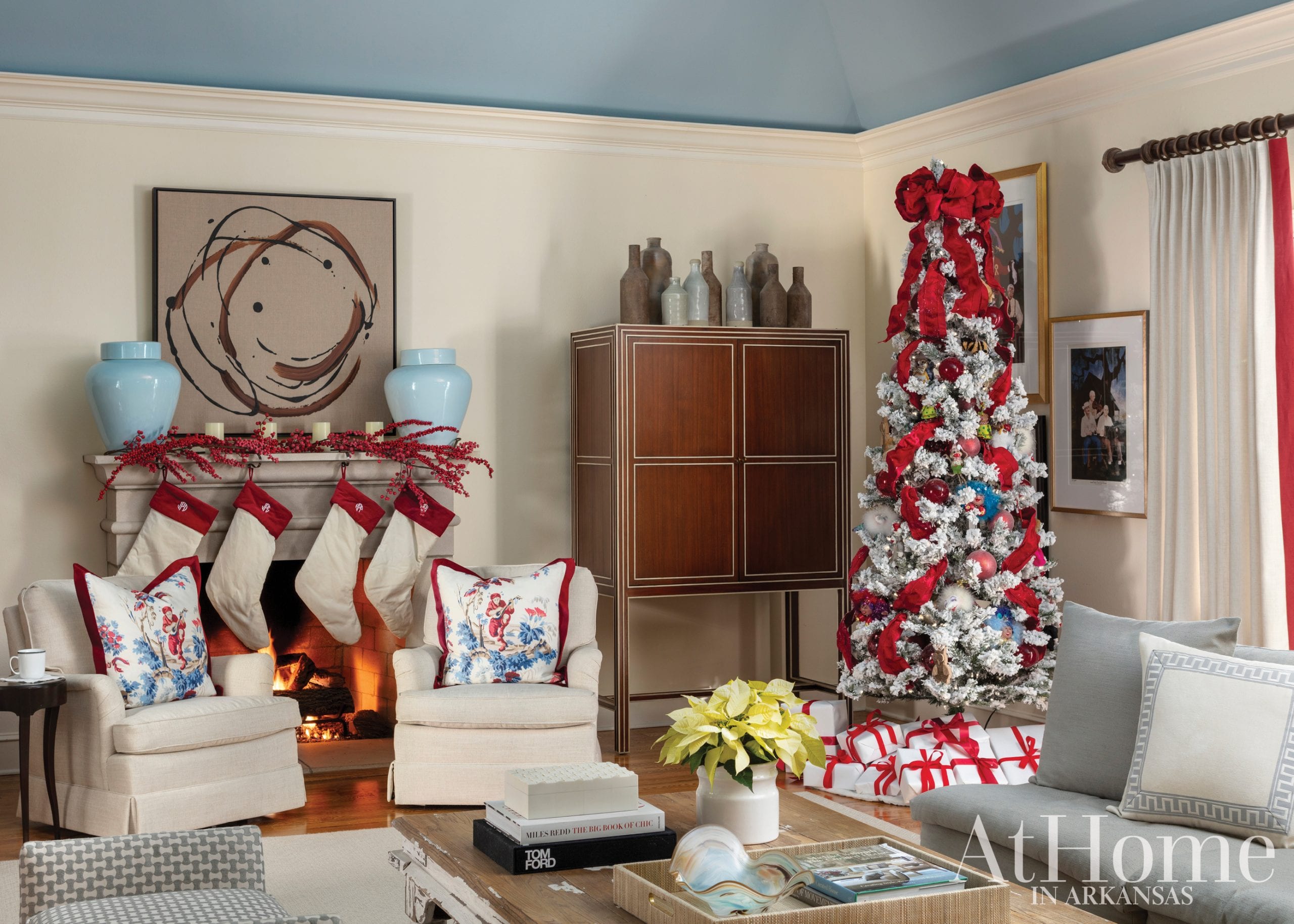 Meaningful Mementos
The family room off the breakfast nook is where the Palmers spend Christmas morning. “This tree is very special to us because it is filled entirely with ornaments Jon’s aunt has given him since he was born,” Kricia says. To bring a coziness to the comfortable gathering space, she painted the ceiling in a grounding blue. 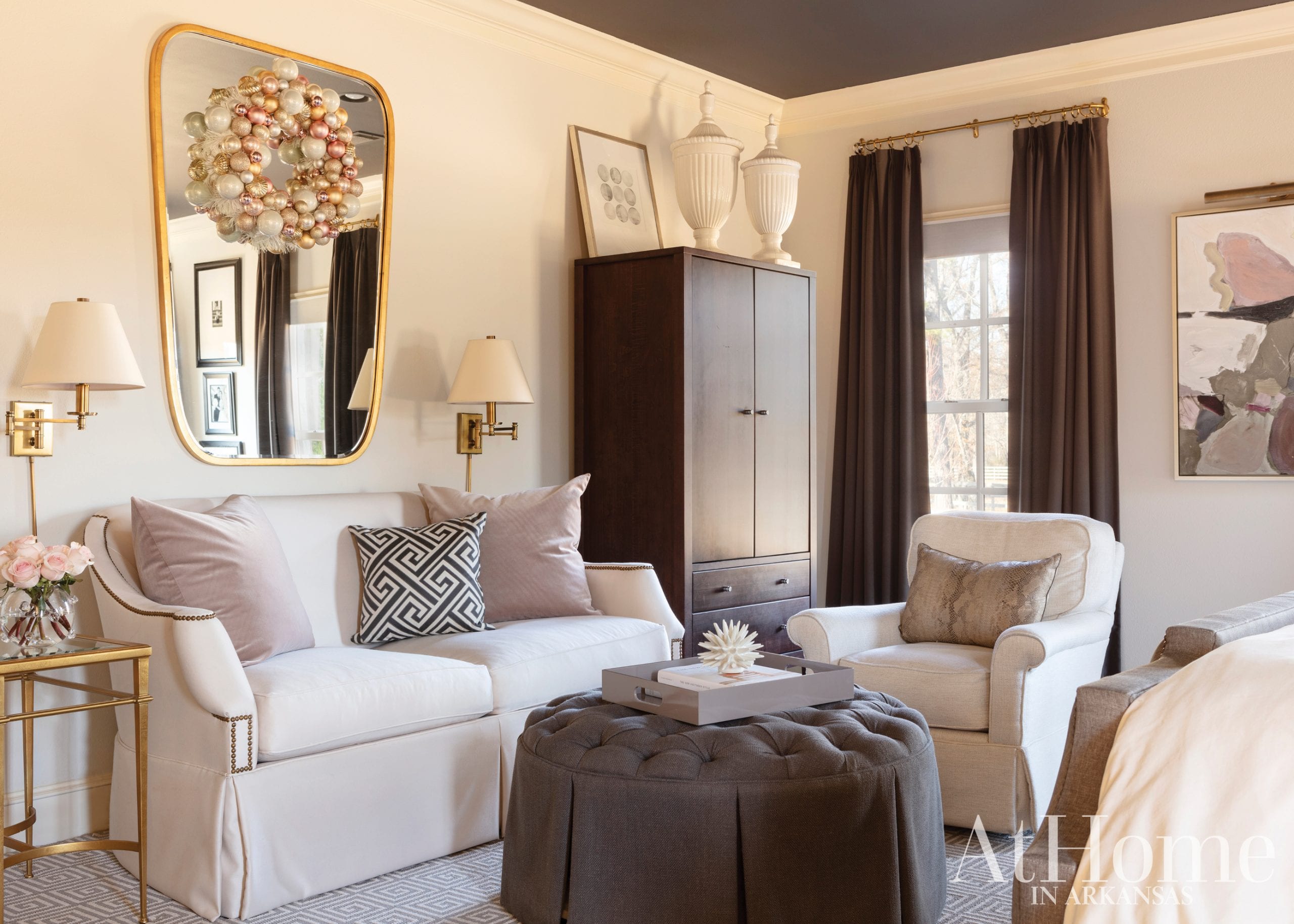 “I think every space has a cheerful touch to it.” —Kricia Palmer 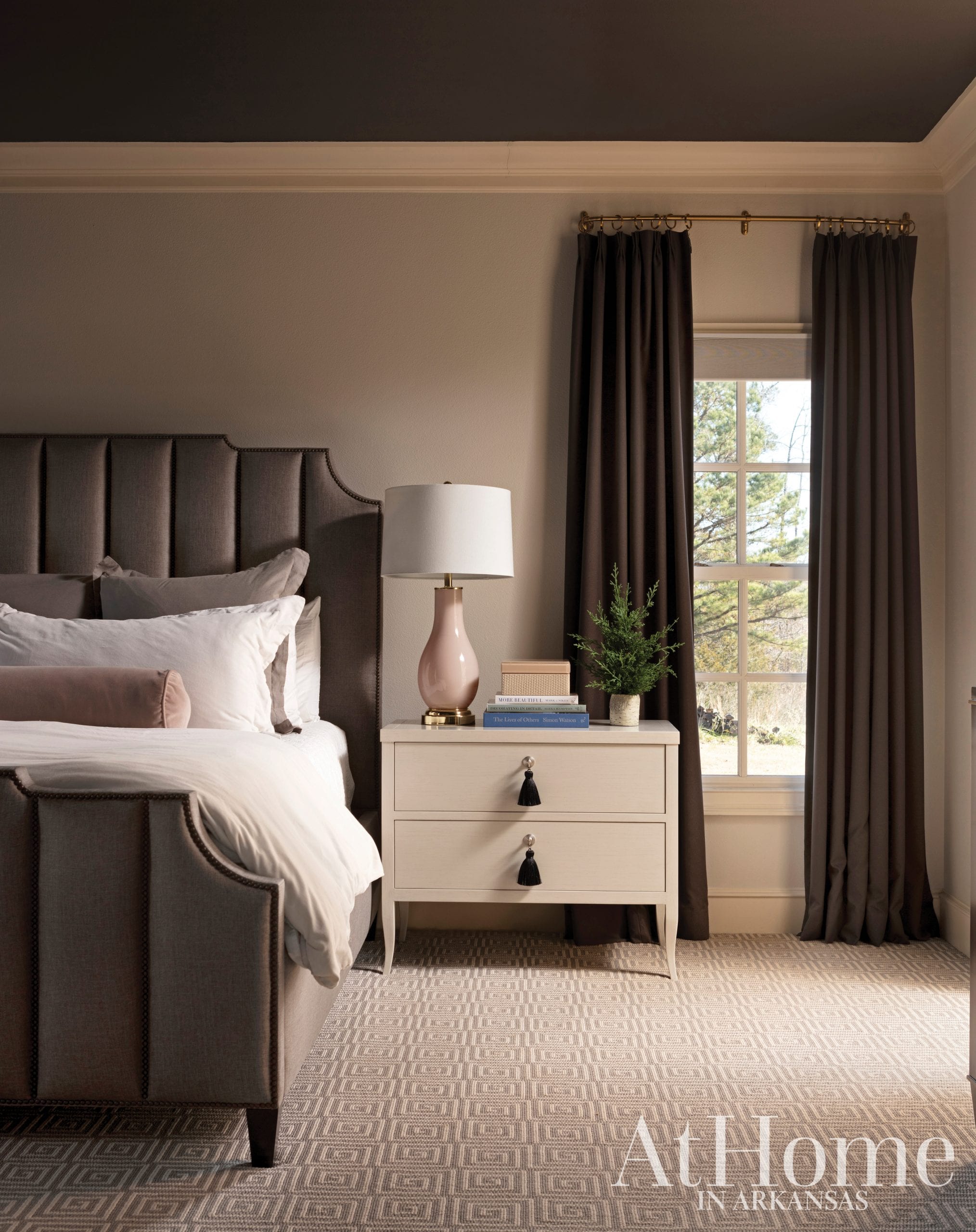 All is Calm
“I wanted this space to be a little moody but still feminine,” Kricia says of the primary bedroom. To achieve this blend, the designer mixed rich, charcoal gray foundational pieces with blush accents. Underfoot, the carpet brings pattern to the space that is balanced by a number of solid-hued selections in cozy textures such as velvet.