A Little Rock couple faced a design dilemma when outfitting the master bathroom in their downtown high-rise condominium. While they enjoyed the panoramic views of the Arkansas River, Clinton Presidential Library and city skyline from the room’s expansive windows, they also wanted to maintain a sense of privacy. Similarly, though the space had modern lines, they were interested in creating the kind of luxurious retreat they had enjoyed during hotel stays in Paris. So they turned to interior designer Bill Beringer for assistance in creating a space that emphasizes the view within an elegant and relaxing setting. 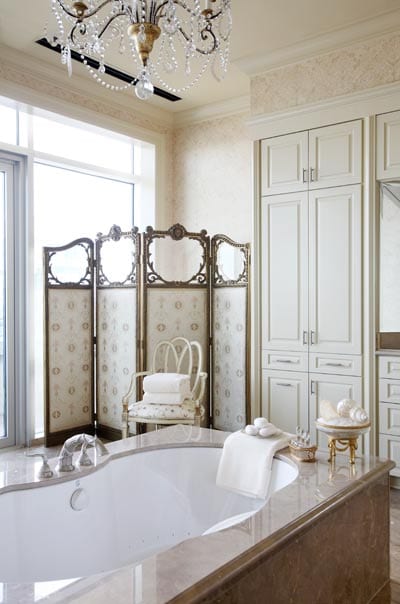 To offset the industrial appearance of the floor-to-ceiling windows, they began by framing the glass with partial walls, allowing for views while preserving privacy. Trimmed with crown molding, the walls help the bathroom feel more like a home interior and less like a contemporary condominium.

A large BainUltra air-jet massage bathtub with a heated backrest serves as the room’s dramatic focal point, centrally positioned to capitalize on the views while bathing. The tub is flanked on either side by identical cabinetry and sinks with ample vanity space and three-way mirrors for each homeowner. “Symmetry is huge with me,” laughs Beringer, who says it creates a more formal space. A chandelier hanging above the tub adds a touch of sparkle, and a built-in steam shower and separate water closet are located opposite each other at the back of the bathroom for complete privacy in those areas. 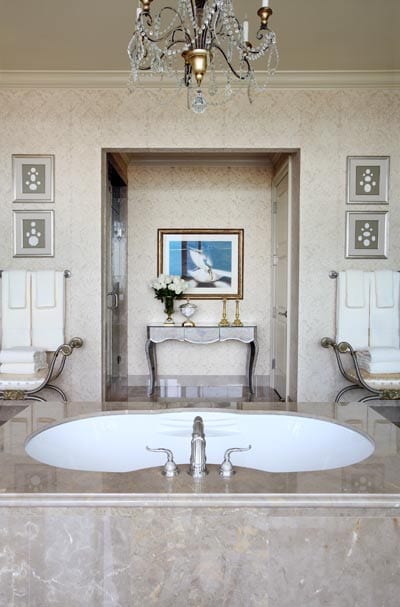 Beringer decided to go with a beige color scheme to match the homeowners’ choice of Kona Beige marble, which encases the tub and is used for the floors and countertops. “When you do more of the same color it expands the space,” Beringer says of the 380-square-foot bathroom. He chose paint in a similar beige tone for the trim and matched the wallpaper for a serene effect. “I think contrast between walls and woodwork creates dizziness,” he says. “There’s a lot going on in this room but it’s not busy.” Brushed nickel hardware with a ribbon and reed pattern complements the serene style. 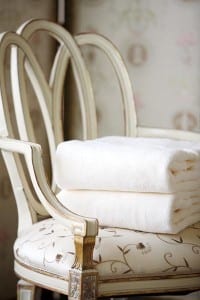 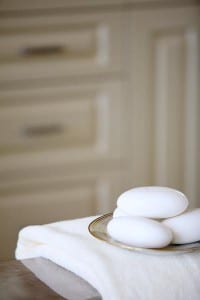 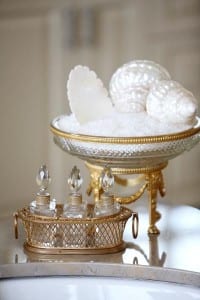 A pair of Empire benches and a Louis XVI-style four-panel folding screen complete the luxurious look of the room. In combination with the eagle’s eye views, lavish bathtub and other amenities, Beringer’s careful placement of framed intaglios and art on the walls, and attention to detail with smaller luxuries—fluffy towels, porcelain soap dishes, perfumed soaps and bath salts—make this high-rise bathroom more than simply a relaxing retreat. As Beringer puts it, “Truly this is a bath that even Marie Antoinette would enjoy.” 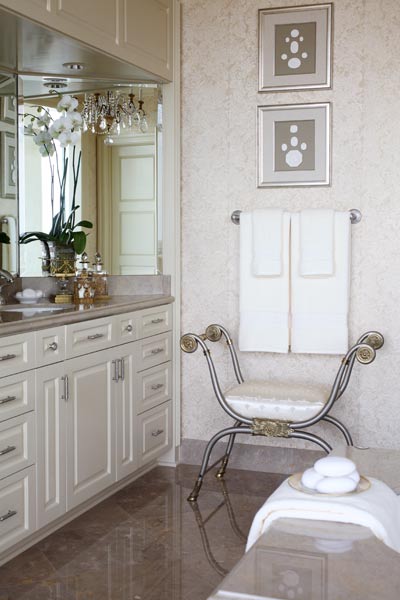