When it comes to earth-friendly living, one of the first principles is to stay put. Don’t tear down an existing home and build back bigger, or find a natural habitat and replace it with a large new home.

That’s the concept philanthropists Jim and Nancy Blair employed when they began strategizing ways to include an office at their residence. Having lived in the same house on a tree-filled mountainside in Fayetteville since the 1970s, Jim was predisposed to making the home accommodate his and Nancy’s additional office needs. With a goal of staying put, surrounded by the trees and wildlife he’d come to know over the decades spent on the site, he sought a way to sensitively add a new structure to the current setting. 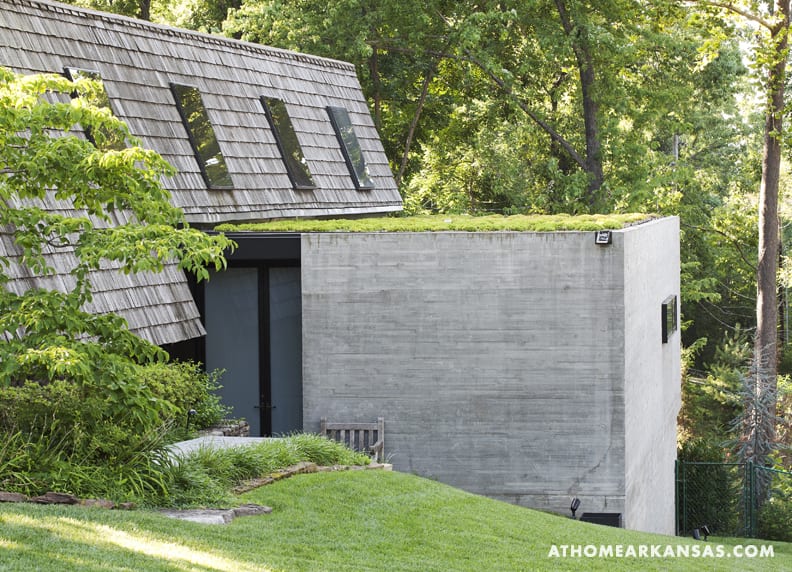 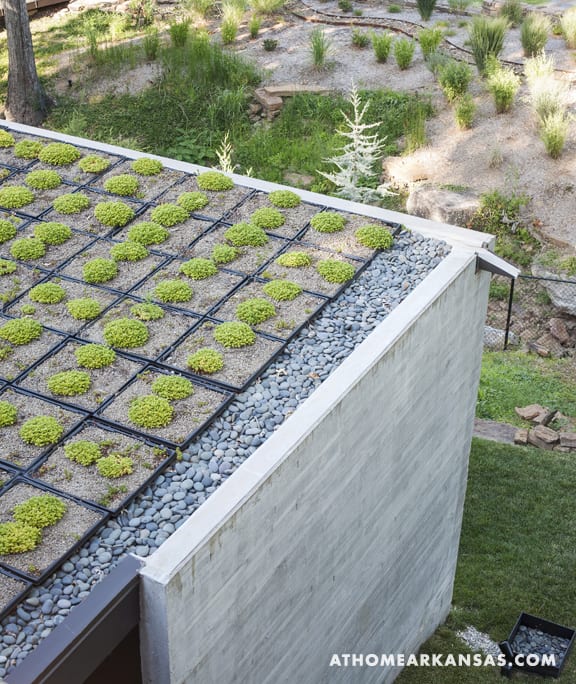 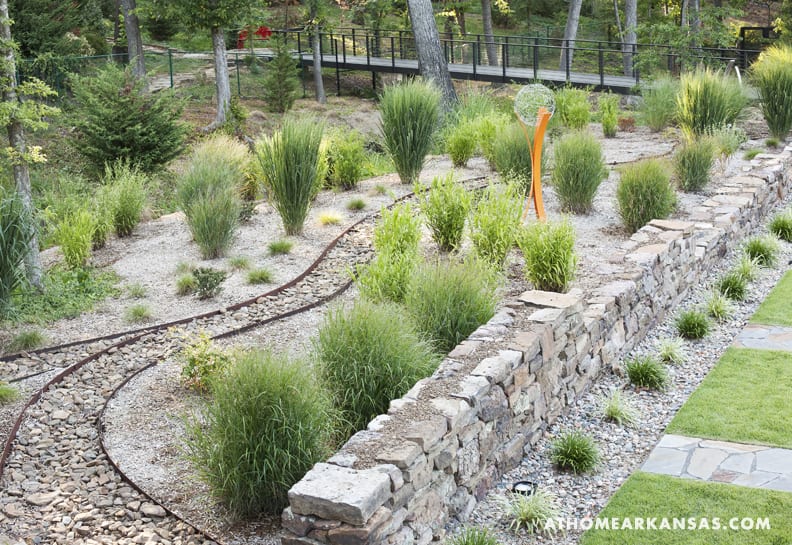 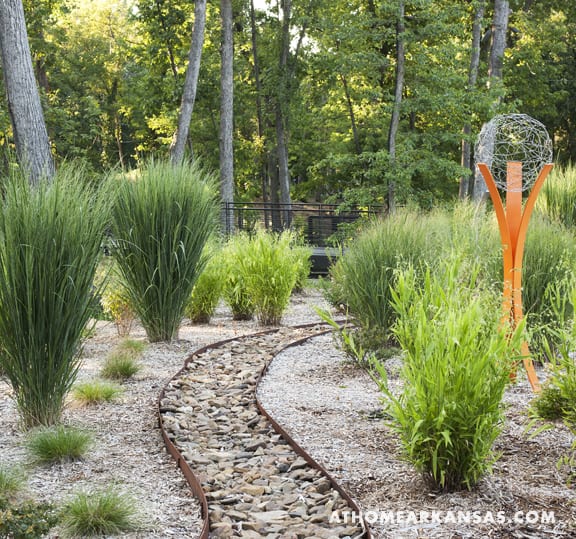 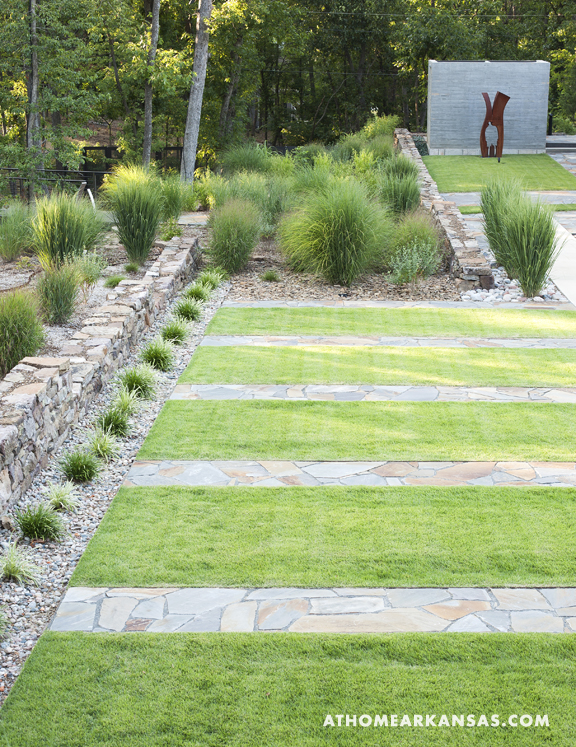 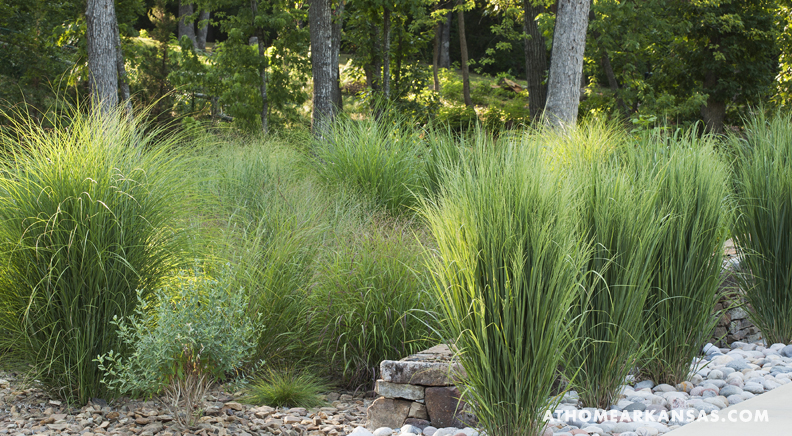 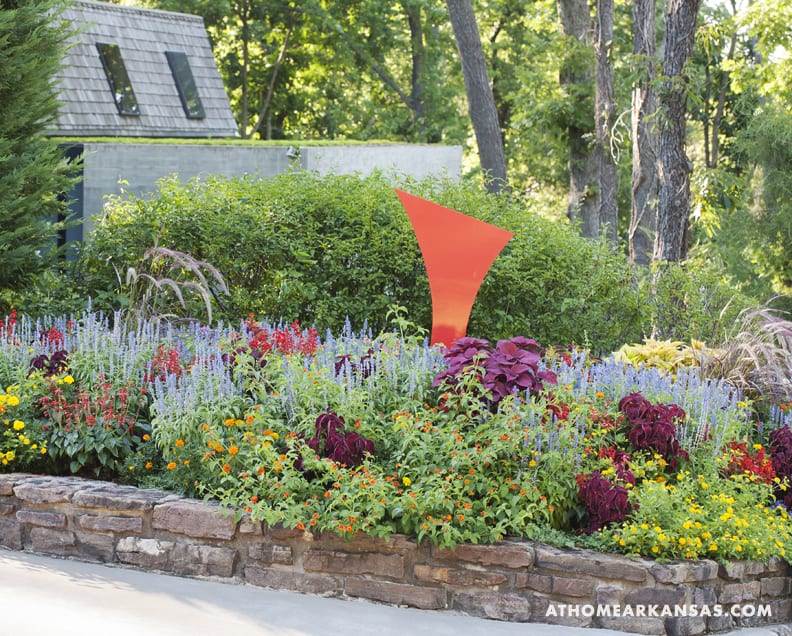 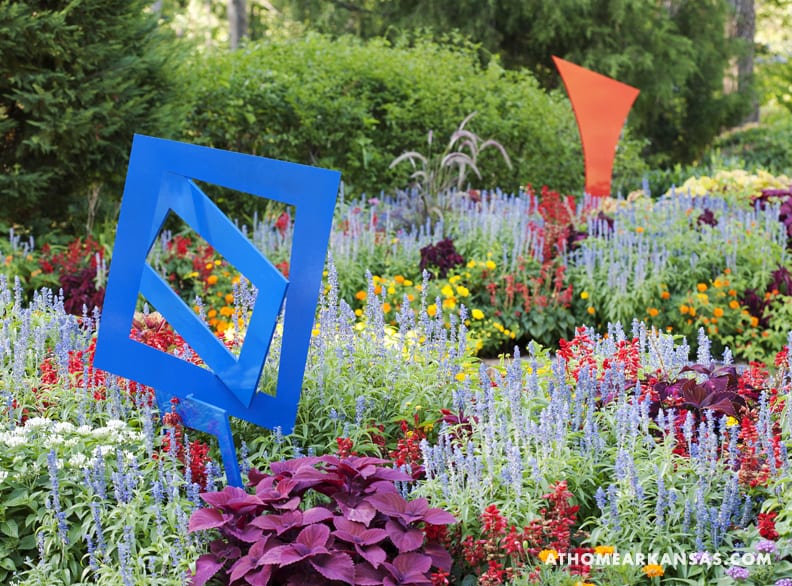 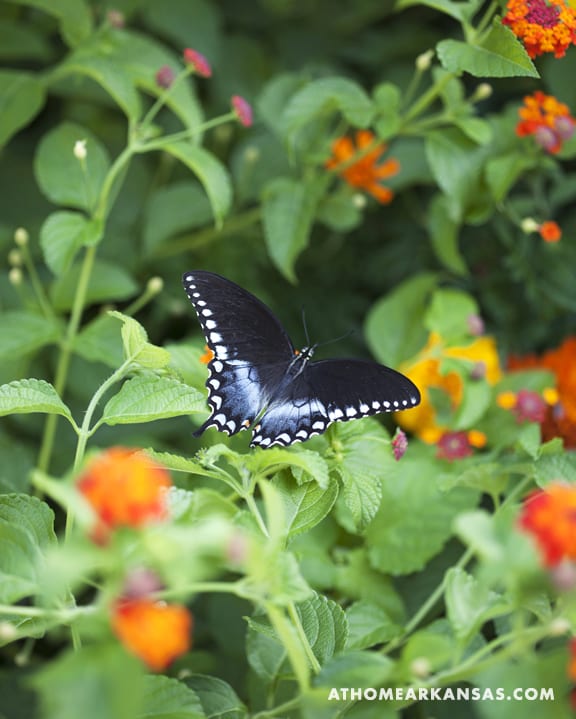 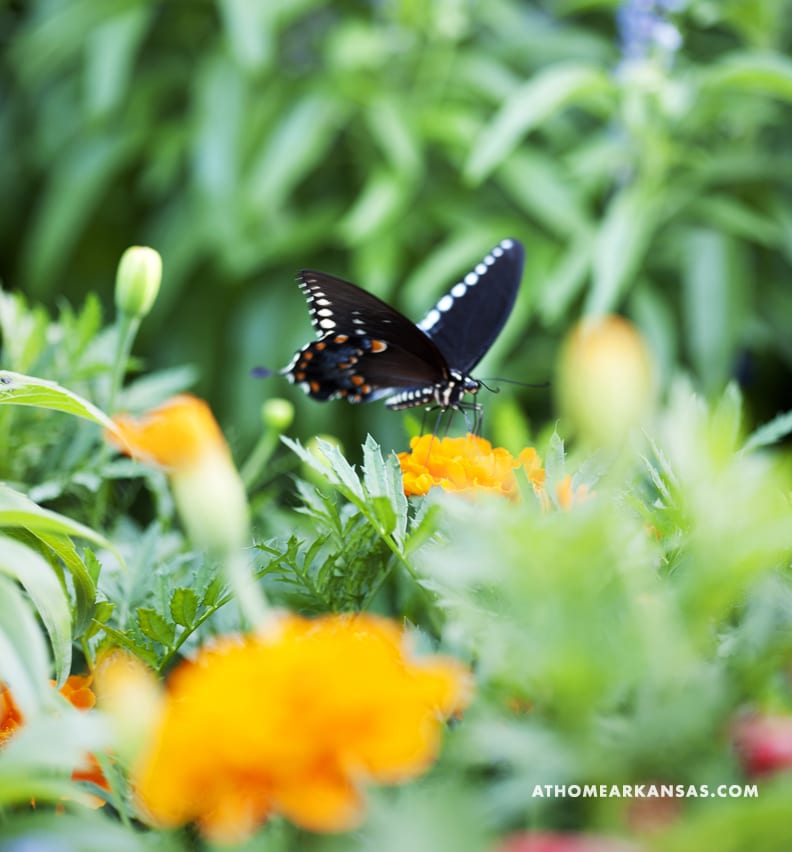 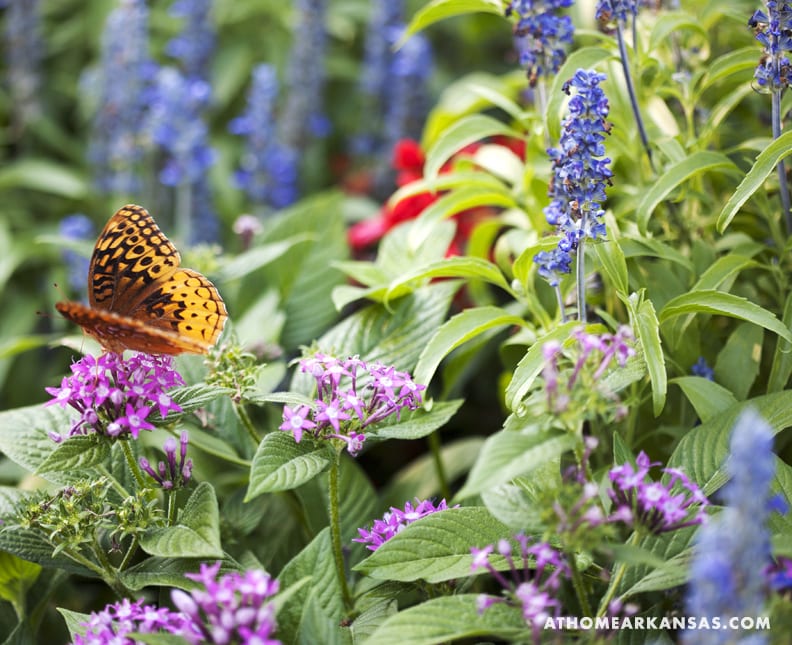 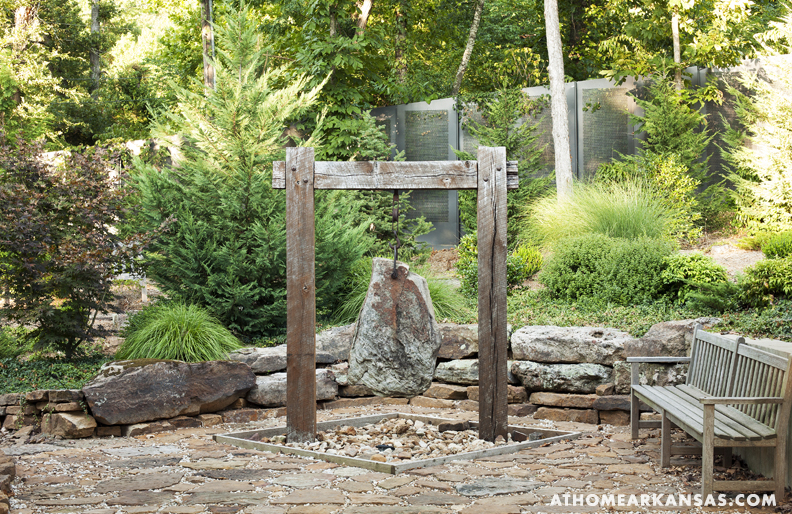 Thinking green is nothing new to Jim, a major force behind Fayetteville’s Blair Library building, which garnered silver certification from the U.S. Green Building Council’s Leadership in Energy and Environmental Design (LEED) program. Jim and Nancy sought the advice of architect Marlon Blackwell, FAIA, who designed a new 1,000-square-foot structure housing the additional spaces the couple needed and tucked it snuggly alongside their current home, minimizing its impact on the property.

Blackwell topped the board-formed concrete addition with a green roof, designed to minimize water runoff and aid temperature control. “From both an environmental and an aesthetic standpoint, green roofs make sense,” says Blackwell, “and they’re easy to install and maintain.” Using a mat and tray system, the roof was planted with a variety of native sedums that will eventually spread to cover the area, and the drought tolerant plants require little maintenance and no additional watering. “They draw water from the air and natural rainfall,” adds Blackwell, “and twice a year, the occasional weeds that seed on the roof are simply removed.”

Nestling the new structure into the hilly site meant dealing with drainage as well, an issue that had long plagued the property during rainy seasons. The Blairs worked with a team of landscape pros to create rock paths and dry creek beds, channeling water down the hillside. Adding native plants, especially grasses and evergreens, helped anchor and soften the paths and beds, as well as adding a variety of foliage among the trees. Within this naturalized area, Jim and Nancy placed favorite metal sculptures as focal points, creating destinations to visit while meandering down the paths.

For family and friends visiting the Blairs, parking pads at the base of the hill offer a chance to wander through the garden on the way to the house or en route to one of the couples’ many outdoor gatherings. Rather than concrete, the pads are a mix of local stone and grass, a water-permeable means of accommodating cars while maintaining a more earth-friendly setting.

Nearby, colorfully lush flowerbeds sporting a mix of annuals and perennials are planted with butterflies and bees in mind. “Butterfly-friendly plants were a priority,” says Jim, “as we’re big fans of watching the bees and butterflies at work.” Lantana, salvia and more draw insect crowds, flying between the plants and around the sculptures worked into the beds.

A final garden destination on the edge of the property serves as a tranquil respite and meditation spot, complete with a sculpture by acclaimed artist and former Arkansas resident Pat Musick. Large boulders covered in lichen and moss surround the sculpture and create a more forest-like setting. “It’s our secret garden,” says Jim. “I came out here just the other morning, very early, and thought once again that I couldn’t find a place anywhere in the world that would be more beautiful or serene,” he adds, a testament to the power of staying put.