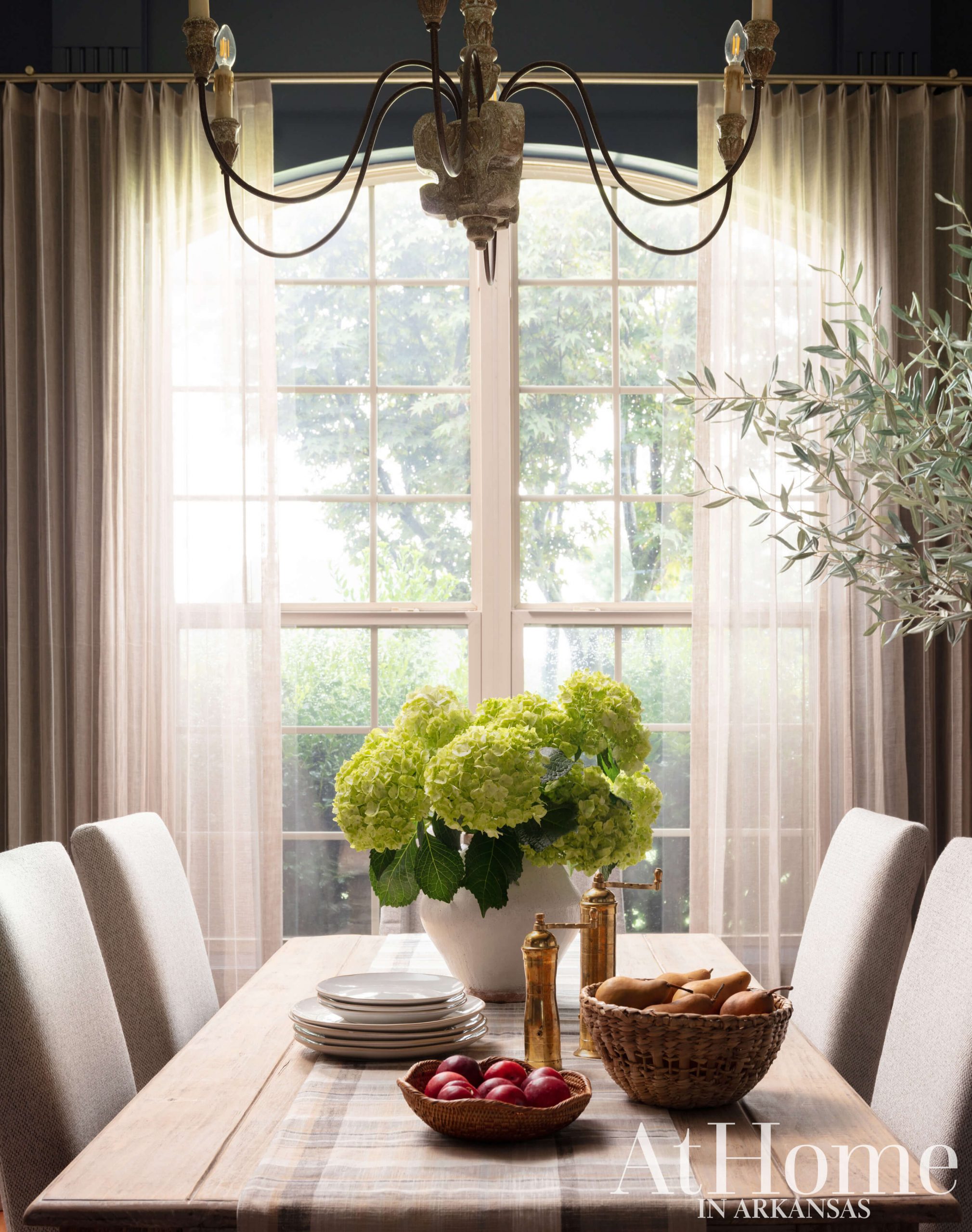 With three teenage boys at home, Jo Ann Greenfield admits food is a big deal in the Bentonville home she and her husband, Rodney, share. As much as their sons, Carter Wayne, Peter, and Sawyer, look forward to meals, the family also appreciates the time together, as they know what it’s like living apart.

In 2019, their youngest son, Sawyer, was diagnosed with T-cell acute lymphocytic leukemia. While he is now in remission, Sawyer and Jo Ann spent five months living in Houston while he received a bone marrow transplant. “When we were in Texas, I would dream about being at home with our family gathered around the table,” Jo Ann says.

When they returned home for good, the couple decided to update their dining room to create a space they loved. “It was so nice to look forward to something other than doctors’ appointments,” Jo Ann says. The Greenfields turned to friend and designer Corey Powell to begin this transformation. “I knew Corey had followed our story and that she understood what we had been through,” Jo Ann says. “We wanted this to be a place to celebrate healing.” 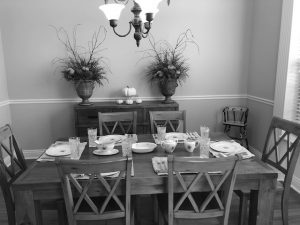 For Corey, the directive was a natural fit. “I always say homes are gifts, and we want to use them well,” says the designer, who learned the trade from years spent helping her parents, Dana and Tom Tull, at their former Little Rock storefront, Hoity Toity. “My dad is also an artist, so I grew up in the furniture, art, and design world,” Corey says. After a career in teaching, remodeling her own family’s home sparked a renewed interest in interiors, and she launched her Northwest Arkansas design business soon after.

Tasked with creating a cozy space reflective of the couple’s style, Corey took cues from a hue in the nearby living room. “I’m drawn to a Southern blue-and-white look,” Jo Ann says, noting that she likes numerous collectibles while her husband’s taste is more streamlined. The couple looked to Corey to balance the two styles. “I host Thanksgiving every year, and while I do use china to serve, we still want it to feel comfortable,” Jo Ann adds. Corey traded beige for a rich navy on the walls to create depth and visual interest. Slipcovered host chairs and upholstered side chairs surround the table to encourage long meals as well as conversation, while brass accents add polish to the room. “It was a full-circle moment of healing to have this makeover complete,” Jo Ann says. 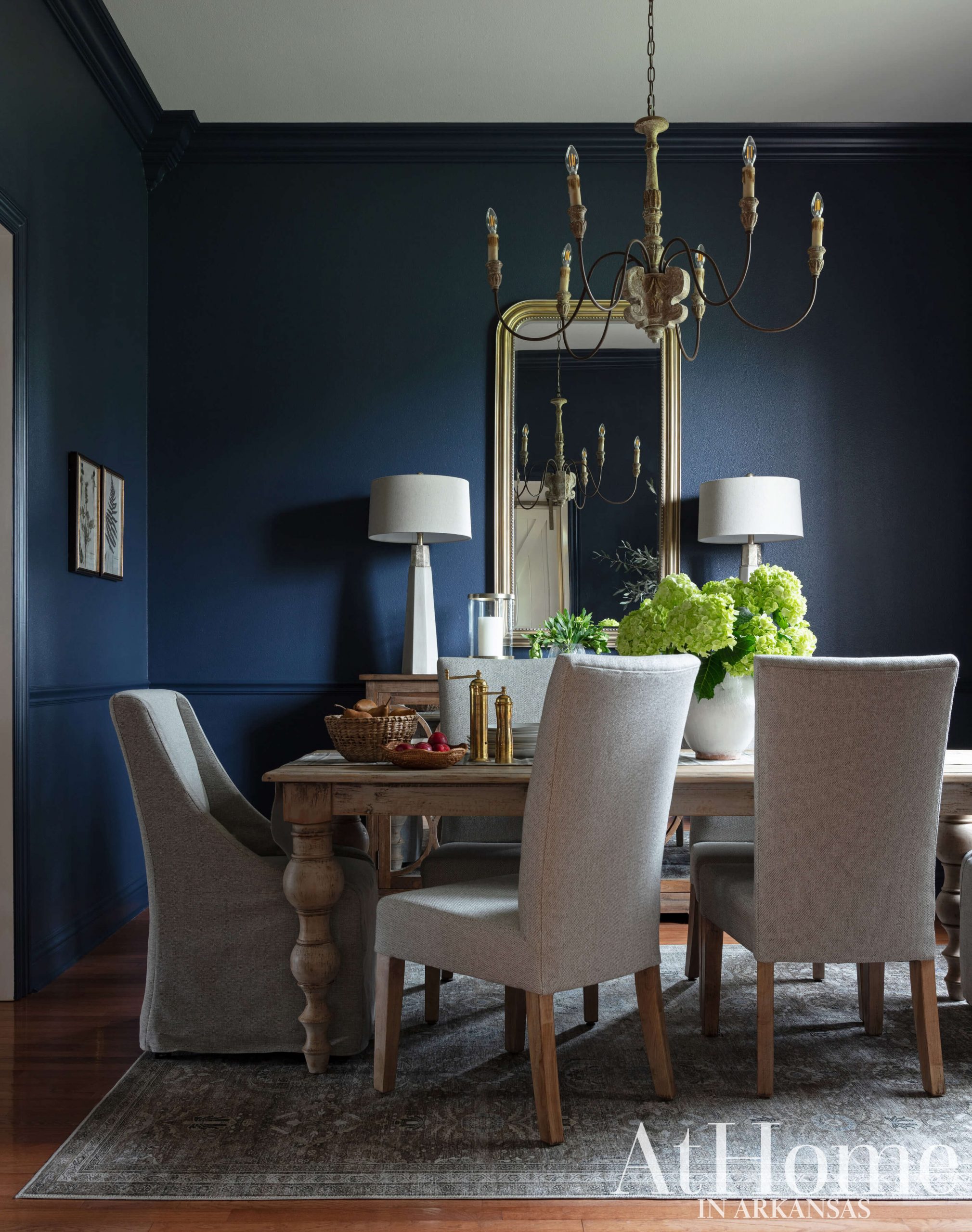 “I wanted a room that was bold, but also a place where you feel comfortable.” 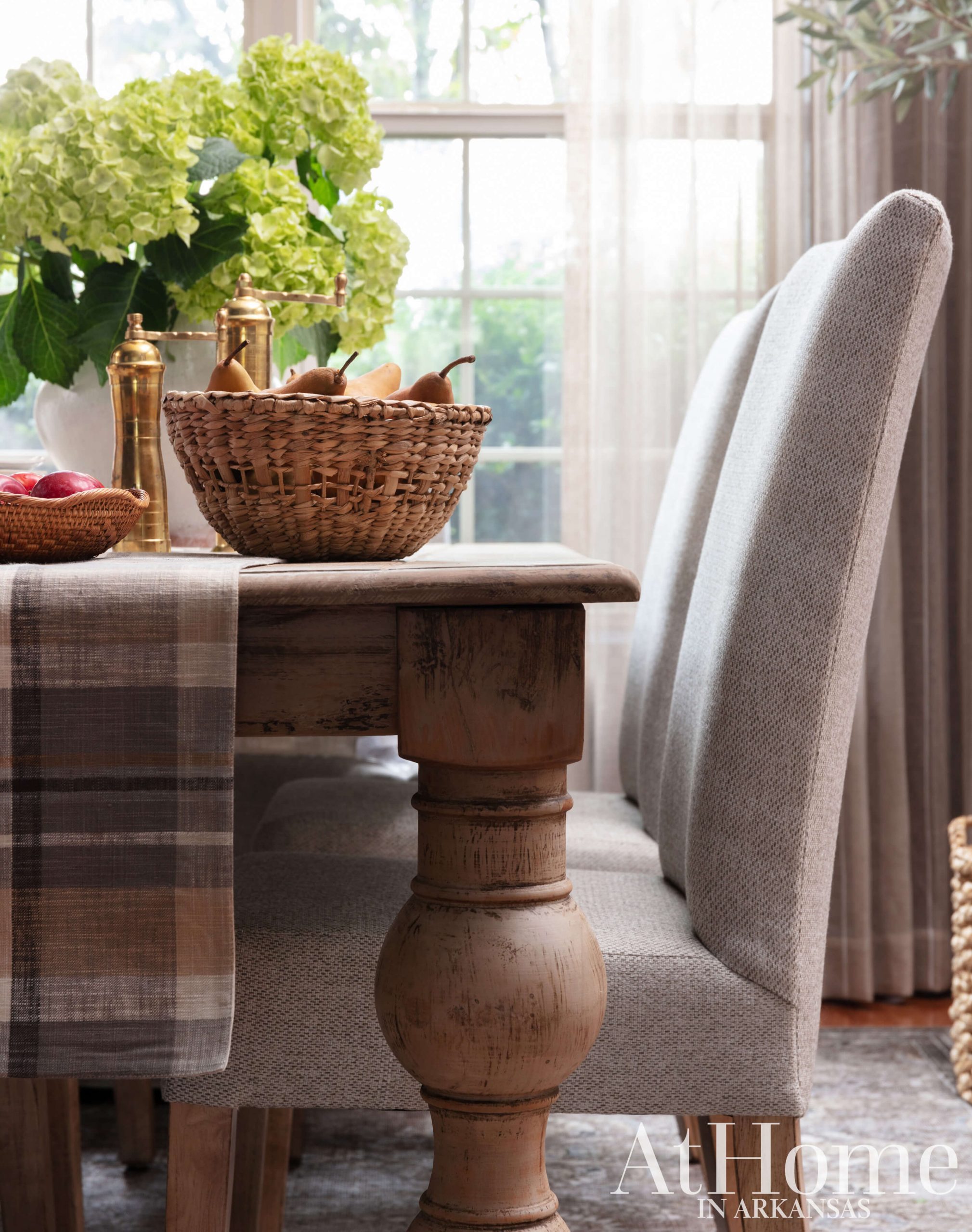 Practical Pair
To accommodate the family and guests, Corey chose a traditional turned-leg table with a weathered finish. Comfortable chairs invite guests to linger after meals are finished.

Shining Example
With distressed accents of antique brass and oil-rubbed bronze as well as candelabra-style bulbs, the chandelier sets a traditional tone for the space. 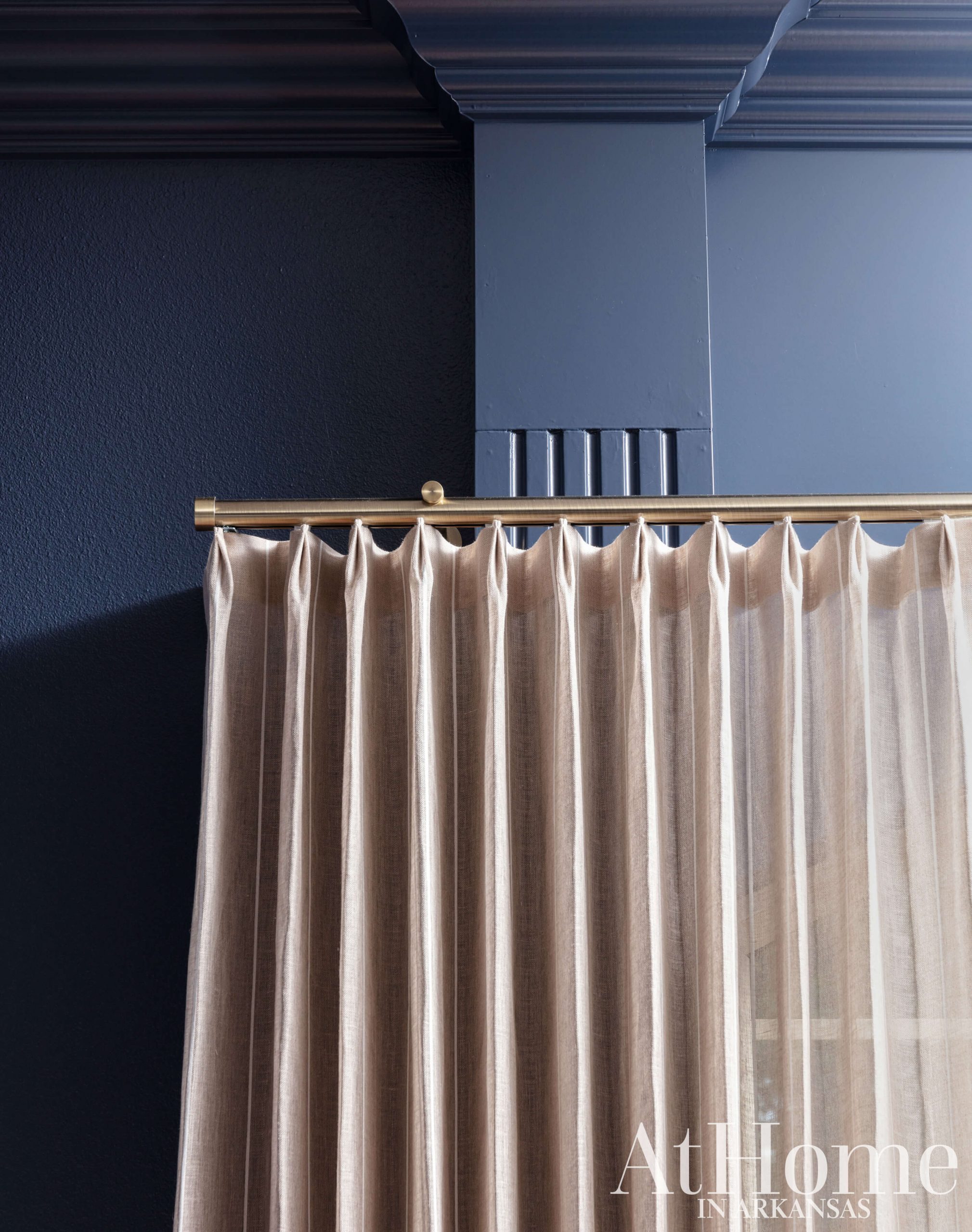 Light Addition
Custom, sheer curtains from Bentonville’s M Grace at Home contrast with the dark navy walls and allow light to flow into the room.
A subtle plaid stripe runs through the fabric, tying it to the runner on the table. 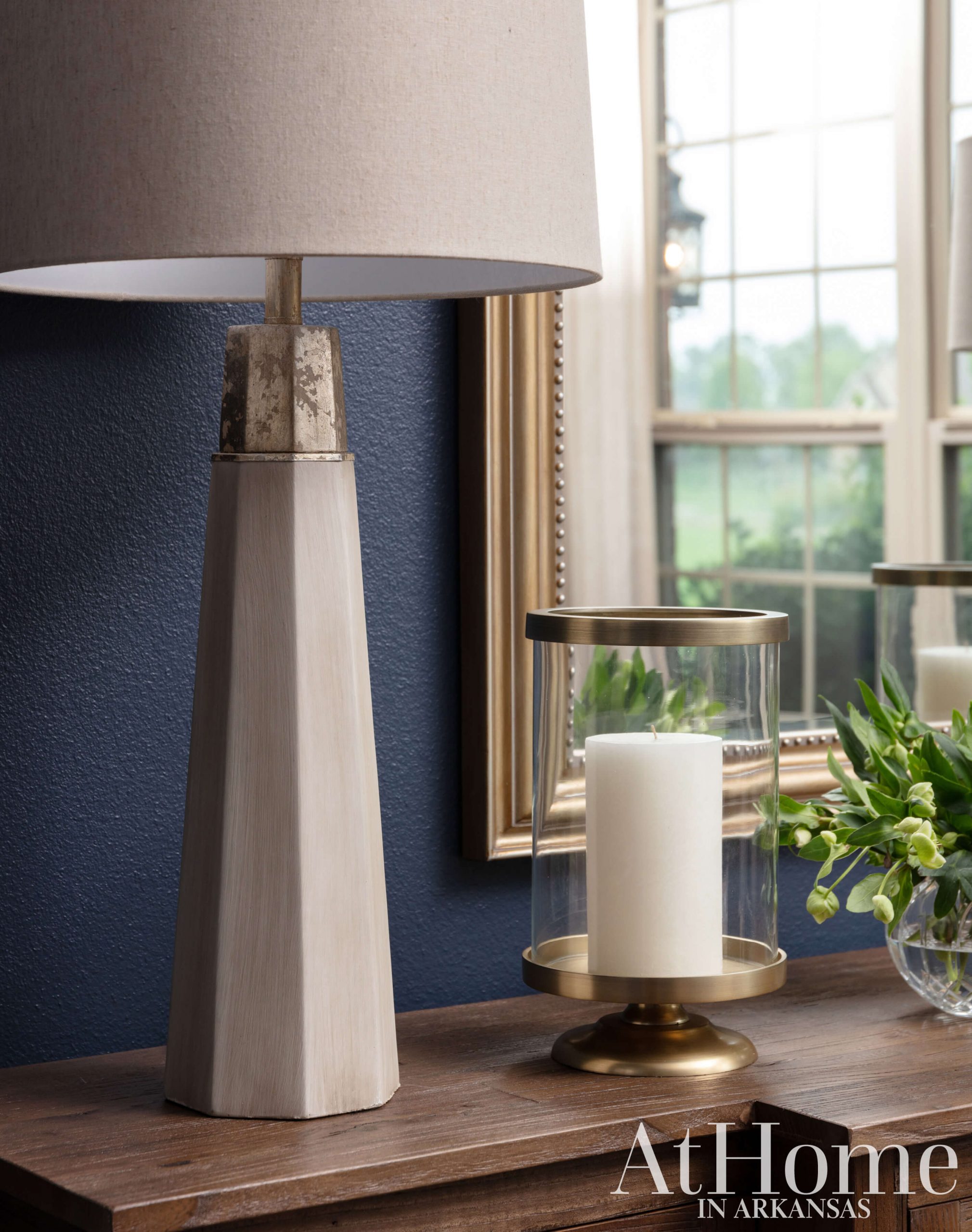 Glowing Accents
The sideboard holds a mix of accessories that are united by their brass and gold finishes. The pair of stone-base lamps have a gold leaf band that plays off the mirror and hurricane candleholders.