The Bee’s Knees: There’s something sweet about the story behind Brothers Honey Co. in Conway 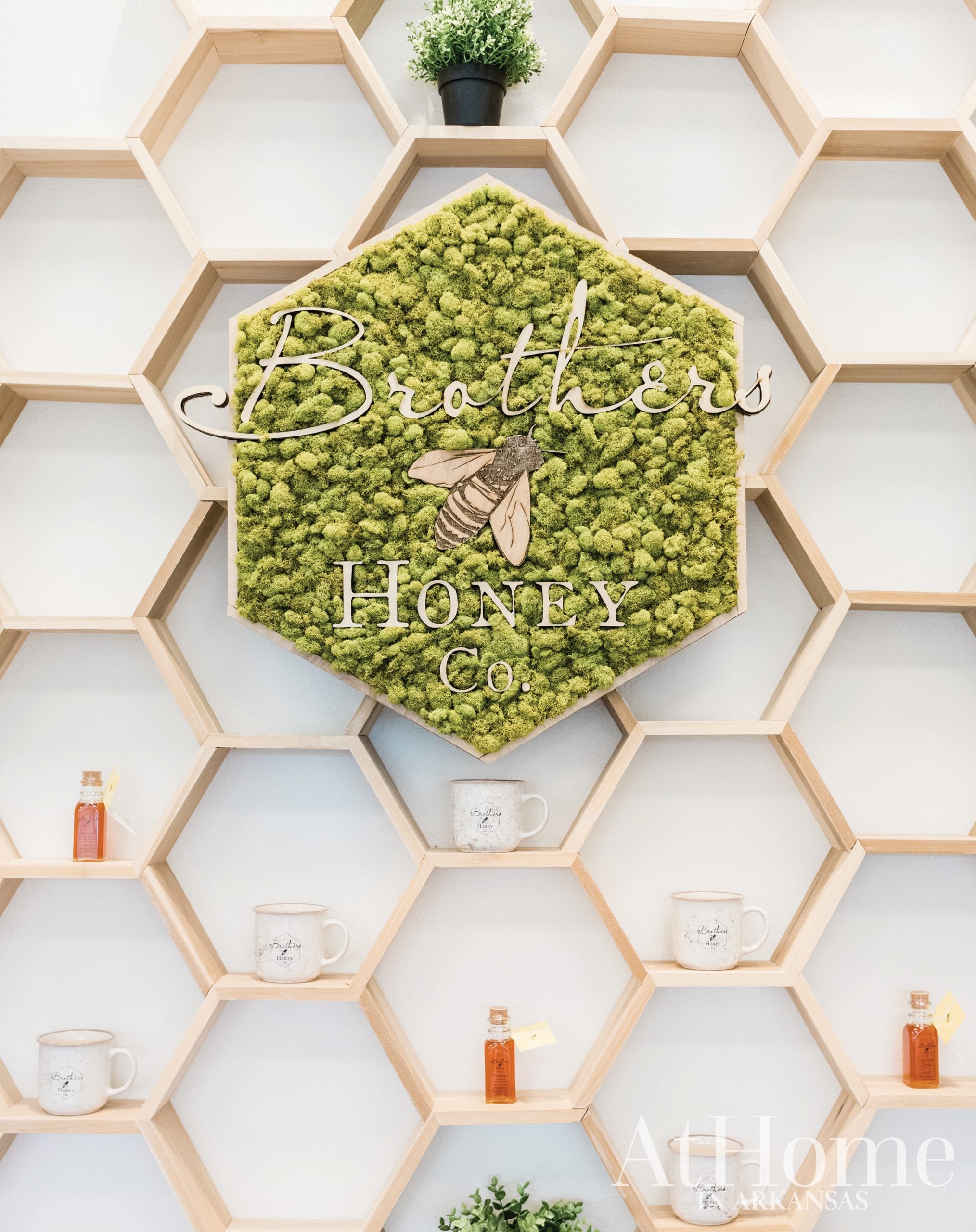 Hard work, lots of fun, and very sticky: That’s how Katie Opriş describes her first experience harvesting honey in 2016. When she and her husband, Elvis, started beekeeping a year prior, they were already using honey in their food prep and well aware of its health benefits. Elvis had watched his father keep bees when he was growing up in Romania, and some of his brothers—he is one of six boys now spread over four countries in three continents—had taken an interest, too. When one of them came to visit in 2015, he got Elvis and Katie started with their first hive. “As far as the bees go, they’re just fascinating,” Elvis says. “Watching them, learning about their behavior—they draw you in and become addictive.”

After that first year, the couple decided to rent a commercial space for their next harvest, and the operation now known as Brothers Honey Co. snowballed from there. “We started selling our honey locally, just to friends and in a coffee shop. But there was no way we could have kept harvesting out of our house at the time,” Katie says. They found a storefront in Conway and soon realized the spot could be so much more. “The more we looked into that, we thought, Why utilize this space for just a harvest, when we could probably have a store? Well, actually that part was more Katie,” Elvis says with a laugh. 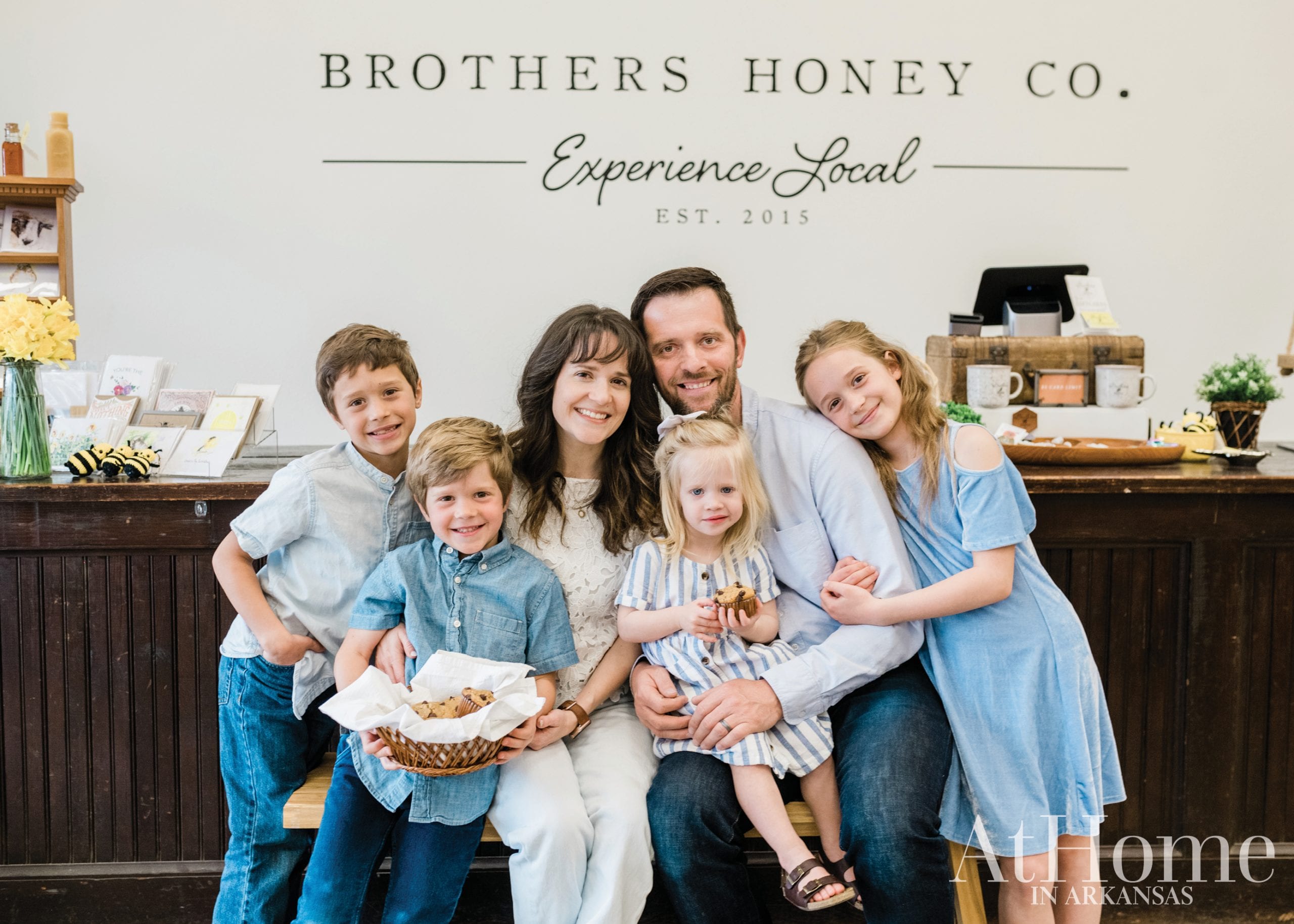 Katie and Elvis with their four little helpers (from left): Elias, Arlon, Eden, and Adrielle.

Katie had a vision of a local hub for all things bees and honey. In addition to selling their own packaged products, they now offer goods from other local makers, honey on tap, beekeeping equipment, and even beekeeping classes. “From the beginning, we wanted to be an inclusive place both for the community and for beekeepers,” she says. “We also branded it in a way that feels a little boutique-ish; something people from Arkansas can be proud of.”

There’s a lot that goes on behind the scenes, from mitigating potential pests to bottling the finished product, and it’s a wonder Brothers Honey Co. isn’t a full-time job for either owner. Elvis is a nurse, and Katie has been a family and wedding photographer for 14 years; plus, the two have four children who are growing up with a serious appreciation for apiculture. “The kids love to help out. The big ones have bee suits, and they take turns going to assist Elvis at the hives,” Katie says.
And at home, there’s also honey—lots of honey. Anywhere other people might use sugar, the Oprişes use honey, and they encourage you to do the same. “Raw honey is unfiltered and hasn’t gone through the pasteurization process like most store-bought honeys. Heating it up to that temperature keeps it liquid longer, but it also destroys the beneficial enzymes and antioxidants that are naturally there, and those are what differentiates it from another type of sugar source,” Katie says.

To get more honey in your diet, she recommends mixing it into homemade salad dressings or drizzling it on grapefruit, ice cream, and even waffles. Read on for Elvis and Katie’s recipe for Golden Oat Honey Muffins. 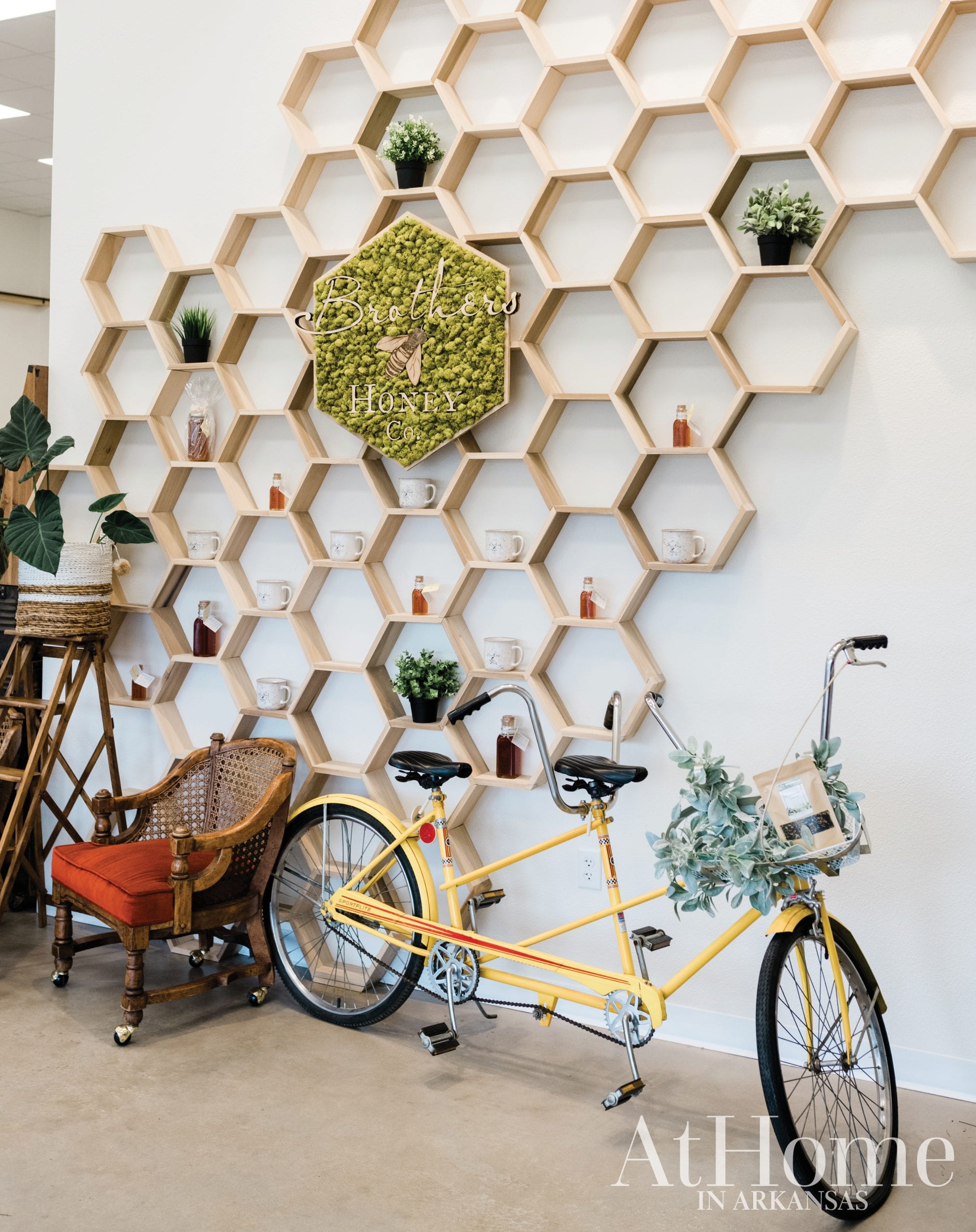 In 2020, a neighboring storefront became available and Brothers Honey Co. was able to expand, doubling its size. Friends helped them build the floor-to-ceiling wooden honeycomb installation. 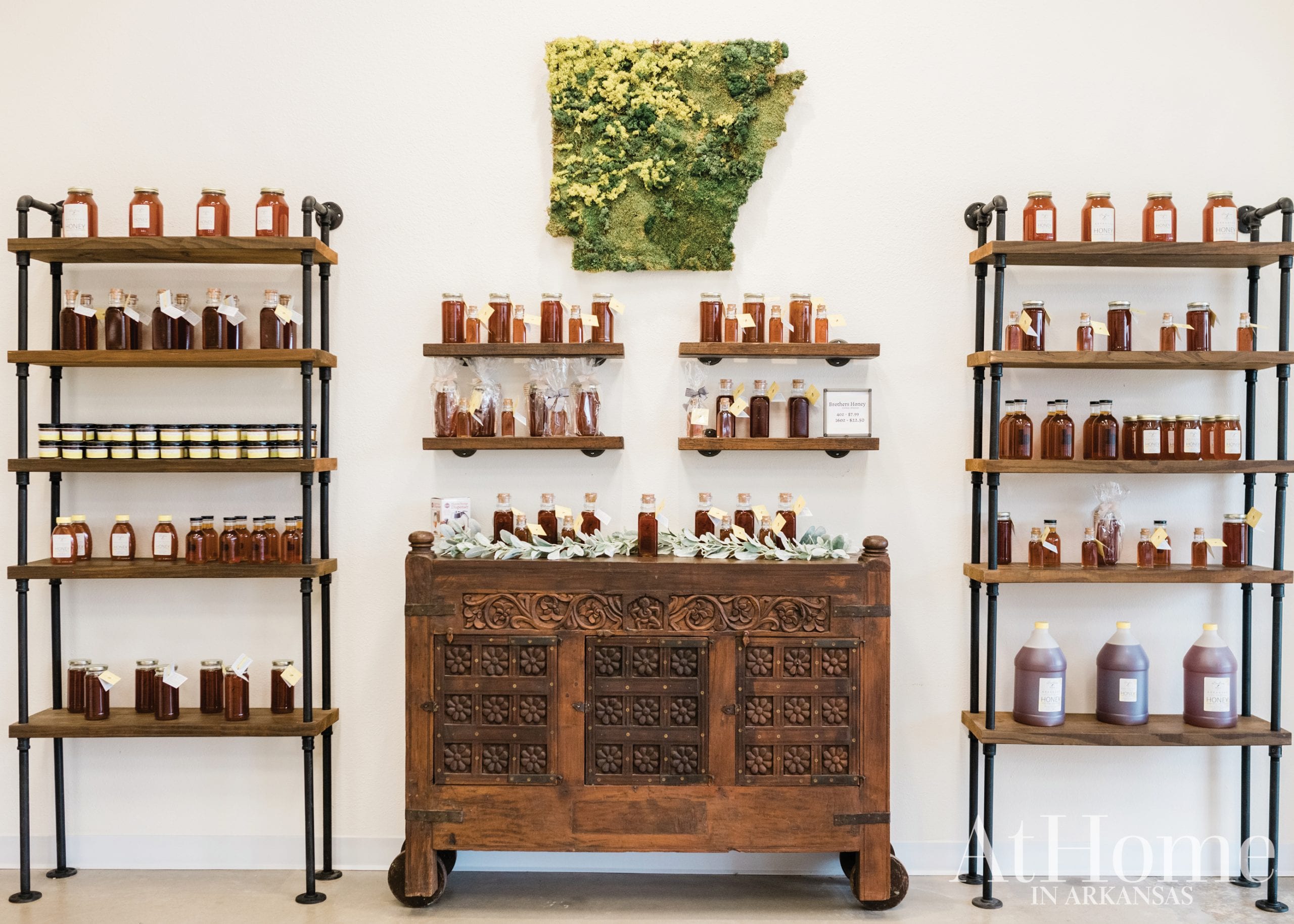 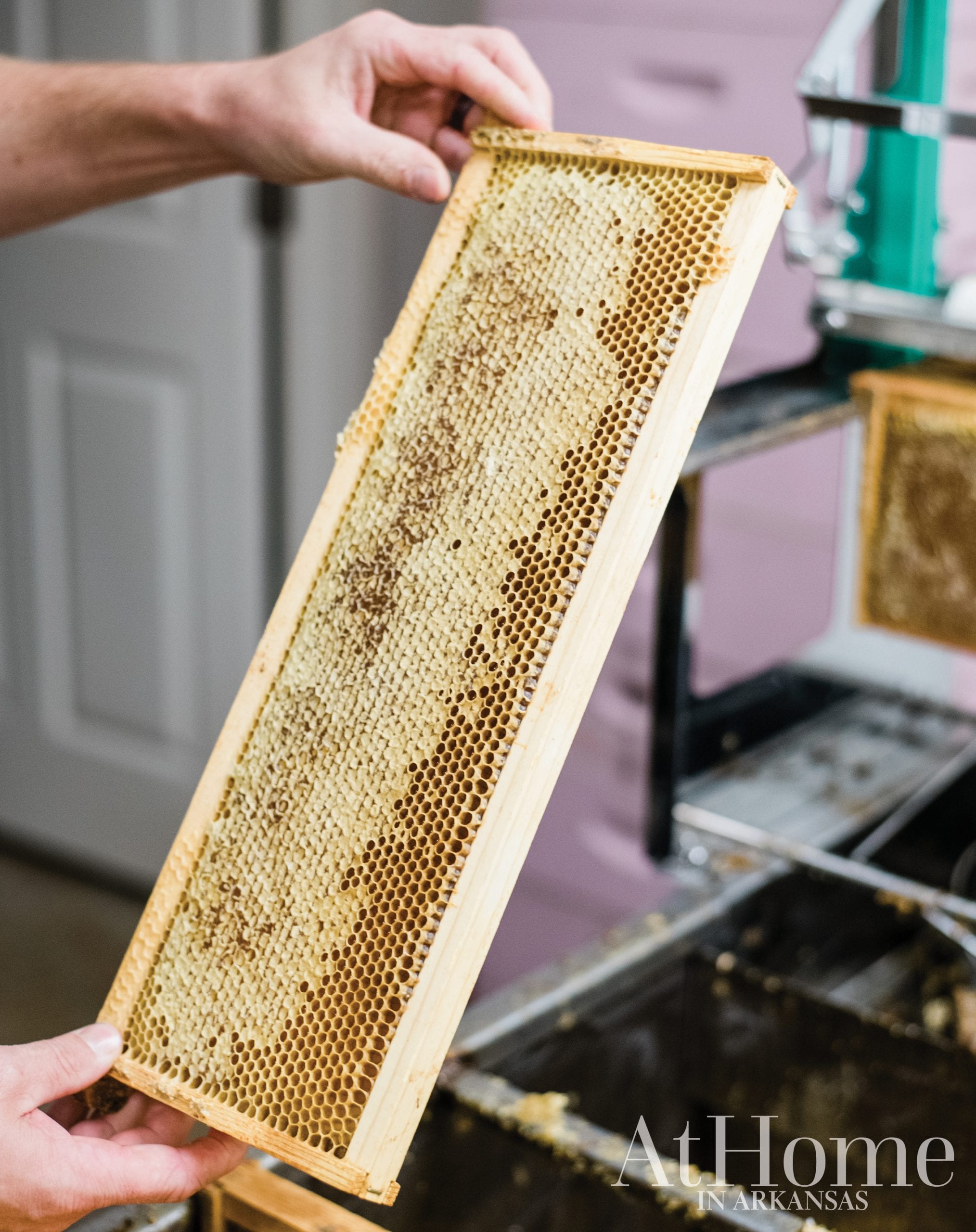 Elvis prepares to “uncap” (remove the top layer of wax from) a frame of honey during a harvest. Uncapping only the top layer is less invasive for the bees, allowing them to refill the cells for winter honey stores. 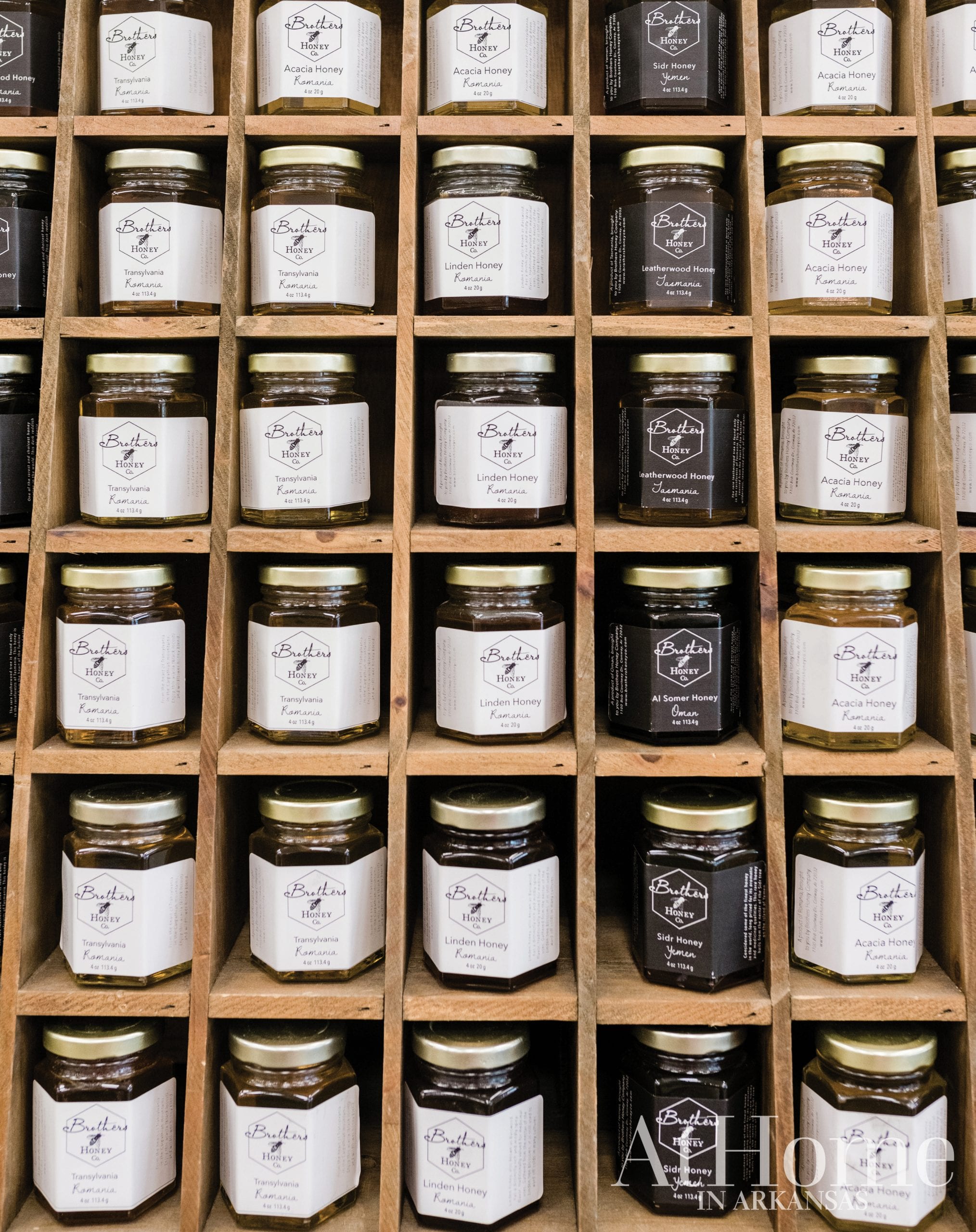 This Conway store also sources honey from different parts of the world, including Tasmania,
the Middle East, and Elvis’s native Romania. 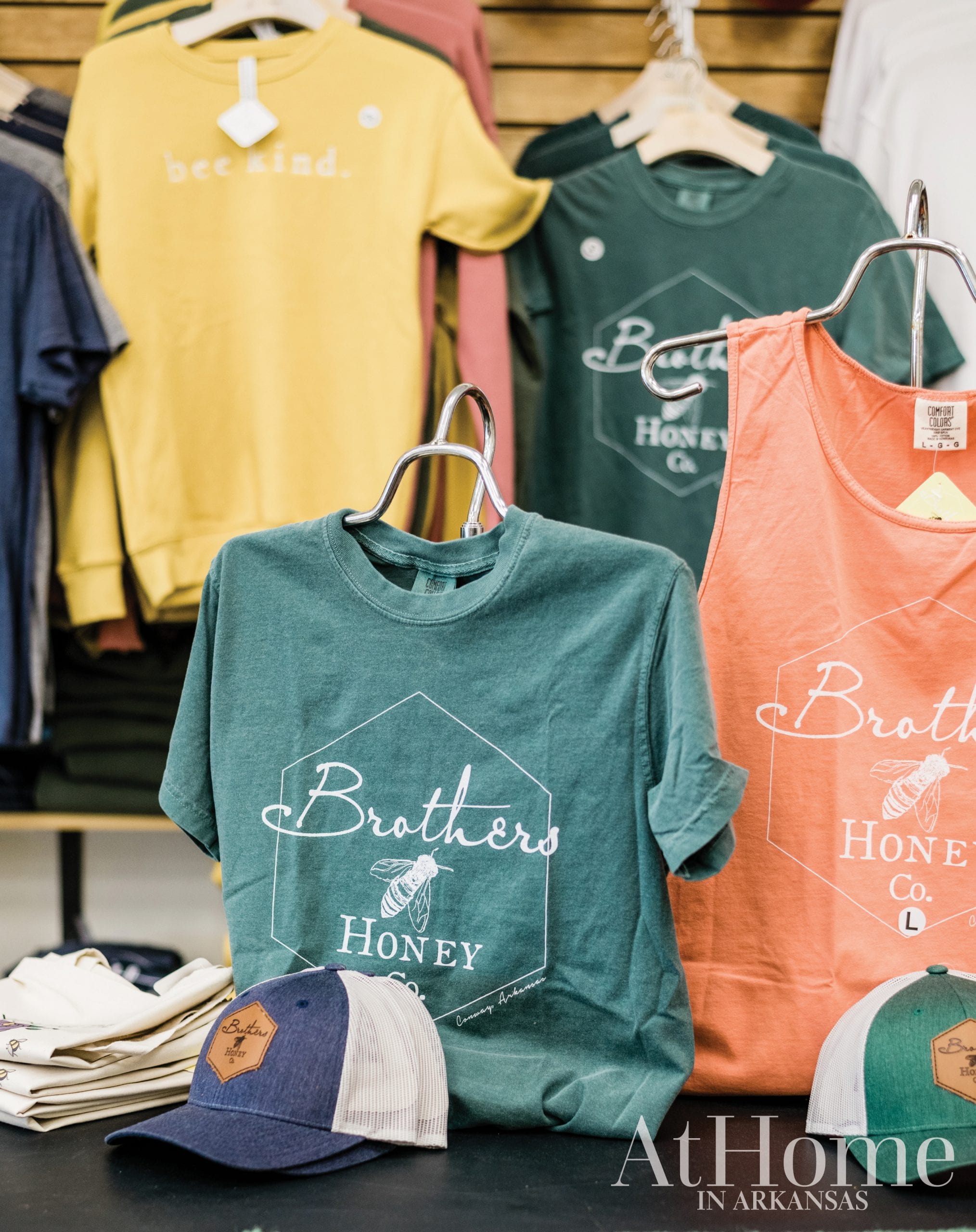 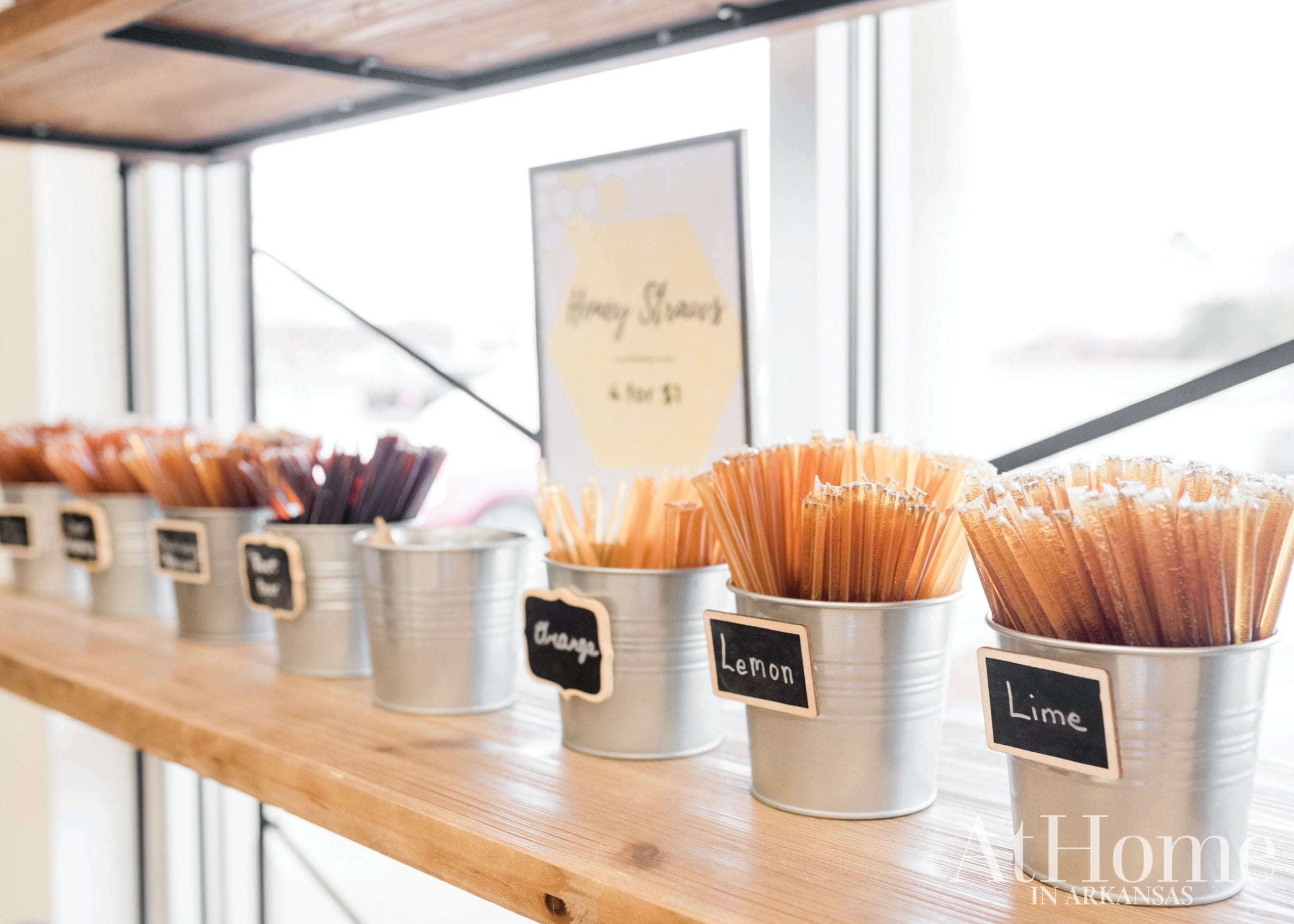 In addition to pure bottled honey, you’ll find a range of honey-based goodies in store, including honey sticks, marshmallows, and taffy. A dozen flavors of creamed honey are available for taste test, some in rotation seasonally. 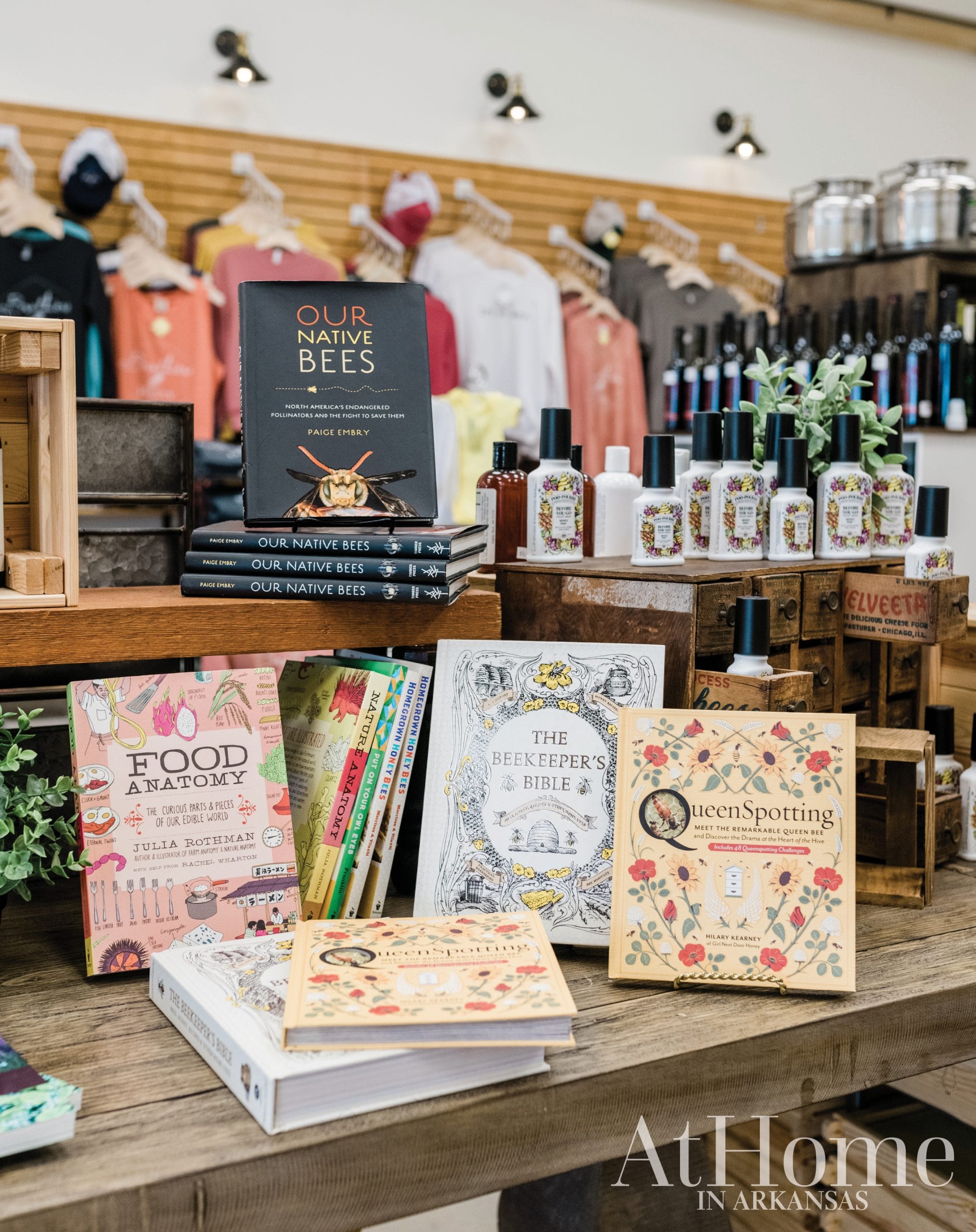 Help the Bees >> Wondering how you can help your local bee population? Visit athomearkansas.com/blog for Brothers Honey Co.’s tips on creating a hive-friendly environment around your home. 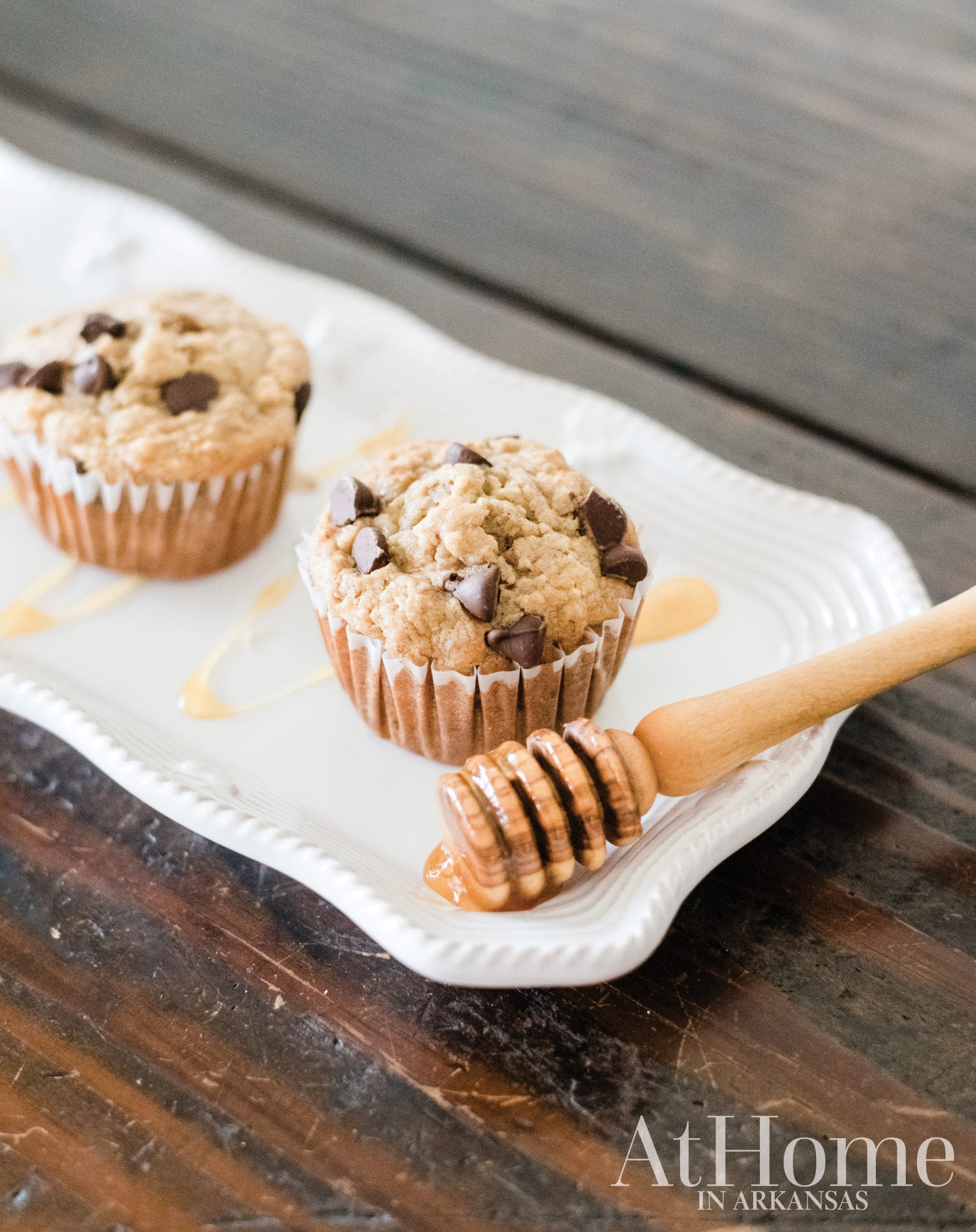 PREPARE
Preheat oven to 425ºF. Combine oats and Greek yogurt in a medium bowl. In a large bowl, whisk together egg, honey, and brown sugar (if desired) until smooth. Add butter and vanilla, and whisk to combine. Next, add oat-yogurt mixture, whole wheat flour, baking soda, salt, and cinnamon to the egg mixture. Stir until well combined, being careful not to over mix. Fold in mashed bananas, chocolate chips, and walnuts (if desired). Let batter rest in the refrigerator, covered, for at least 1 hour (and up to overnight). Line muffin tin with liners and spray with cooking spray. Distribute the batter between the compartments, filling to the top of the muffin liners. Bake 6-9 minutes, or until muffin tops have risen ¼- to ½-inch above the liner. Do not open oven door. Reduce heat to 350ºF and bake for 6-10 more minutes, or until golden brown and an inserted toothpick comes out clean. Enjoy with butter and a drizzle of raw honey.

To learn more about Brothers Honey Co., see behind the scenes of a honey harvest, and find out about upcoming events and seasonal products, follow @brothershoneyco on Instagram.