‘Tis the season for apples, pears, pecans and—oh, yes—pie. In Northwest Arkansas, a Los Angeles-born baker shows us how she’s creating a sweet life with plenty of pastries to please 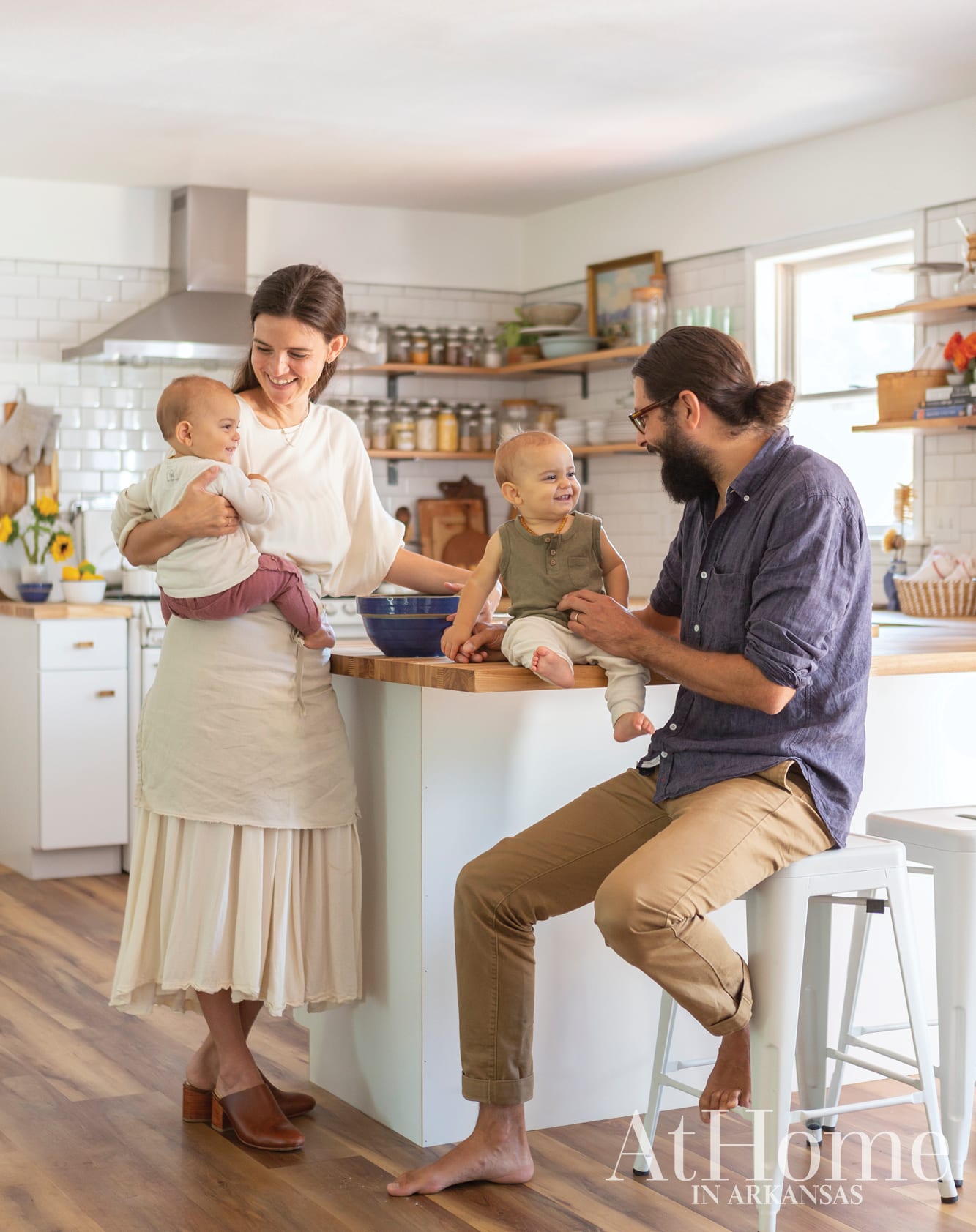 “Pie is my favorite thing to make,” Emily Petrick says. “I bring it to dinner parties instead of flowers, and it’s how I say thank you for everything.” With a passion like this, it’s no surprise the Bentonville baker and mom of twins admits to cooking a pie a week.

The fourth generation Los Angeles native worked as a food stylist and baker before moving halfway across the country to Northwest Arkansas with her husband, Corey, when he was presented with an opportunity to teach at Bentonville’s Thaden School. And, in her words, the timing couldn’t have been better. “We knew we were expecting, but on the same day Corey was offered the job here in Arkansas, we found out we were having twins. If that’s not a sign, I don’t know what is,” Emily says. The two sought to raise their children, Arlo and Jasper (born just five months after the move), somewhere with a “gentler pace.” “I had initially thought, not Arkansas, but we got on a plane and came to see it, and I fell in love. There’s so much going on here—the art, the food, the trails—it’s amazing,” Emily says.

While life has been pretty busy since she (and the twins) arrived in The Natural State, she hasn’t let her passion for baking fall by the wayside. Corey, who is also a woodworker, customized much of the couple’s kitchen and created space for one of Emily’s most-prized possessions, a 1950s oven, which was a wedding present from her dad. “I love the way it looks, and these things are built like Cadillacs,” she says. “Plus it has two double ovens, which was huge for the catering business I had before we moved.”

As she settles into her new routine, she notes she hopes to continue her work in the food industry soon, whether as a stylist or a baker. Here, she shares the recipe for her fall fruit pie with a pecan crumble topping. “I make this every Thanksgiving. One year I didn’t make it and about three of my family members refused to talk to me,” she laughs. Something tells us, it must be good. 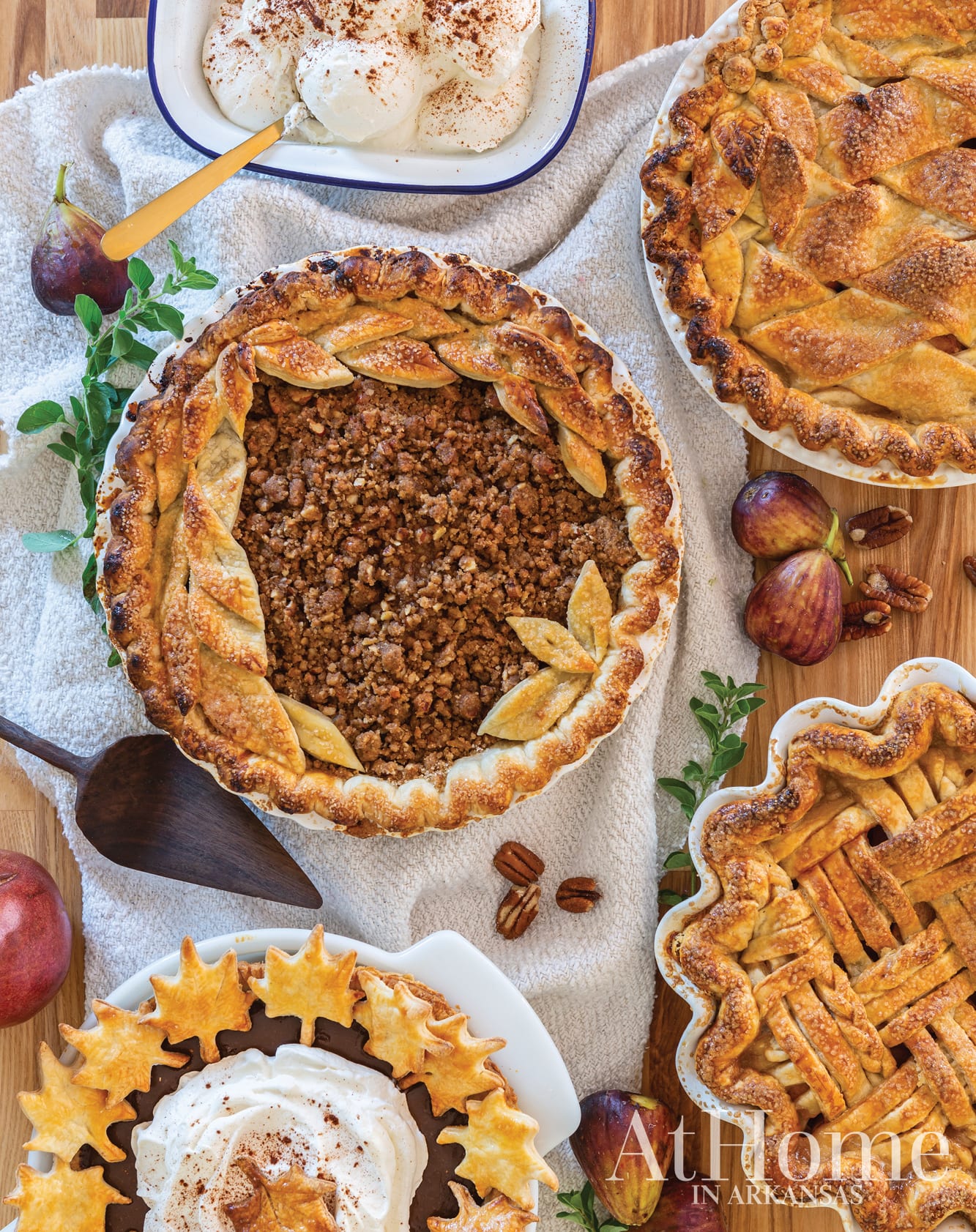 “I make this every Thanksgiving. One year I didn’t make it and about three of my family members refused to talk to me.” — Emily Petrick 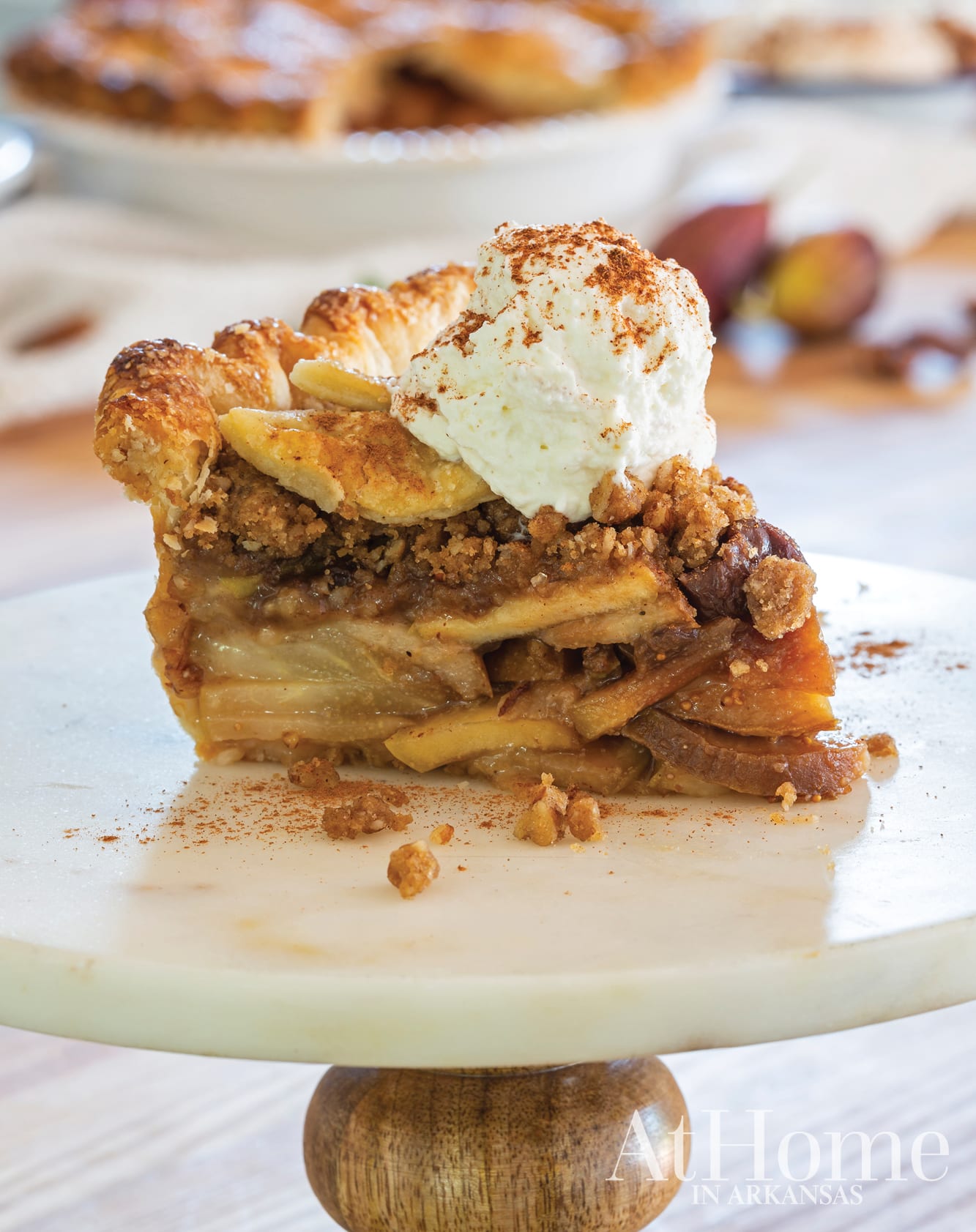 SHOP
In addition to the ingredients listed below, make sure you have sugar, flour, and 1 egg, plus whipped cream for serving 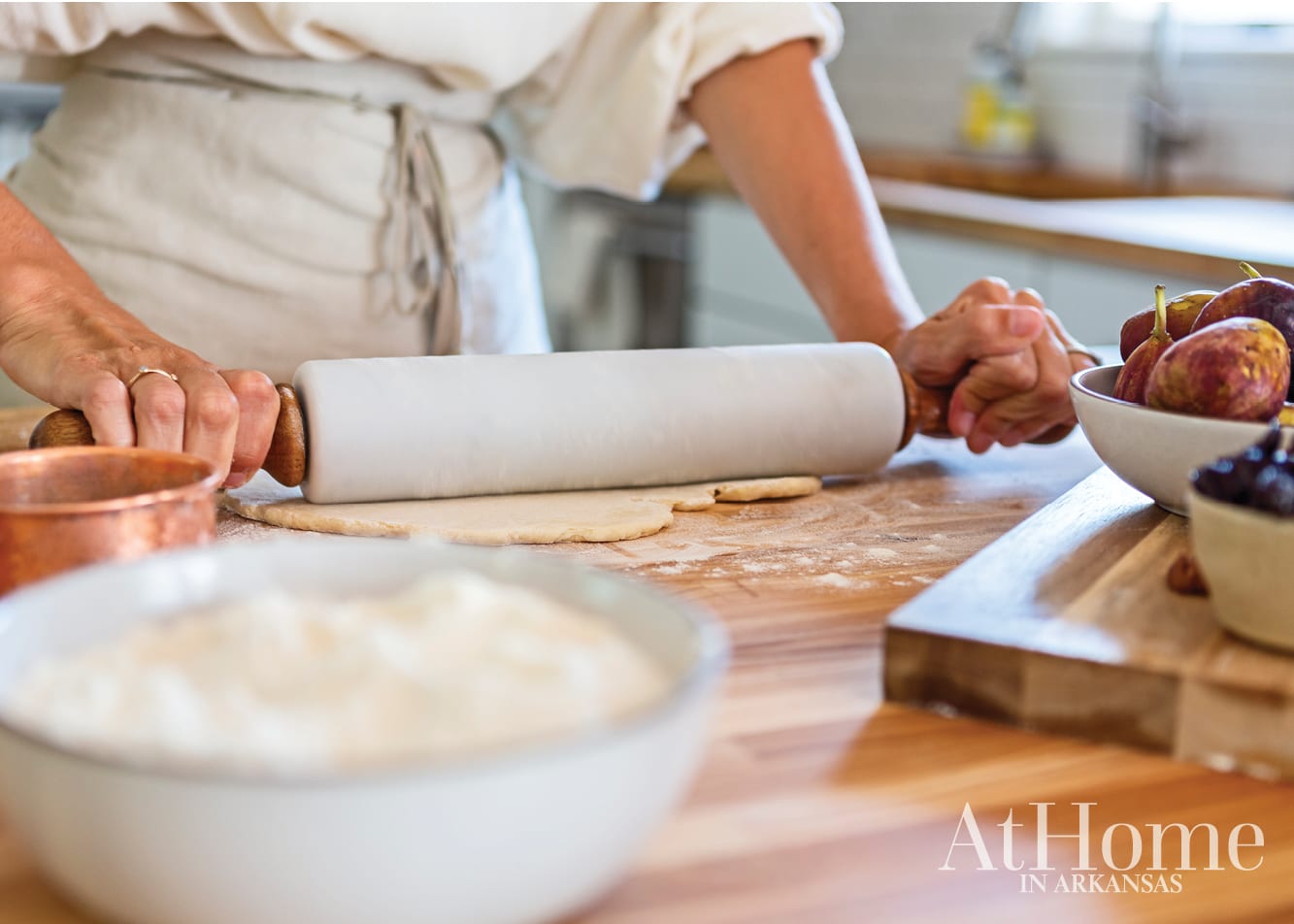 PREPARE
To make the crust, combine flour, sugar, and salt in a large bowl. Using a hand grater or box grater, grate butter into a medium bowl or onto a cutting board. Add butter to the bowl with dry ingredients and use your hands to gently toss until butter is evenly distributed and coated in flour.

Make a well in the center. Pour ice water and lemon juice into the well. Using a fork (or your hands), mix all ingredients until they are just starting to come together. The mixture will look shaggy. Transfer the dough mixture onto a floured surface. Press the dough together gently but firmly, folding it over onto itself. Keep pressing and folding until all the loose bits have been incorporated and it holds together as one piece. Divide the dough and shape it into two discs. Wrap the discs in plastic wrap and place them in the refrigerator for at least half an hour (or up to three days). 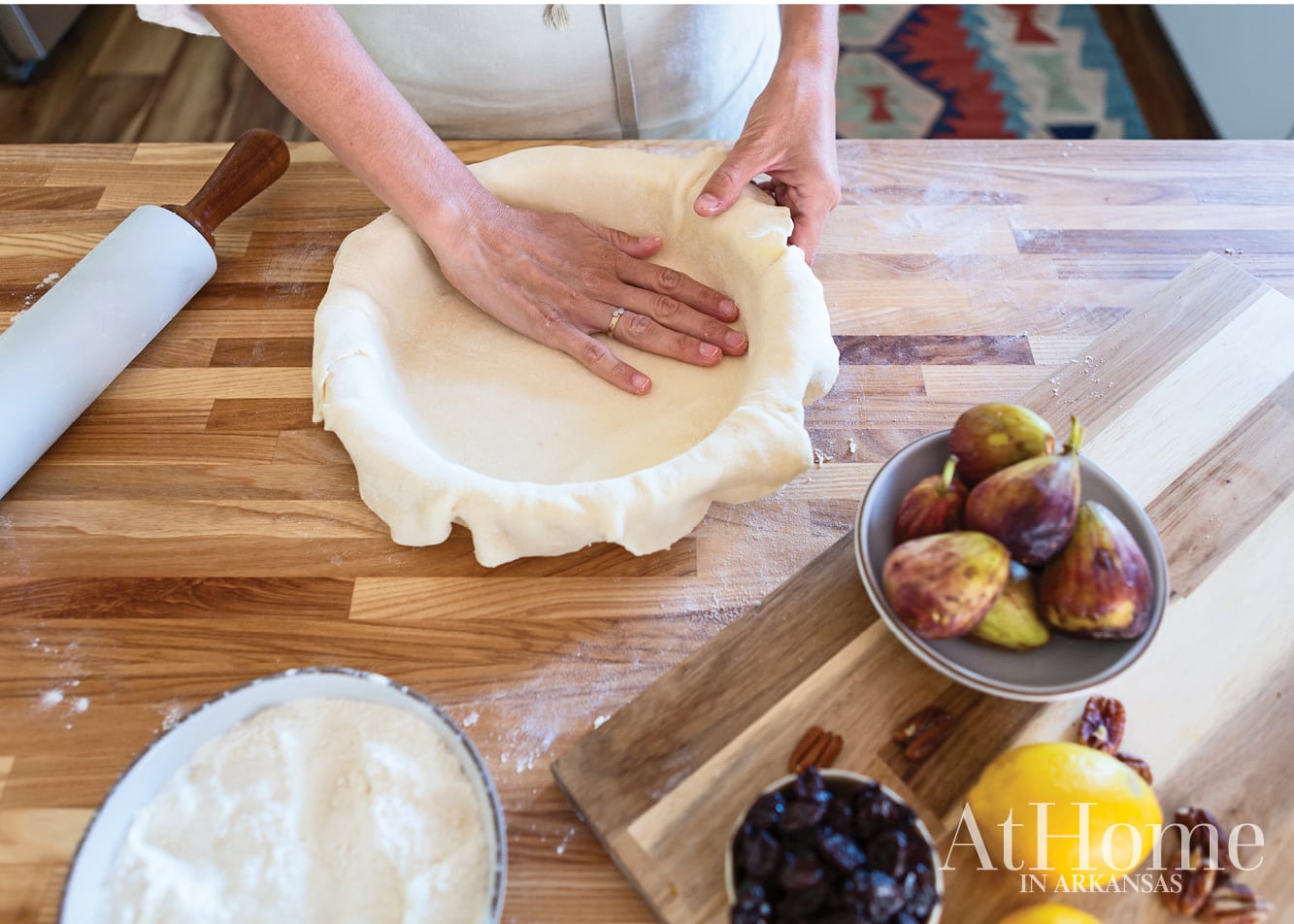 To assemble, cover your countertop with a generous amount of flour. Take one disc of dough and, on the floured surface, roll it out to be approximately ¼-inch thick. Brush the flour off and drape dough over the pie dish. Gently press the dough into the dish, paying attention to the corners. The dough should overhang about 1 inch all around. Fold the edges under and use your thumb and forefinger to crimp, or trim the edges to cover just the rim of the dish and use a fork to press a pattern into the edge.

Pour fruit filling into the pie shell, pressing it into a tight mound. Cover the mound of filling with chilled crumble topping. Place pie in the refrigerator or freezer to chill while you make designs for the top.

Optional: To create designs for the top of the pie, roll out the second dough disc to approximately ¼-inch thick on a floured surface. Cut out desired leaf, flower, geometric, or other shapes and arrange them on top of the crumble. If you choose to omit this step, the second dough disc can keep in the freezer for up to three months for future use.

Preheat the oven to 375°F. Brush the pie crust rim and cutouts with egg wash and sprinkle generously with sugar. Bake on the center rack for 75-95 minutes, until edges are brown and juices are bubbling. Allow to cool for at least 45 minutes before cutting. Add a dollop of cream for serving, if desired.

TAKE IT FROM EMILY >>
When working with pie dough, you want to make sure not to handle it too much, so you don’t melt the butter. You want to see the streaks of butter in the dough as you roll it out. If it starts feeling warm or mushy, put it back in the fridge for a few minutes. This will ensure a flaky crust.

Follow Emily on Instagram (@whiskandwhittle) for a glimpse into her world and what’s cooking in her kitchen.