At Home in Arkansas: Tell us the backstory on how this family of four from Little Rock created this retreat on Greers Ferry Lake.

Scott Paterek: They were originally drawn to the land, which has a dock and a beautiful view of the lake. They built a custom home on it, and then two years later the tornadoes that went through this part of the state destroyed it and they subsequently re-built.

AHIA: How damaging was the tornado?

SP: Just devastating. The tornado took dozens of trees, which really changed the landscape. A large portion of the house was destroyed; the dining table was found in the driveway. The recovery involved another year of building, which we recently completed.

AHIA: What was top of mind in terms of the redesign?

SP: We kept it the same—rustic contemporary but with the warmth of wood and the feel of a lake house. It was totally designed around their family, including their two teenagers. They spend holidays here, waterskiing and hanging out at the lake. The polished concrete floors are durable for when dirt gets tracked in. The living room furnishings are ideal for lounging and stretching out in front of the fireplace, but can be easily cleaned if you sit on them with wet bathing suits. 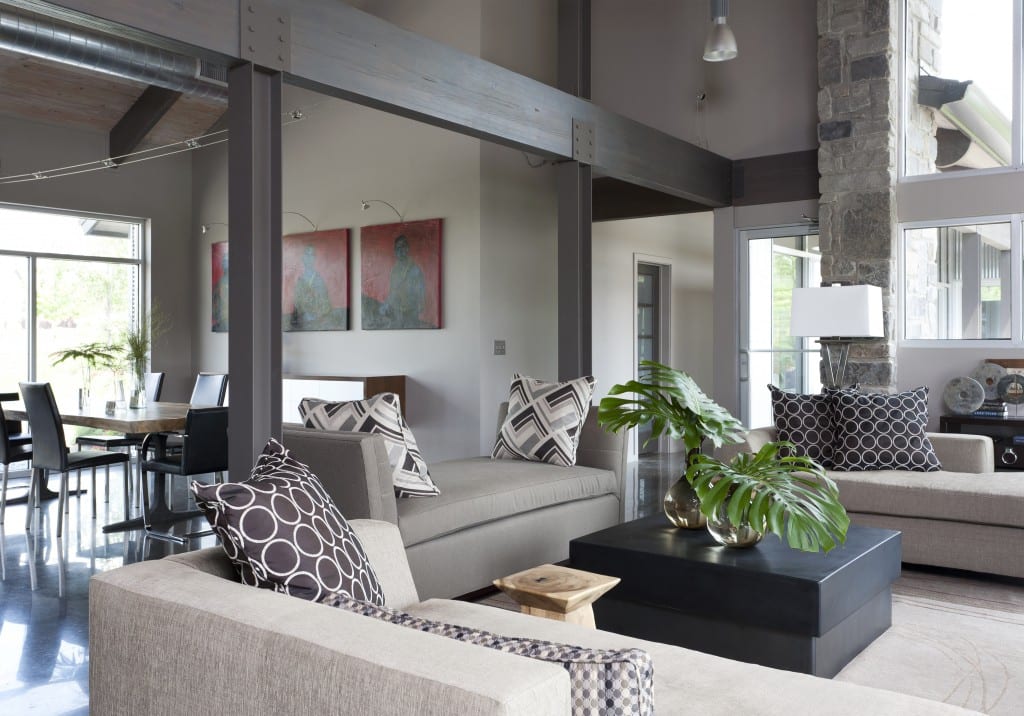 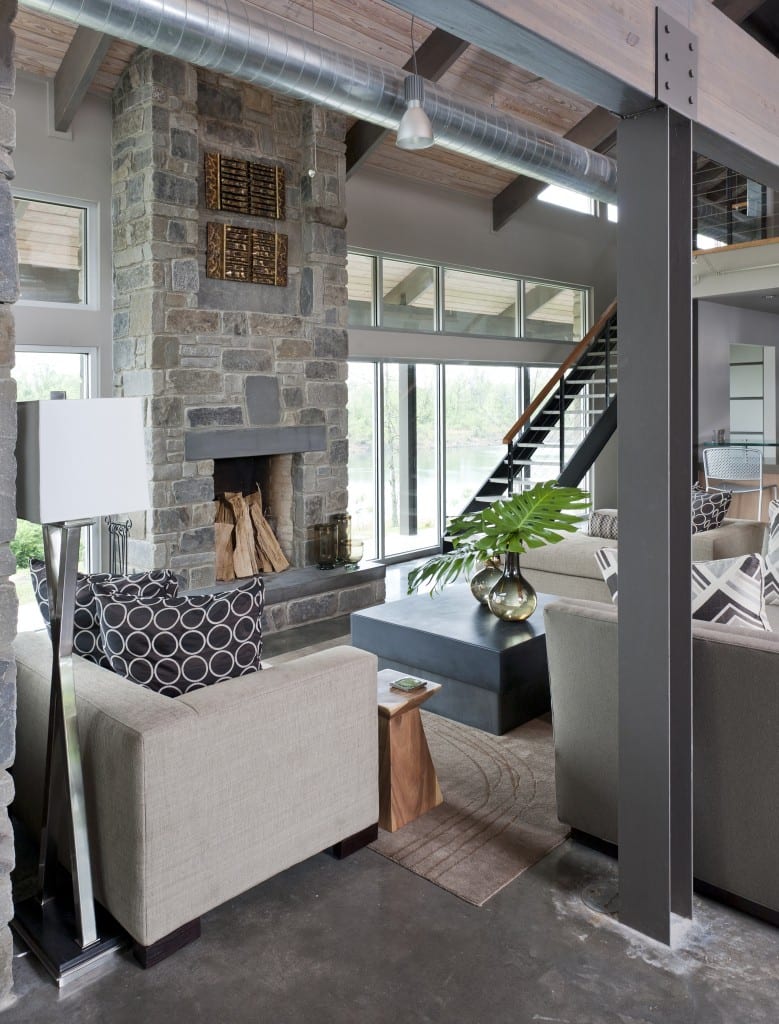 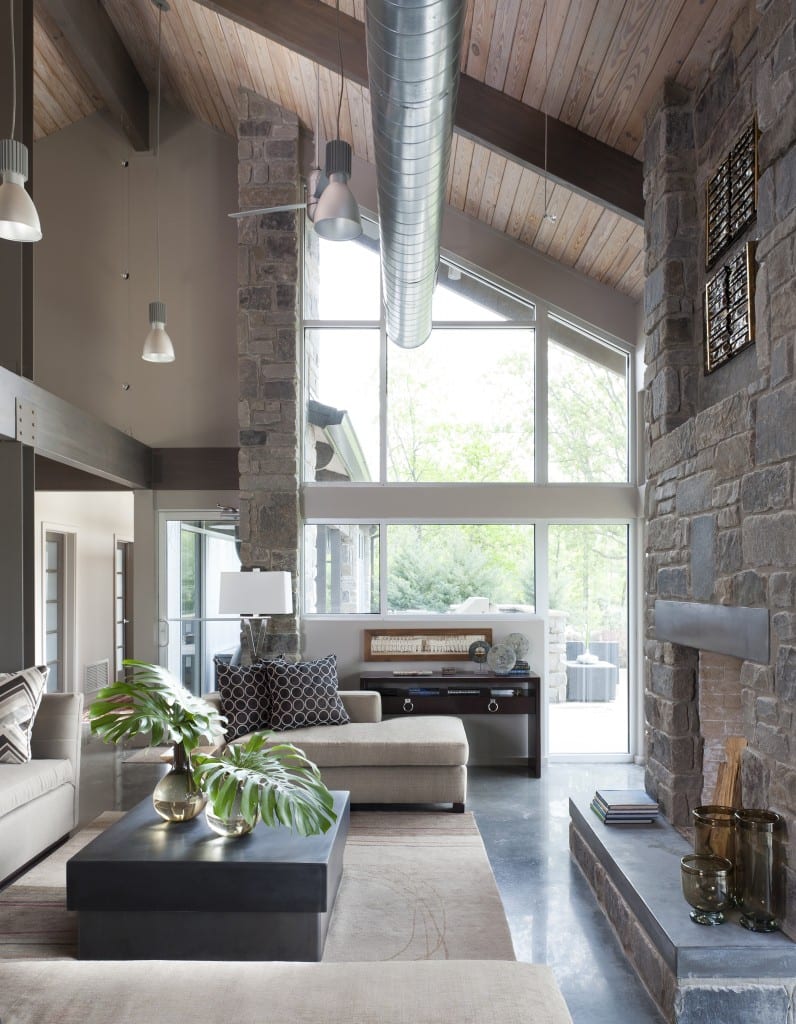 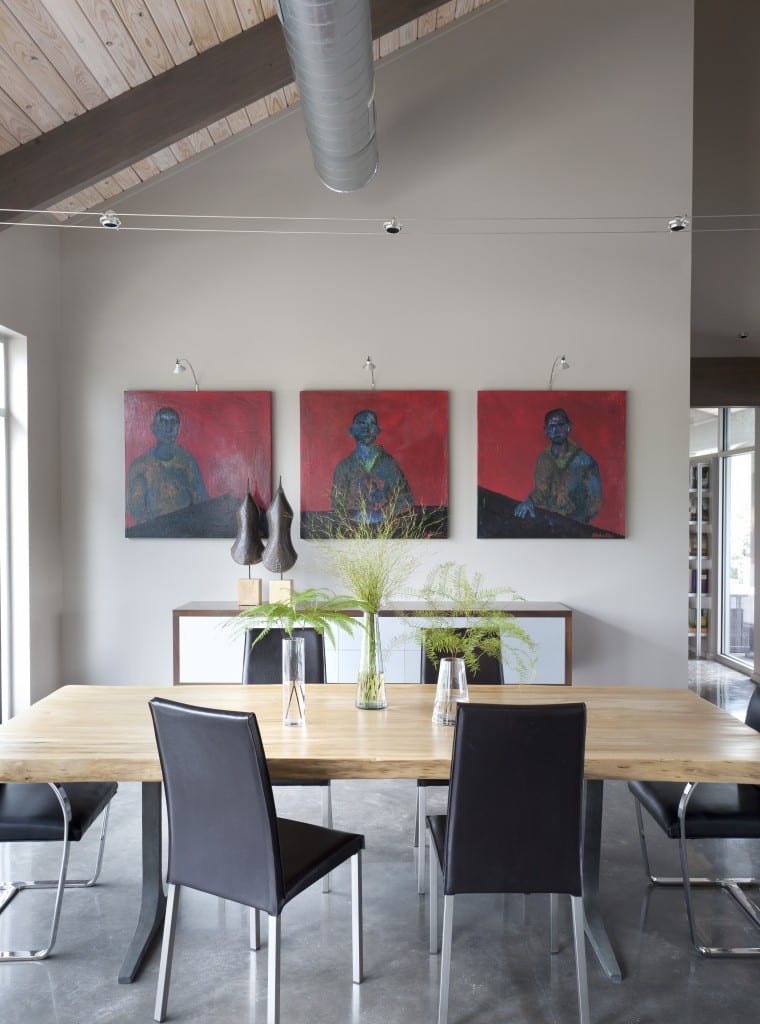 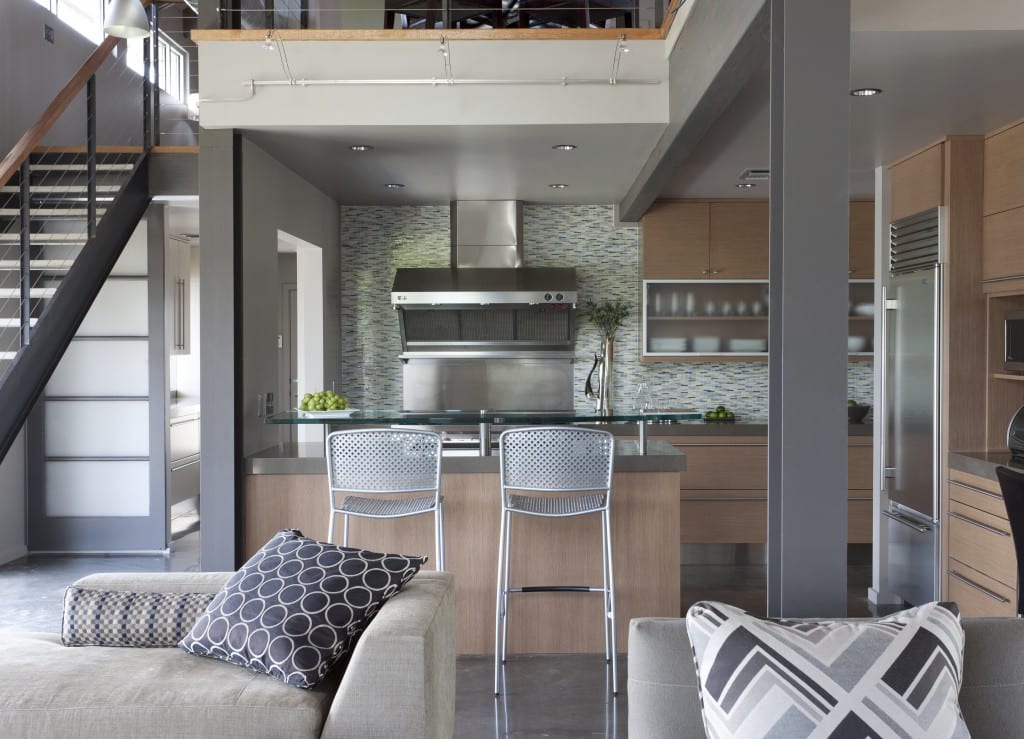 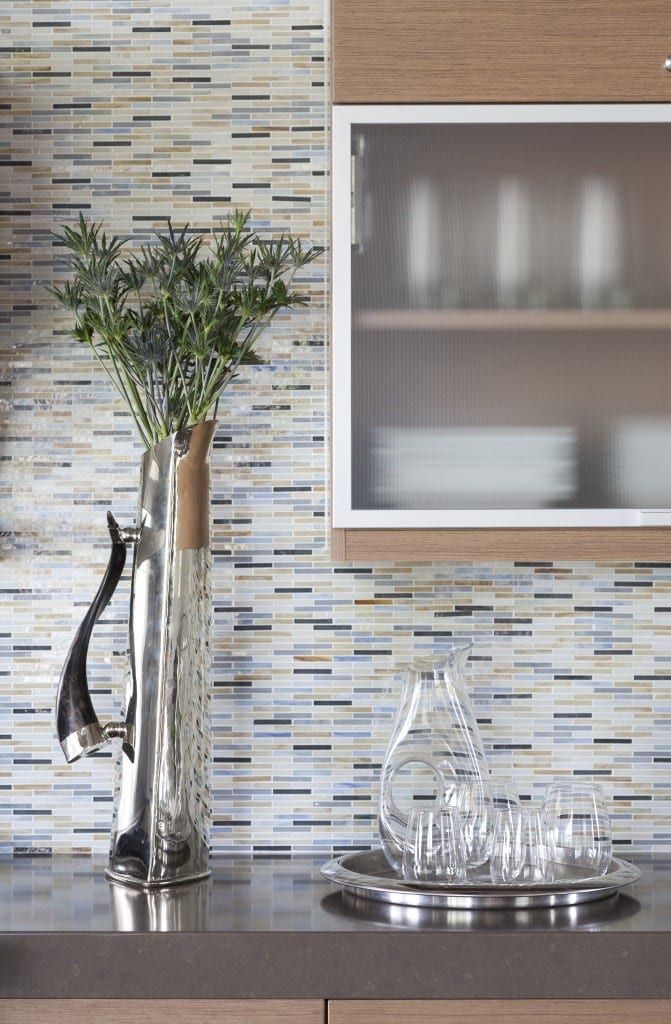 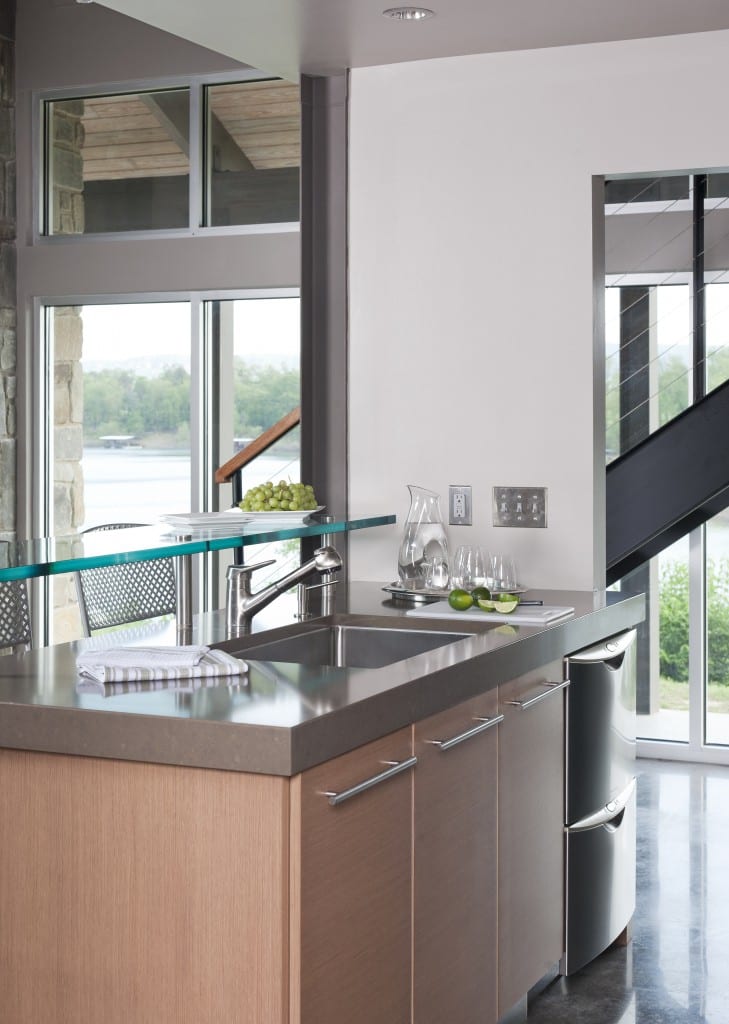 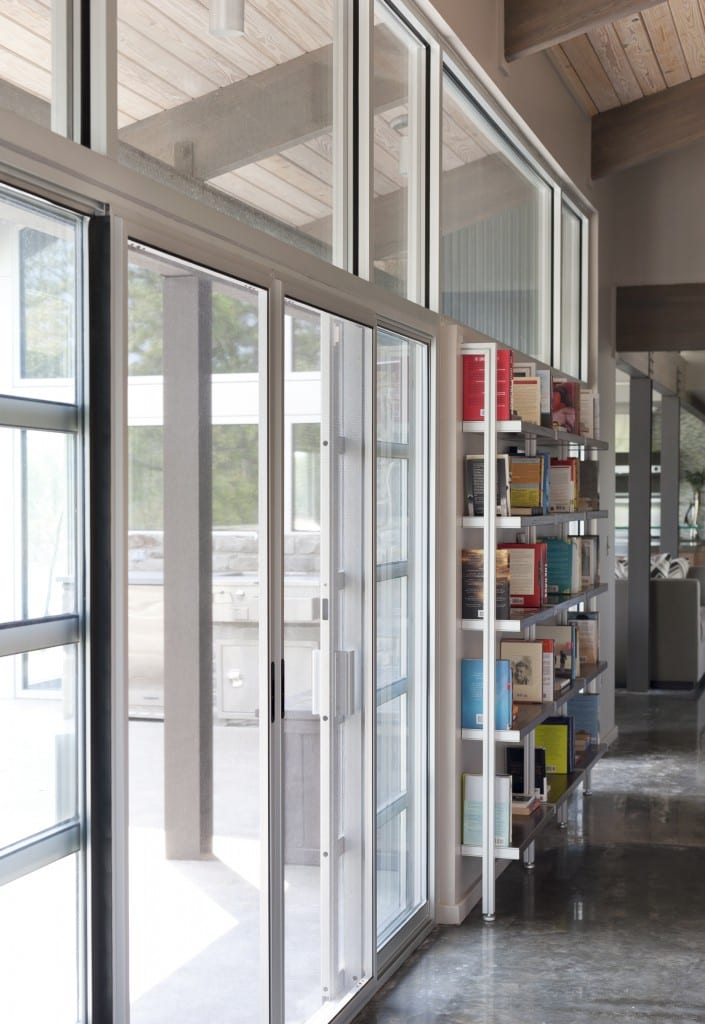 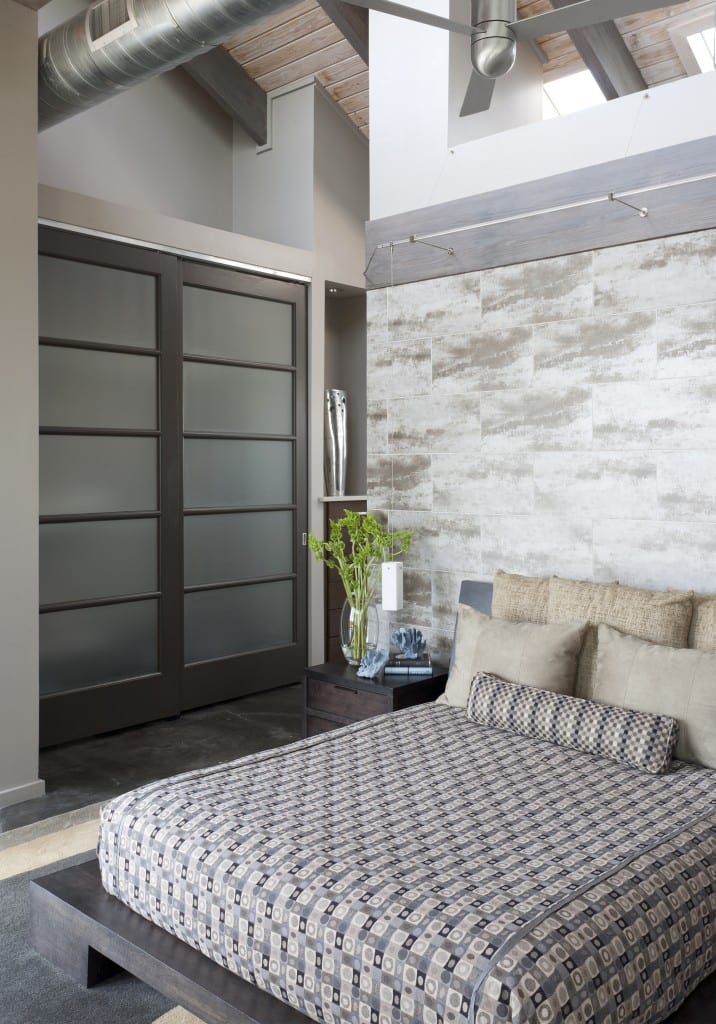 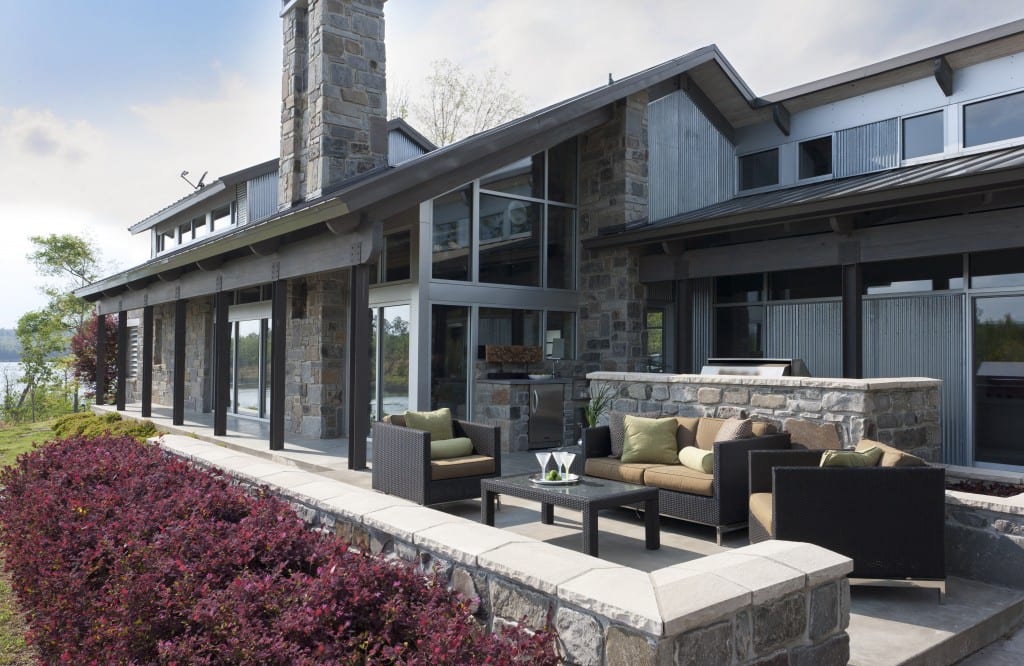 AHIA: Did you draw design ideas from the natural surroundings?

SP: Blending with the environment was a primary goal, and to accomplish that we used stone, metal and glass as building materials. A lot of Arkansas stone homes have gold tones, but this family wanted to go more in the direction of gray tones. The exterior galvanized metal, which may seem like a strong contemporary influence, just sort of fades away in between the stone. We chose commercial windows in aluminum rather than darker bronze, which would have distracted from the views. The floor-to-ceiling windows create the feeling of an outdoor pavilion.

AHIA: How important was stone in the overall design?

SP: The homeowners chose the stone and loved it, and that drove almost every decision about the house, including the color palette of steely blue mixed with browns.

SP: Yes, and the purpose was really twofold. It complements the design. It’s also a part-time house, so we didn’t want constant maintenance. You’ll notice most of the design elements are natural or architecturally interesting pieces.

AHIA: In an open space with so much stone, how did you keep it from becoming cold?

SP: Bringing in warm wood tones helped, and also lowering the support beam in the kitchen to create a lower ceiling there. Overall, it’s definitely a house with many hard surfaces, so we did quite a bit in terms of adding texture, bringing in a rug and pillows in the living room. And of course, while it’s monochromatic, which keeps things fluid, we tried to use warm tones to blend it.

AHIA: An adjoining kitchen could distract from the living room. How did you prevent that?

SP: We kept it simple. The icemaker is tucked out of the way at a bar area. And then the back entry is full of cabinets to use as an overflow pantry. It’s sort of an extension of the kitchen, which the homeowners wanted to be clean and minimal as part of the living area.

AHIA: What’s the biggest difference between designing a home on the water and one that doesn’t have a view?

SP: For us, the first element is always to consider who’s living in the house and how they will live there. But for any house with a great view, the same principles kick in. Here, we said let’s not interrupt the eye. Let’s simplify. Let’s open everything up. We didn’t do anything tricky in the house that would draw the eye away from the views outside.