For Melissa Hall Simmons, redecorating her former Fayetteville home for new owners was a joyful collaboration 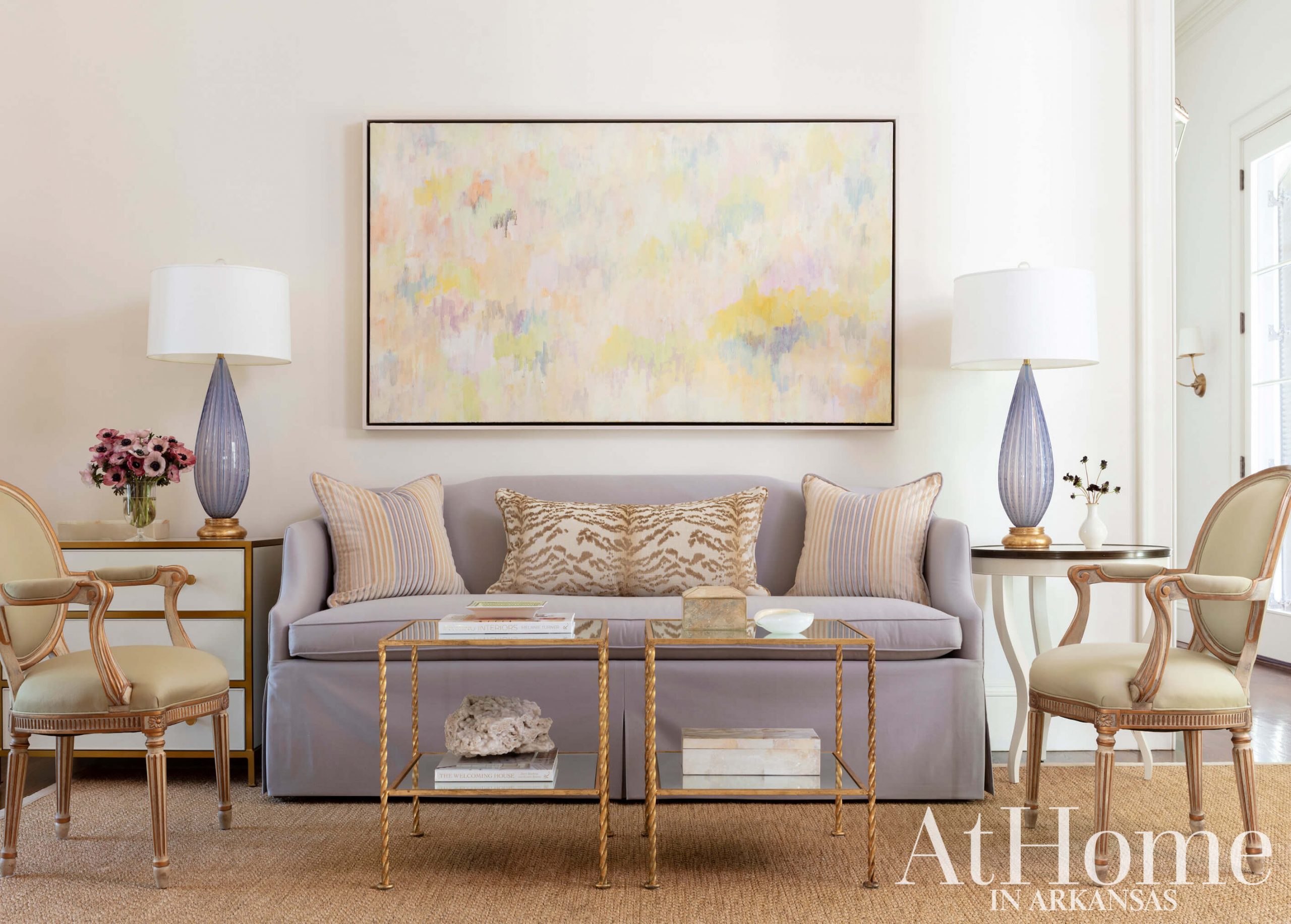 As interior designer Melissa Hall Simmons prepared to put her Fayetteville home on the market, her real estate agent called and asked to show the house to a prospective couple the next day. The couple quickly made an offer and then asked Melissa to help them redecorate, which she says was “the most wonderful opportunity ever.” Melissa designed the house herself from the ground up and called it home for nearly a decade, making her involvement in its new form that much more meaningful. “I actually drew the plans for this house when I was 25, and I fully designed every detail of it,” she says. “It was my first project. It’s what started my business. I was so excited to pass it on to this couple who loves it as much as I do.”

Drawing on elements of French, Mediterranean, and English architecture and design, the home embraces tradition with infusions of contemporary style. Melissa says the new homeowners, Vicki and Gary Jech, were drawn to the way the house was decorated when they first toured it, but the designer wanted to bring more of Vicki’s personality to the space. By displaying pieces from their art collection and personal objects, Melissa was able to avoid the home feeling too brand new. “When you have the opportunity to start fresh, you can lose that feel of originality,” she says. “One of our number one goals is always: Let’s make this authentic to the client.”

While updates in the home were minimal, new light fixtures and refreshed furnishings and décor made the biggest difference. In her selections, Melissa balanced the homeowners’ traditional tastes with their willingness to experiment with modern touches. “She was coming from a home that had an early 2000s, French country aesthetic,” Melissa says. “There were bold colors, a lot of tchotchkes, and everything very much from the same time period. I wanted to respect that she had a traditional aesthetic and, at the same time, embrace that she was willing to take leaps in another direction. I wanted to make sure that those two things came together and spoke her language.”

It was also important that the home be unique to the couple. “We had this amazing time of working through that process in a way that felt authentically her,” Melissa says. When we finished the project, it felt like if this house was a person, we had created her cooler older sister. It was just super fun.” 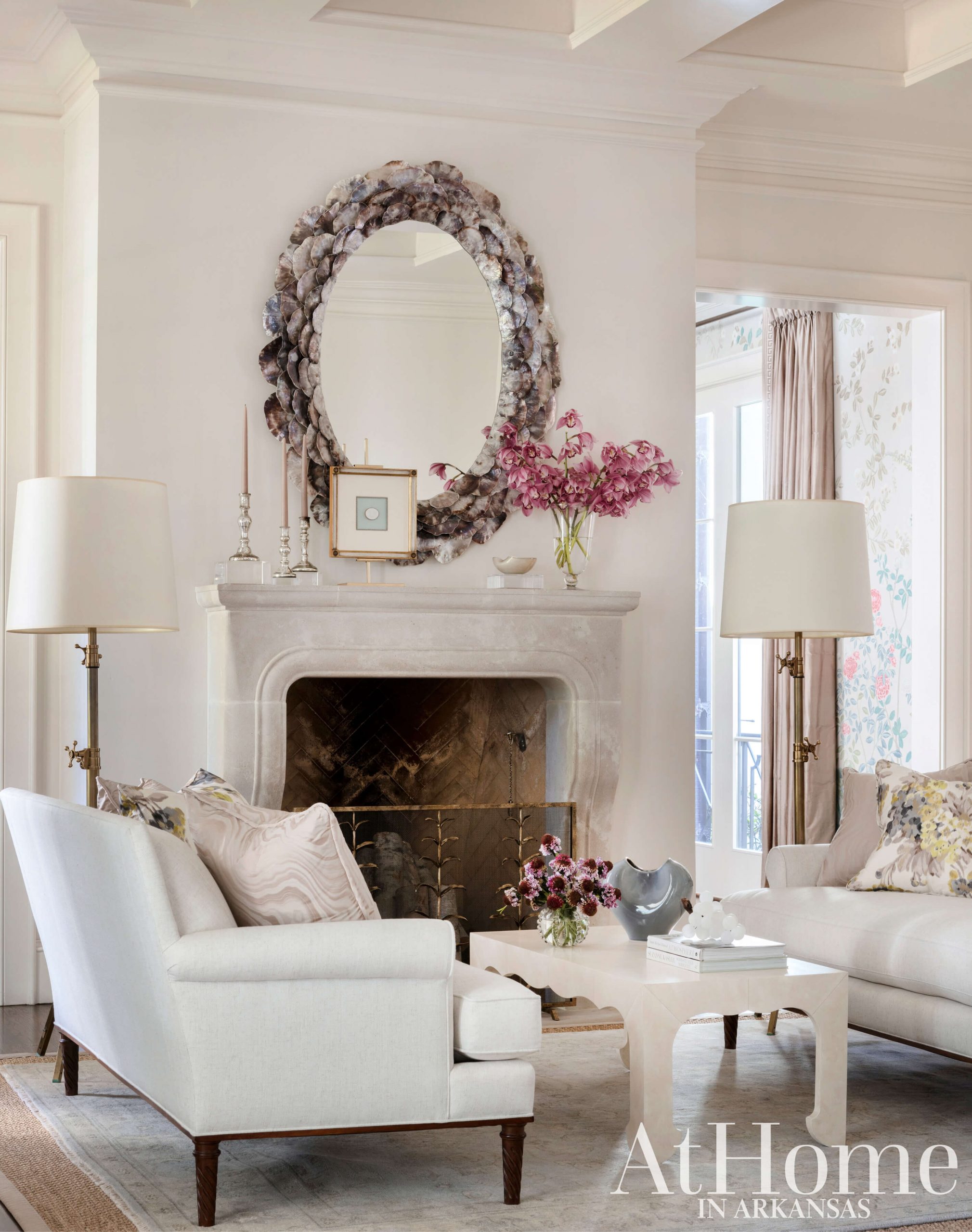 TIMELESS & TRUE
Inspired by how the formal sitting room was styled in a 2012 feature in At Home in Arkansas, the new homeowner wanted to feature matching sofas flanking the fireplace, as well as a large sisal rug layered with a smaller rug on top. The exaggerated height of the fireplaces used throughout was an intentional choice by Melissa when the home was originally built. “These Rumford fire boxes were not commonly used in our area,” she says. “They were not something that people wanted to go through the extent of doing, but I was adamant about this being a very real fireplace.” 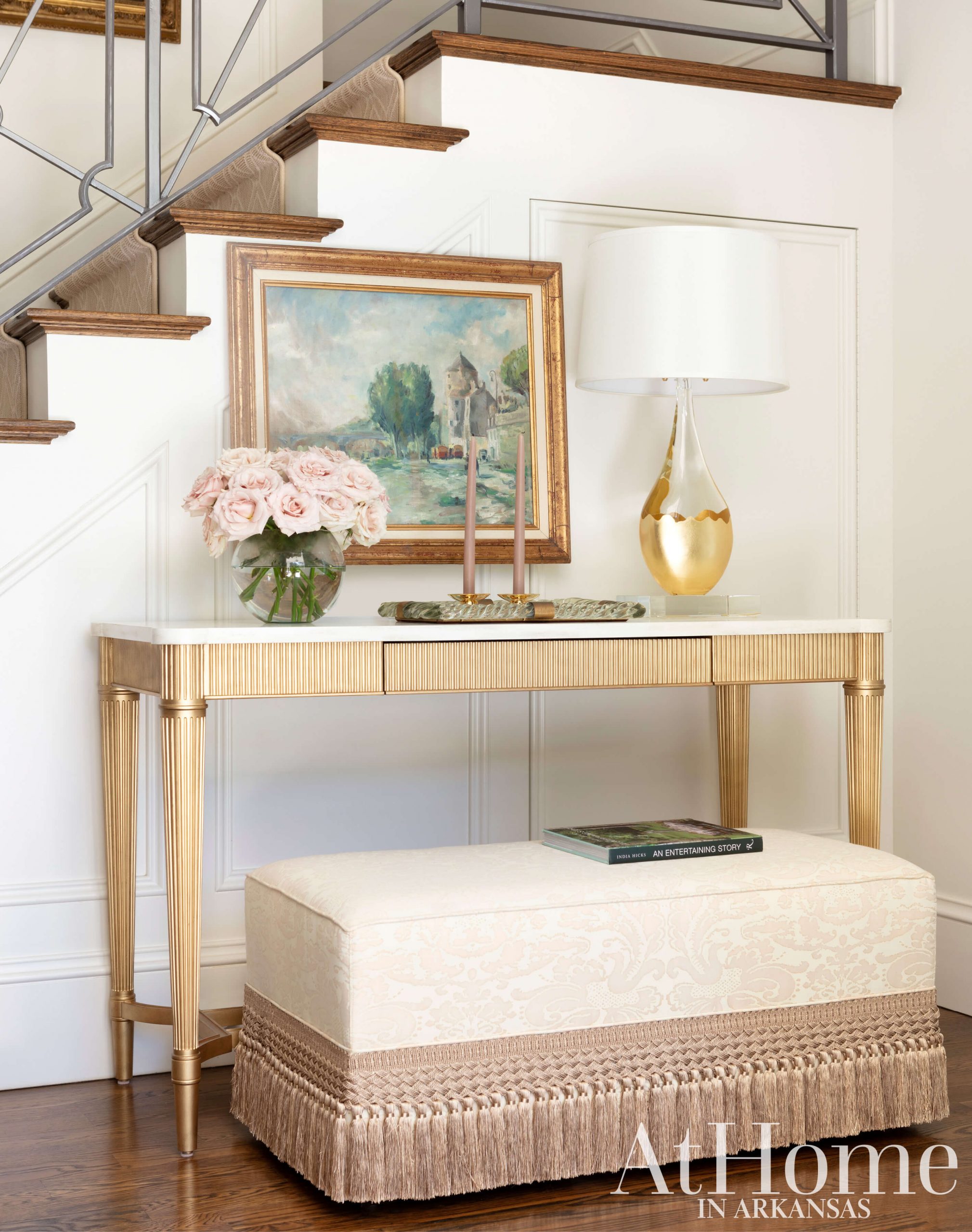 FRENCH MODERN MIX
Melissa says the medallion details on the staircase are a “nod to the French Provincial roots of the house,” and the console table embodies the home’s mix of contemporary and traditional aesthetics. “It has antique roots,” she notes. “It is speaking a language that has traveled through time, and now we’re looking at a reproduction version of it that has a clean and lightweight feel to it.” 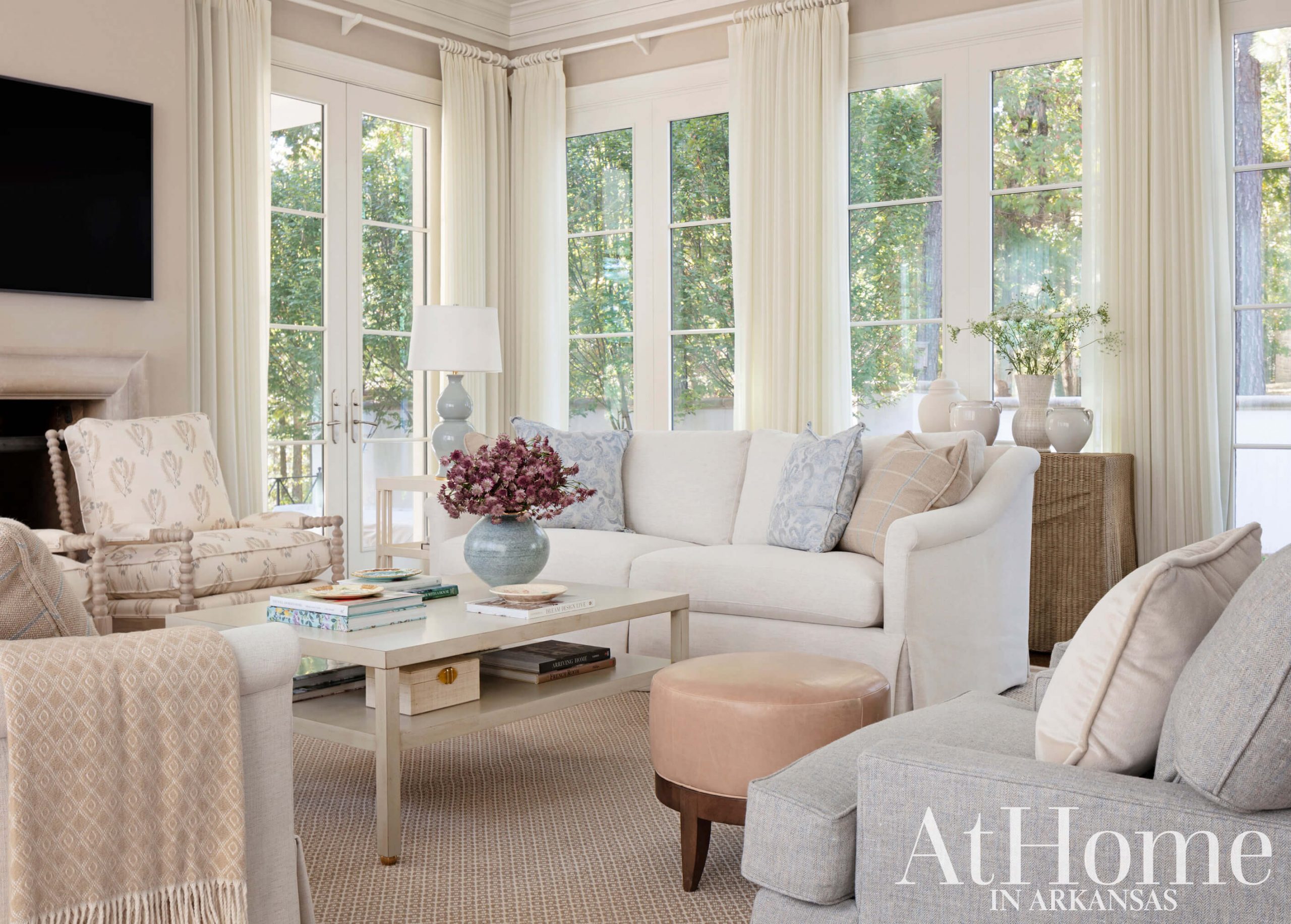 COMFORTABLE & CLASSIC
For homeowners Vicki and Gary, the family room was “all about being comfortable, where they can sit together as a couple every evening and relax,” Melissa says. The room features a mix of traditional lines—such as those of the sofas and cozy club chair—with nods to French modern design, as seen in the coffee table and ottoman stool. 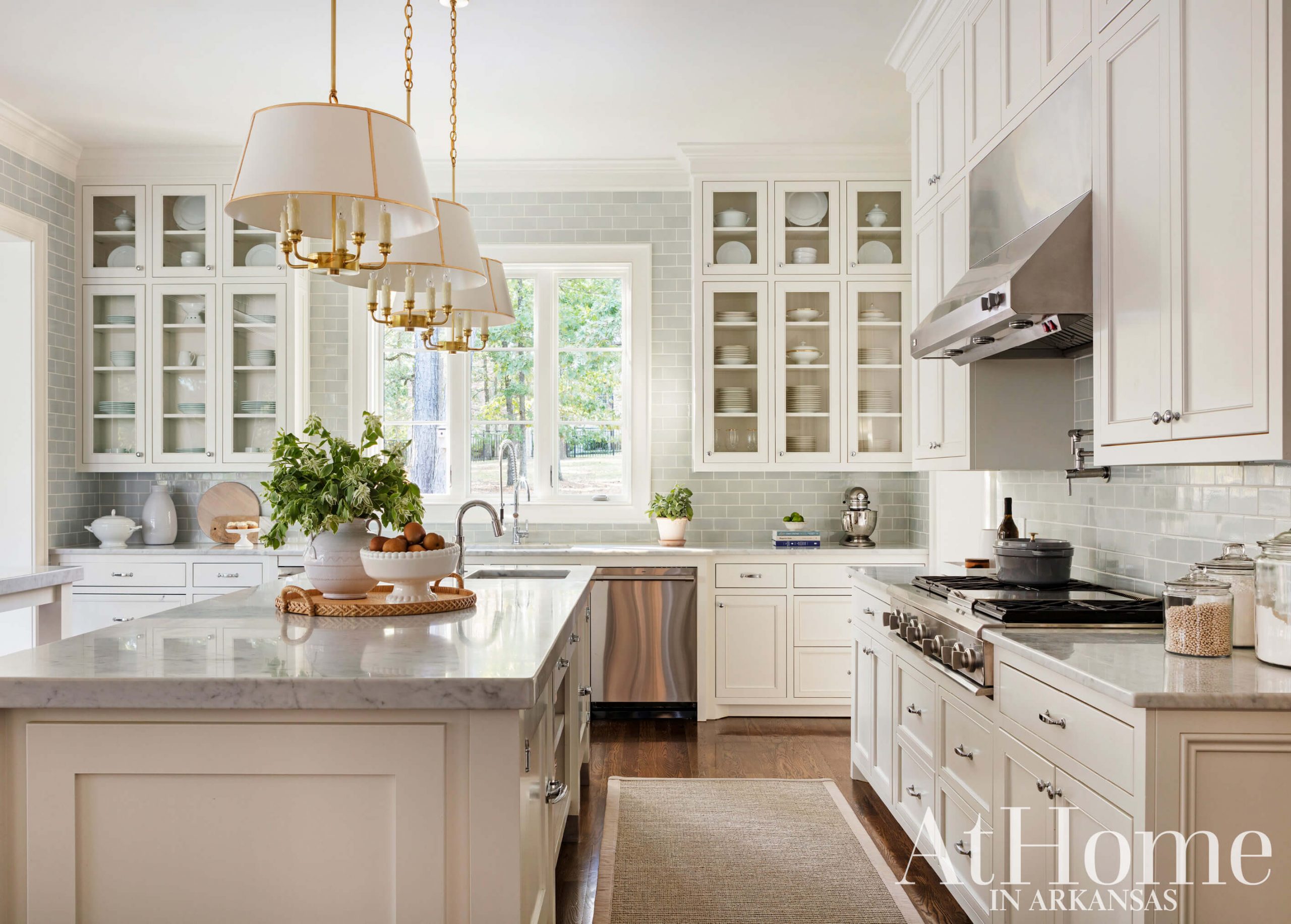 EASY GATHERING PLACE
The new homeowners opted to switch out the kitchen’s former industrial light fixtures for more traditional shaded pendants with a touch of brass. With an open flow between the kitchen and family room, the space is optimal for a couple who enjoys tuning into the morning news together. “It feels like a space for eating that doesn’t require a big commitment,” Melissa says. “For people who are on the go, it is so nice. You’re in the middle of everything, and we all know how everyone gathers in the kitchen.” 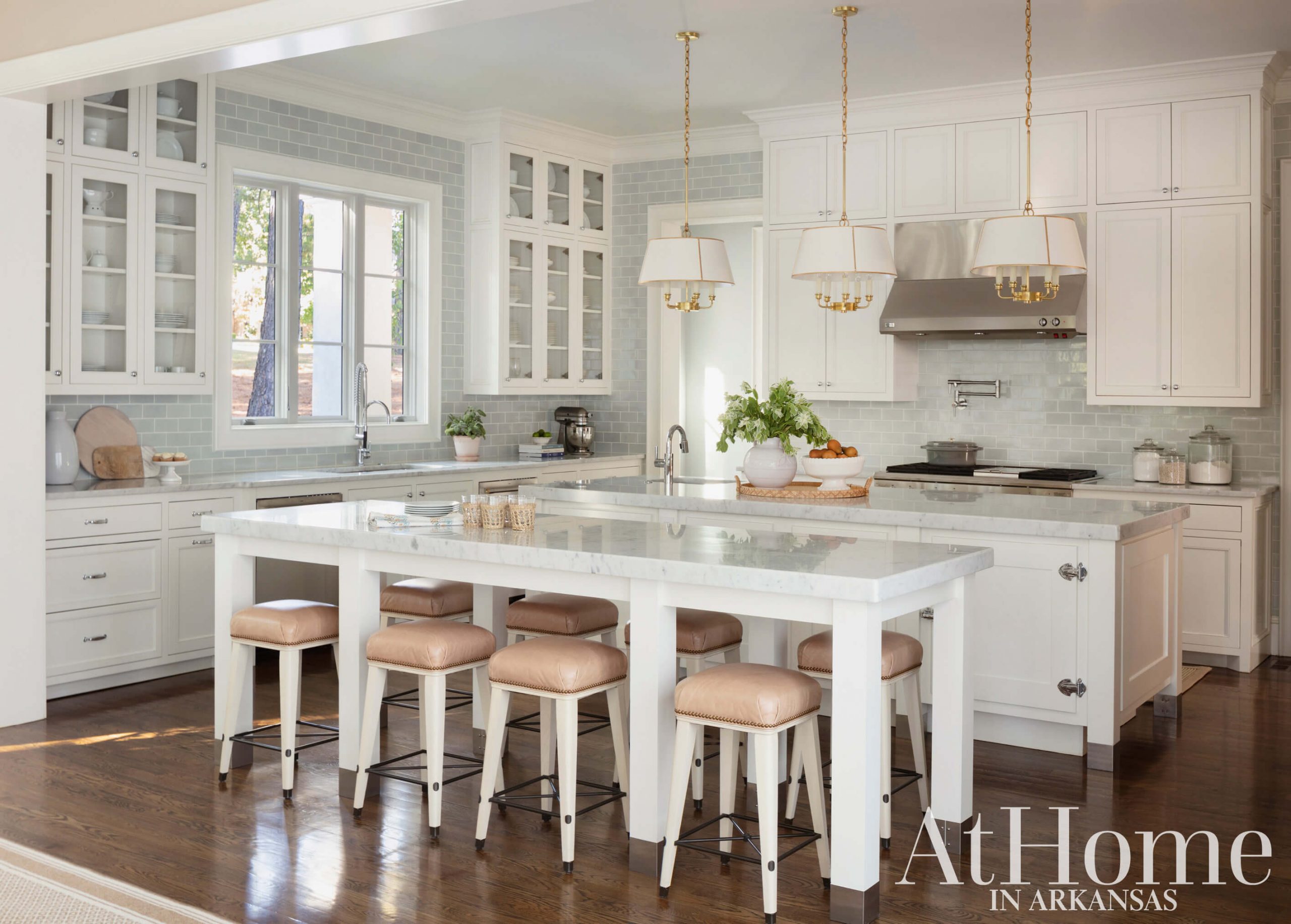 Barstools upholstered in an easy-to-wipe fabric provide casual seating during meals and parties.

“I wanted to respect that she had a traditional aesthetic and, at the same time, embrace that she was willing to take leaps in another direction.” —Melissa Hall Simmons, designer 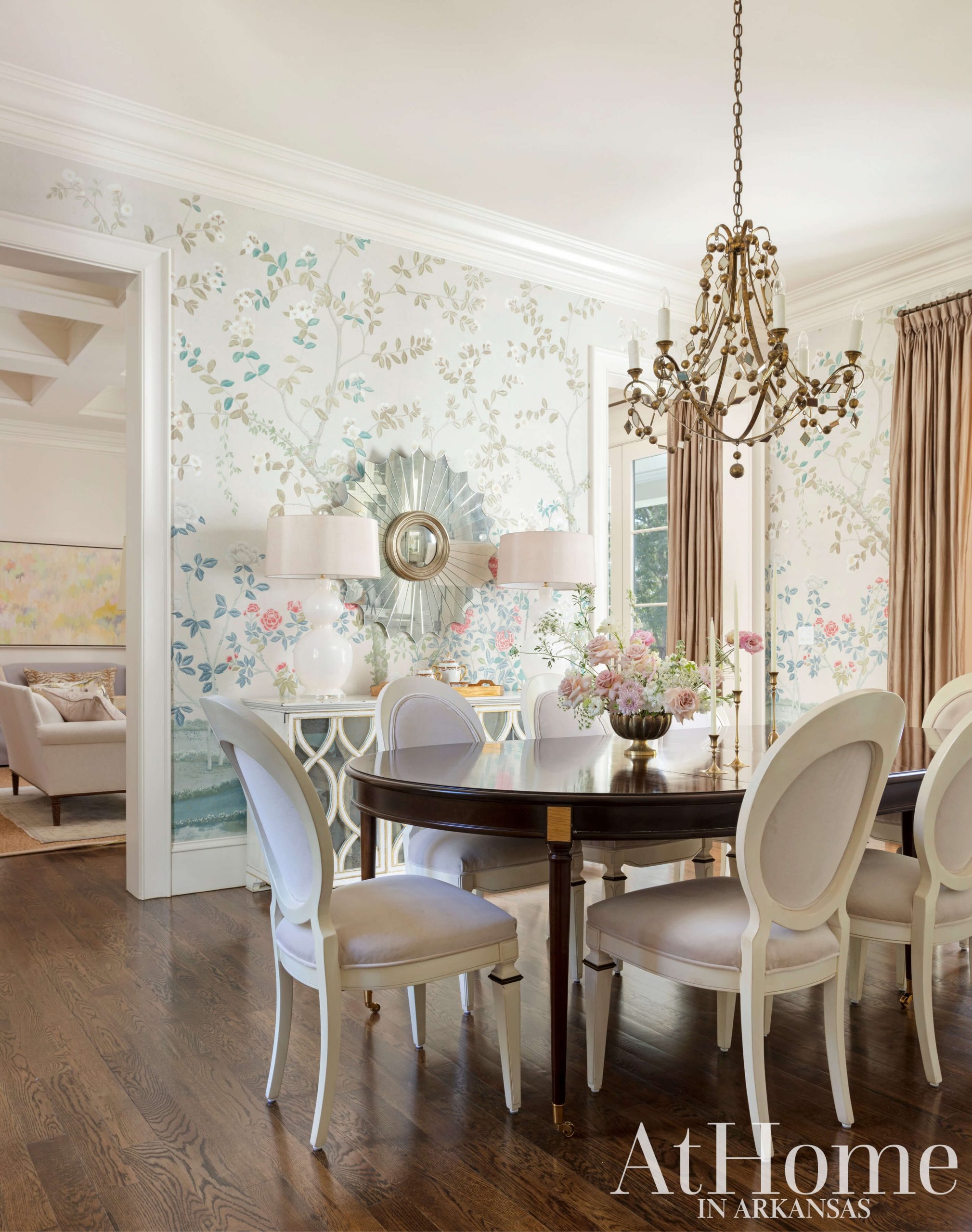 STUNNING STATEMENT
Melissa coveted this Schumacher wallpaper for years before having it installed here. “When I put that wallpaper in, it just transformed the house,” she says. “Vicki loved it too. The colors are so stunning, and it works perfectly. It’s art. It didn’t need anything else.” Vicki also chose to keep the dining room’s sunburst mirror and buffet, both part of Melissa’s original design of the space, while oval-back dining chairs update the look. 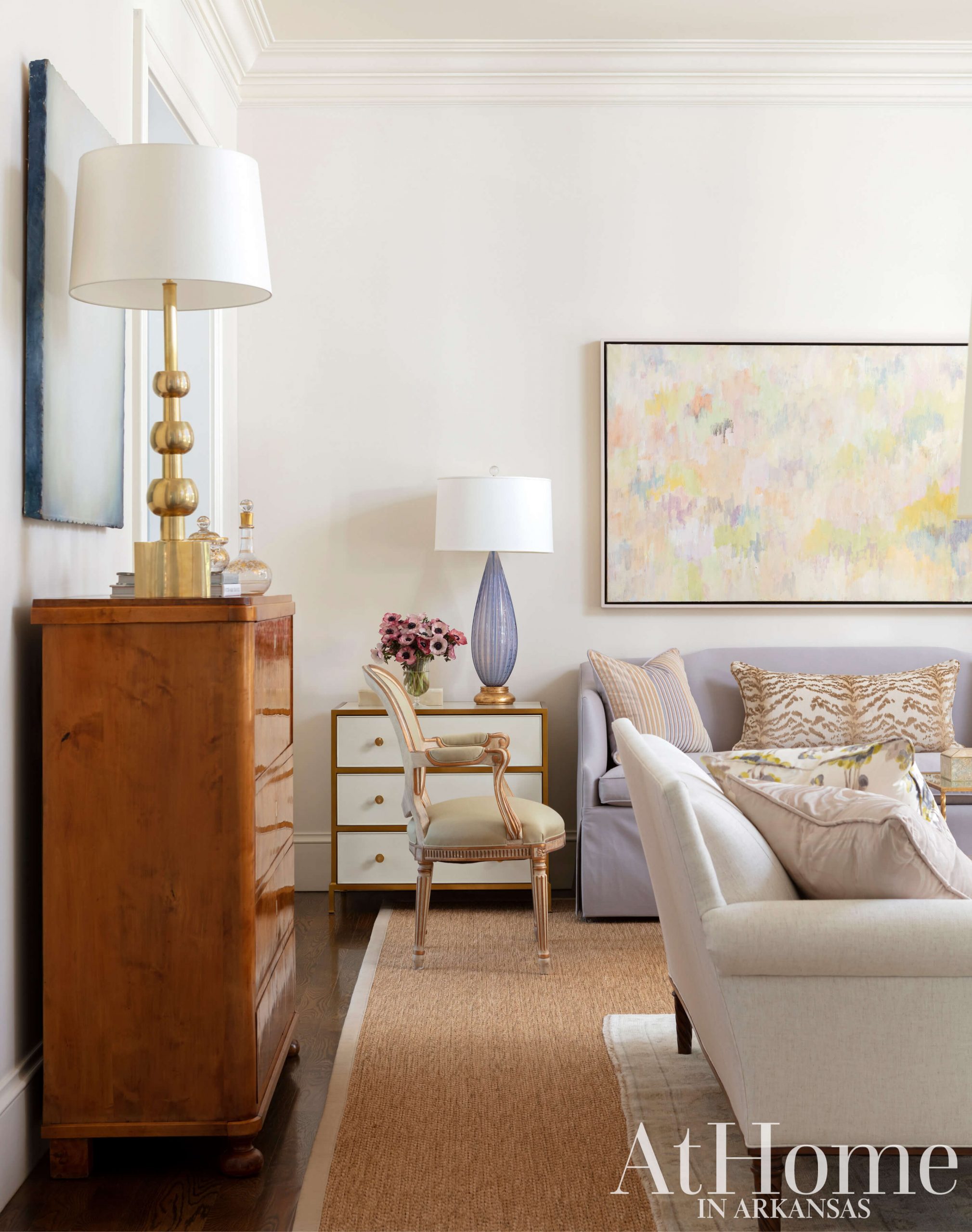 HISTORICAL APPROACH
Warm woods mix with creams and purples to create a bright, inviting living room, complete with lavender Murano glass lamps and an antique Biedermeier secretary. “Biedermeier began in Central and Eastern Europe as a style of furniture that was meant to be all about the wood and less about the carvings and ornateness of French antiques,” Melissa says. “This Biedermeier is sort of stripped down and clean, but so dramatic. The wood patterns and bookmatching they did is so beautiful.” A painting by Washington, D.C., artist
Robert Rea highlights the room’s lavender hues. 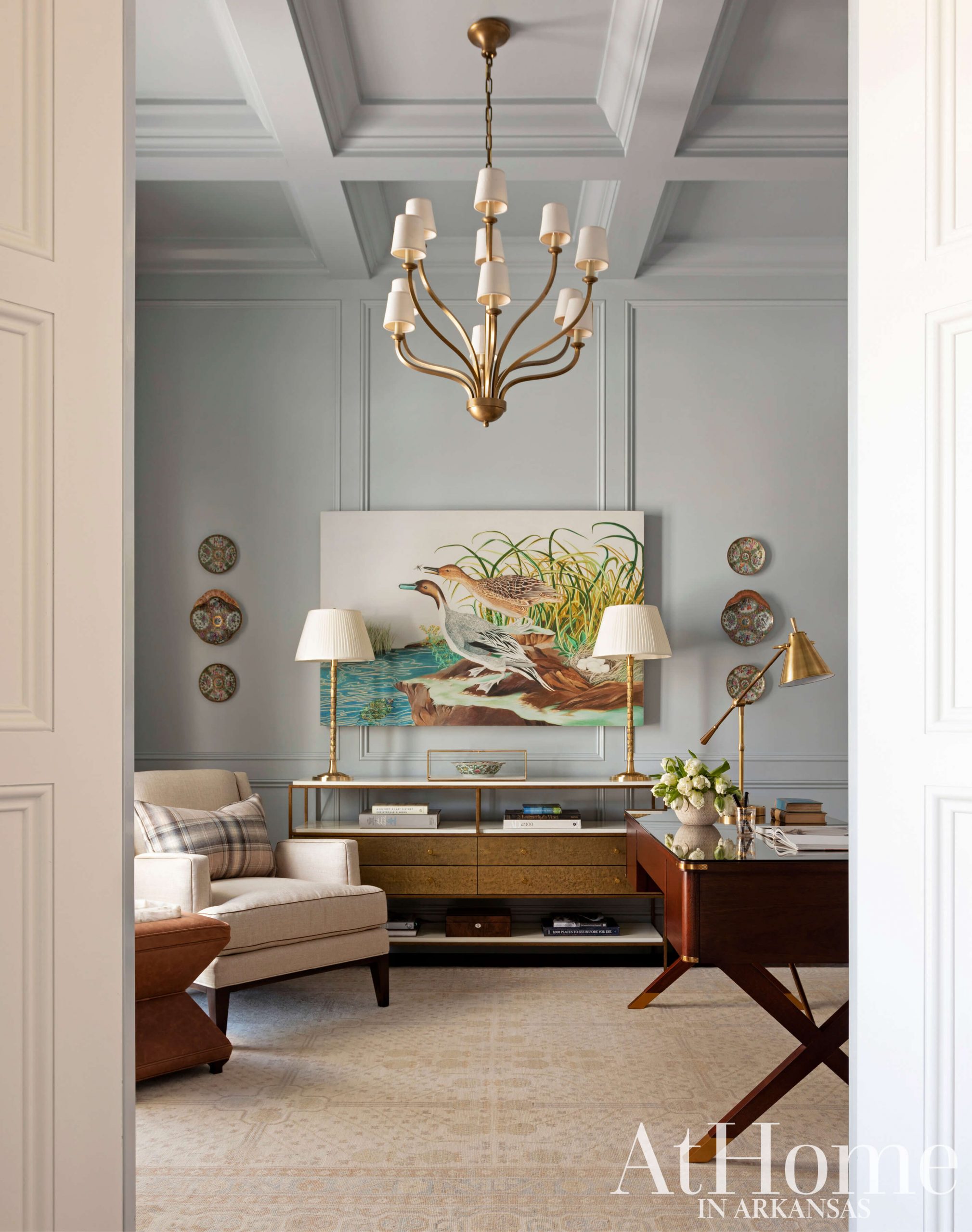 STUDIED EFFECT
While this space was used as a playroom in its former iteration, the study now leans masculine and displays many meaningful objects for its new owners. “This room is the perfect blend,” Melissa says. “This is her dishware that she’s been collecting for years, and we have these glass shadow boxes throughout with things that were from her old house. It feels very personal to them.” Art depicting a pair of waterfowl is from Texas artist Natalie Erwin’s Audubon series. 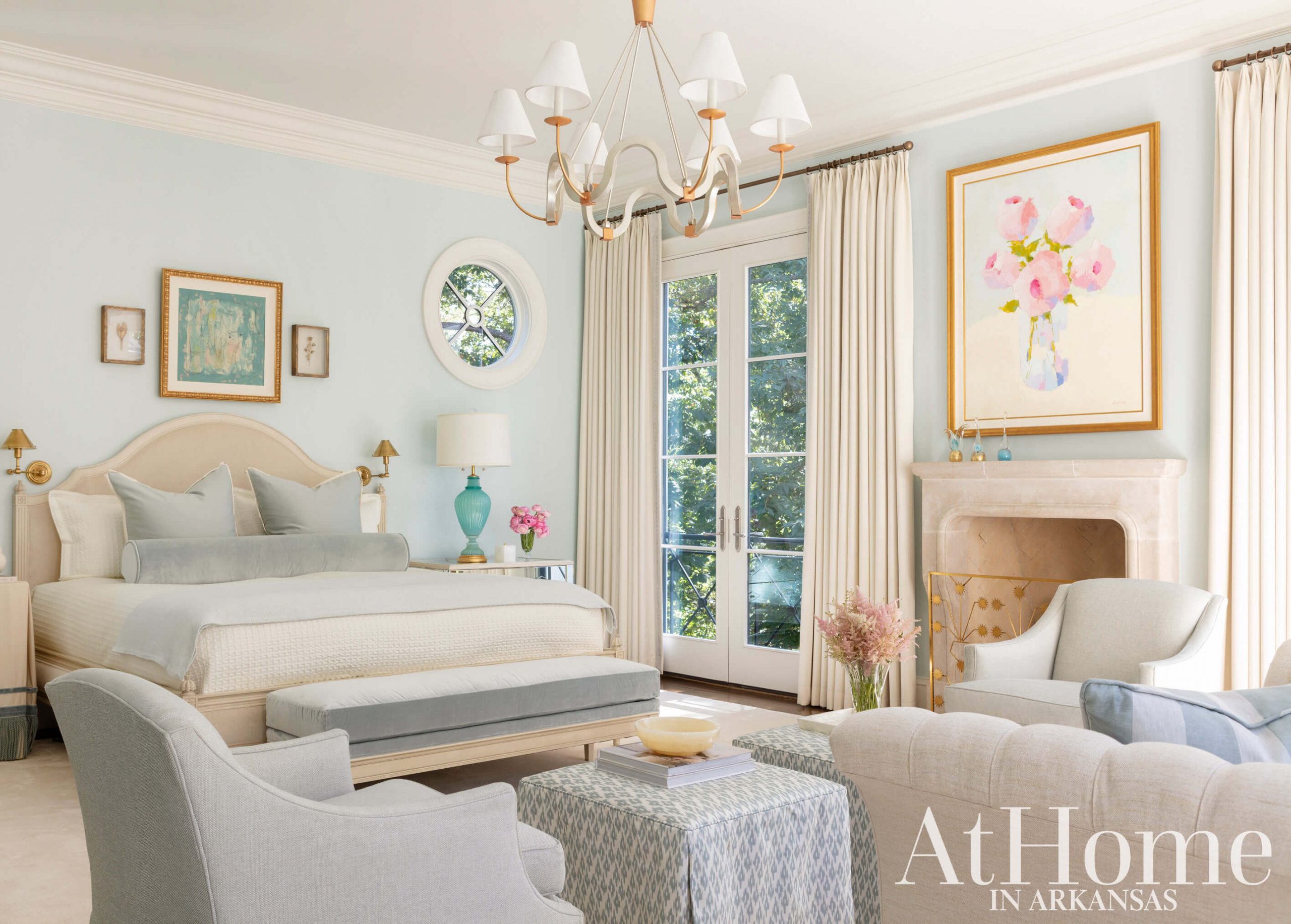 LIGHT & BRIGHT OASIS
A palette of soft blue hues envelops the primary bedroom. With tailored furnishings, a curving chandelier, and eye-catching artwork by Carol Maguire, the space is “exactly the way I wanted it to be for Vicki,” Melissa says. “It was a super fun room to create and put together, and I’m so happy with the way it turned out. It feels like her, and I love that.” 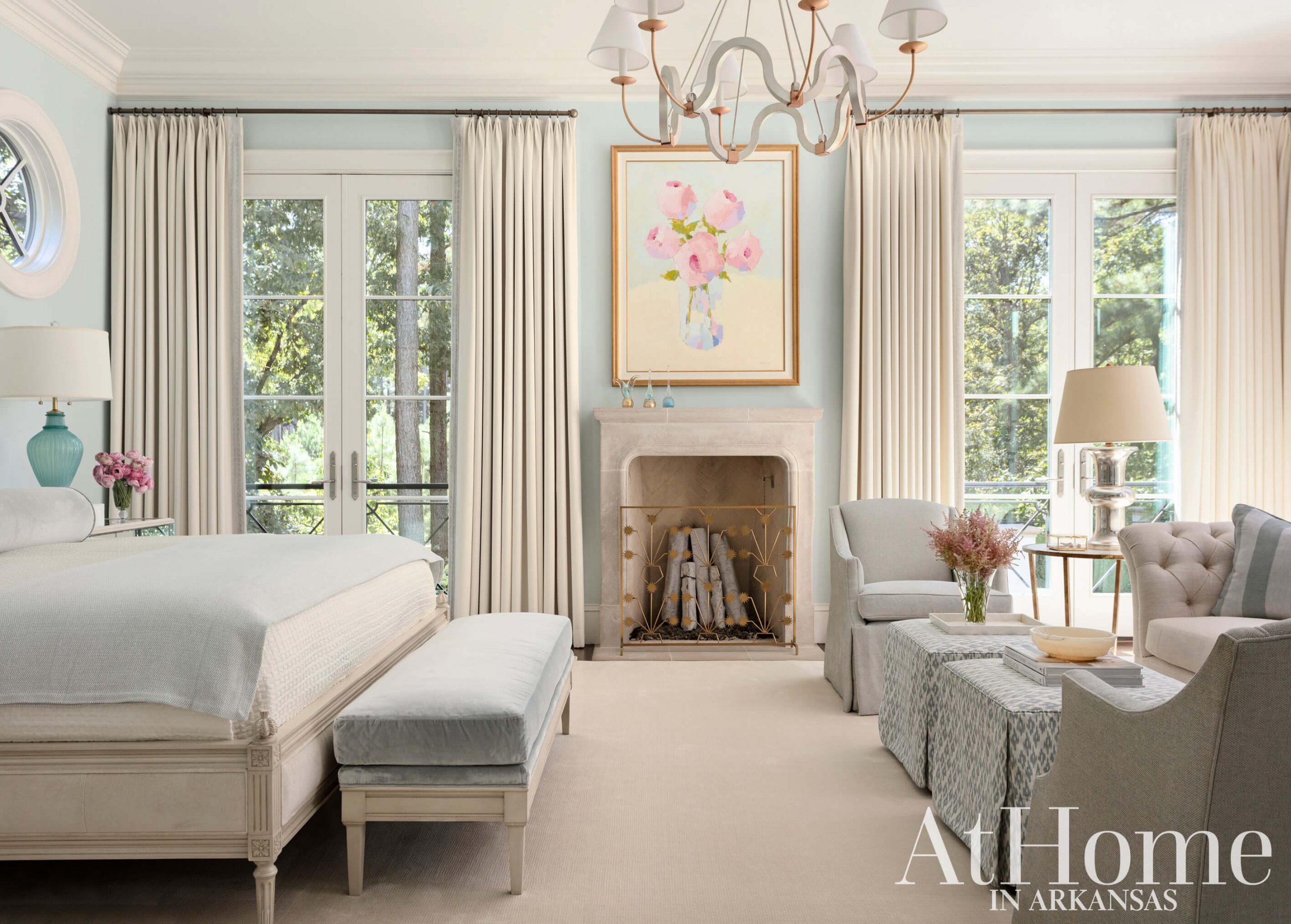 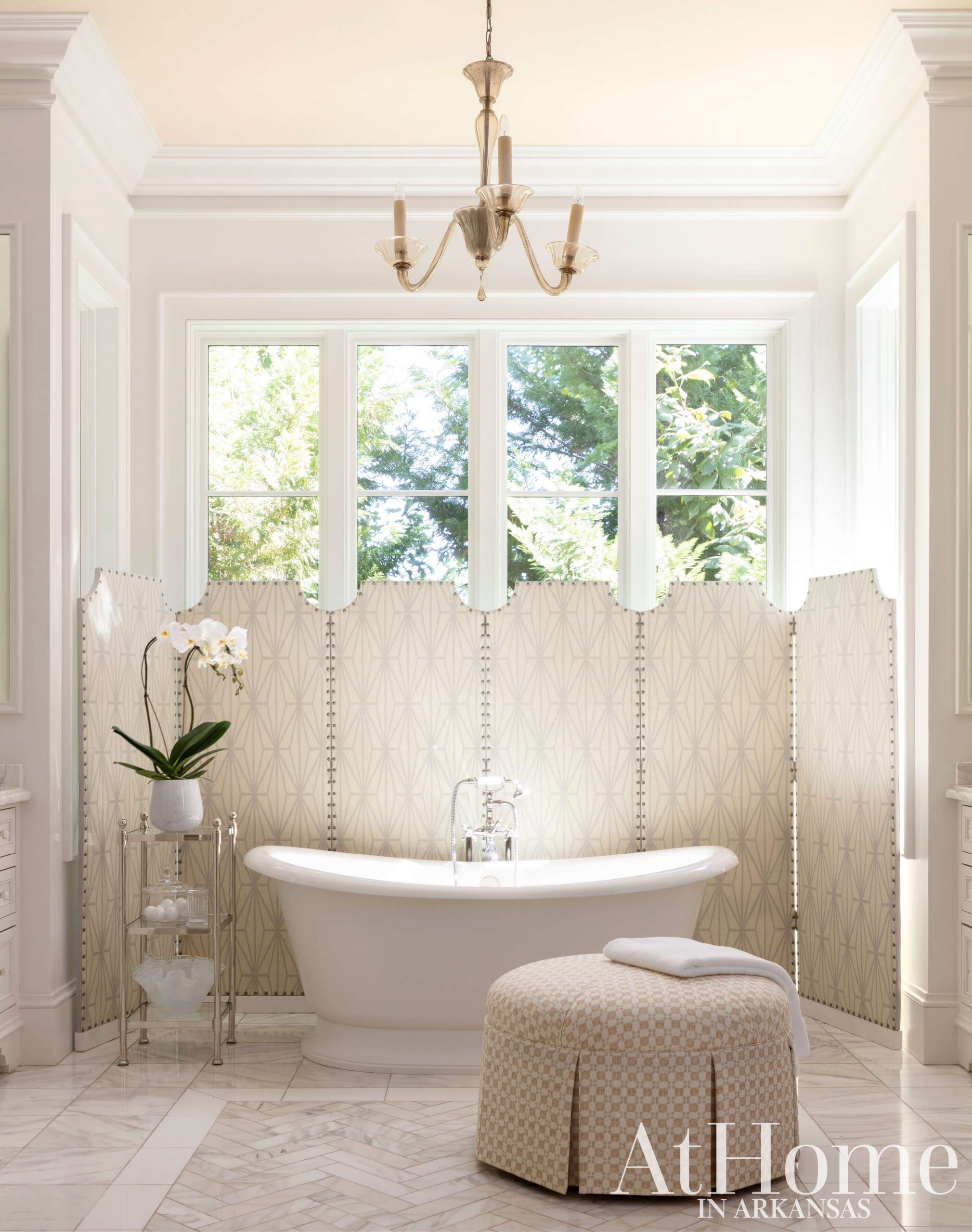 TREETOP VIEWS
Aside from switching out the former claw foot bathtub for a deep, soaking pedestal style, the primary bath boasts much of Melissa’s original design, including the inlaid herringbone tile and privacy screen. “I love natural light, and a bathroom window that’s covered is just so sad to me,” Melissa says. “This screen is perfect. There’s complete privacy, and you feel like you’re out in the middle of nowhere.”