More than five decades after it was built, a Fayetteville home designed by architect Ernie Jacks still serves as a testament to his craft. 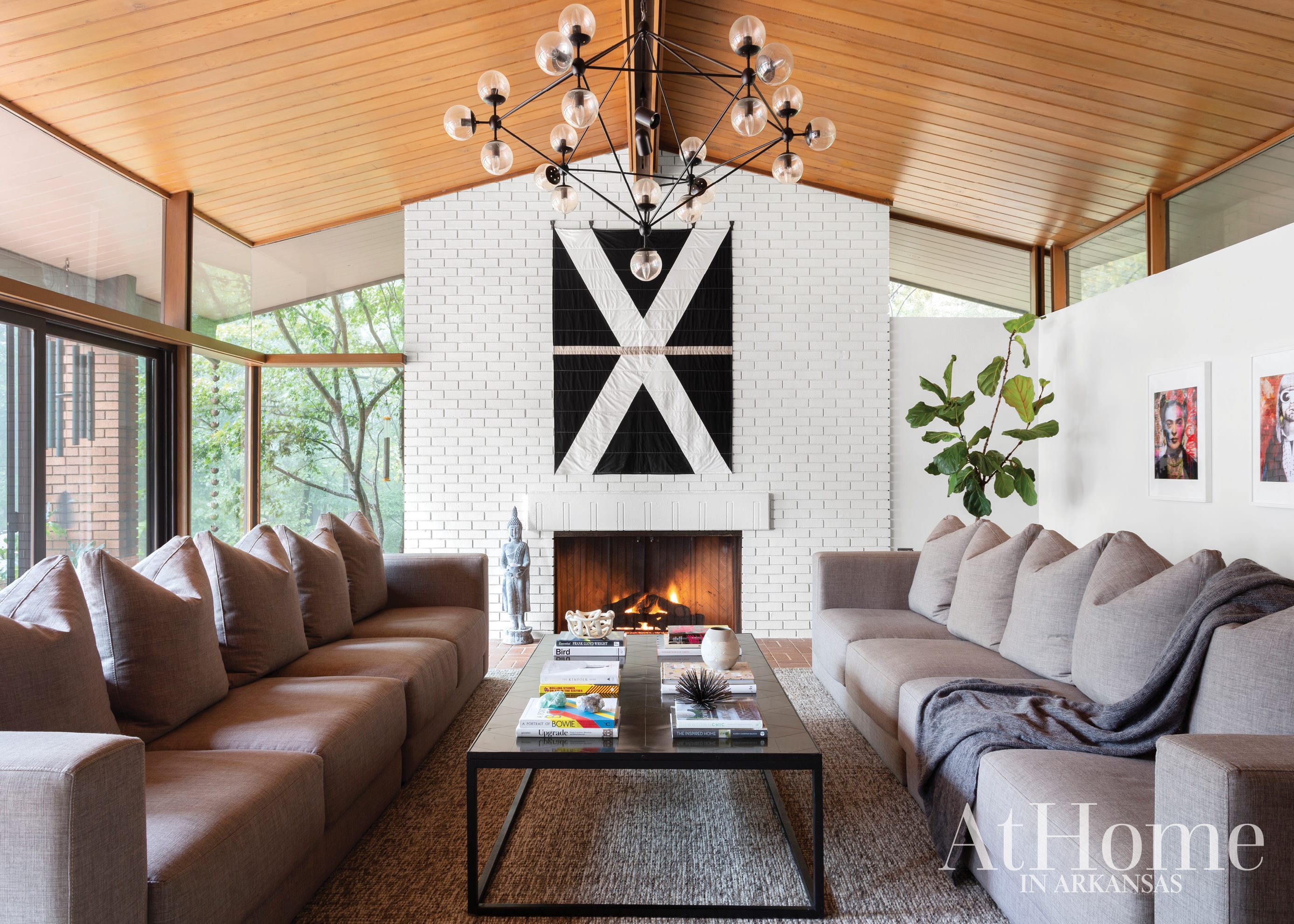 Get Fayetteville native Justine Rose talking about her house, and her reverence for the man who designed it—midcentury modern architect Ernie Jacks—is abundantly clear. “Ernie was so forward thinking when building this house. He was very thoughtful in his placement of rooms, and even the placement of the actual house is amazing,” she says, referring to the way the home is built into a hillside overlooking Mount Sequoyah Woods.

Ernie Jacks moved to Fayetteville in 1946 to take the University of Arkansas’s first architecture courses along with 16 other students—one of whom was Fay Jones, another notable Arkansas architect and the future namesake of the university’s School of Architecture and Design. Ernie’s career took him to New York, California, and back to Fayetteville, where he taught architecture and took commissions— including Justine’s home, which was built in 1965.

The first time Justine saw the house on the market, she wasn’t quite ready to commit. “It was darker and more masculine than I was used to,” she says. “Plus, it’s intimidating to update a home by an architect like Ernie.” But the second time she saw it for sale, she’d had a change of heart—thanks in part to a recent trip to visit her sister in California. “I was falling in love with this midcentury vibe I’d seen out there, but my aesthetic is lighter, airier,” she says. Inspired to breathe new life (and a West Coast flair) into this historic home, Justine took the plunge and bought the house. She and her husband, David, and sons, Jack, 15, and Eli, 14, moved from a more traditional home less than a mile away and got to work making it their own.

While Justine left the layout untouched, she painted select walls a creamy white to achieve the “lighter, airier” feel she desired. This allowed the remaining wood and brick found on the walls, ceiling, millwork, and floors to act as her accent colors. “I started off slow, and that’s when I started seeing the vision come to life,” she says. From there, Justine filled the home with comfortable, midcentury-inspired light fixtures and furnishings as well as accessories and art collected from estate sales and her travels over the years. The effect is a calming, California-inspired retreat that preserves the integrity of the architect’s design. “We stayed within the footprint and the time period, but made updates to make it work for us and for today,” she says. 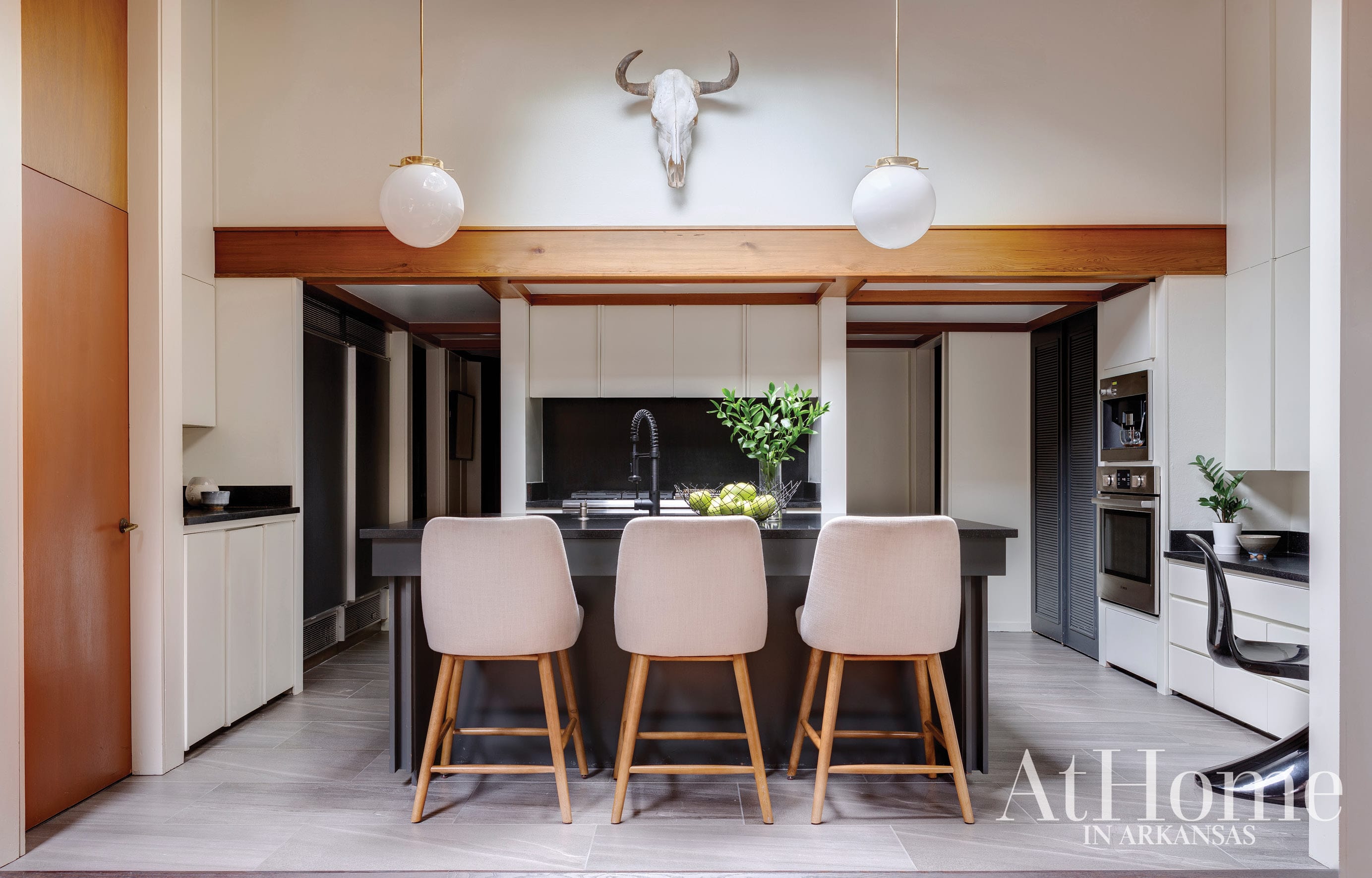 Dining in Style
In the kitchen, Justine installed new appliances, replaced linoleum flooring (which had been added in a previous renovation) with a large-scale 18-by-36-inch tile, and painted the island Sherwin-Williams’ “Iron Ore” to match existing pantry doors. Across from the island, a breakfast area overlooks the downstairs family room. Justine furnished this space with a sputnik-style light fixture and tulip table to speak to the home’s era. 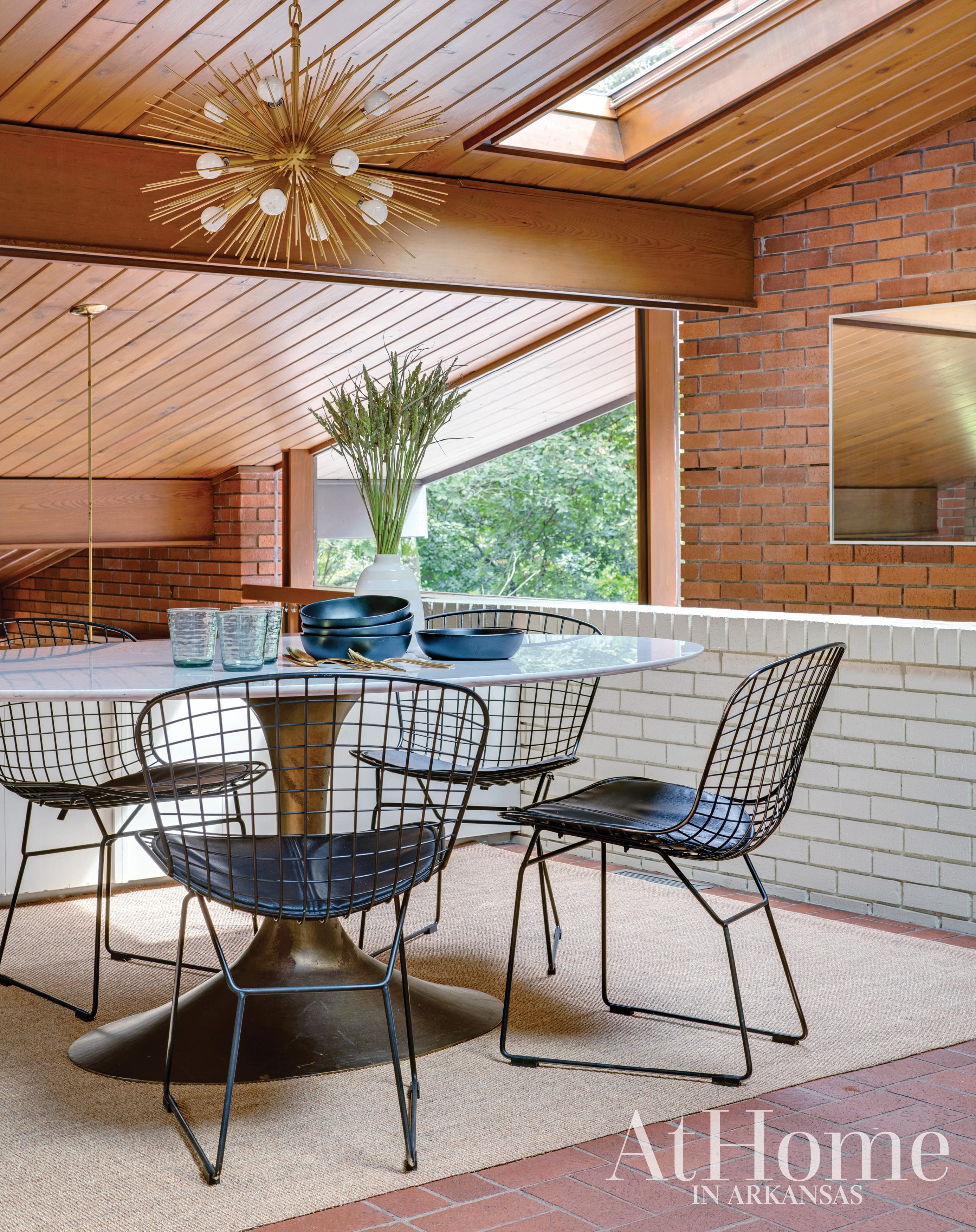 Midcentury Hallmarks
In the dining room, a paneled wall of hidden cabinetry and open shelving are an example of the utilitarian considerations at the core of midcentury modern design. Another notable aspect of this room’s design is the use of floor-to-ceiling windows and sliding glass doors to emphasize the connection between the indoor and outdoor spaces.

“We stayed within the footprint and the time period, but made updates to make it work for us and for today.”
—Justine Rose 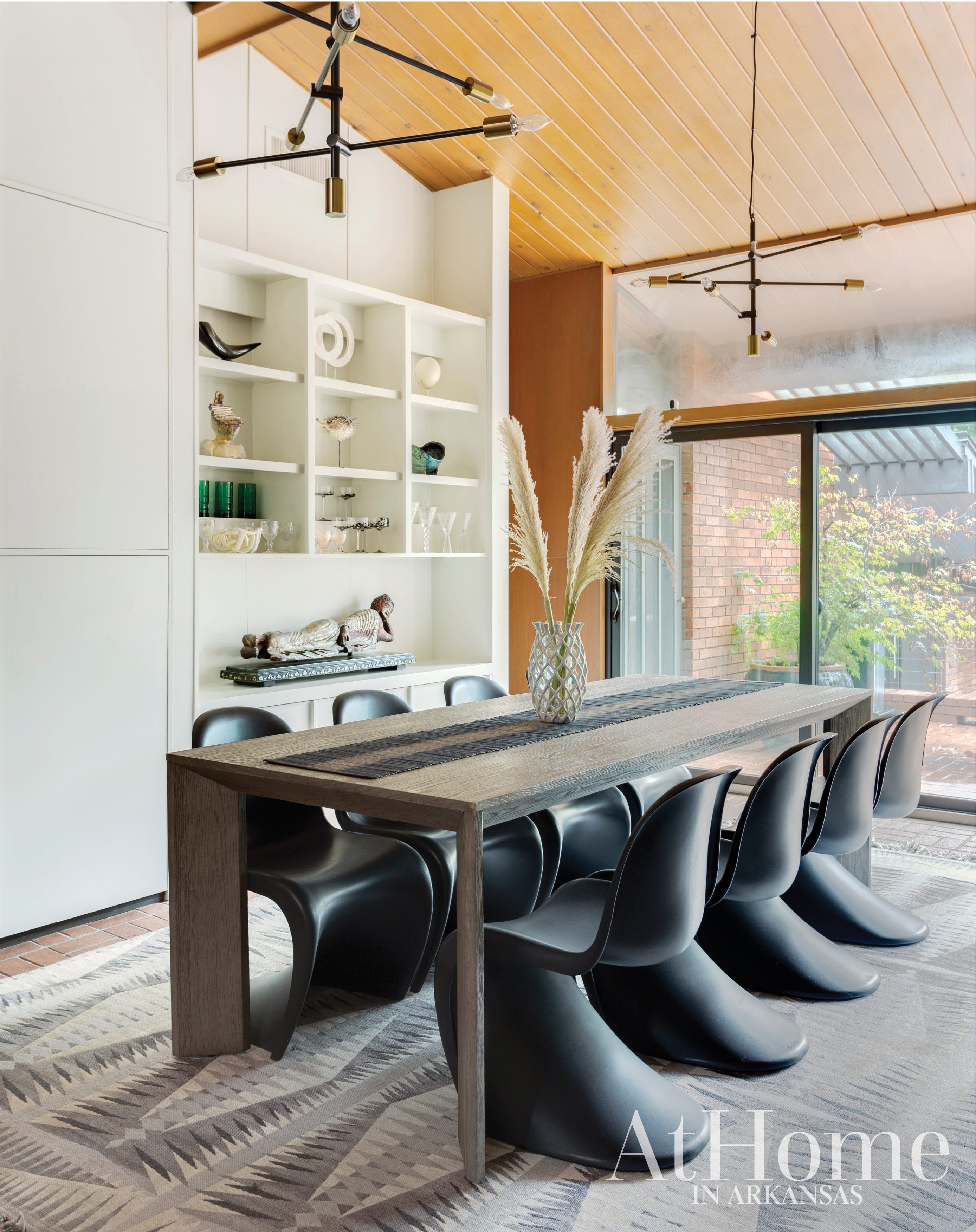 Justine bought eight original Panton chairs—a style made famous by Danish designer Verner Panton in the 1960s—at an estate sale a year before she knew she’d soon be calling a midcentury house her home. 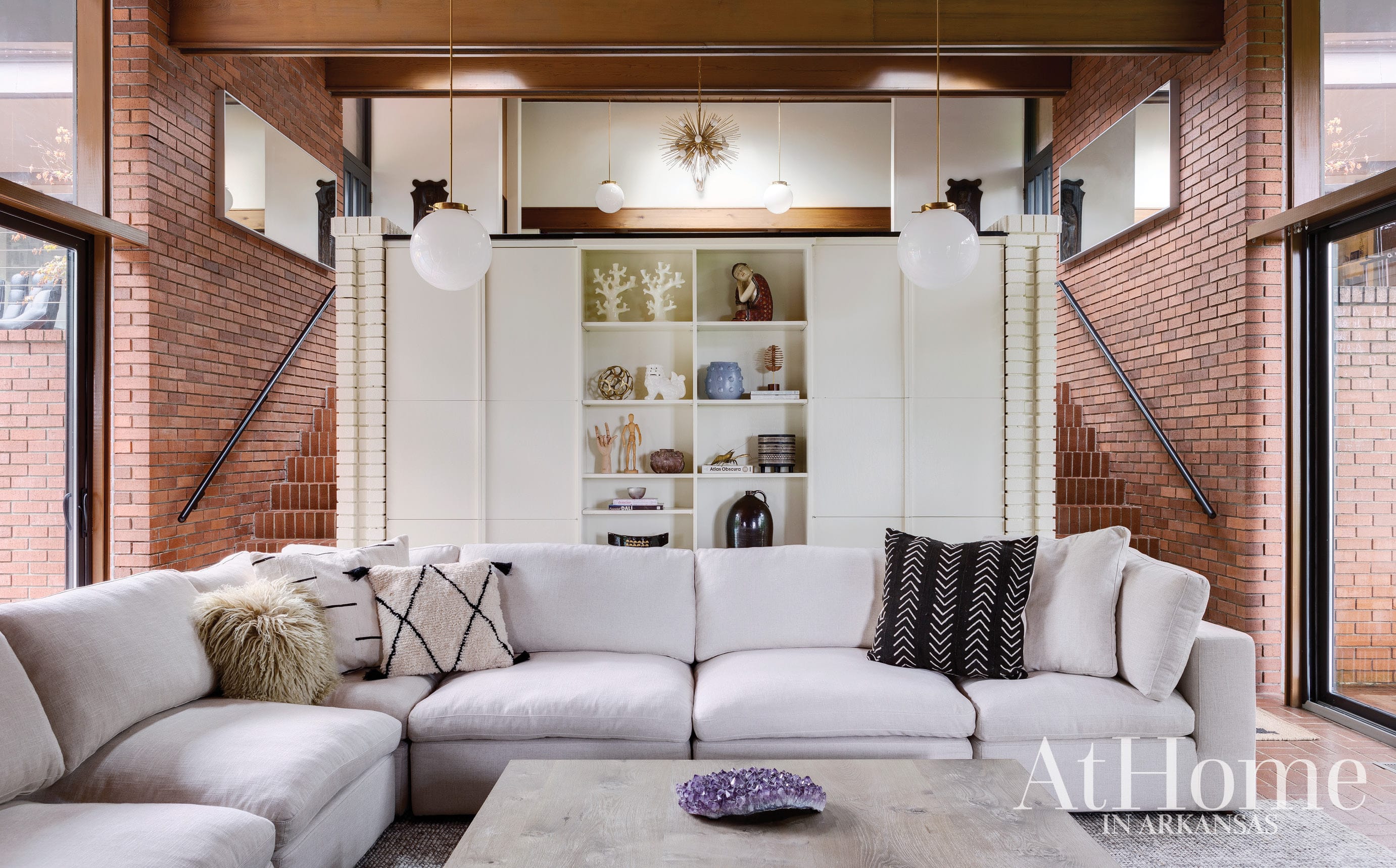 Personal Space
Justine credits interior designer Casey Sarkin with giving her the courage to paint sections of the house. “She came over and saw the house, and she said, The best thing you can do is not be afraid to update this house. It’s your house, and it needs it,” Justine recalls. In painting a select few walls, Justine hoped to maintain the home’s overall style while giving the eye a chance to rest from time to time. An example of this is found in a sunken family room below the kitchen and breakfast area where only the built-ins are painted. White pendants repeated from the kitchen are original to the house, and the layout of the room is an example of the architect’s penchant for symmetry. 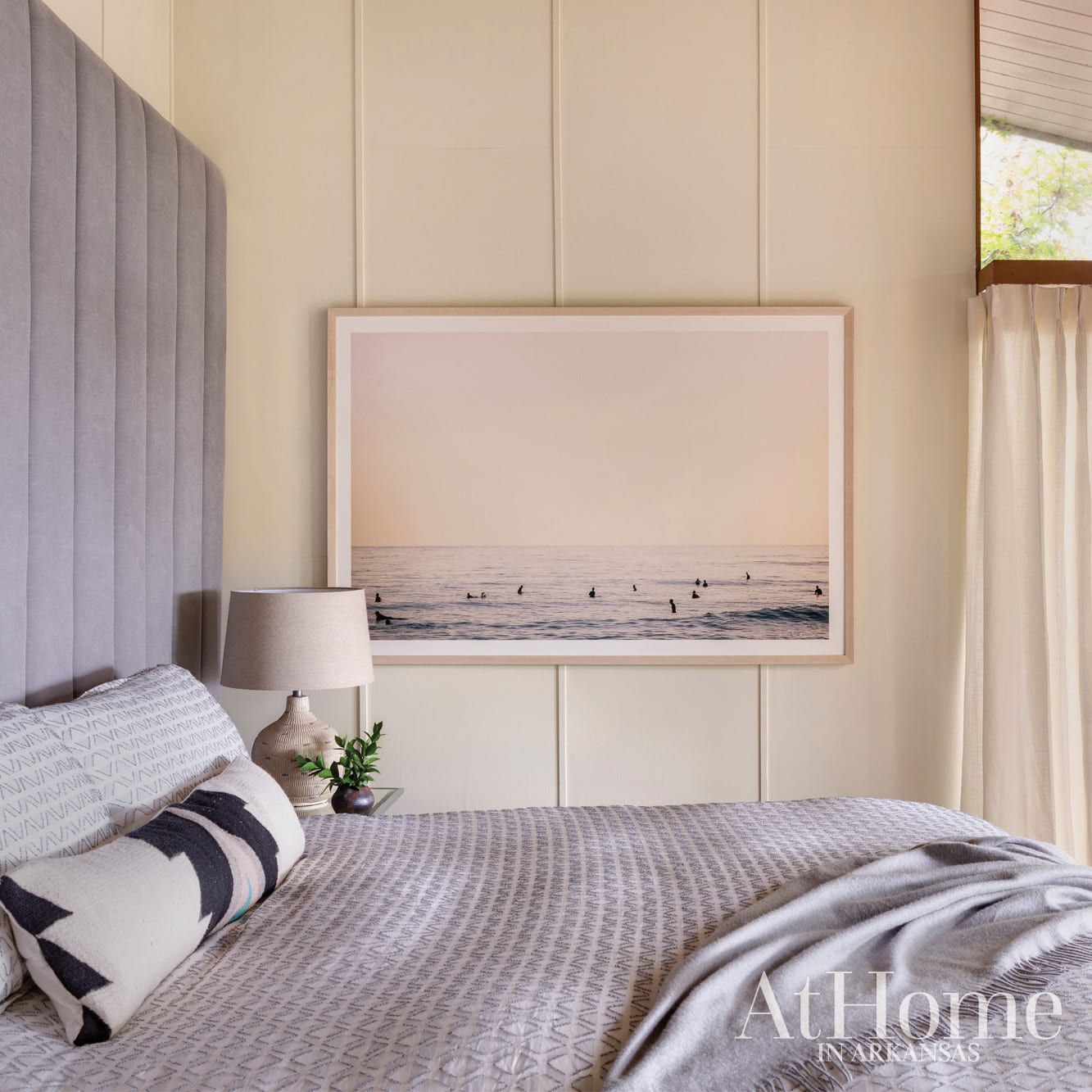 A framed print by Max Wanger reiterates the West Coast influence seen throughout the home and plays off the lavender tones of the master bedroom. 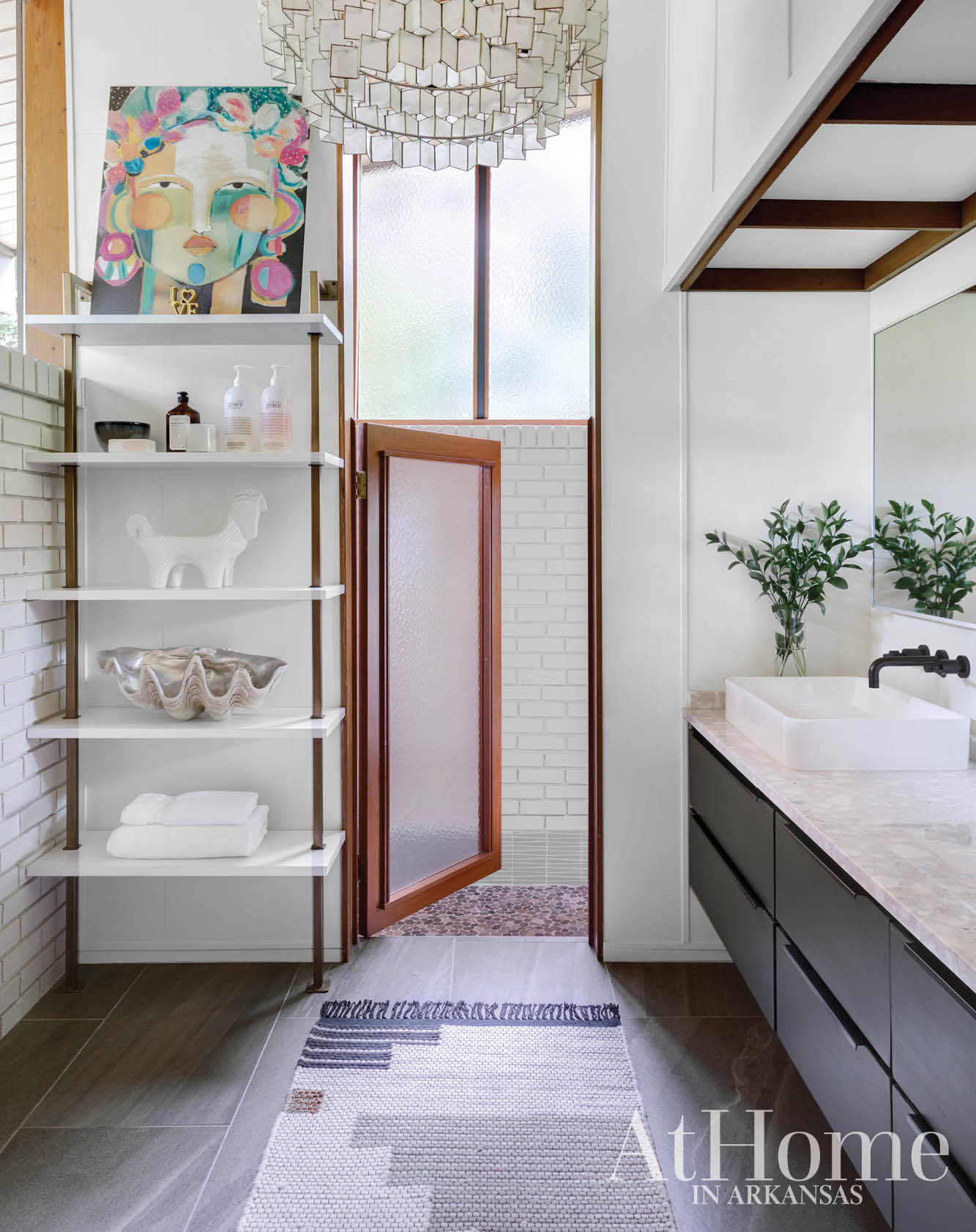 Master Updates
The home’s four bedrooms can be accessed from a single hallway running the length of the north wing of the house. Justine used lavender tones and an upholstered bed to bring softness to the master bedroom, and the master bath received one of the biggest overhauls of the whole house—new vanities. “One thing we realized when we bought the house was how small everything was in 1965,” Justine says. “The sinks were about 26 inches high! And they were pink, and the rest of the house was so masculine.” Floating cabinetry and marble countertops, plus the same oversized tile found in the kitchen, bring the bath up to date while making it more user friendly. 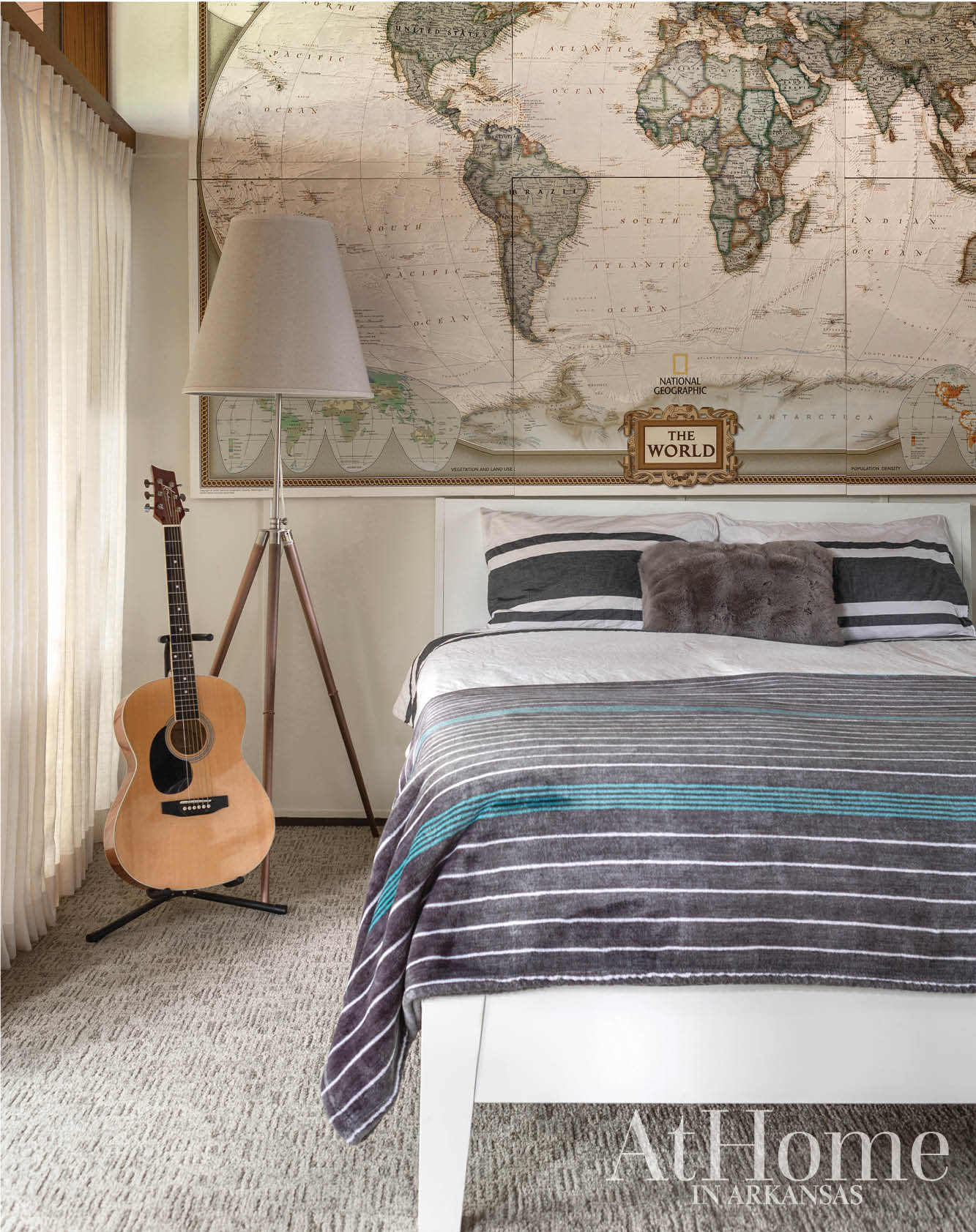 Click here to see before-and-after photos of this house 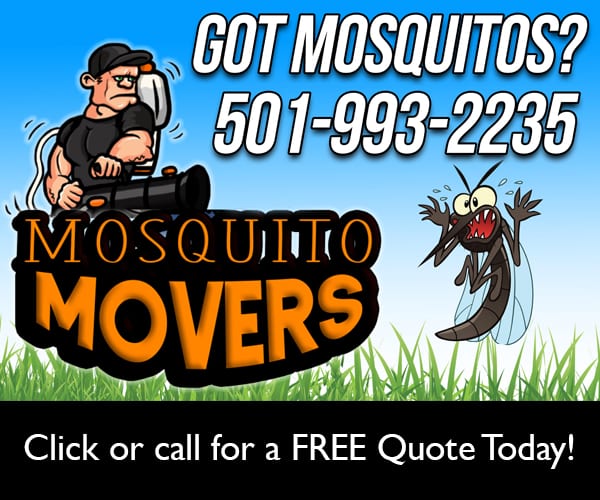