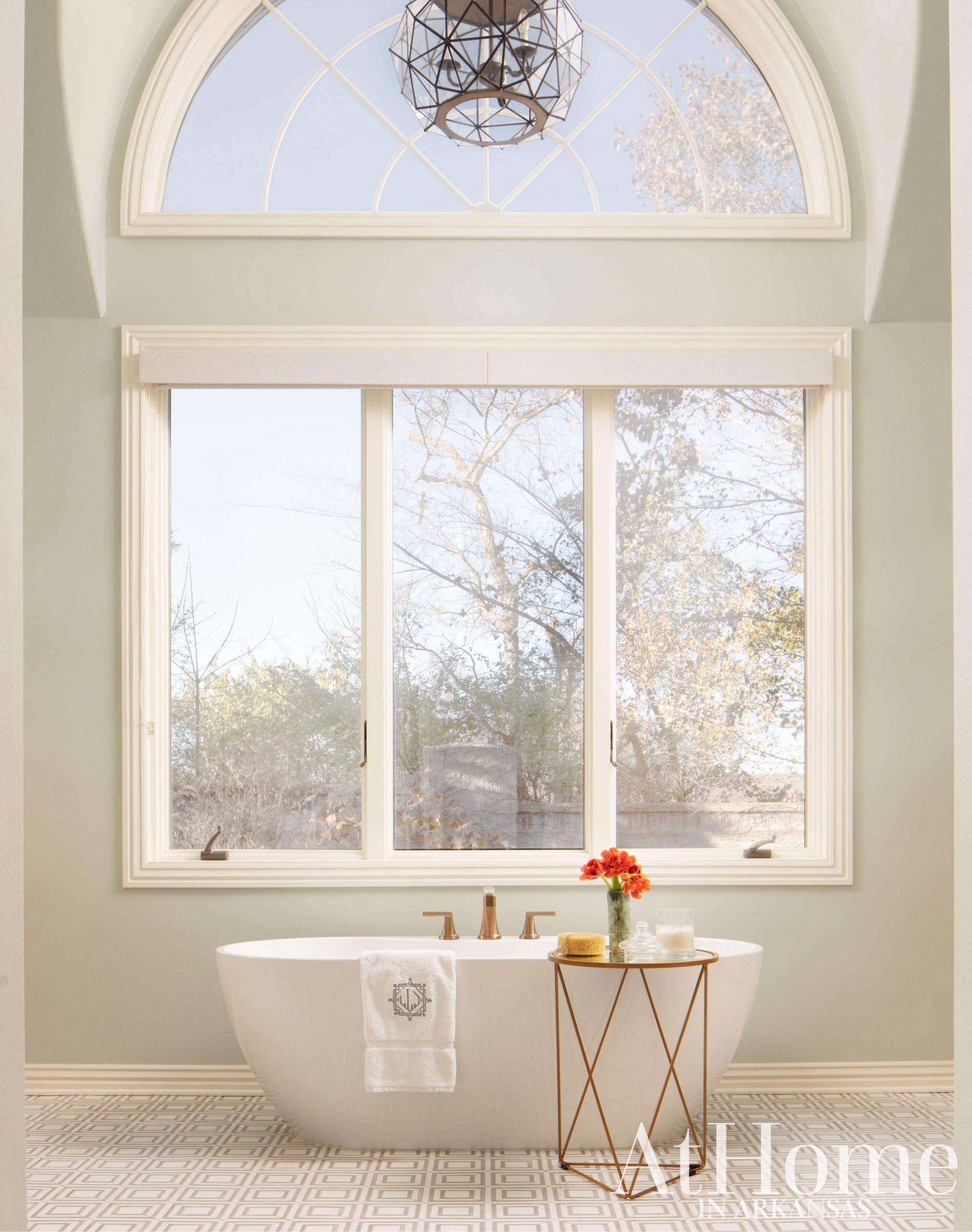 When Fayetteville-based designer Marie Jeffery’s good friends reached out to her to update their primary bed and bathroom, Marie focused first on function, considering how to improve upon the suite’s original design. “It was the funniest layout,” she recalls. “The bathroom is enormous, and the ceiling is really tall, so there was a lot of unused space.” 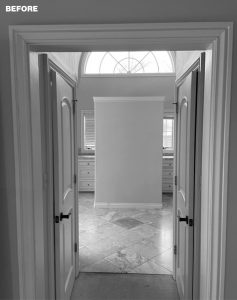 While no door separated the two rooms, an excess of closet entrances made the walkway between them cumbersome. Marie worked with a local architect to make the changes necessary to remedy the layout. “Once we knew that we wanted to put a door to the bedroom, we switched where the water closet was and put the wardrobe there,” she says.

She then removed a large shower concealed behind a partial wall in the center of the bathroom. This opened up the space both physically and visually, allowing natural light to stream in from a new three-paneled window. Now, a contemporary soaking tub stands in the place of the former shower, while a new and improved walk-in shower takes the place of the room’s original deck-style tub.

In terms of style, Marie aimed to prioritize the homeowners’ desire for a calming atmosphere while adding elements that would bring interest to the space. A geometric tile on the bathroom floor was selected as one such compromise. “It’s pretty busy, and the couple wanted the design to be minimal, so it was kind of a leap,” she says. The pattern underfoot is balanced with the room’s soothing green-blue hue and more understated tile selections in the shower. 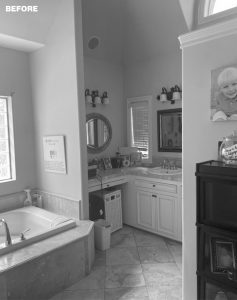 For the vanities, Marie designed custom white oak cabinetry featuring a diamond-shaped accent using two different stains. “The sconces on the mirror have a small diamond that connects them with the vanity,” she says. “And the hardware has a little bit of the feminine. The handles are mother-of-pearl, and they’re just super fun.” Curved mirrors and white Dekton countertops play into the modern leanings of the design.

Marie and her clients wanted to carry the same calming aesthetic established in the bath to the bedroom, while also keeping practicality front of mind. To that end, worn beige carpet was replaced with dark hardwood floors for better durability. “They have dogs, so it has to be clean,” she says. She also replaced their bed with a streamlined, four-poster style, yet opted to keep the barley twist wooden bedside tables the couple have had since they first got married. New draperies in a muted pattern finish the space. “It’s not overwhelming, and it’s subtle yet dramatic,” she says of the end result. “It just feels like a place you want to be.” 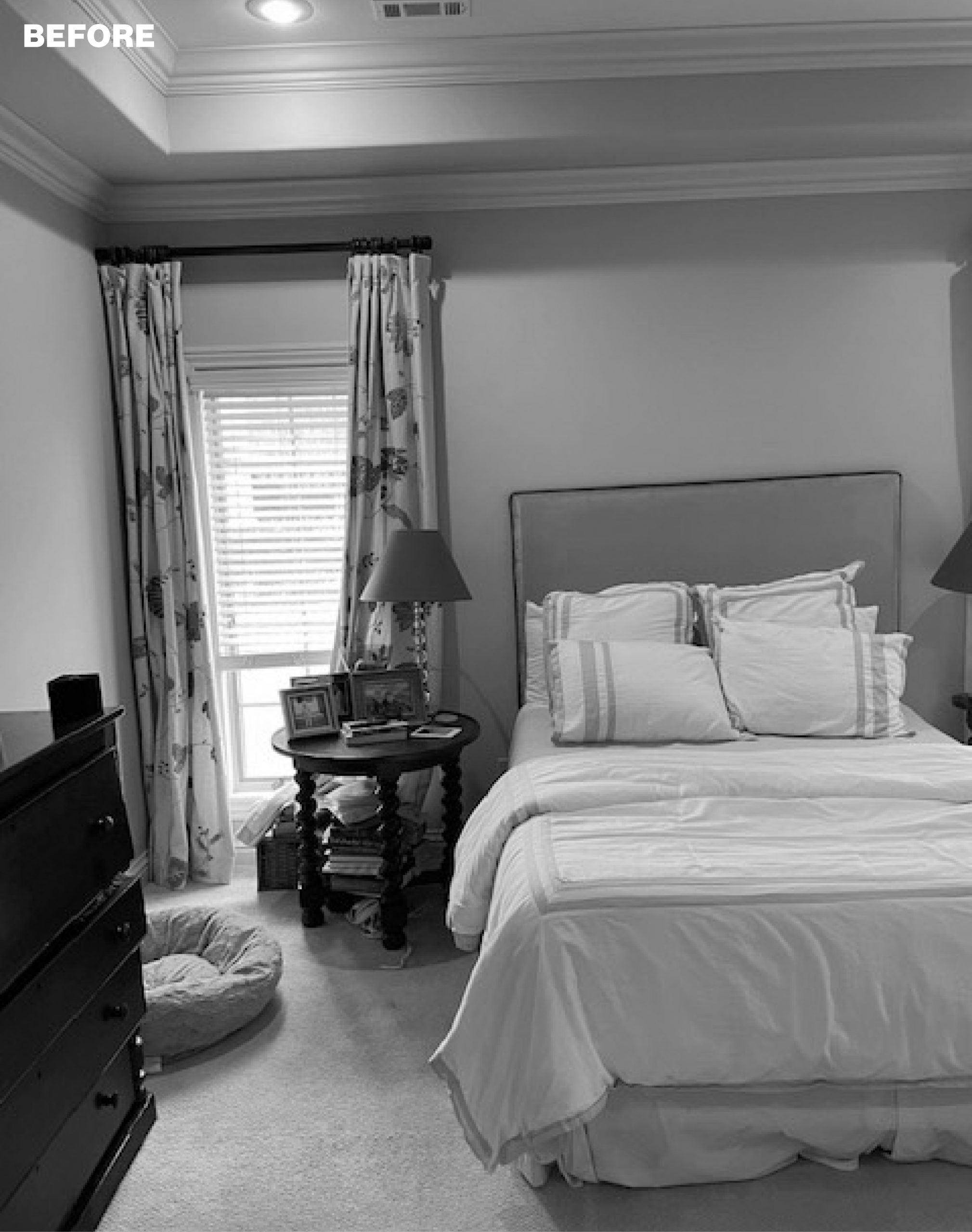 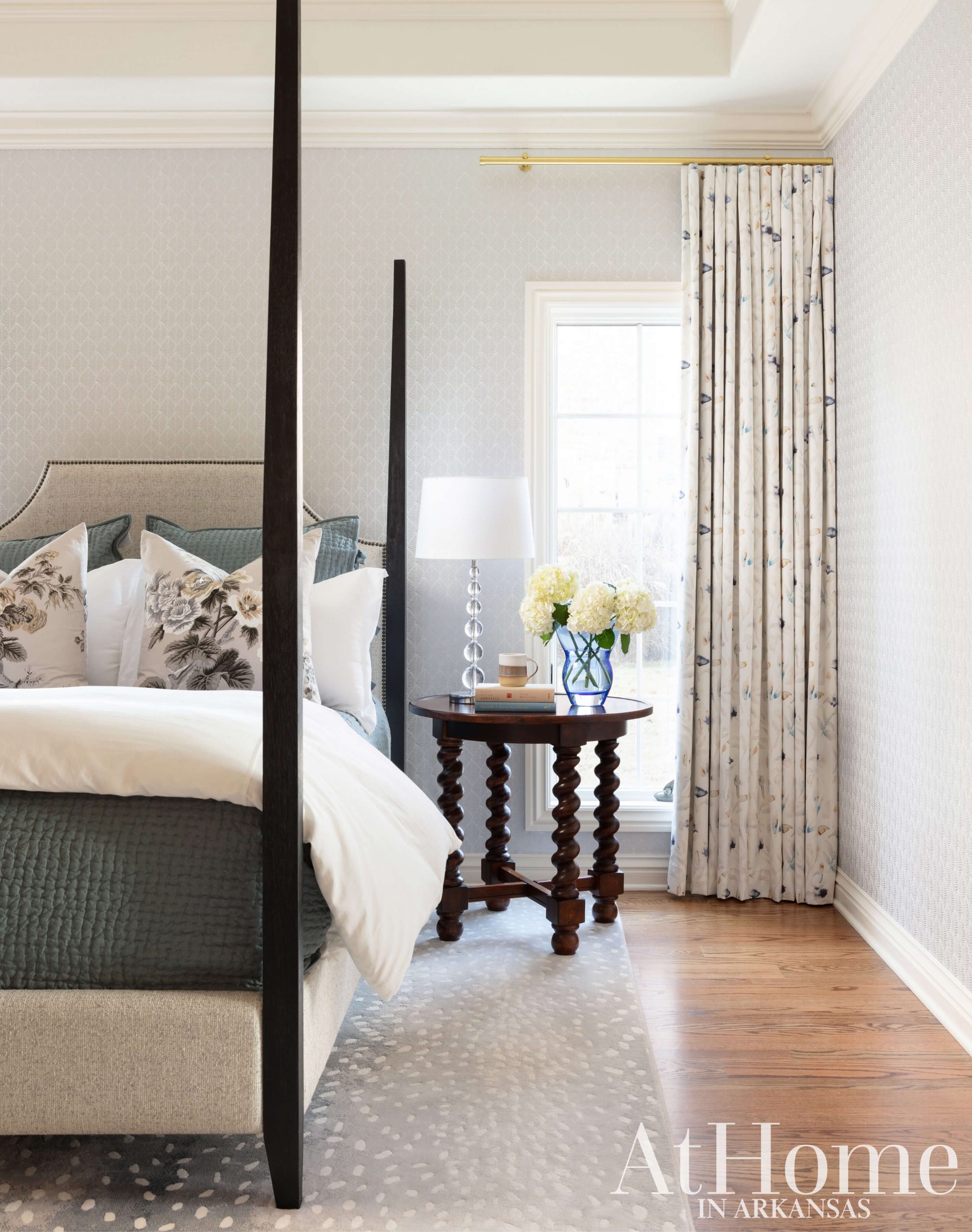 ALL TIED TOGETHER
The cool tones of the room’s new wallpaper, bedding, rug, and draperies make the mix of patterns featured feel cohesive. New shades update existing lamps with a fresh look. 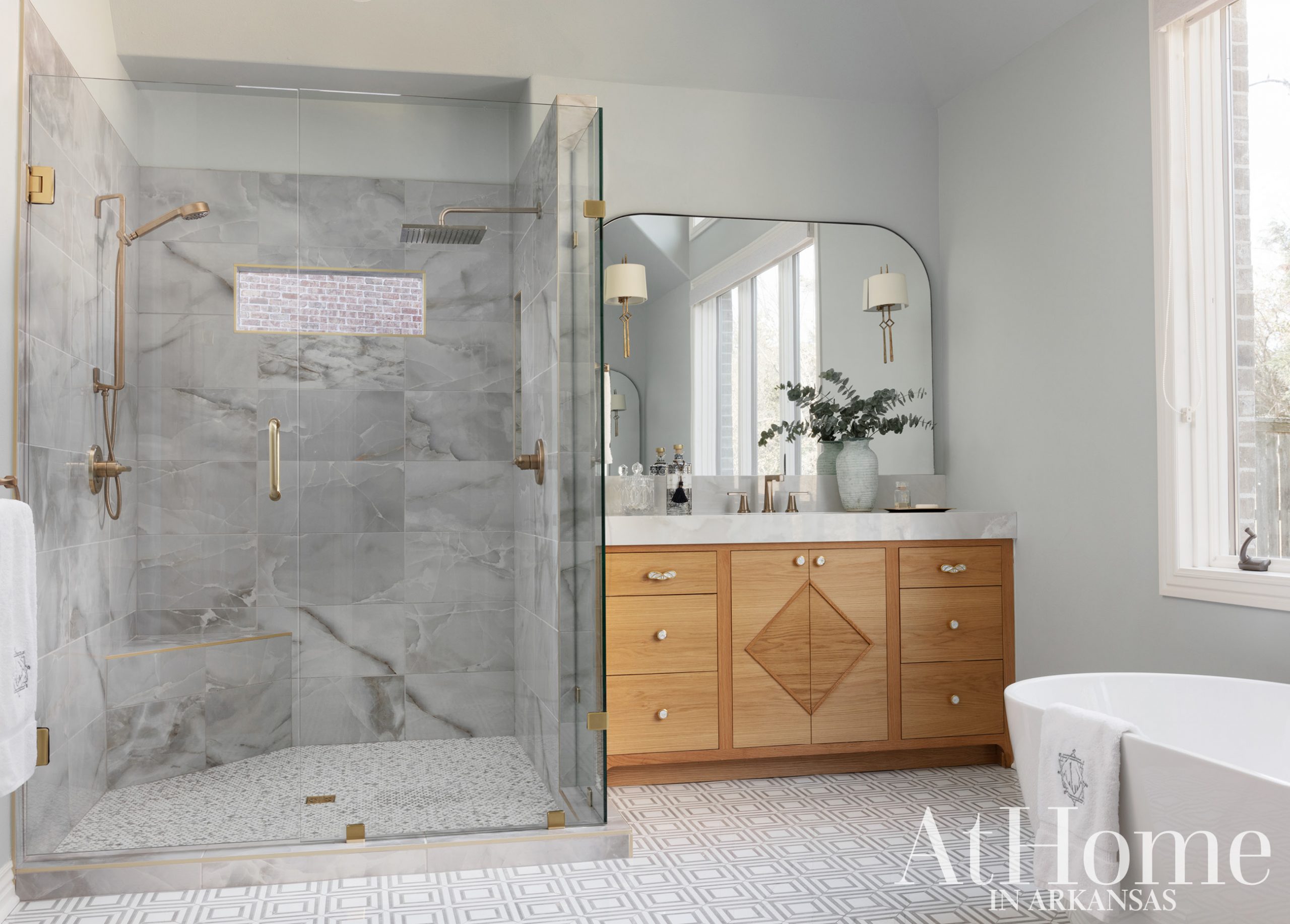 “It looks like this is how it always should have been.”
—Marie Jeffery, designer 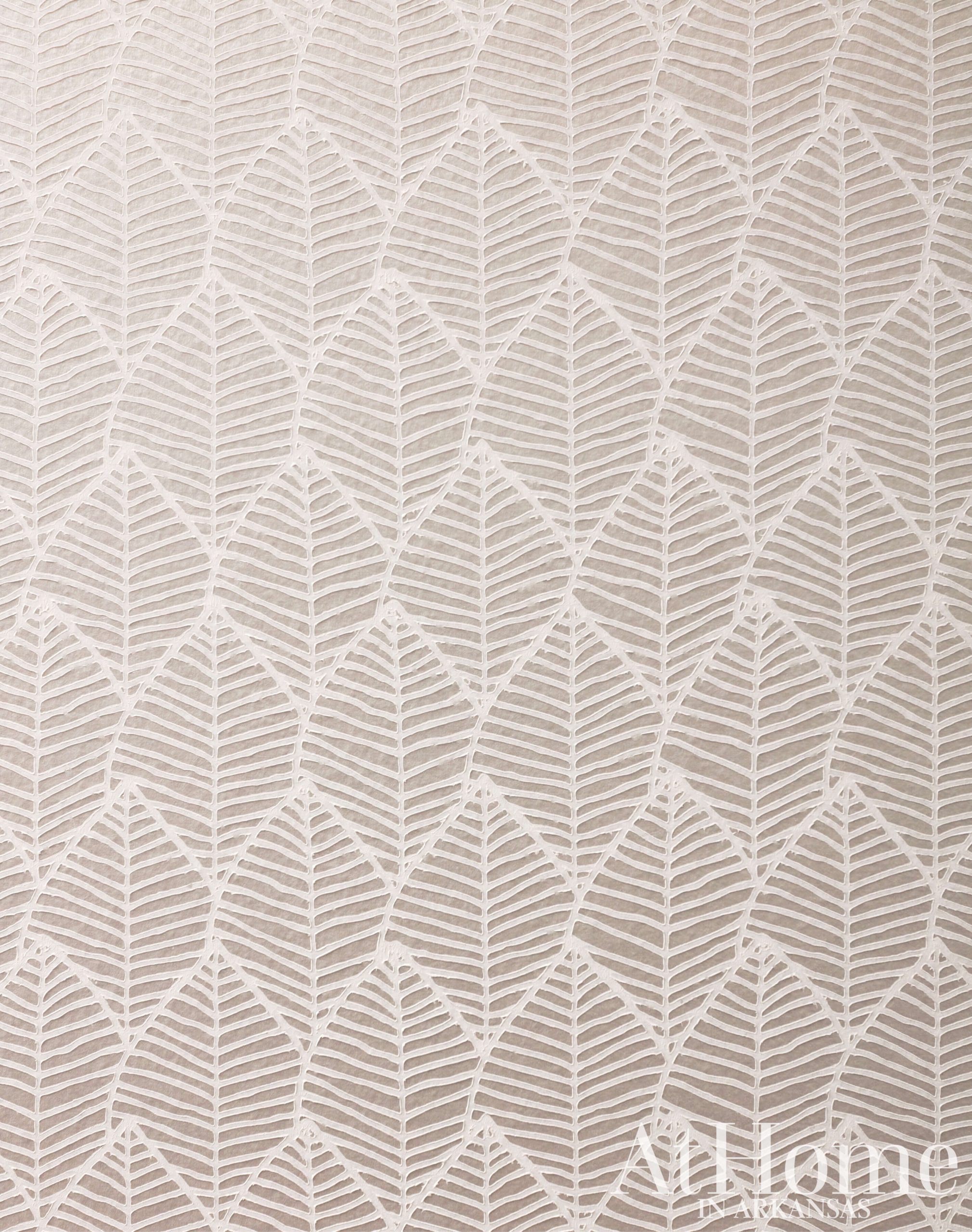 SUBTLE TEXTURE
Marie chose a metallic leaf-patterned wallpaper (“Meditation Leaf” by York) to bring a hint of glimmer to the bedroom. “It has a little bling and personality, but it also fades into the room,” she says. 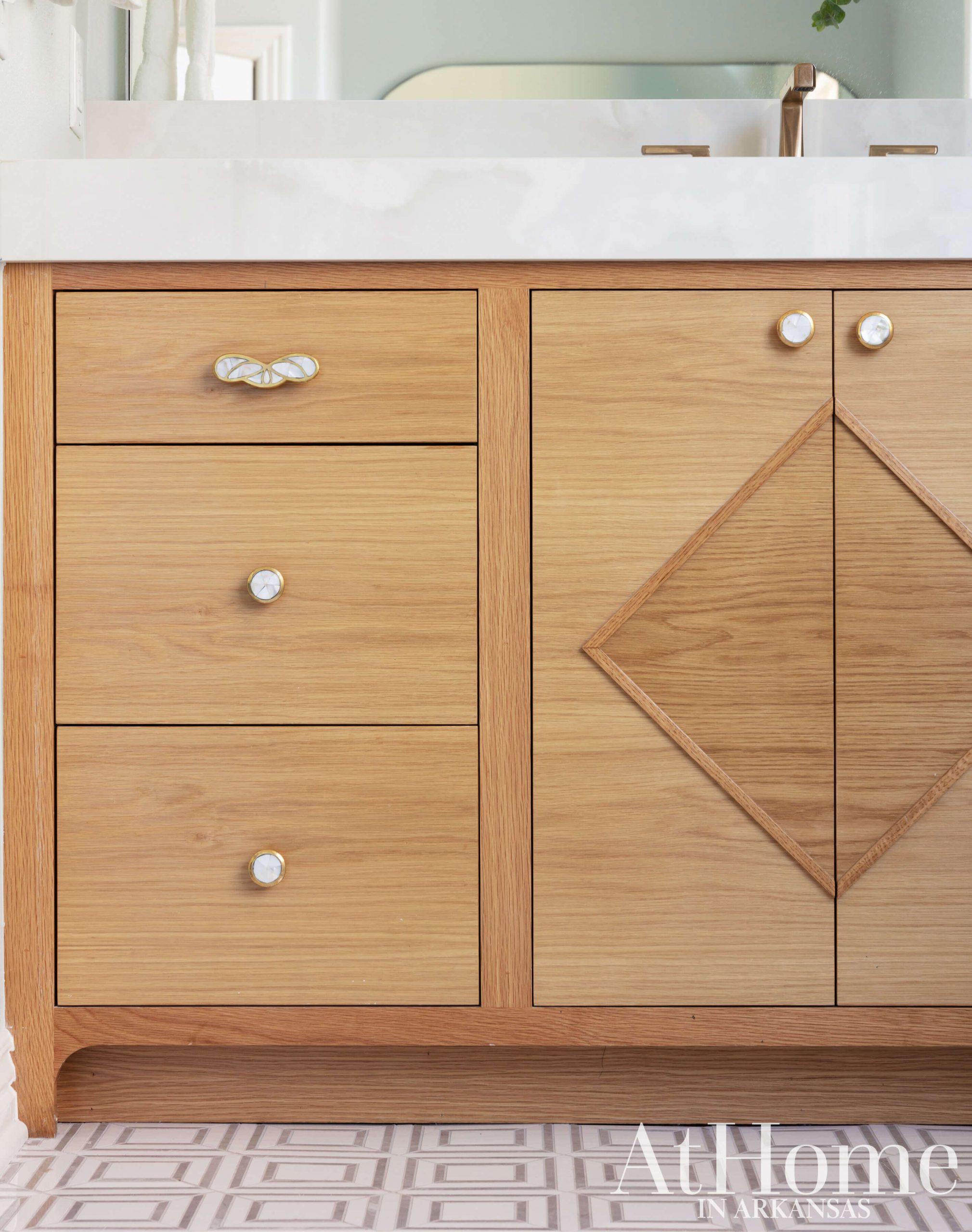 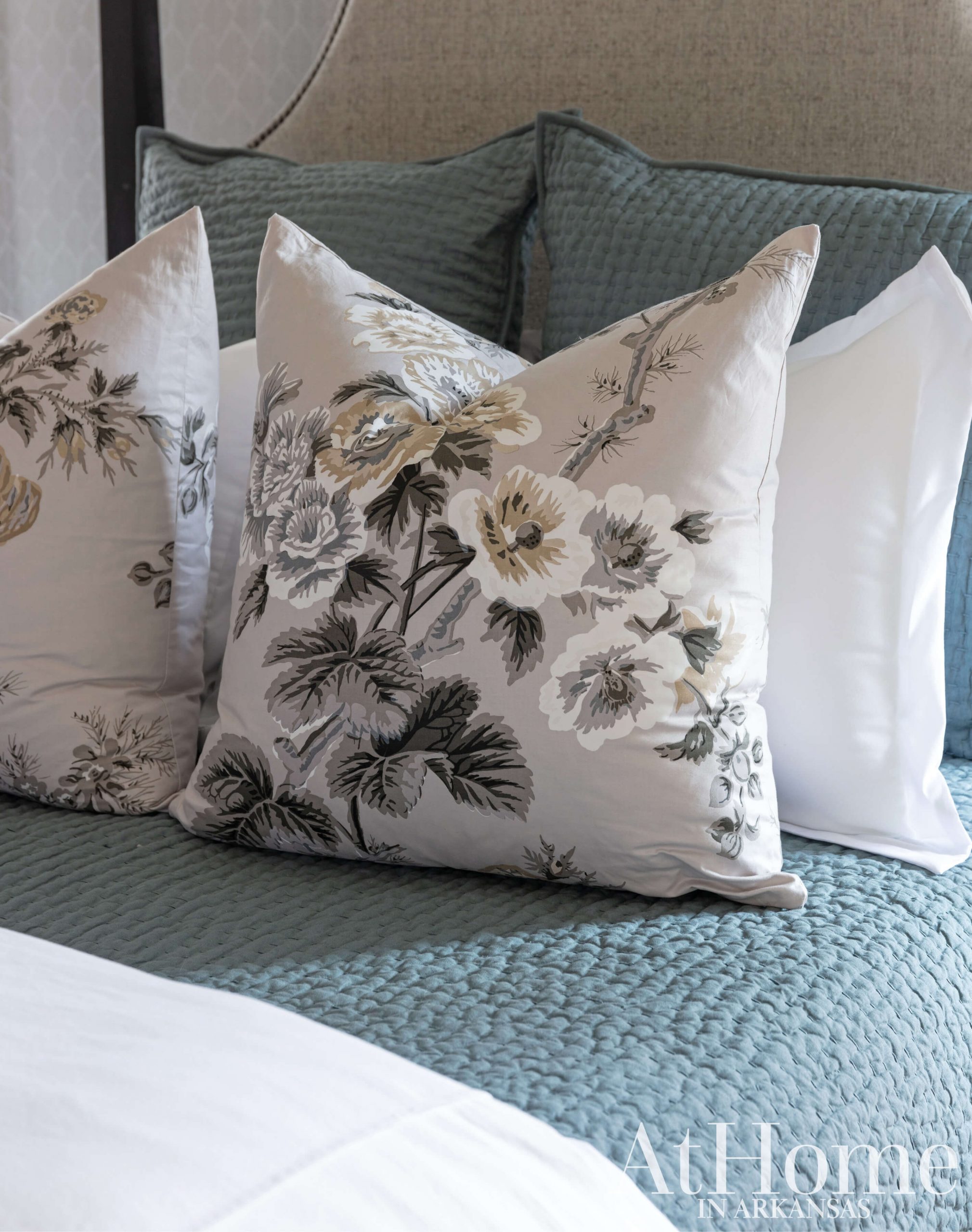 FEMININE TOUCH
Floral-patterned pillows counter the modern feel of the bathroom while drawing from the cool hues found throughout both rooms, helping the project as a whole feel connected. 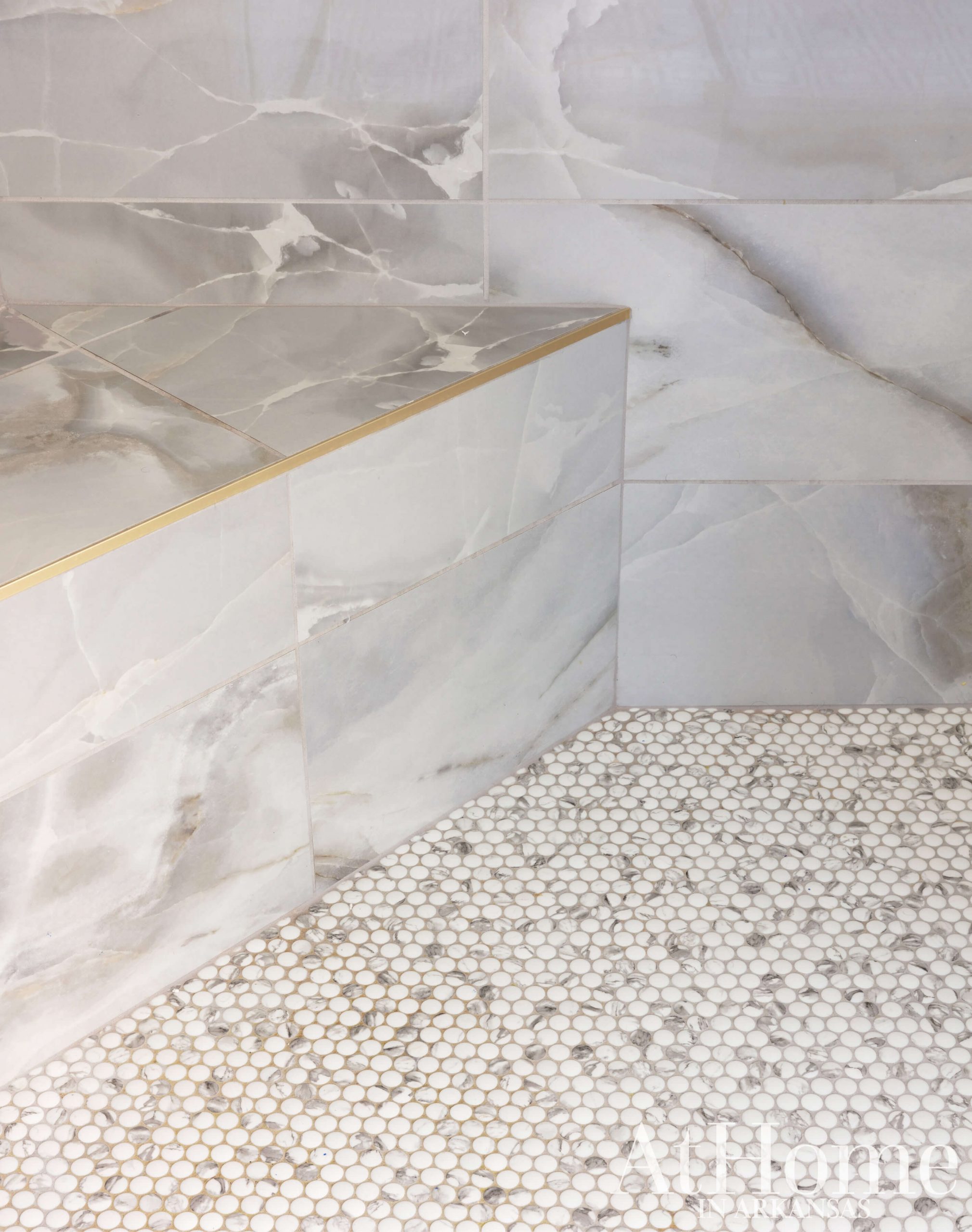 PLAYFUL PATTERN
In the shower, a blend of marble tiles on the walls and penny tiles on the floor create a spa-inspired feel. “It all works perfectly together, and it’s a bit of pattern play,” Marie says.