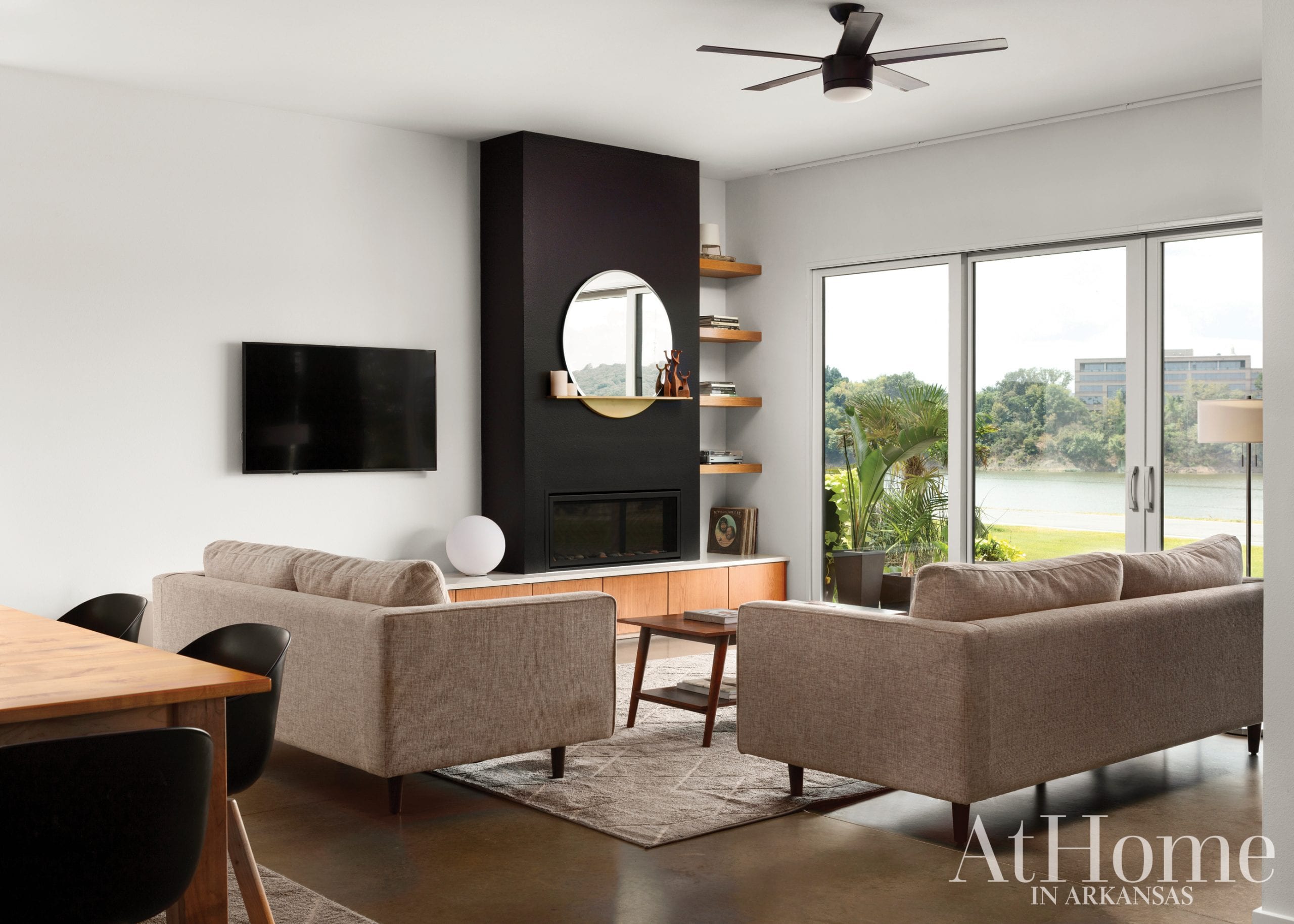 Every architect has their architect story,” Adam Day says when asked what first drew his interest to the subject. “I was in ninth grade geometry class, and my teacher had us design our dream house. We had to draw it out using grid paper and build a model, and it was due the Friday before spring break. I went to him and said, ‘I’m really enjoying this, can I spend more time on it over spring break and present it when I get back?’” Upon his return to school, Adam delivered an impressive 3D model made of museum board, a profound contrast with his classmates’ popsicle stick creations.

Several decades later, Adam is living out his childhood dream as a partner at Little Rock’s AMR Architects while residing in one of his own designs with his wife, Amanda, and their 2-year-old, Eleanor. After several years in the Capital City, he and Amanda decided to build new with the help of Summerwood Homes in North Little Rock’s riverside Rockwater Village. “When we lived in midtown, we would load up our bikes and head to the Big Dam Bridge and ride the trail over to this side of the river,” Amanda says. “We saw the neighborhood getting built up and knew we would love being right here on the trail. It’s important to me that our daughter grows up spending time outside, and there’s no better place for us to have that kind of access.” 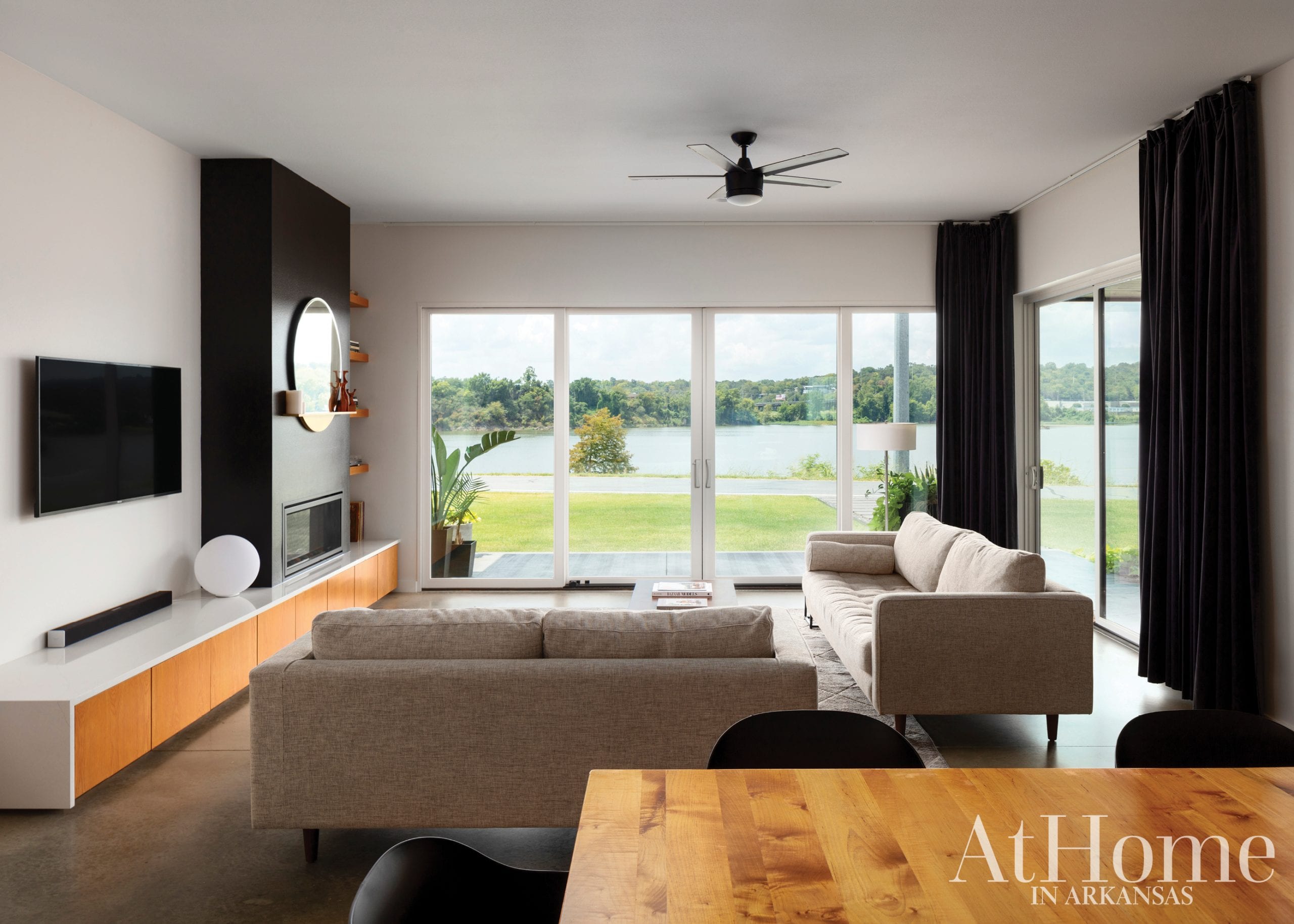 Consequently, when they started planning the house, the focus of the view outdoors was of prime importance. “The sight overlooking the river is too good to ignore, and that was really the start of the design,” Adam says. He worked through several iterations before arriving at the home’s final form; along the way, each version—including the final design—incorporated as much glass as possible to take advantage of the views and filter in natural light. Once they were in the construction phase, the Days kept the finishes and furnishings streamlined to complement the home’s contemporary style. “Part of modern design is stripping away unnecessary ornamentation, and while there’s some design theory with that for minimalism and contemporary homes, I don’t think it’s a purposeful thing for us; we just don’t like a lot of clutter,” Adam says. “Having clean, functional spaces is something we both strive for.” 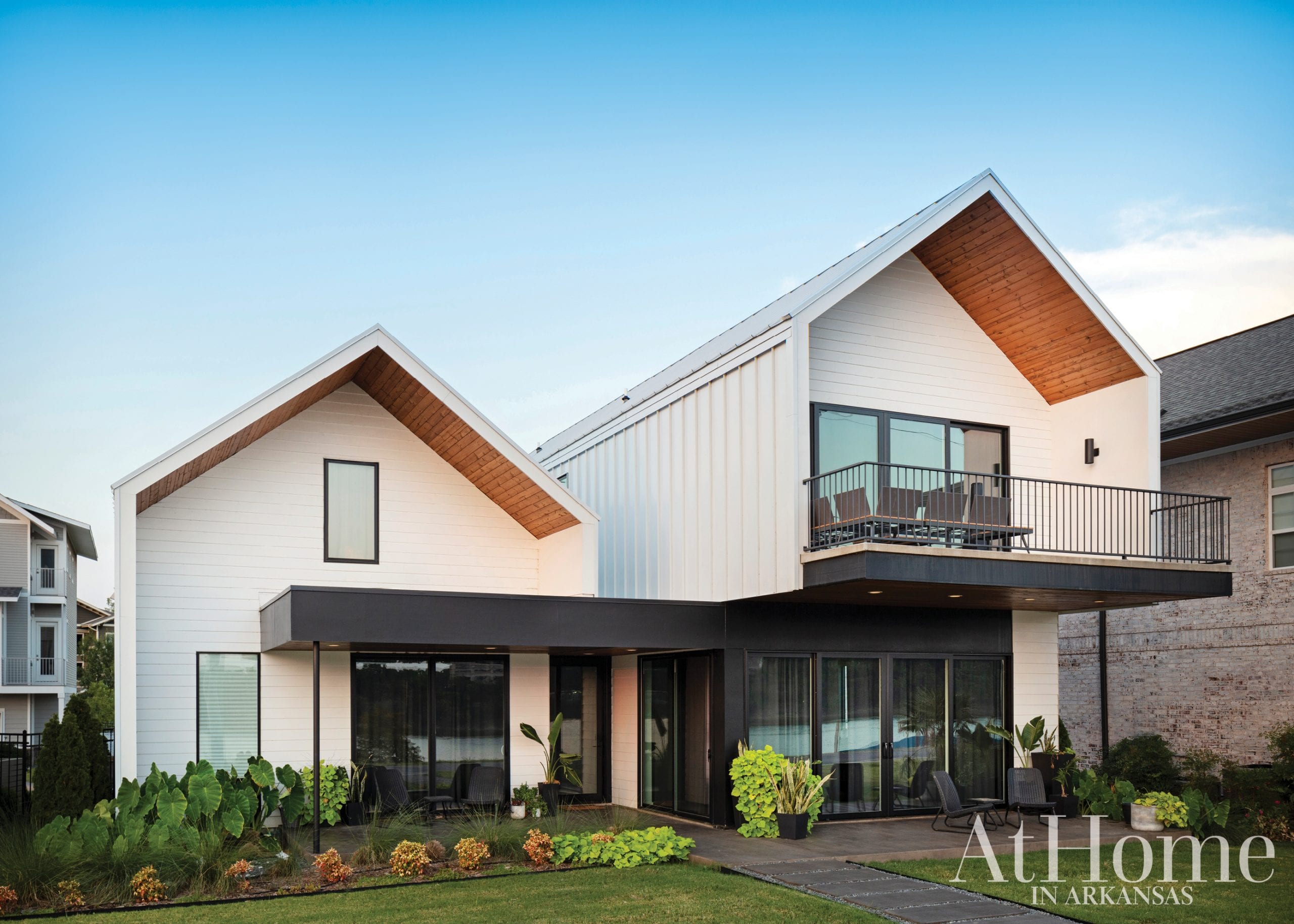 Traditional Influence
Adam’s primary challenge was fusing his contemporary approach with the neighborhood’s architectural standards, which are informed by traditional Southern styles. The final design is what Adam dubs a “double barrel trot gun;” a central hallway connects two wings, much like a dogtrot house, while each wing resembles a shotgun-style home. “You don’t get more traditional or Southern than that,” he says. 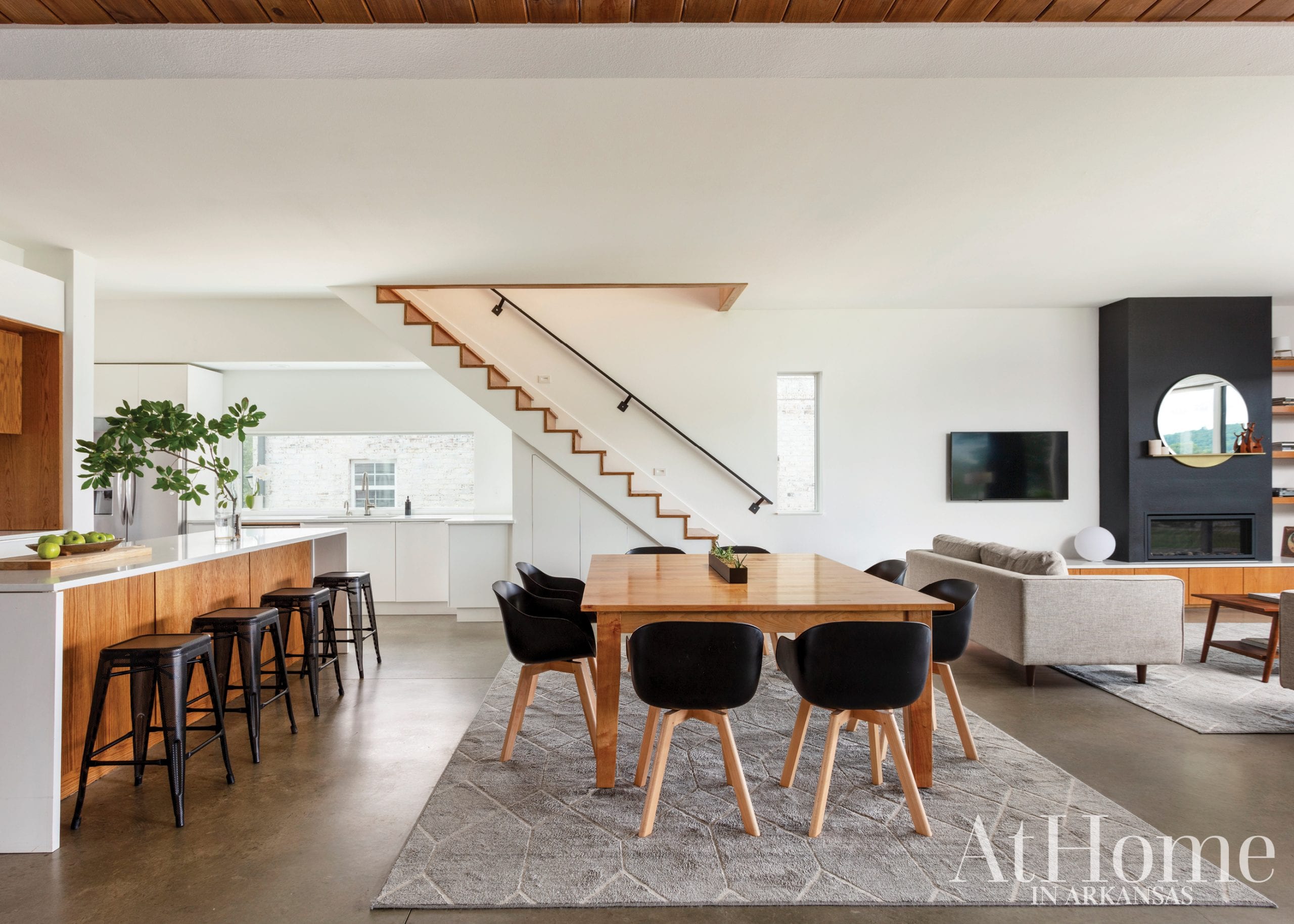 Balancing Act
Adam and Amanda were intentional about creating an inviting, welcoming air while also keeping everything streamlined. The warm wood tone seen on the home’s exterior carries into the house, where it plays a key role in offsetting the white walls and concrete floors downstairs. Plush area rugs define each zone, and black accents help move the eye throughout the open floor plan. 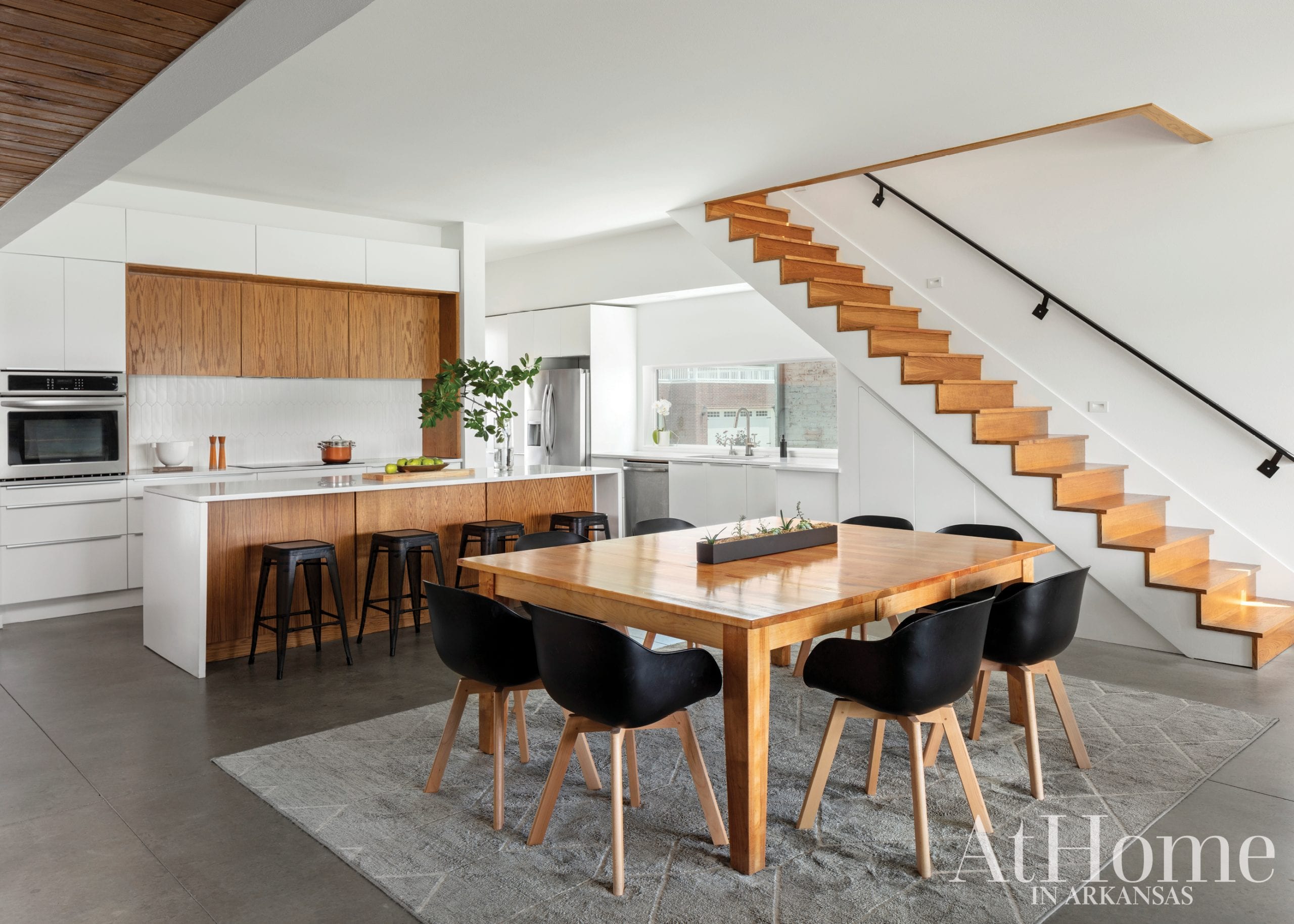 The staircase was inspired by the home of the late architect Luis Barragán, which Adam toured while studying abroad in Mexico City. 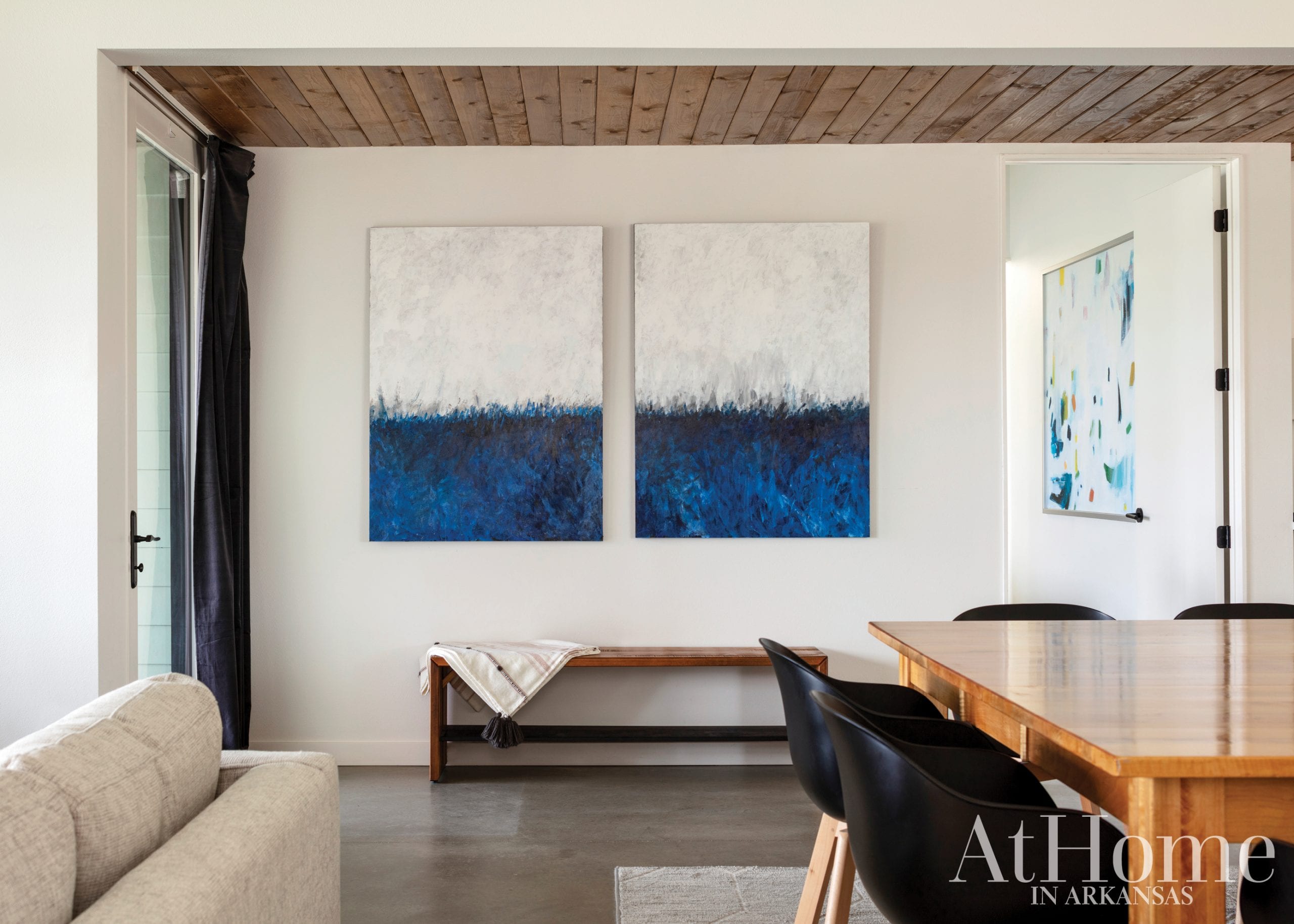 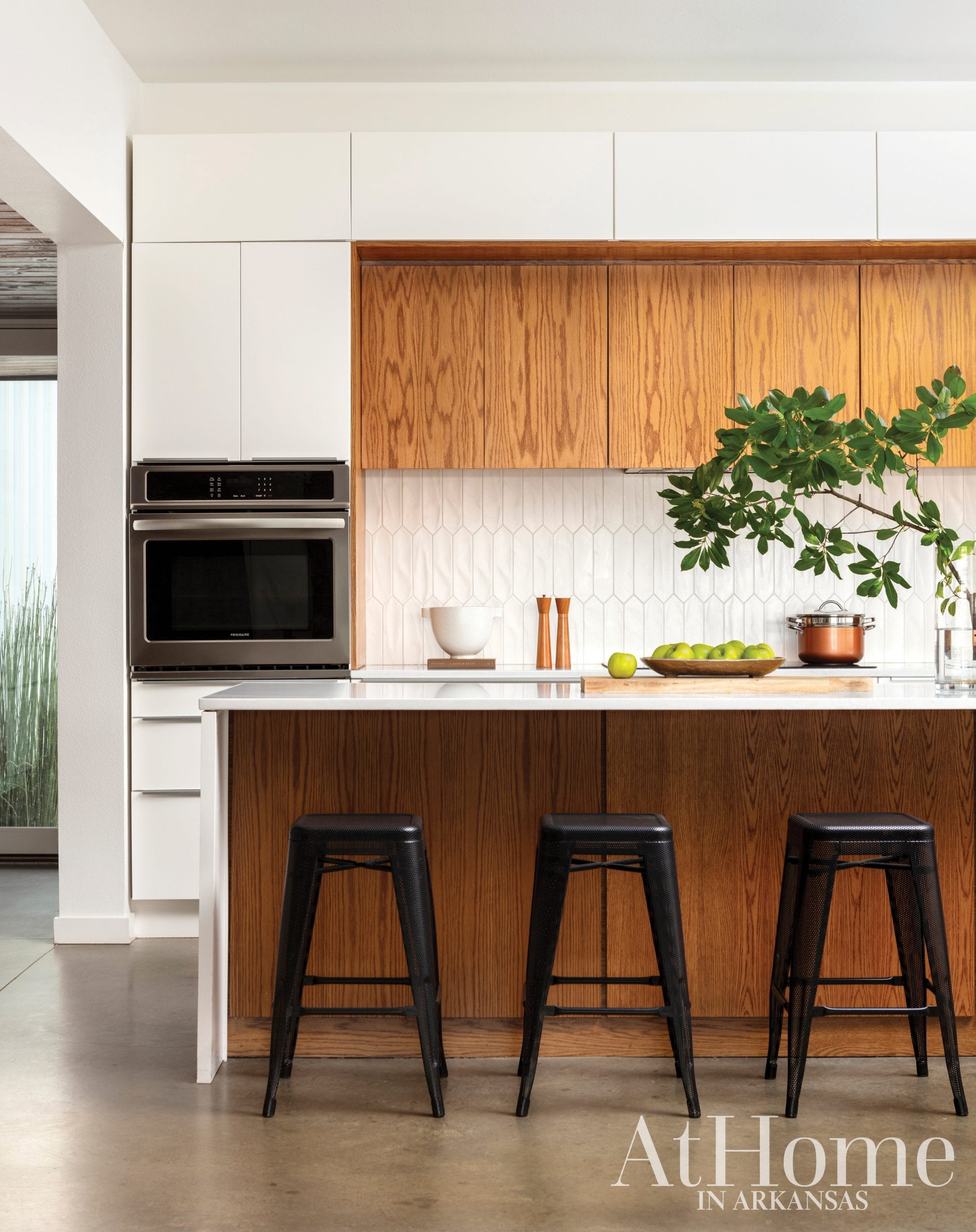 Thoughtful Planning
In the kitchen, the Days employed a mix of low-cost Ikea and custom white oak cabinetry to create an eye-catching, hard-working space that was also cost-effective. “It took a little longer to figure out, but it provides those clean lines and allowed us to spend money elsewhere,” Amanda says. The vent hood is incorporated seamlessly into the upper cabinets while a geometric, textured tile adds subtle interest to the backsplash. 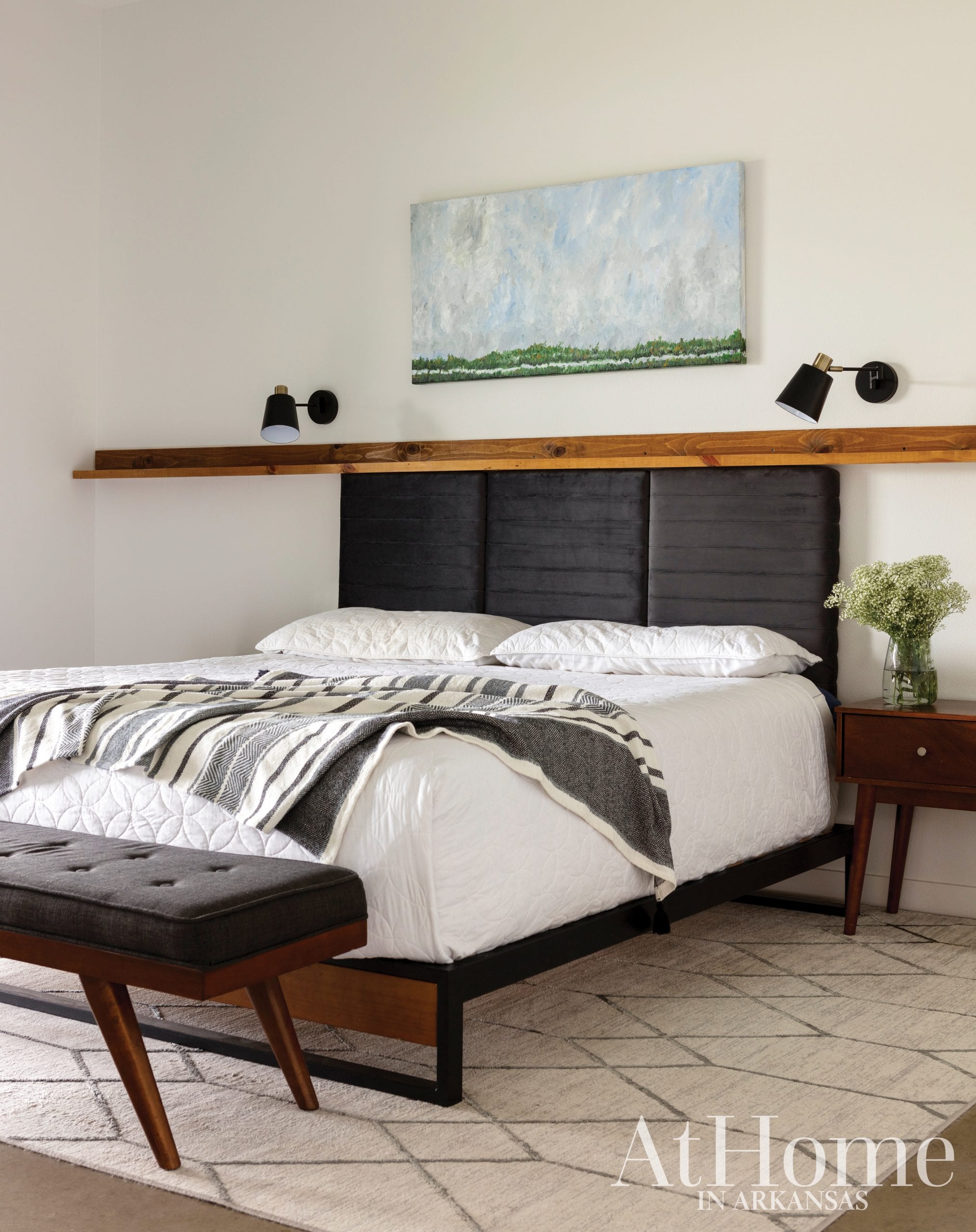 In the master bedroom, leftover pine from the ceilings and home’s exterior was used to make a shelf over the bed. Adam’s father, Dan, created the painting inspired by the view from the guest room upstairs. 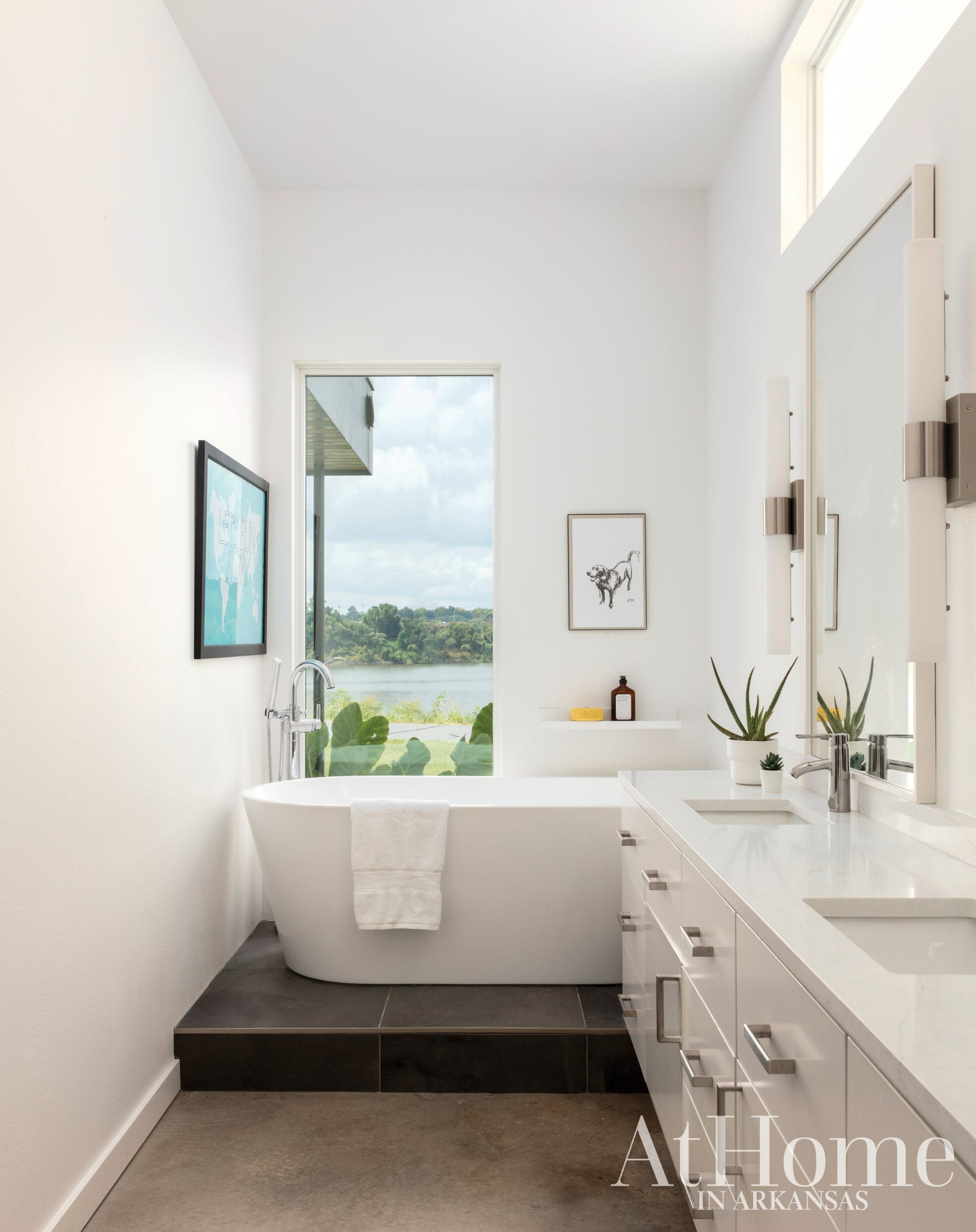 Sleek Retreat
The master bath mimics the home’s overall shotgun-style construction, with the tub in the front and shower in the rear near a walk-in closet. Adam was mindful to place this room on an exterior wall where an abundance of natural light can fill the space through windows at varying heights. Chrome finishes add polish to the space.