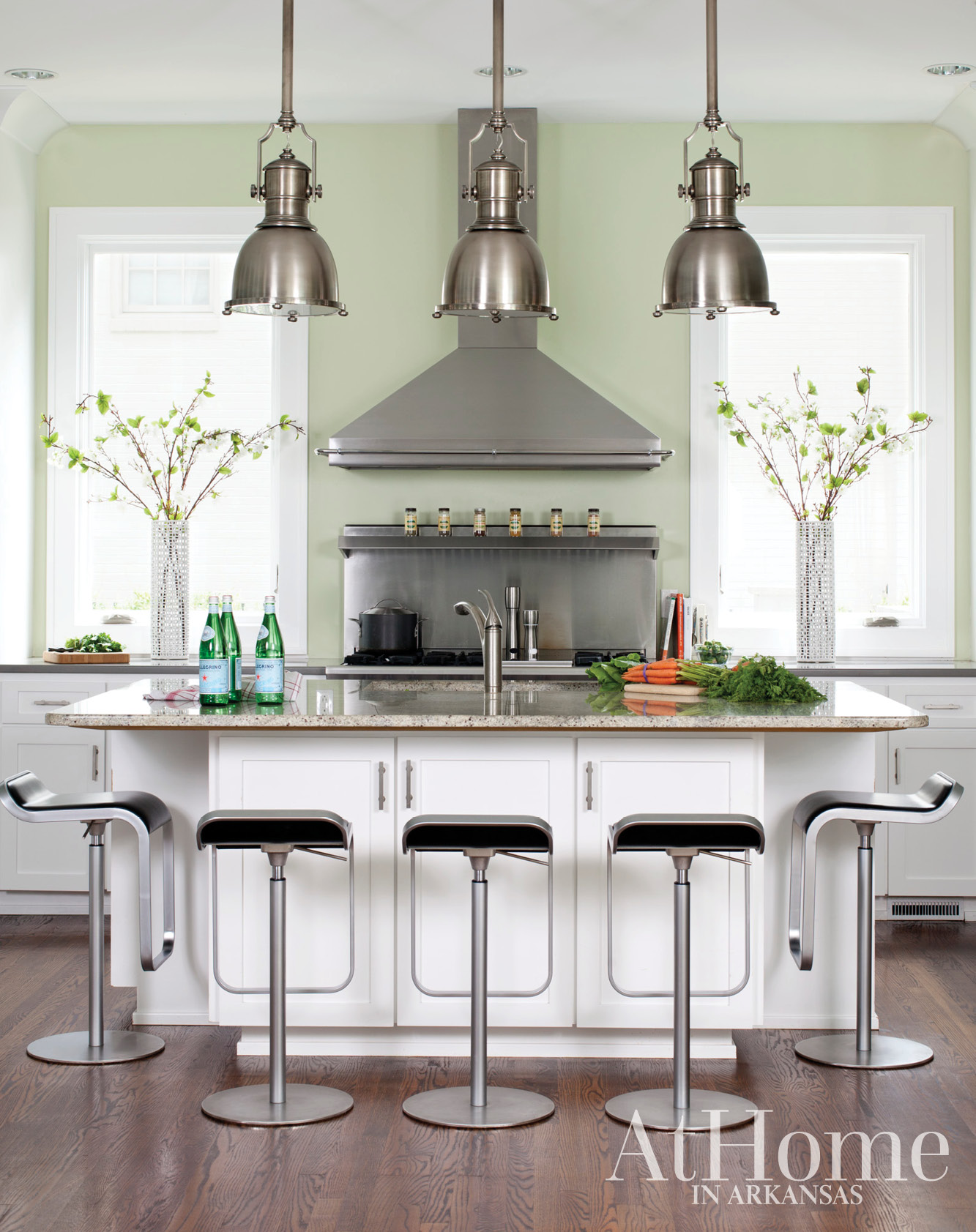 At Home in Arkansas: This kitchen and bathroom seem so organized and efficient, and those big windows make the areas extra bright. What were the rooms like before you began the renovation?
Scott Paterek of Massimo: The opposite of that! It’s a 1980s house, and the rooms were more formal and closed off.
Rus Venable of Massimo: The open kitchen you see now was once three separate rooms: a cooking area, a breakfast room and a bathroom.

AHIA: Sounds like making the spaces less formal and more open were top priorities?
SP: Yes, the homeowners, Dr. Jake and Cheryl Jaquiss, have three kids, and they were looking for more casual rooms where the family could be together. They thought they would need to add on to the house to gain open space, but we were able to show them how we could work with the existing footprint and make it more functional.
RV: It’s a good question to consider before you add on—look at how you really live in your home and whether you can make better use of the space. We use a pretty specific computer program where we take the floor plan of a house and see if we can make it more efficient with a few changes. Here, we worked with the builder so that the structural support systems could stay in place while still revamping the flow of the rooms. 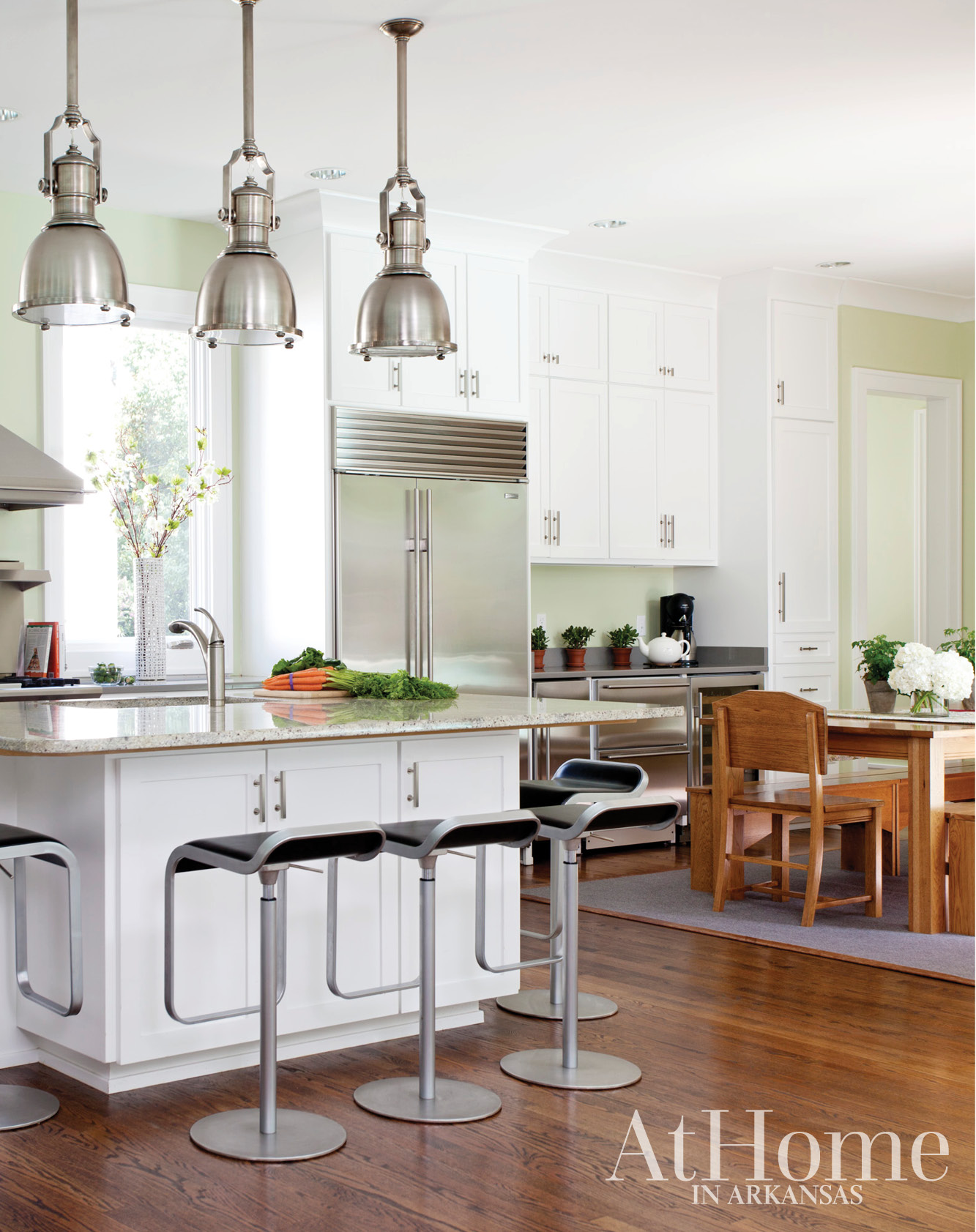 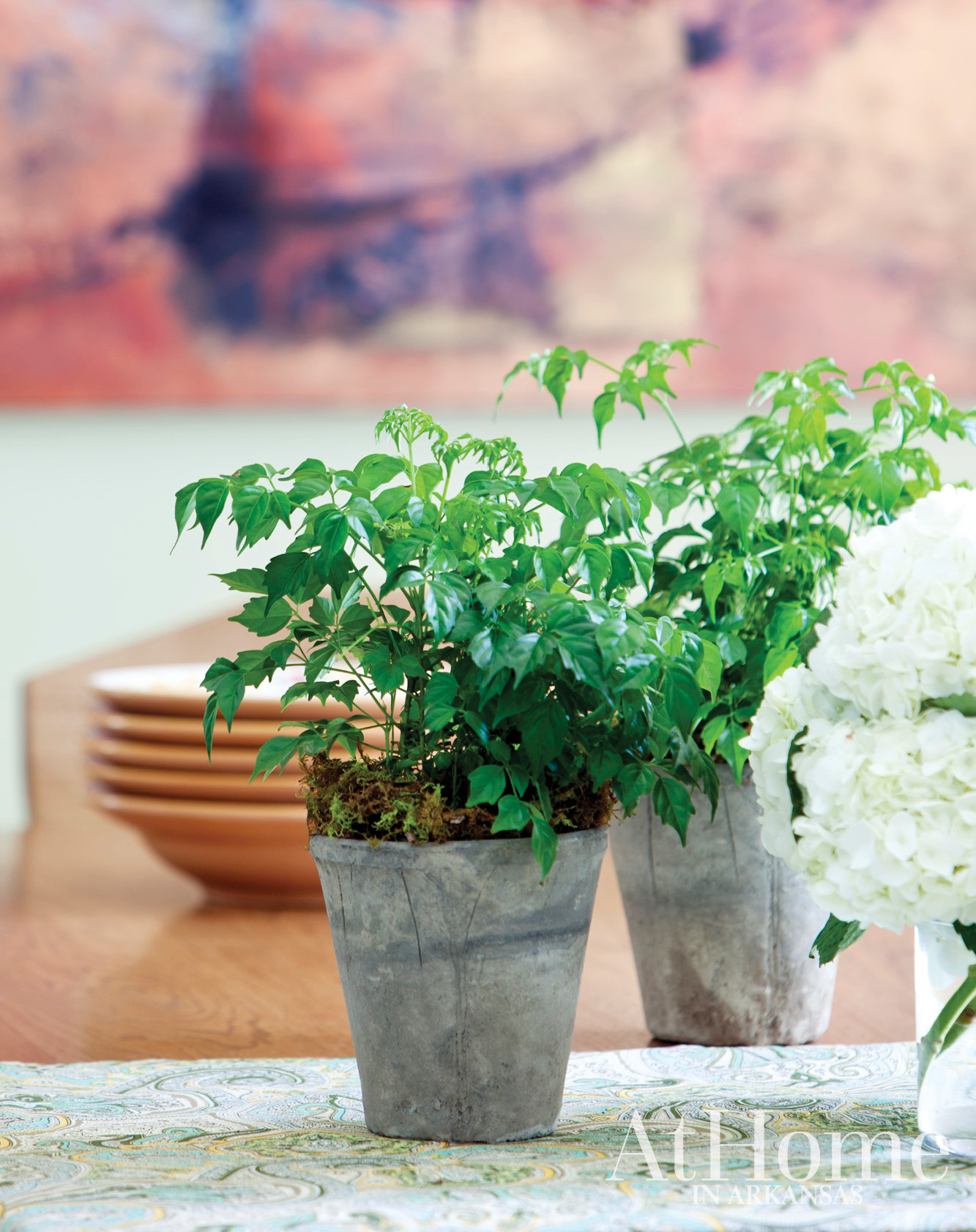 AHIA: Did the homeowners have other wish list items for the kitchen renovation?
RV: Cheryl is a great cook, and she wanted a space that’s easy to work in while the family is around. So we created zones within the open area. There’s a cooking zone around the range, a prep zone on the island, and a storage and serving zone alongside it. The breakfast room doubles as a beverage serving area, with a wine cooler, icemaker and refrigerated drawers for drinks.
SP: We made the island extra functional as well, building storage space into it and making it a gathering place by adding seating on three sides. It’s difficult to carry on a conversation if everyone is sitting on one end looking straight ahead. We made the island T-shaped, so bar stools fit on the sides and people can interact.

AHIA: What else did the homeowners have in mind?
RV: They definitely wanted rooms with more light, and we spent a lot of time making the window rhythm correct around the house. It lacked symmetry, and this is a very traditional house with white columns out front. Adding the pair of windows in the kitchen with the range in between gave the room a sense of order.
SP: Clean lines were also important, a more modern approach, and we went for a balance between the traditional look of the house and the simplicity they wanted. The breakfast table had been custom built for them for another house, and its style defined their look—simple lines, good materials. 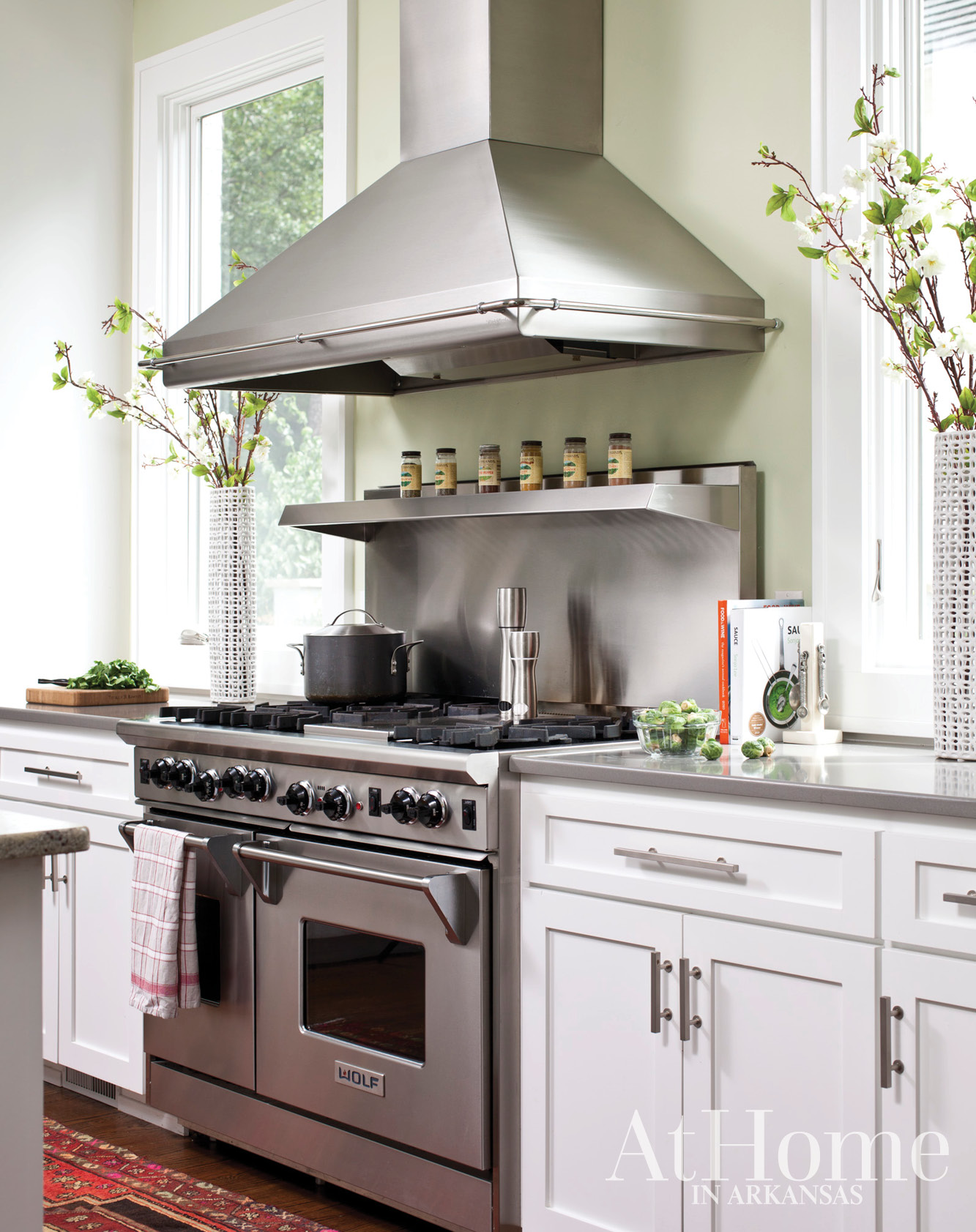 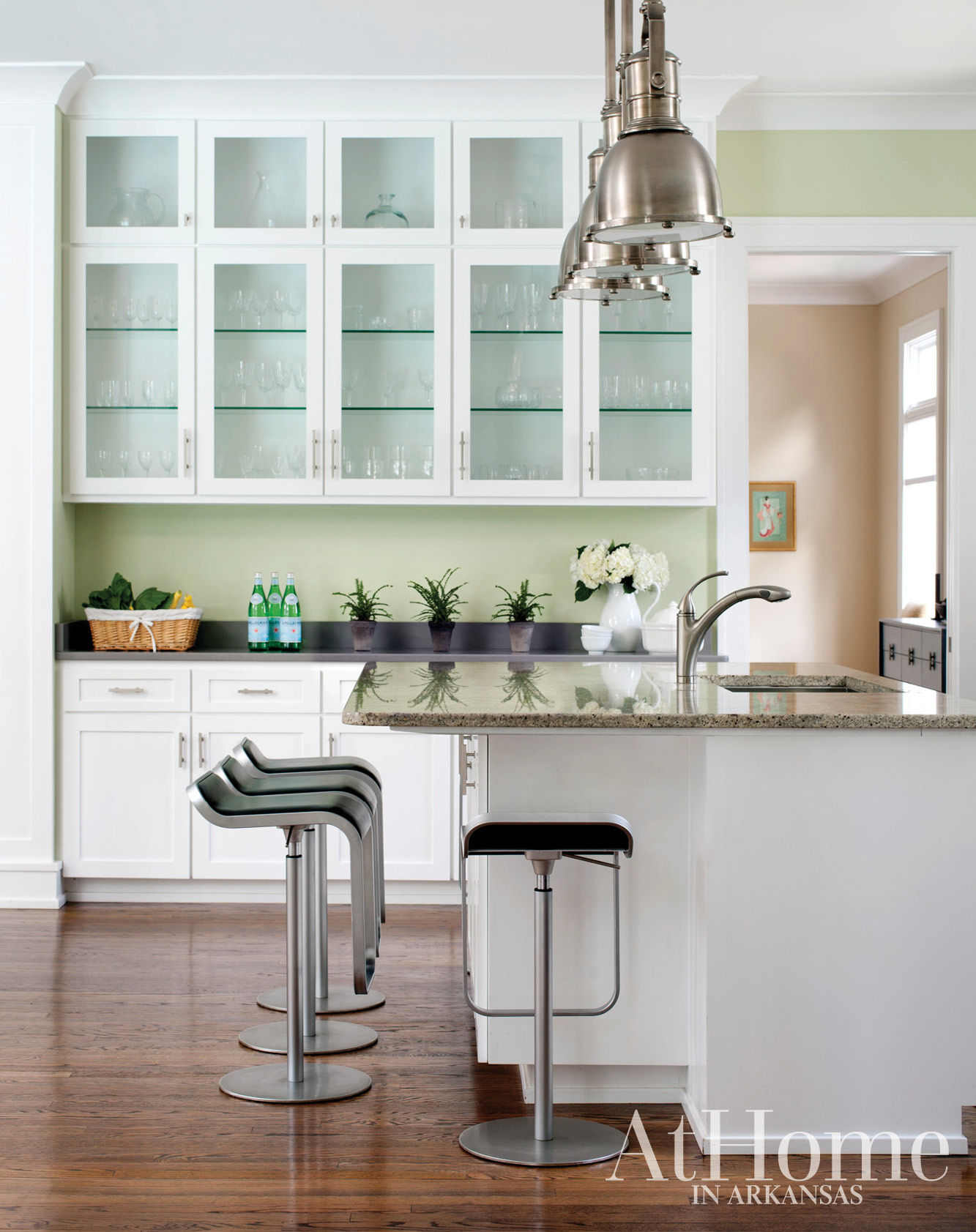 AHIA: So you used a transitional style, classic elements with a modern aesthetic. How did you carry that through your design?
RV: We chose a Mission-style door for the cabinetry in the kitchen and carried it through to the bathroom. The cabinet doors are flat paneled instead of no panel or overly ornate. We added crown molding, but it’s a curved, smooth line with no detail. Window and door trim is a simple flat band. The island is topped with more traditional granite but the surrounding counters are a more contemporary Caesarstone. The concept of simple yet traditional kept coming up.
SP: Our goal was that you would walk through the door and the look would still feel in keeping with the style of the house, that nothing would feel harsh or incongruent. That’s important for resale too. Right now, the Jaquisses are in the process of relocating out of state, so we’re glad we kept that goal in mind. 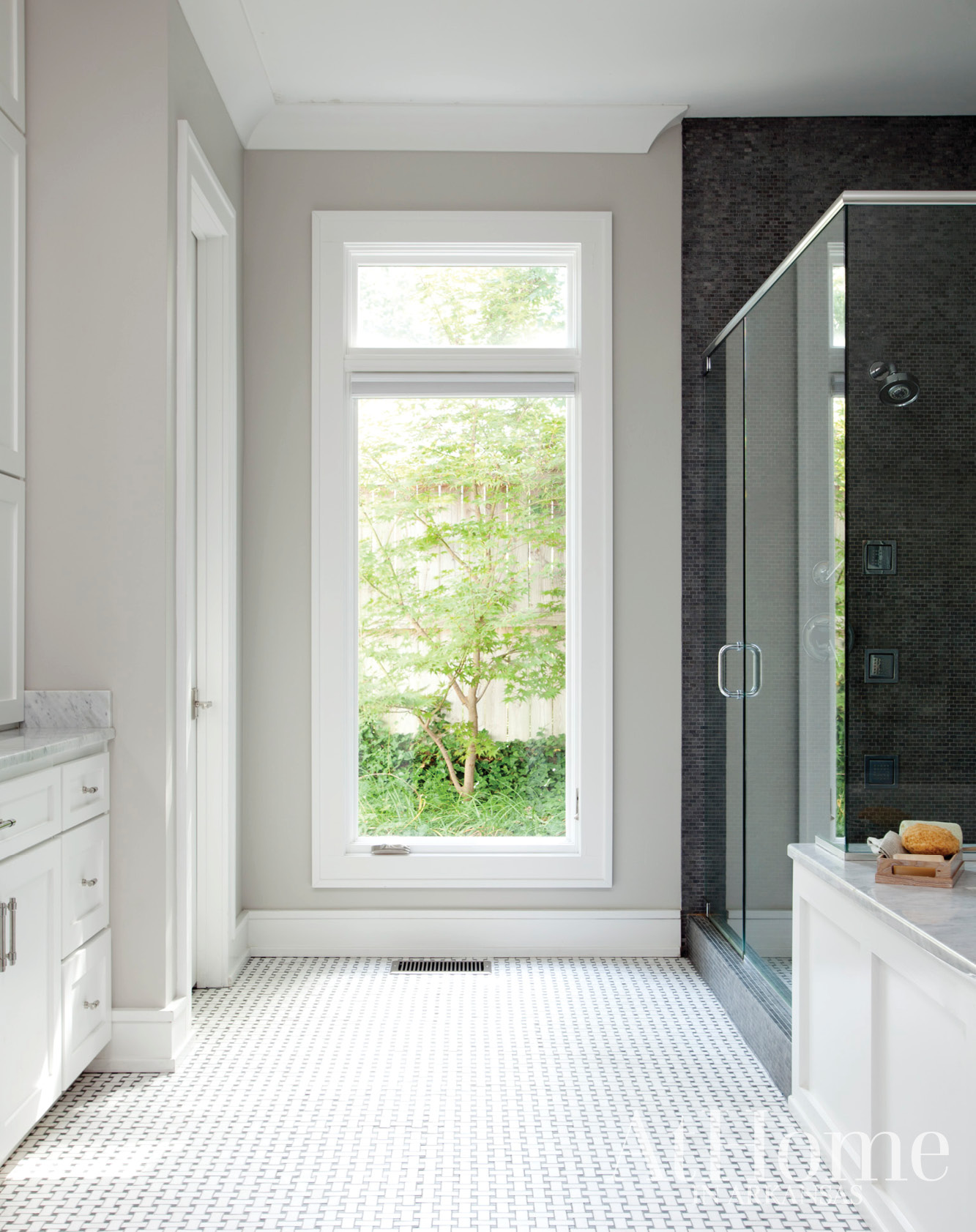 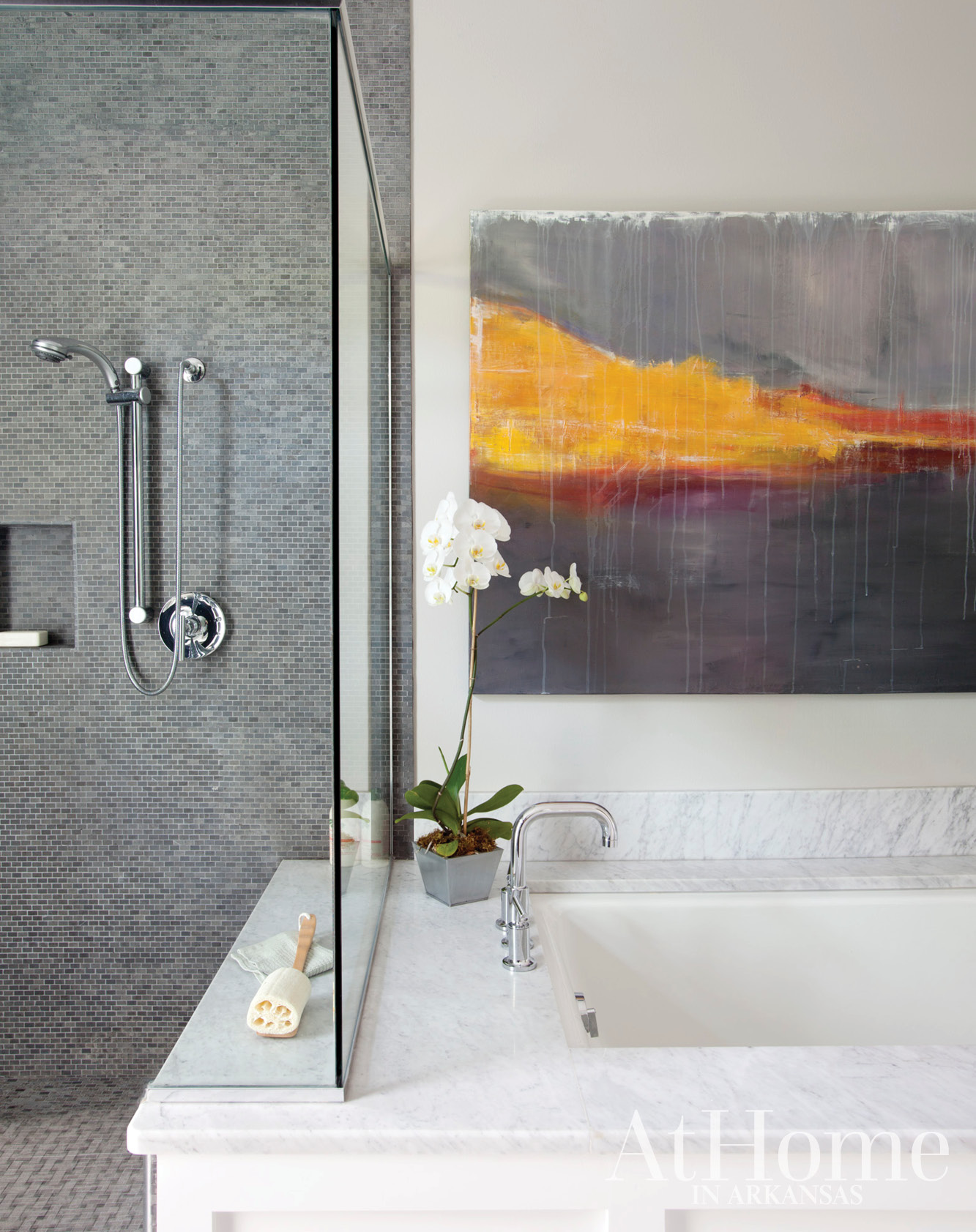 AHIA: How did the mix of materials carry over to the master bath?
SP: It began with the floor plan again, turning a smallish bath and closet into one enlarged and open bathroom. Then we used the same style of cabinetry, trim and molding as the kitchen. For surfaces, the basketweave floor tile and marble counters are traditional, while the shower tile feels more modern.
RV: The homeowners also were able to pare down what they wanted in the room so it could have simple lines and feel very orderly. They wanted a big tub and a large shower, but separate vanities weren’t a priority. That allowed us to introduce symmetry into the space, balancing the shower with the water closet, and the tub lined up across from the vanity. Between the design of the room and the materials used, the house feels balanced. 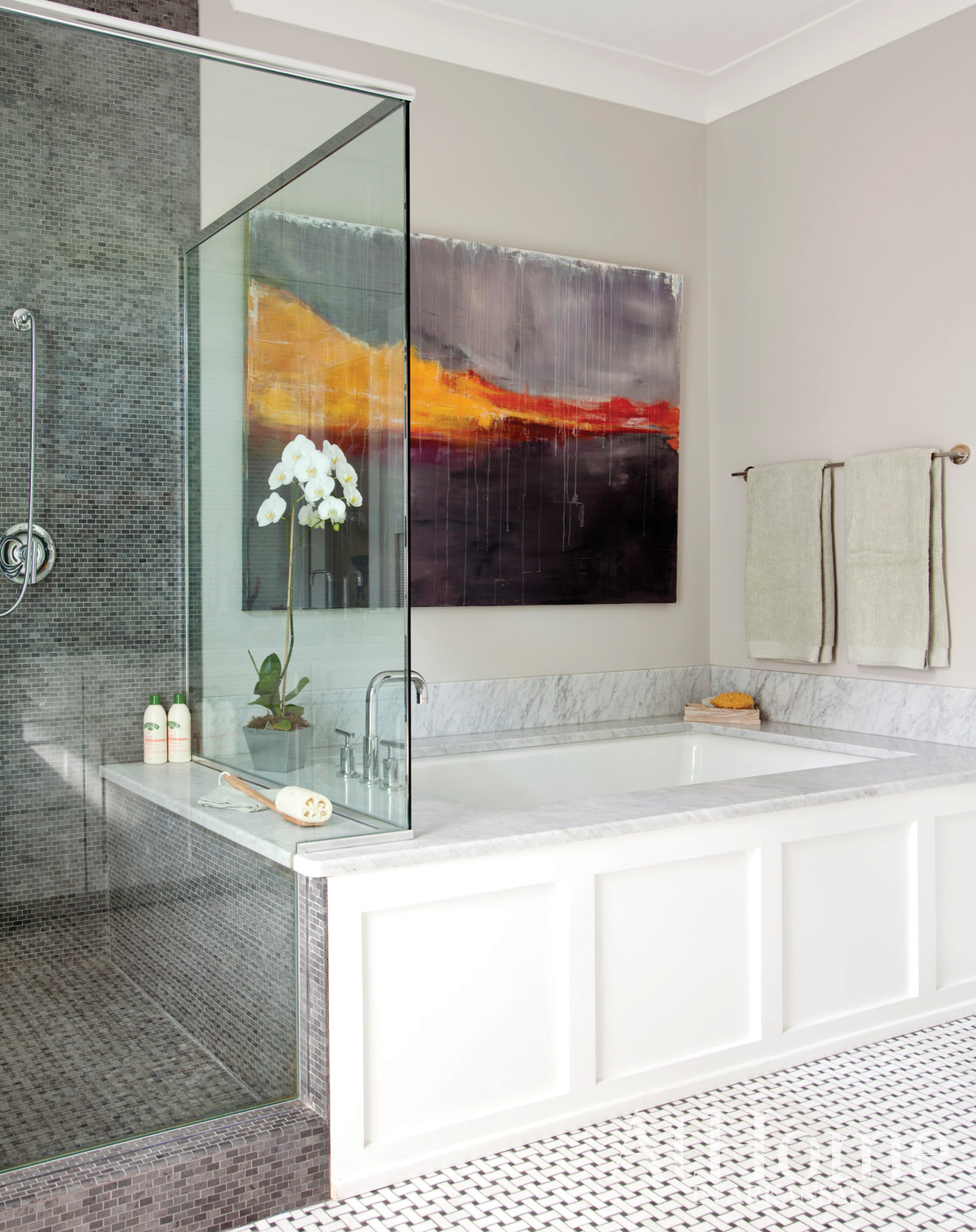 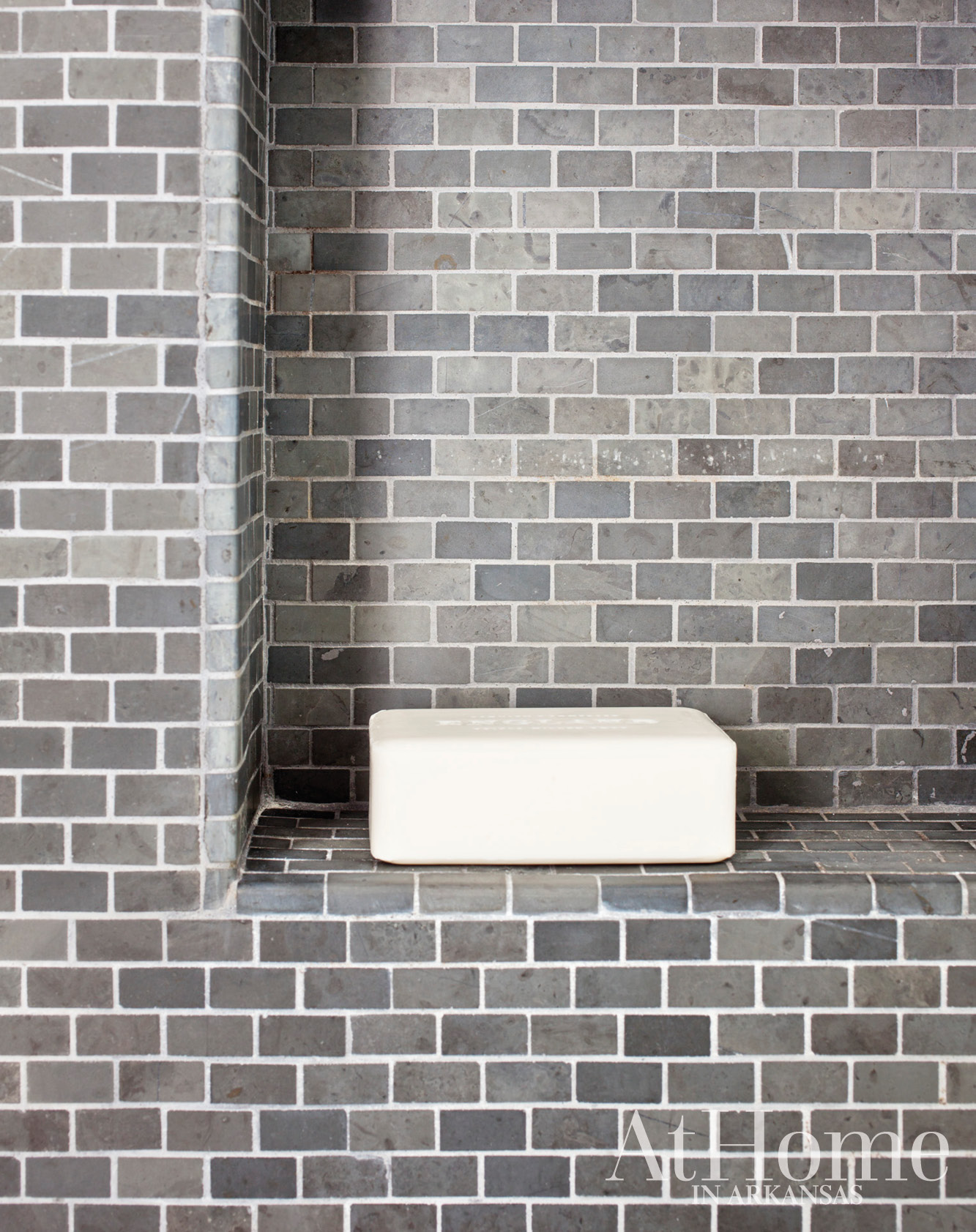 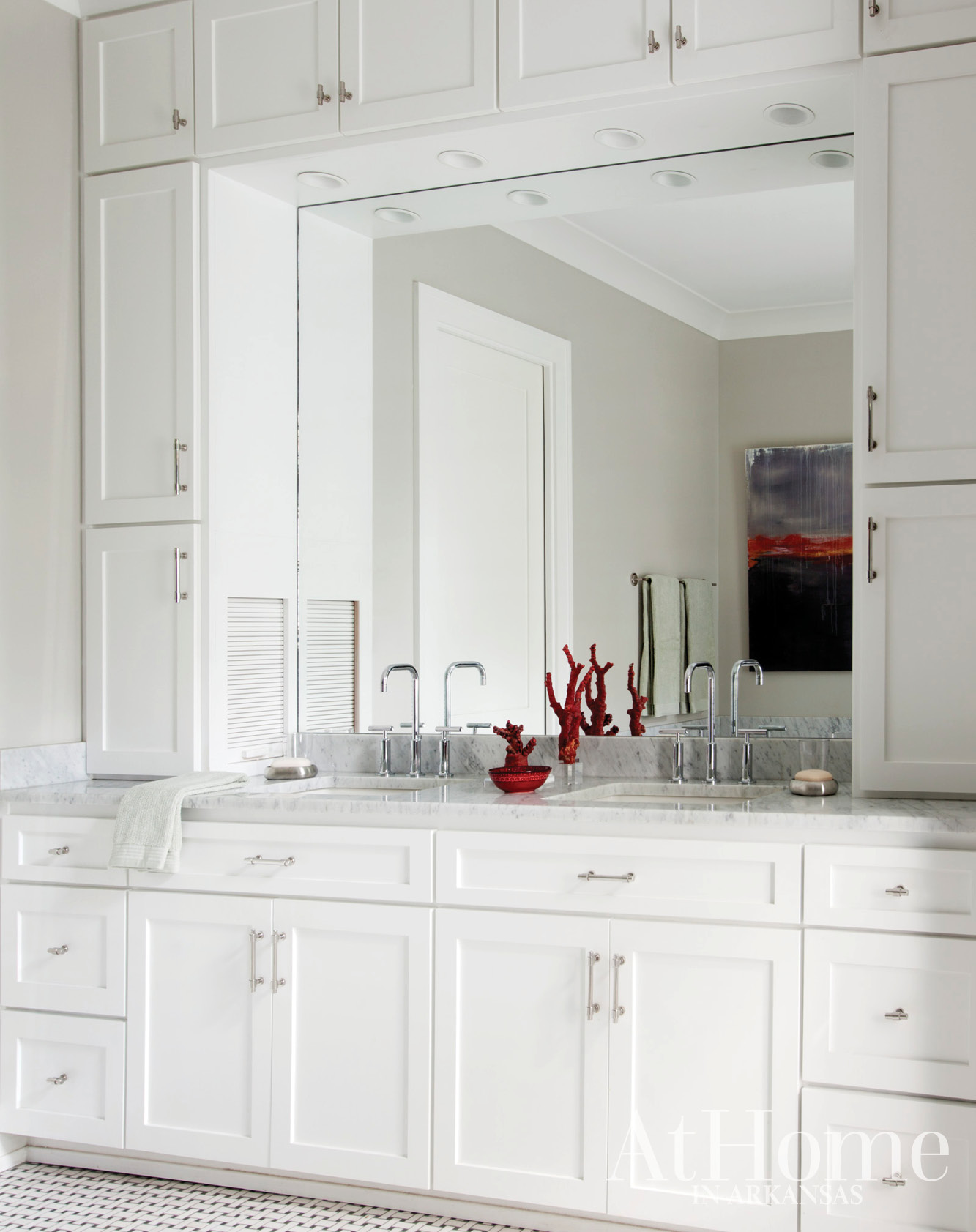