Rain, rain, go AWAY! I hate to be such a sore sport, but my goodness I wish the rain would let up just a bit! Haha. Well, my sour attitude aside, the ample rain certainly has made for a lush month here around the house, and it has kept temperatures relatively cool…for which I am very grateful. 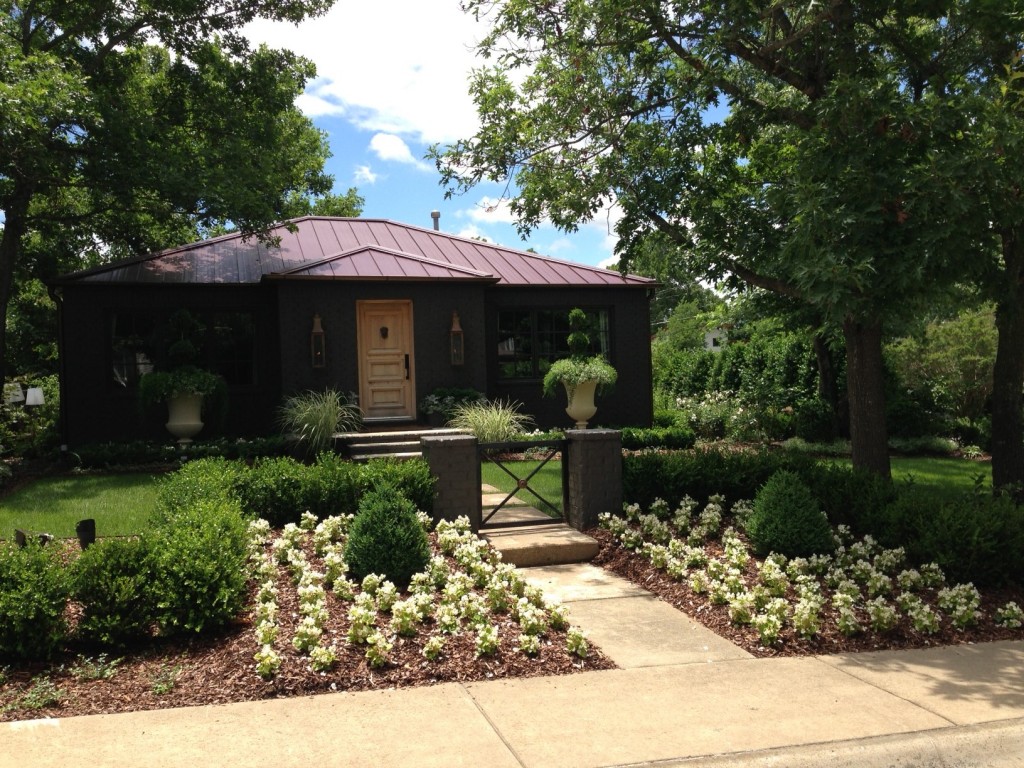 The past month has been a busy time of planting (between rain showers) cleaning and preparing for more events. In the front entry garden, we removed the white tulips that were so triumphant this spring and replaced them with white begonias. This classic bedding plant is perfect for the front of the house which receives a mixture of sun and shade. This year, they are arguably getting a little more sun than they would like because, unfortunately, we had to remove the large maple that anchored the front left portion of the garden. Although, we were extra careful not to disturb it during all the remodeling construction and new garden installation, the tree just was not happy with its new surroundings, I guess. It was showing signs of severe stress last summer, but I waited until this year just to be sure, hoping it would recover. But, alas, it died completely, and so it has been removed. I am currently trying to decide what should replace it. The decision is not as simple as I would like, due to the presence of overhead power lines. As much as I would like to replace the maple with another large shade tree, it really is not a responsible choice, since I know the power company will simply hack it to pieces once it gets too large. So, I am considering several smaller, flowering trees instead, including cherry, Japanese snowbell and serviceberry. Other than this one disappointing setback, the garden is thriving! Just next to the empty spot created by the removal of the maple, the hostas are just about to burst into bloom. 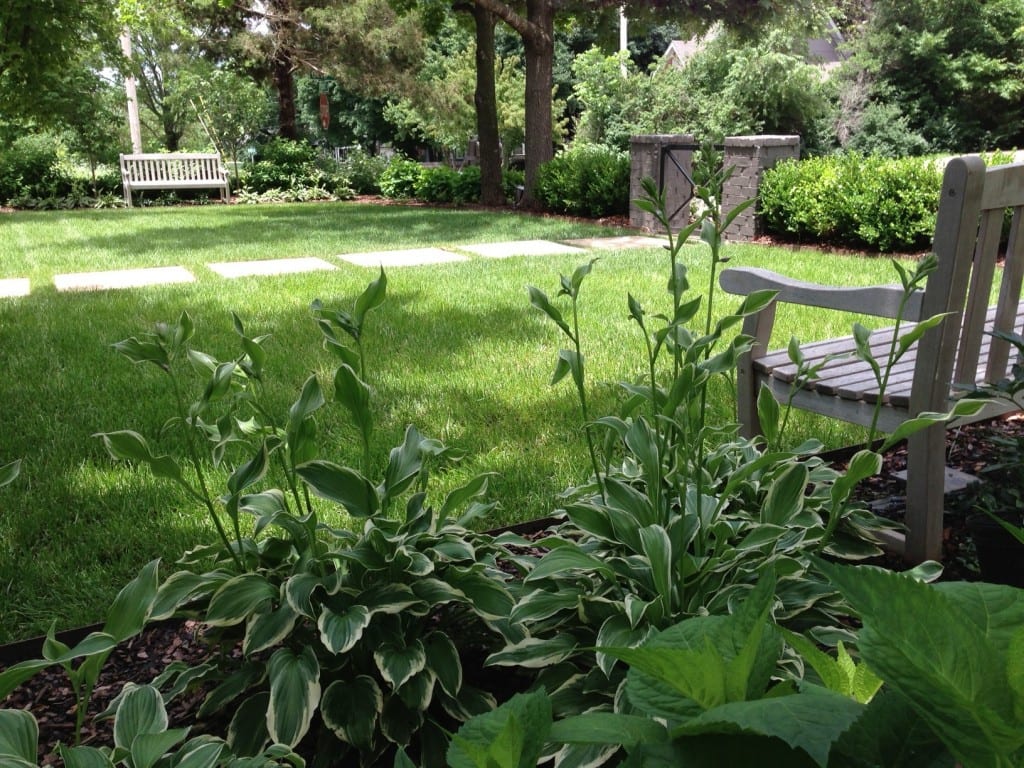 Around the corner, the perennial garden has at least doubled in mass since last month. 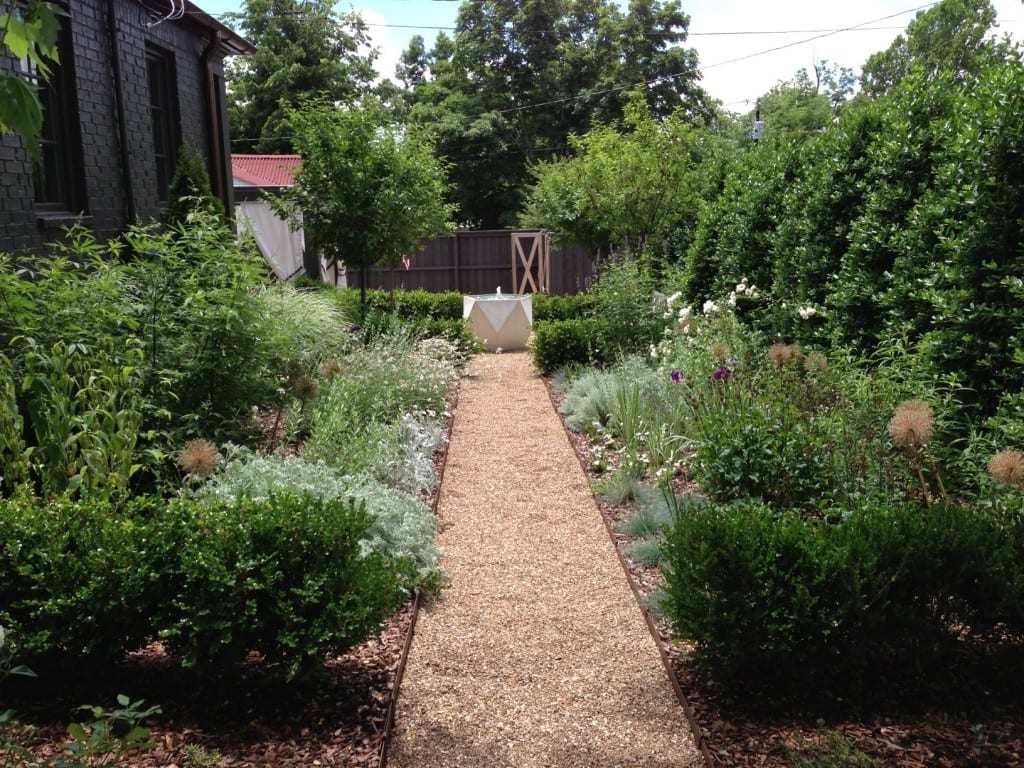 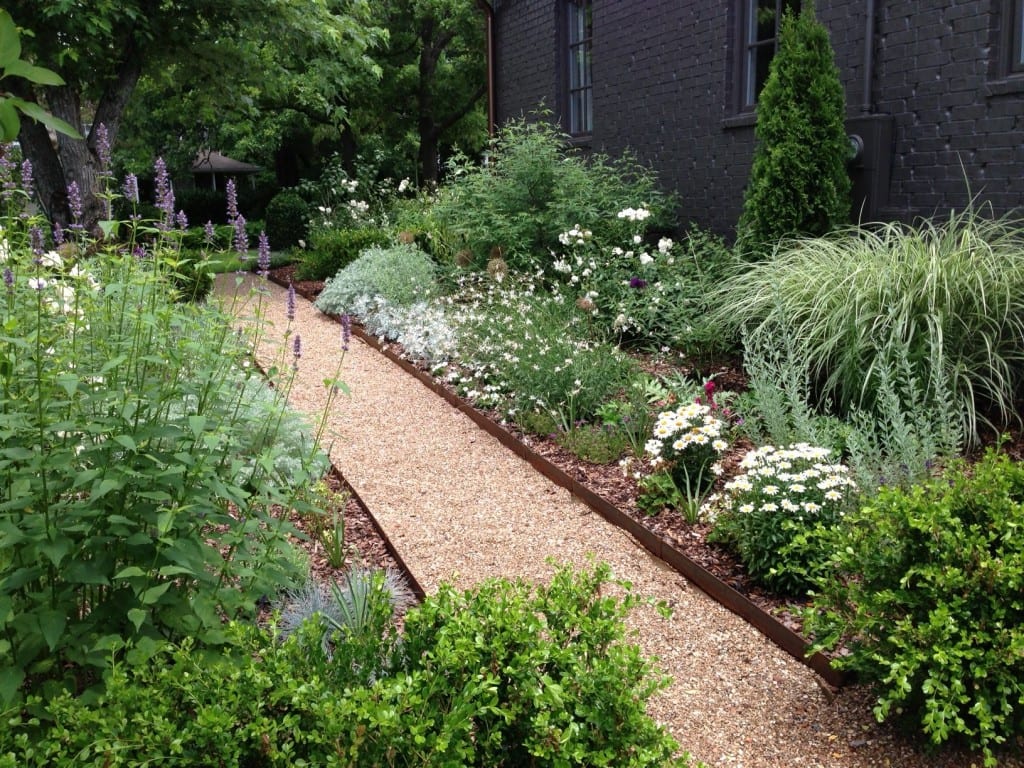 The allium have come and gone, and other varieties, such as iceberg roses, Shasta daisies and artemisia have stolen the show. 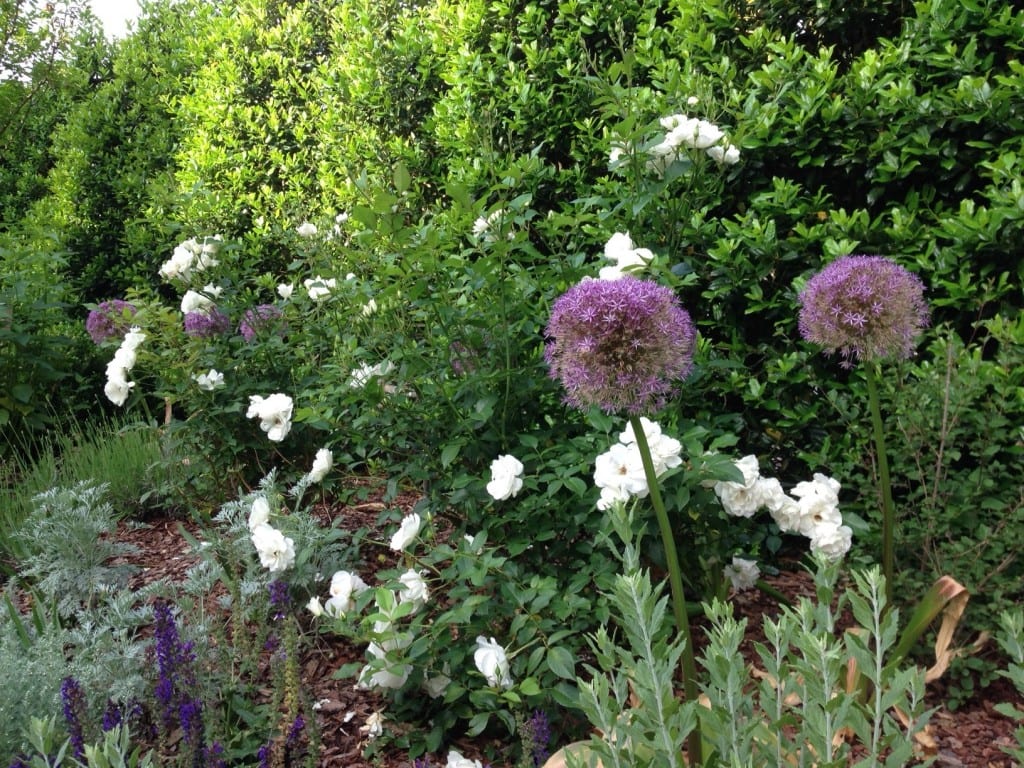 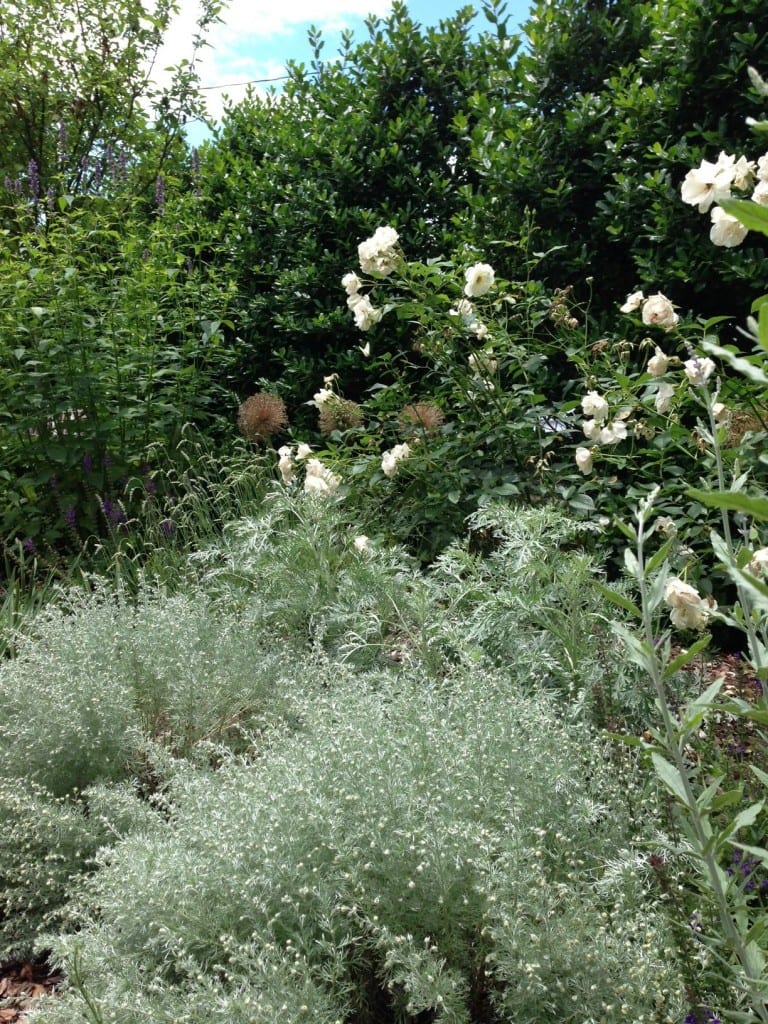 In the fountain garden, the new iris are blooming, despite having just been planted. They still have a lot of filling in to do, but I am thrilled to see them flowering so soon. 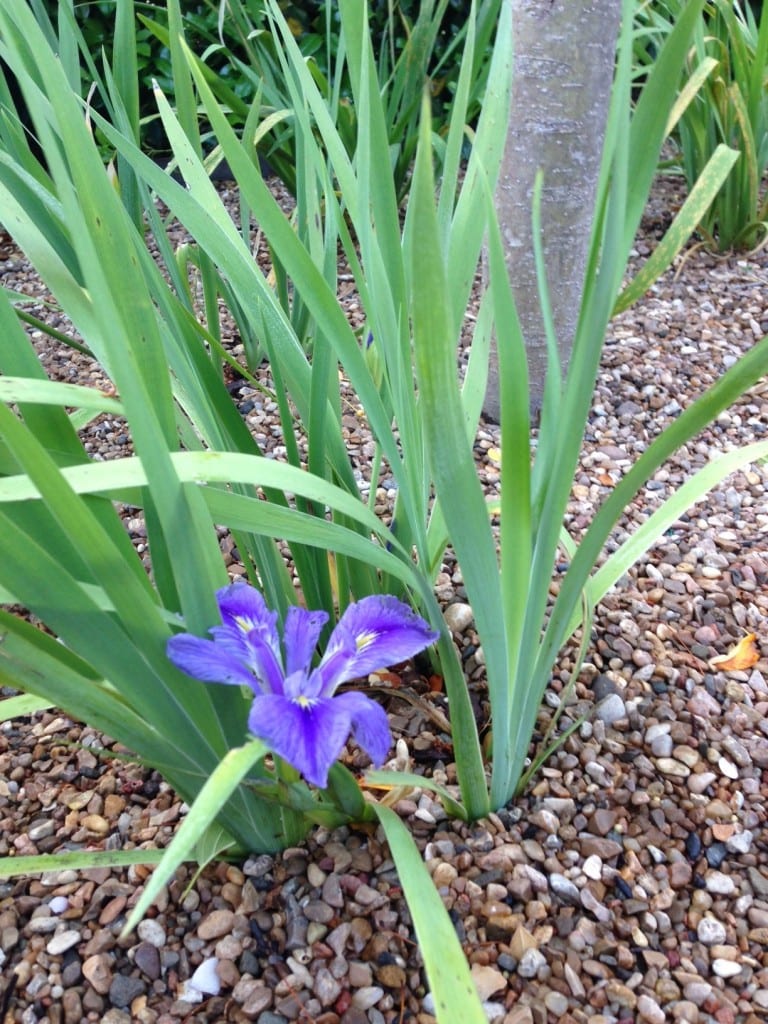 There have also been other guests pop up in the fountain garden…baby birds! The garden has been teeming with nesting birds for a couple months now, and this Robin’s nest is just visible from the kitchen window. It is nestled among the branches of one of the crab apple trees near the fountain where I can watch the little babies grow. 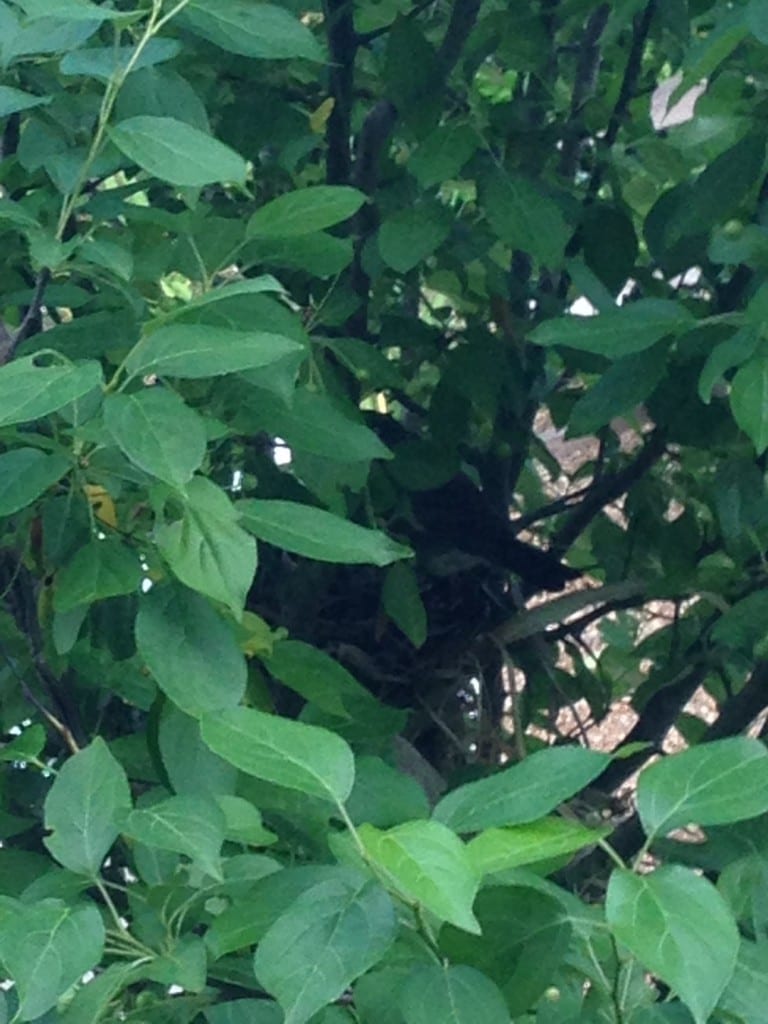 Perhaps the most impressive growth, however, has been in the kitchen garden. It has absolutely exploded…so much so that I can’t keep up in harvesting everything. Still, it so fun to cut greens for a fresh salad or grab some herbs for grilling meat when I can! 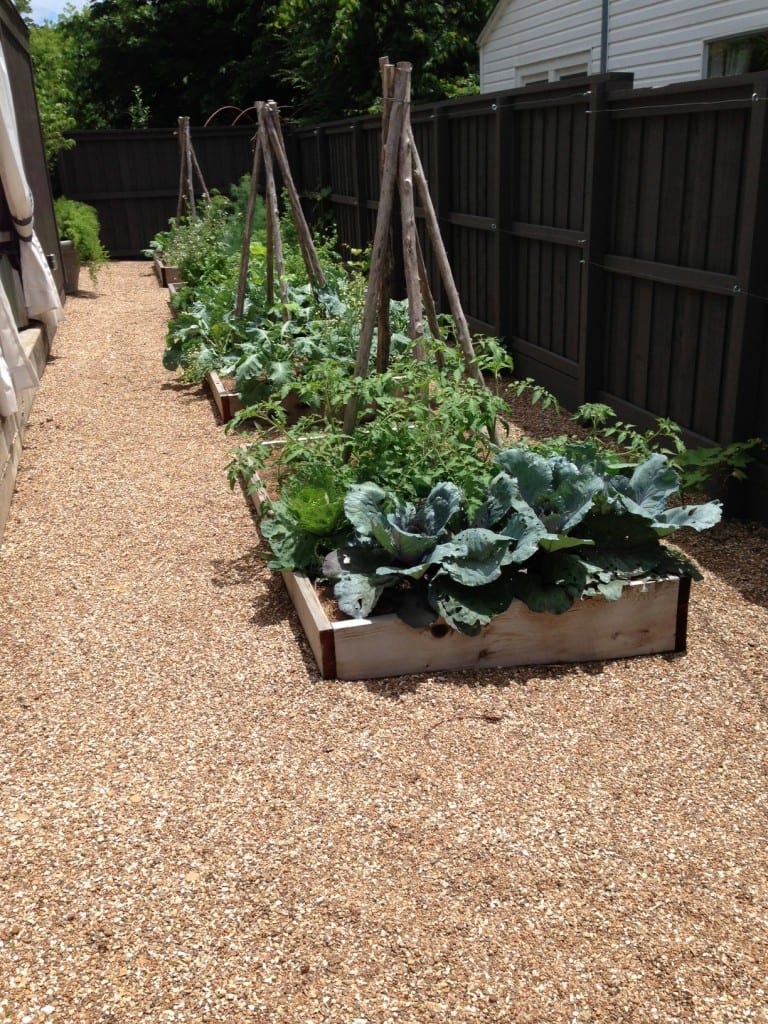 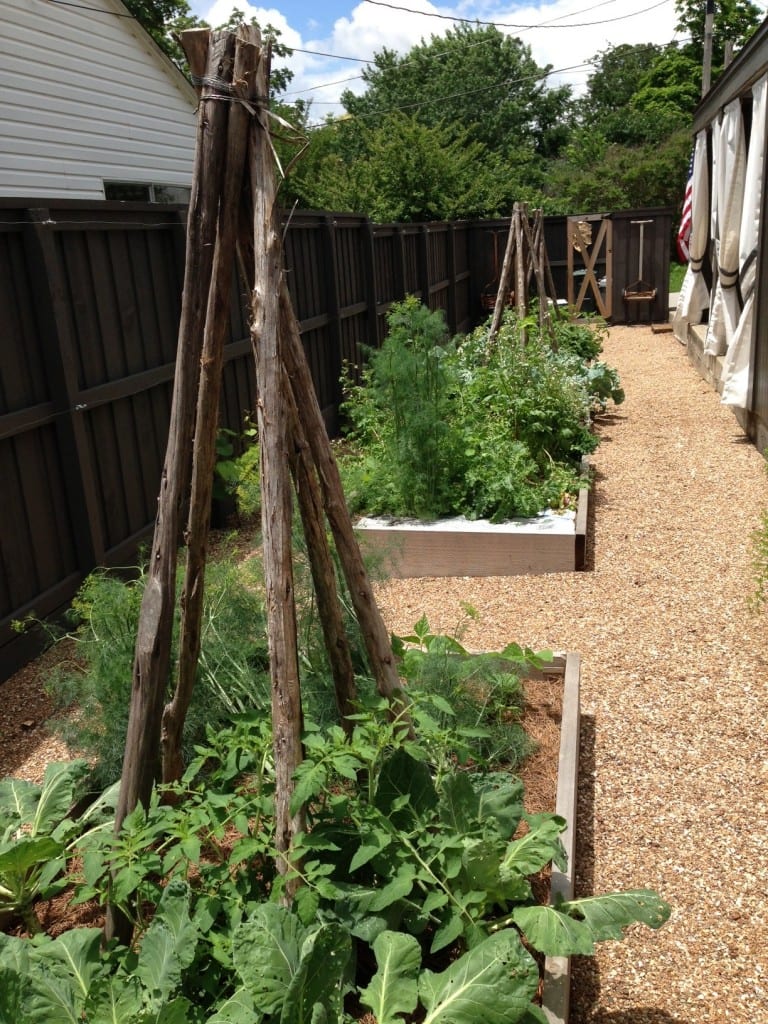 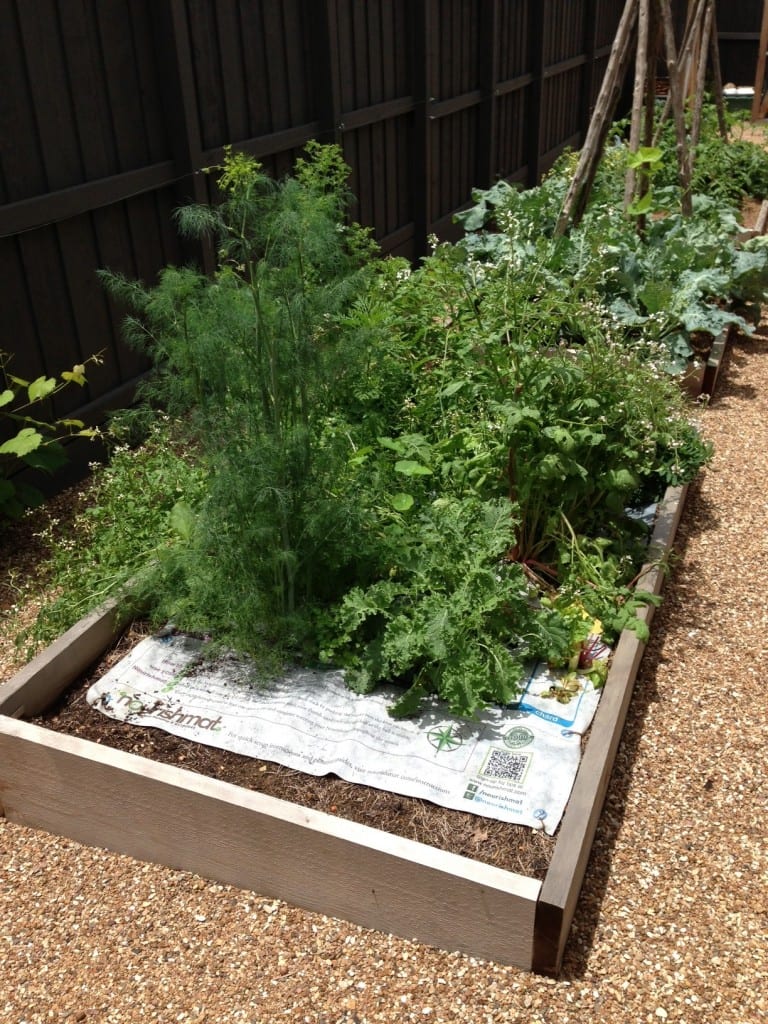 As I mentioned, we have also been preparing for more exciting events around the house. The next one is a collaboration with my friend and cohort, Jen Lewis, who will be grilling some delectable seasonal treats for our guests. 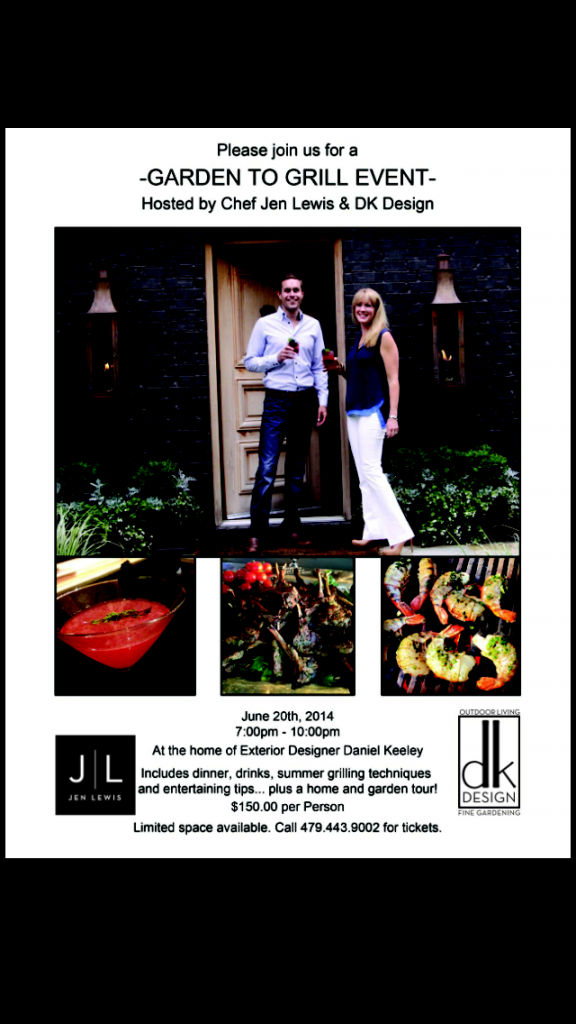 As part of the preparations, I used three large, potted holly trees to close off the entrance to the driveway. They help make the adjacent garden areas more private and, when viewed from certain angles, blend right into the permanent holly hedge separating the garden from the street. I have never been able to resist the urge to convert a driveway or carport into another outdoor living space, and this is an easy and temporary way to do just that. You might consider doing something similar if you need a bit of extra space for your next garden party. 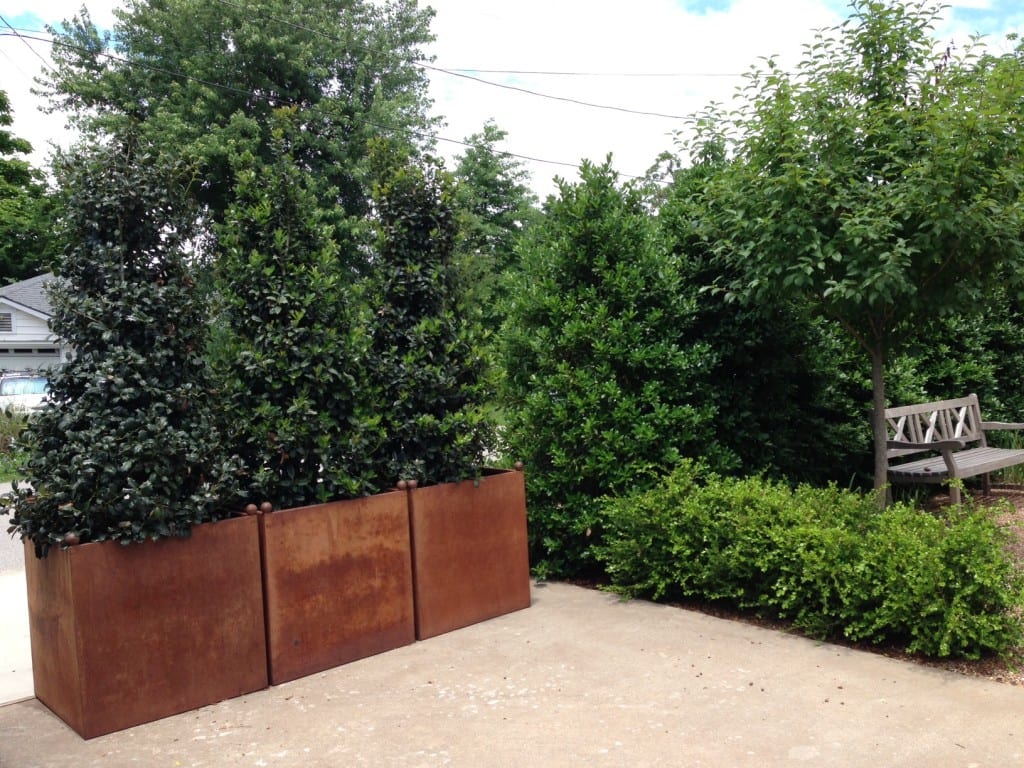 Also in preparing for more outside-the-box events, we have not forgotten about the inside of the house, either. Meet Barry the barracuda. He is the latest addition to the walls of the den and the perfect, unexpected way to greet new guests! 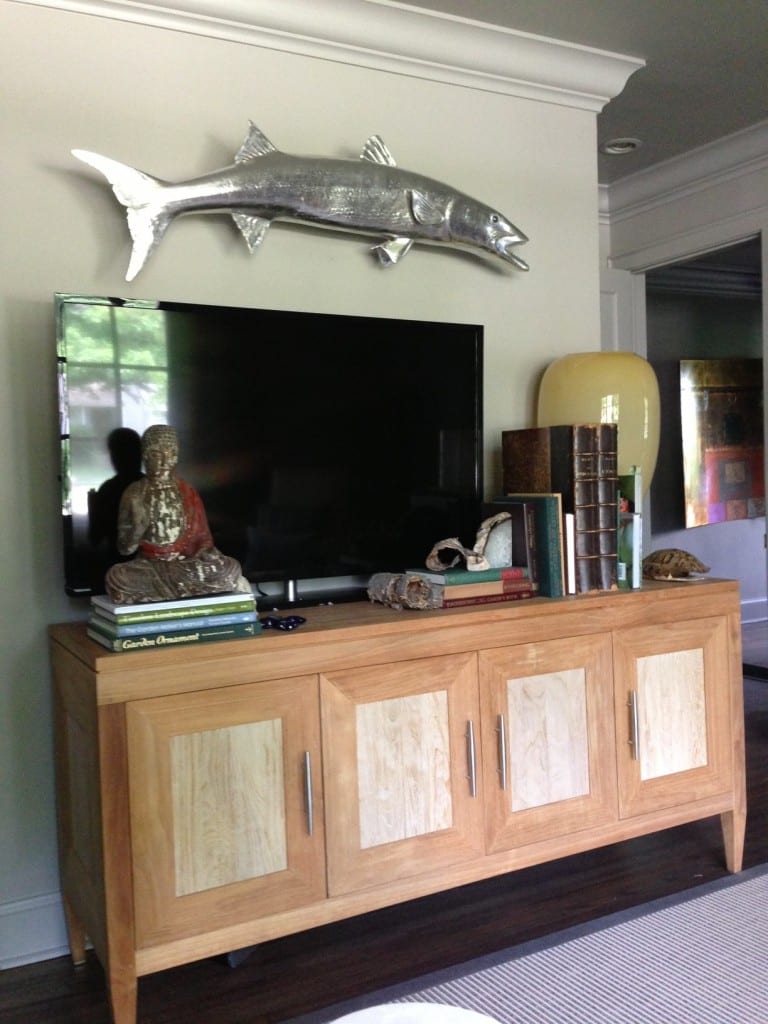 Well there you have it…another month has flown by. Please come back next month (my birthday month and of course that of the country’s, as well!) to see the latest!