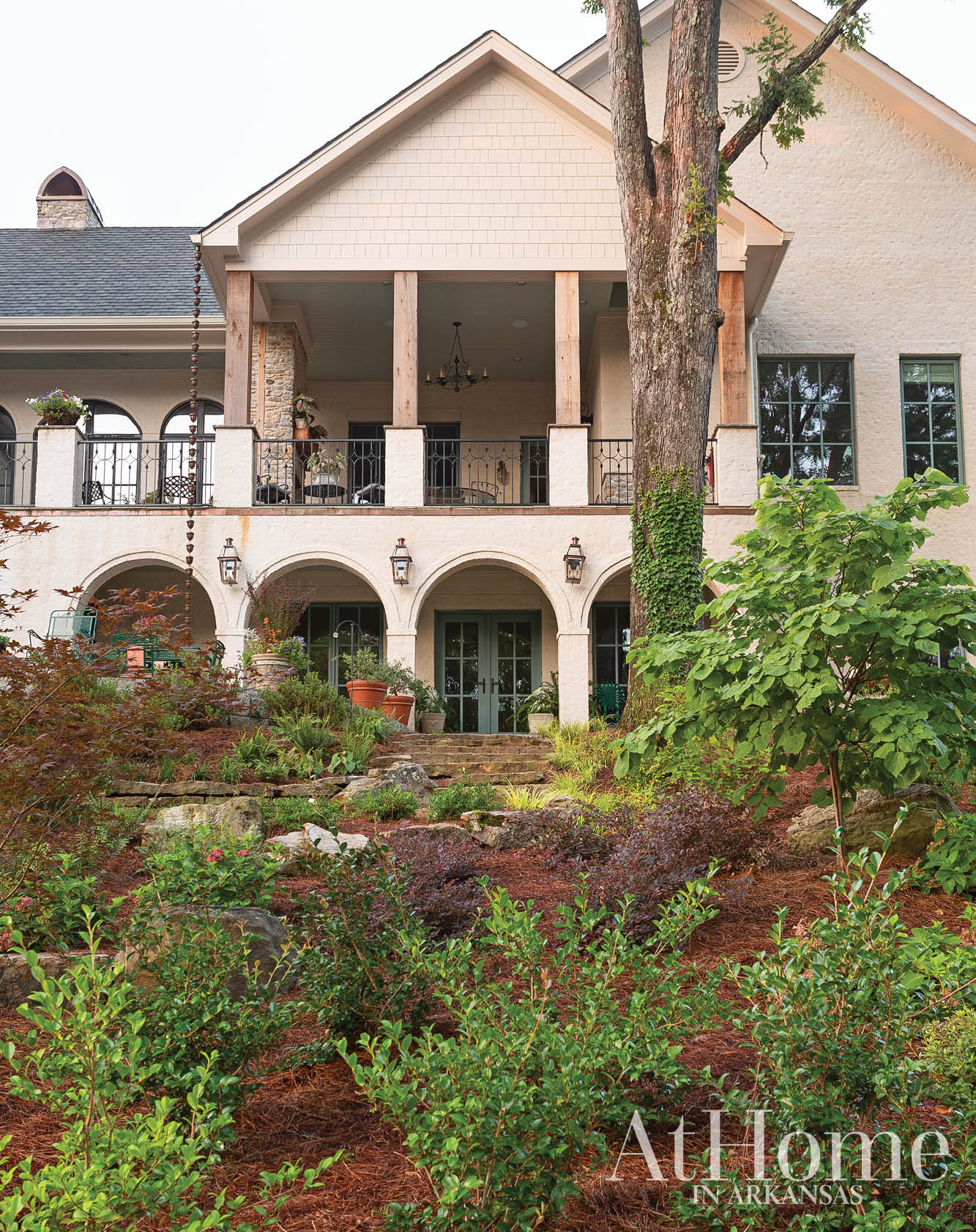 After 34 years in her previous home in Little Rock, Libby Bunch had been itching to move back to her childhood neighborhood. “My husband, Lewis, and I come to the Hillcrest Farmers Market down the street every Saturday, and I grew up in this area,” she says. So when they got their chance to build on a lot across from dear friends, they jumped at it.

Libby called on architect Wayne Hardy to design the house and contractor Bill Parkinson to bring their vision to life. “My main goal was that I wanted a house that looked like the neighborhood,” Libby says.

In the backyard, the homeowners set their sights on turning a steep hill overlooking nearby Allsopp Park into a soothing, comfortable, and private garden retreat. To transform the once rugged terrain, Zak Grothe with The Good Earth Garden Center and his team imported tons of native stone and boulders to build retaining walls and carve pathways into the hill. Then they planted a variety of perennials, flowering plants, and evergreens, and were even able to incorporate ferns and hostas Libby transplanted from her previous garden. “No matter the time of year, there’s always something blooming out here. That’s what I like best about it,” Libby says. 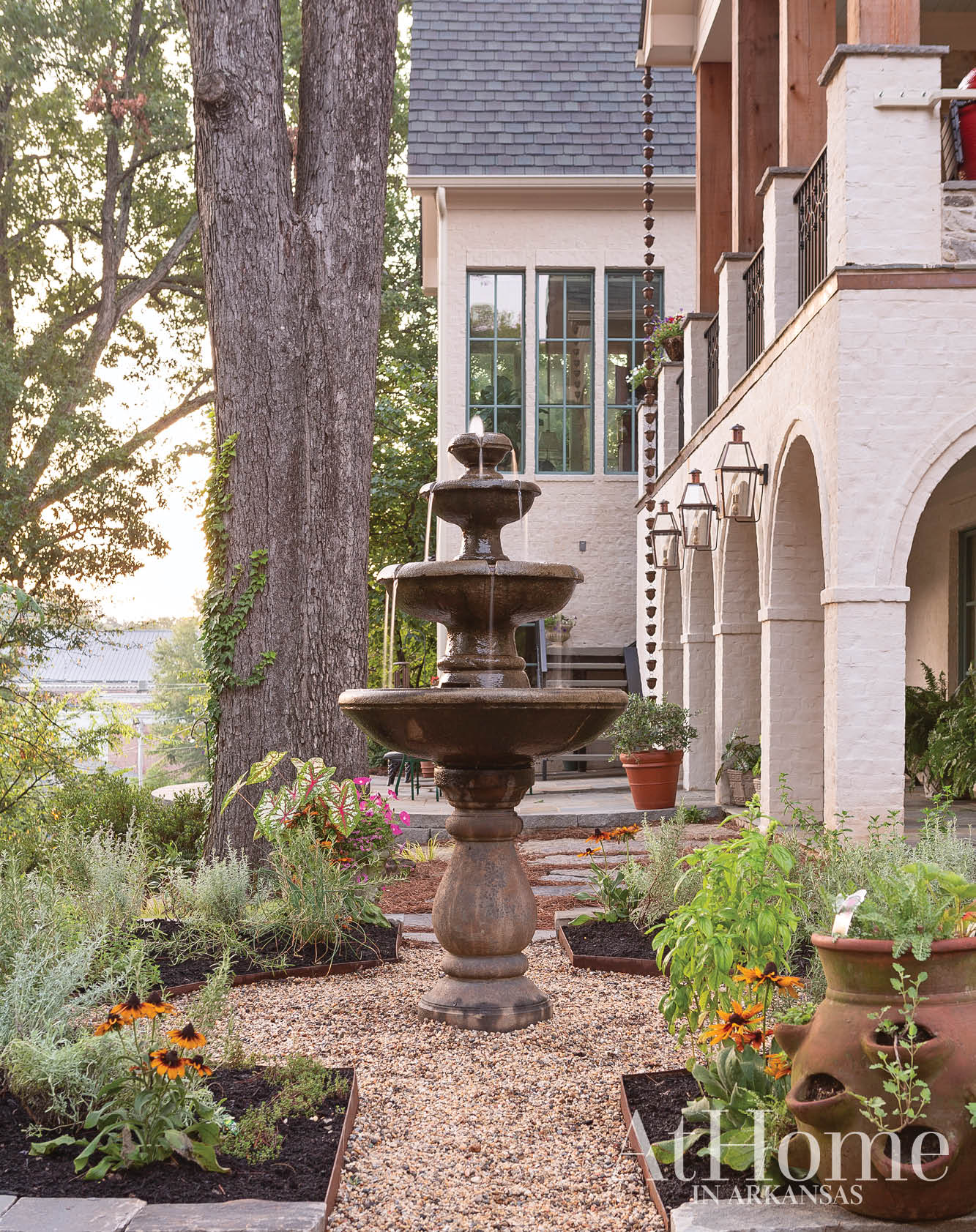 Garden Style
Elements of Libby’s personal style have been incorporated into her home’s exterior as well as the landscaping. For example, a concrete fountain from her previous home is centered in an herb garden behind the house, and a copper acorn rain chain, rather than a traditional gutter, channels runoff from one side of the roof. Elsewhere, copper gutters coordinate with the rain chain and copper seen on the lanterns and chimney caps. 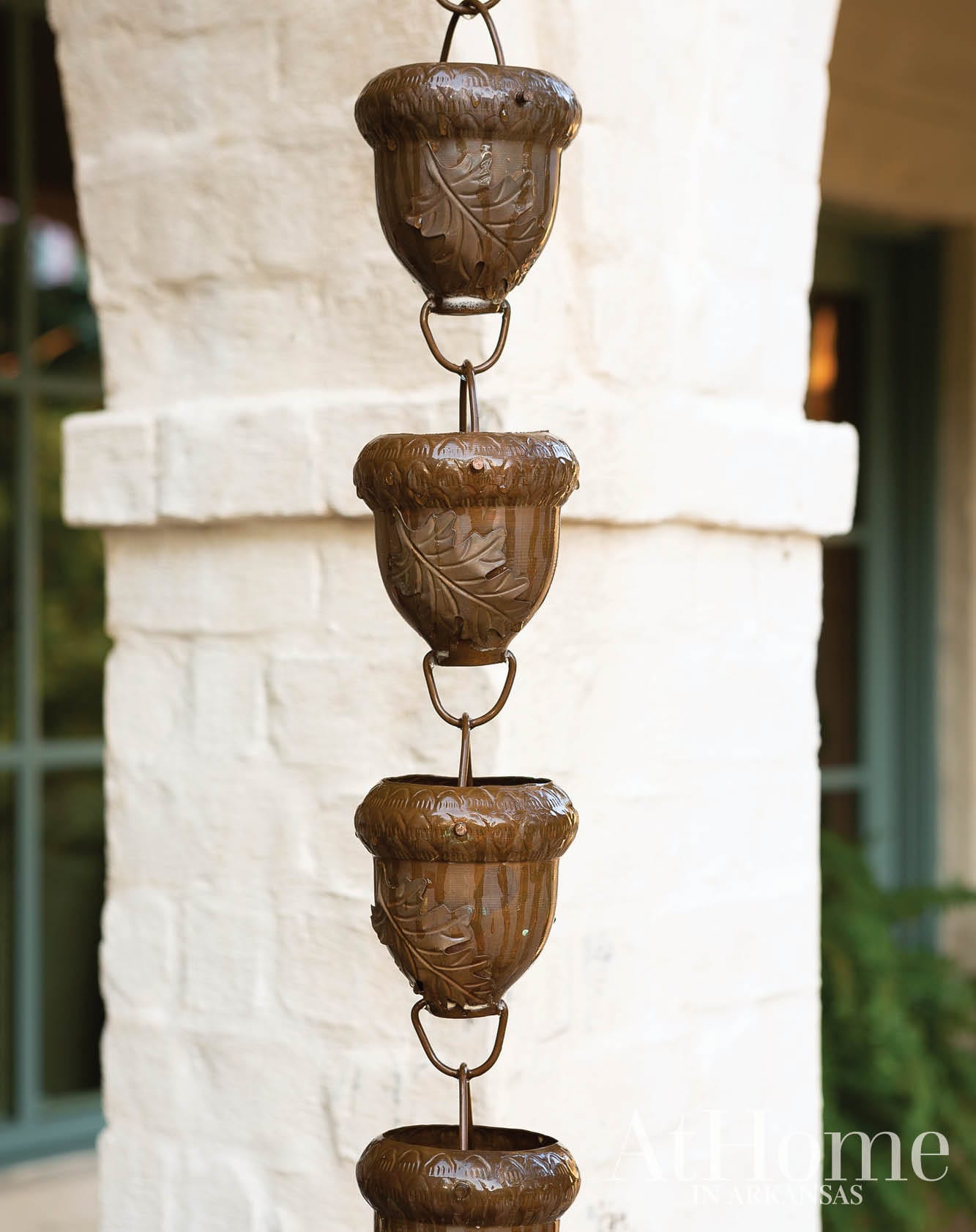 A copper rain chain mimics the look of acorns. 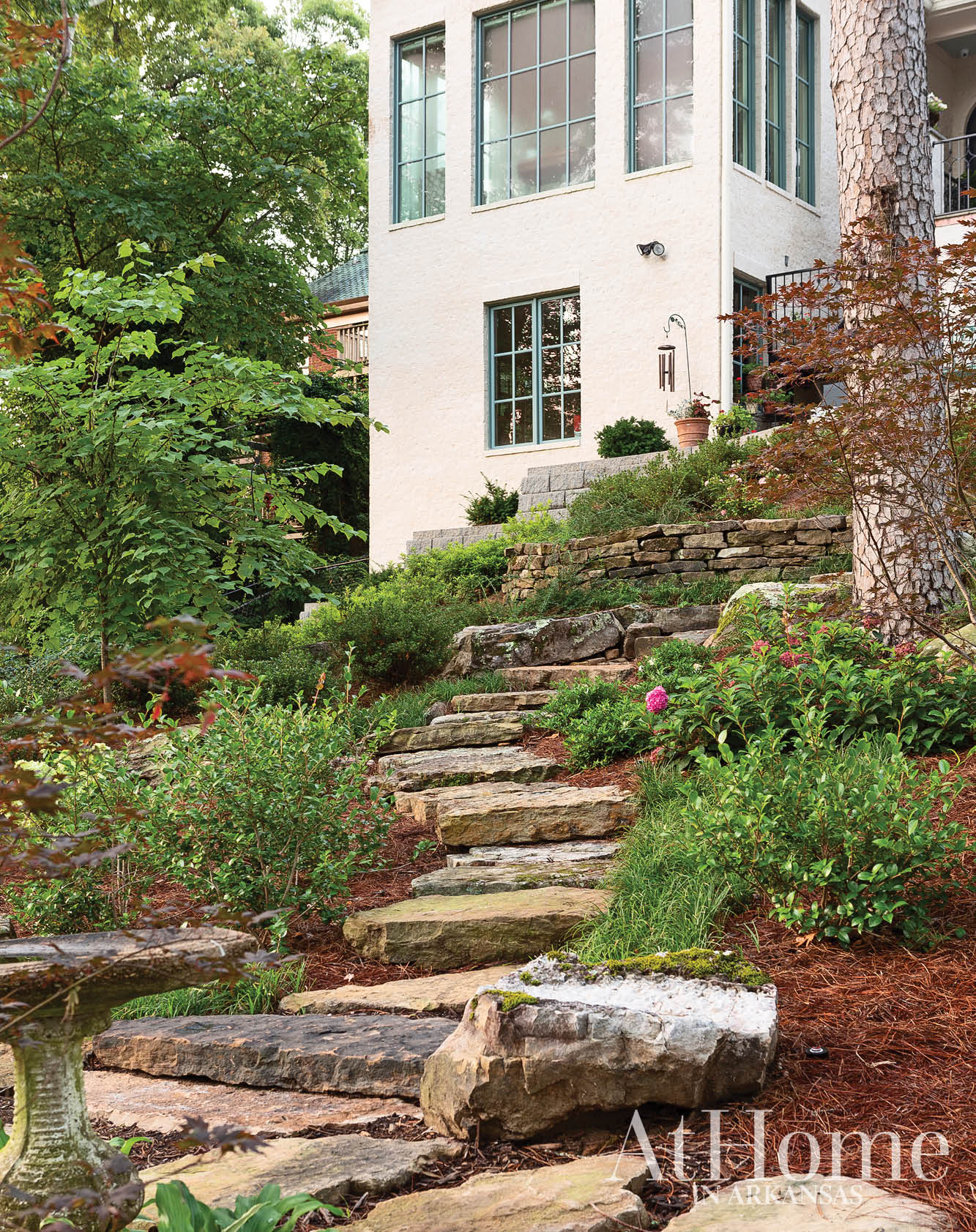 Time Well Spent
Aluminum-clad windows painted Sherwin-Williams’ “Underseas” stand out against the exterior’s painted brick while playing off the lush greenery outside. An enclosed space under the upstairs sunroom serves as a potting shed. “It works great because it has windows on all three sides, so we can bring some of our plants in there in the winter,” Libby says. 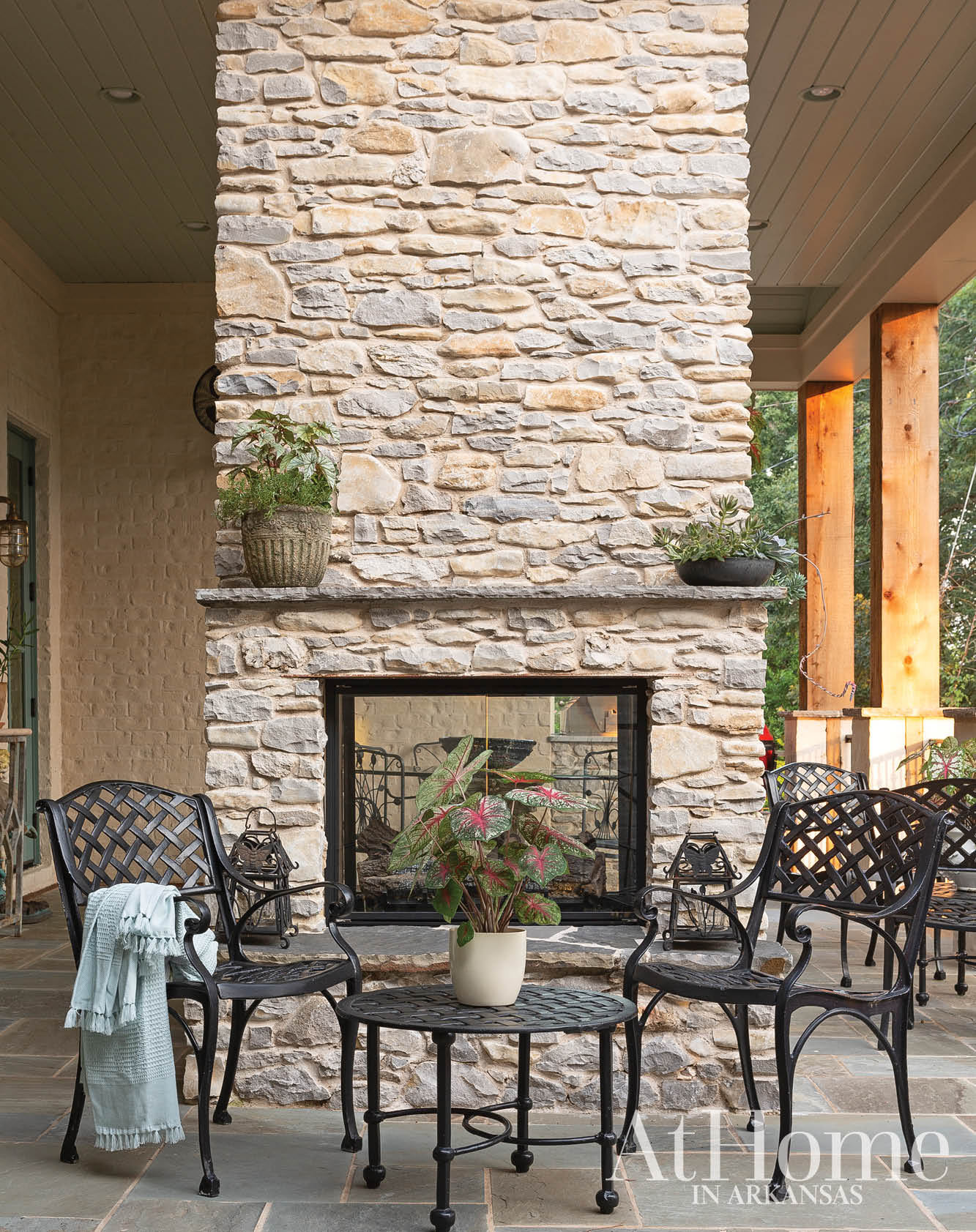 On the upper level covered porch, several sitting areas and an outdoor fireplace (pictured below) are favorite spots for Libby and Lewis. “We’ll sit out there till dark and listen to the insect symphony,” she says. 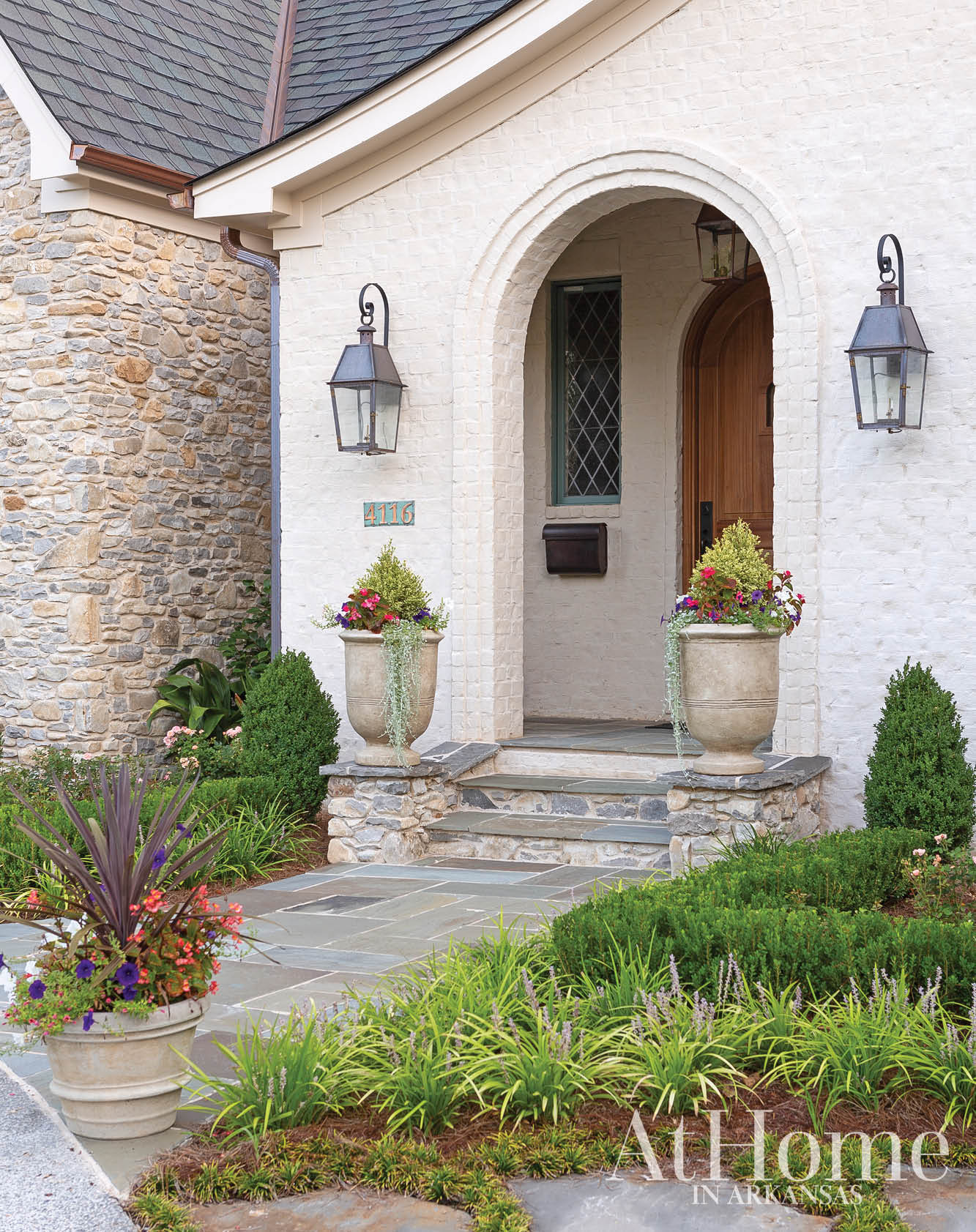 Front Door Design
Arched doorways, a mixture of stone and painted brick, and a catslide roofline are hallmarks of the English cottage feel that Libby desired for her home. Baby gem boxwoods, dwarf mondo grass, and lily turf line the walkways while seasonal color adds interest in containers framing the front door.