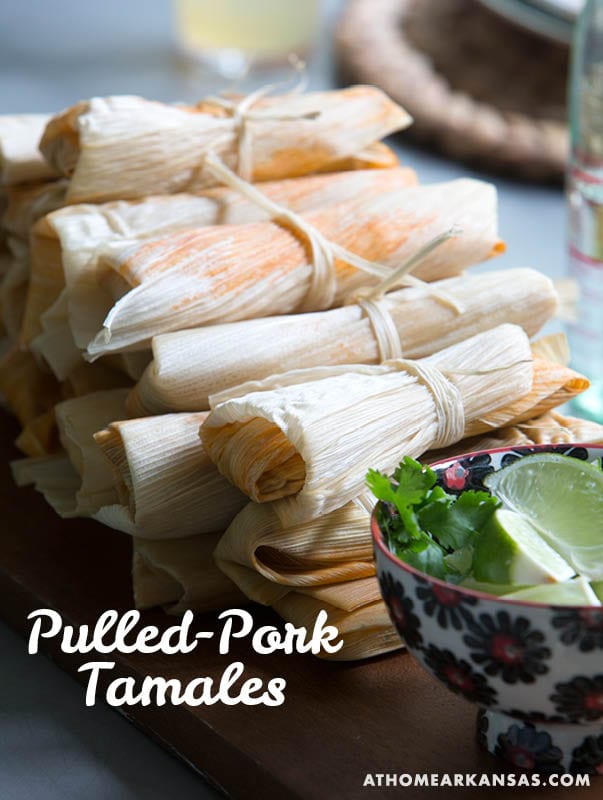 As promised, we are back today with yet another mouthwatering recipe from the test kitchen of Heights Taco & Tamale Co. And we are taking on world-class tamales! Here’s the recipe (you’re gonna earn that deliciousness!): 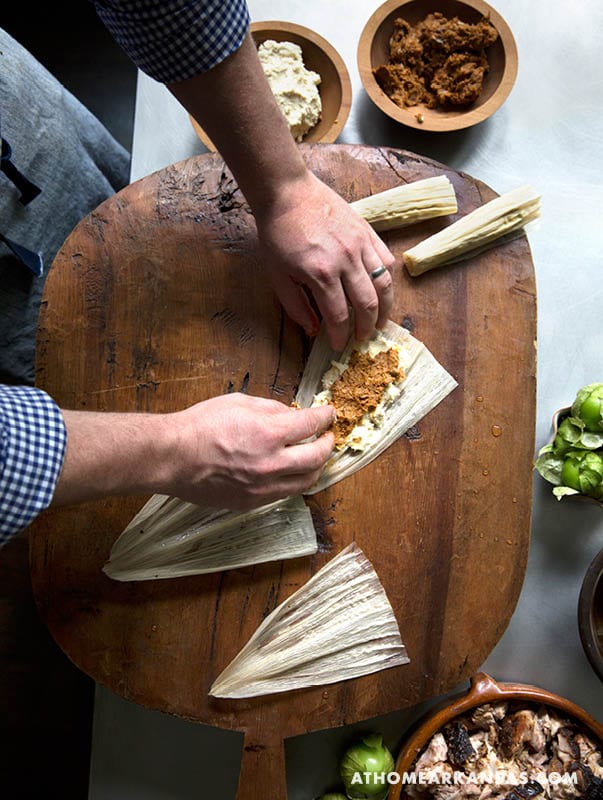 Cut the pork shoulder into 3-4 equal pieces. Place the pork meat in a 4-6 quart pot with the onion, garlic, brown sugar, salt, and pepper. Fill the pot with 6 cups chicken broth. Cover and bring to a boil over medium-high heat. Reduce heat to low and let simmer until the meat is completely cooked and very tender (about 1-2 hours).

Let the cooked pork cool before shredding it. Reserve the pork broth for making the tamale dough.

While the meat is cooking, simmer the dried ancho and guajillo chilies in 2 cups of water for 10 min. Let cool slightly. Puree the chilies (drained, discard water), 2 cloves of garlic, chili powder, cinnamon, and ground cumin with 2 cups of pork broth until smooth, (be very careful pureeing hot liquids as the top of the blender will have a tendency to pop off and make a mess or worse!). Pour the chili puree over the shredded pork and mix until well combined.

Season with more salt and pepper, if necessary. Cover and refrigerate until ready to use.

Making the Masa
In a medium bowl, combine the masa harina, baking powder, and salt.
In a large mixing bowl, cream the lard with an electric mixer on medium-high speed until light and fluffy.

With your electric mixer still on medium-high, beat in the masa harina, one cup at a time until no dry bits of masa harina are visible (Mixture will be grainy). Reduce the electric mixer speed to low and stir in 3 cups of very warm pork or chicken broth until it has all been absorbed. Using your hands, press the mixture together to form a dough.

Spoon about 1/4 cup of dough onto each corn husk. You could spread the masa with a spoon, but I think it’s much easier to flatten it with your fingertips. A good rule of thumb is to flatten the masa to about a 1/4-inch thickness across two-thirds of the corn husk, leaving a 1/4-inch space on one side and the top, and about a 3-inch space at the bottom.

Spoon a couple tablespoons of the meat filling down the center of the masa.

Starting at the 1/4-inch edge, gently fold your tamale in thirds, then tuck in the ends. This is the easiest way to wrap tamales. The process will get easier with each tamale you make. Practice makes perfect! Place the tamales seam-side down on a large plate, until you’ve finished with all of the tamales.

For more recipes from the Heights Taco & Tamale Co. test kitchen, see Pt 1 of this menu preview: Paloma and Pico Recipes And to see all of the images of the dinner party and read our interview with executive chef Scott McGehee read the article: “Prep School.”