Happy New Year! I hope you had a delightful holiday season and are starting the new year with a bang! Ok, y’all…it is cold. Really cold! Take a look at my fountain: 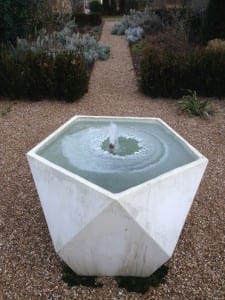 As I write this in Fayetteville, the projected low tonight is 4 degrees. Ouch! So, as you might expect, there hasn’t been a whole lot happening outside in the garden around here. But as I sit here in the den, bundled up in the new robe I got for Christmas and a toasty cashmere throw, I realize there are plenty of fun new things happening inside to share with you. What follows is a somewhat random collection of accessories and flourishes I have added around the house in recent months. The one theme that unites them all, though, is bringing the outdoors in which is the perfect way to Live Outside the Box this time of year (without getting frost bite!).

One of my favorite new additions is this pair of antique French garden plans. Another purchase from my friends at French Metro Antiques in Fayetteville, the plans occupy what had been a large blank spot on the wall in the living room. Next to them are two wood pieces that definitely bring in a bit of the outdoors. The ball on the floor is sculpted from the root of a teak tree, and the gnarly thing next to it is the root structure of a tree that I dragged out of the white river years ago and turned into a sculpture. 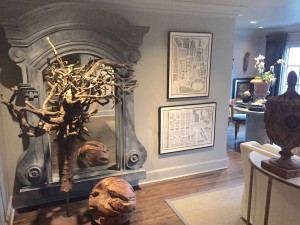 This plan shows the design for the chateau and royal garden in the town of Luneville, France: 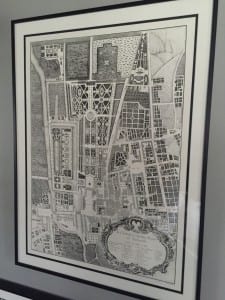 While this one is titled simply, “General Plan for the Menagerie of the King.” 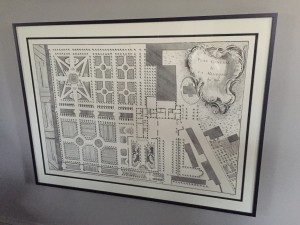 Across the room are two more framed pieces that were a gift from my wonderful parents. They came from Marshall Clements in Little Rock and are actual leaves with designs cut or scraped into the top layer. 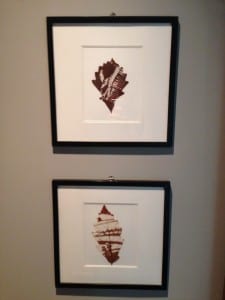 Also in the living room is this aged wood pedestal that I used to display a sculpture I already had. It almost seems to have been made out of driftwood, which is a favorite theme of mine, and I especially like the contrast of the formal French style and the rustic material used to execute it. 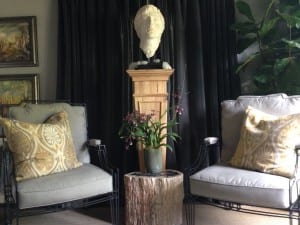 Another small way I brought the outdoors in is with crystals. I got a basket full on a trip to Hot Springs this summer and went a little nuts with them all over the place! They really are naturally beautiful objects, and I like how they look combined with this sculpture. 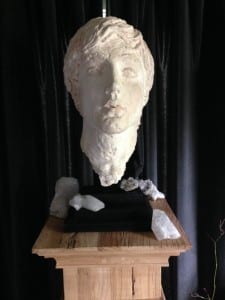 Crystals also help bring to life this arrangement, which combines two striking elements from two close friends, as well as some creative thinking. The crystal votive holder was a gift from my friend and fellow designer, Christopher Todd, and the gilded bronze vide-poche (“empty-pocket”) came from French Metro Antiques. Putting them together and adding air plants to create a unique display was the idea of one of our employees, Rebel, and I think it came together beautifully! 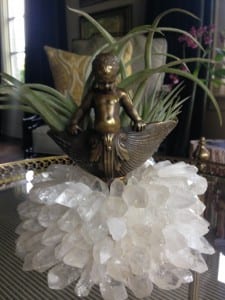 Meet Barry the barracuda. He now reigns supreme over the den! Well, ok, Barry isn’t a real barracuda, but rather a stylized, silver-leafed resin sculpture, but I think he is the perfect combination of “contemporary meets rustic” for this room. 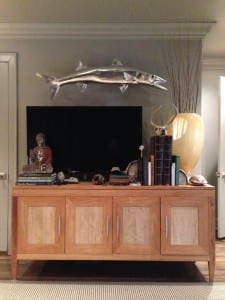 On the credenza beneath Barry is a whole host of other natural and outdoorsy items, collected over the past year or so including a deer skull, a turtle shell, river birch bark shavings gathered from a clients garden, a stone sculpture by Arkansas artist Michael Davis Gutierrez (another generous gift from great friends) a graphite leaf, geode bookends and various rocks and pebbles, several of which have been ‘donated’ by friends in what has become somewhat of a humorous custom. 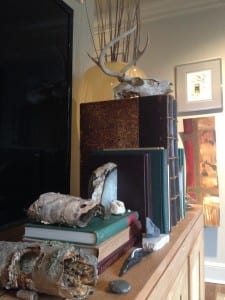 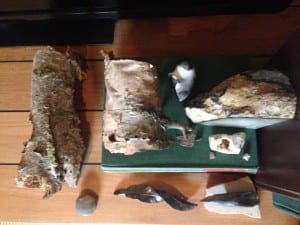 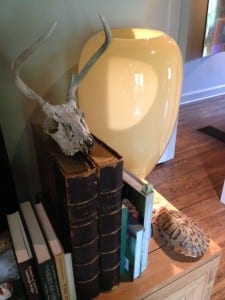 This final piece also involves the generosity of friends, along with a tale of blatant copy-catting! A friend and client who takes daily walks began collecting the many beautiful feathers he would find during his outings. In an inspired moment, he decided to display them by combining them with a twig basket into a stylized nest. When I saw his creation, I fell in love with it, so he secretly began collecting more feathers for me. So, here you have my 100% plagiarized version, along with a real ostrich egg which was a gift from another friend this past Christmas. It just seemed like a natural, if obvious, fit! 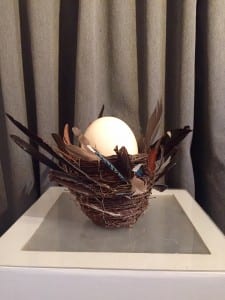 There you have it: my version of bringing the outdoors in this winter. I hope these little touches might inspire you to undergo a similar project of your own. After all, just because it is cold outside doesn’t mean you can’t Live Outside the Box! See you in a month!

Exterior designer Daniel Keeley is an Arkansas native and founder/principal of DK Design. His work has won numerous awards and accolades and is featured regularly in various publications. For more information visit dkdesignoutdoor.com.

To see the progress at the “Out of the Box House,” read Daniel Keeley’s past updates!

In the article “That’s a Wrap,” in our December issue, three leading designers offered gift wrapping inspiration and ideas. Now, we’re giving you the how-tos! PLUS, we’re asking these designers a few quick questions about their personal holiday style. First up is Shayla Copas, of Shayla Copas Interiors in Little Rock. Her glitzy and glamorous take on a traditional look is simply timeless. Now she’s giving you a step-by-step guide to recreating this look: 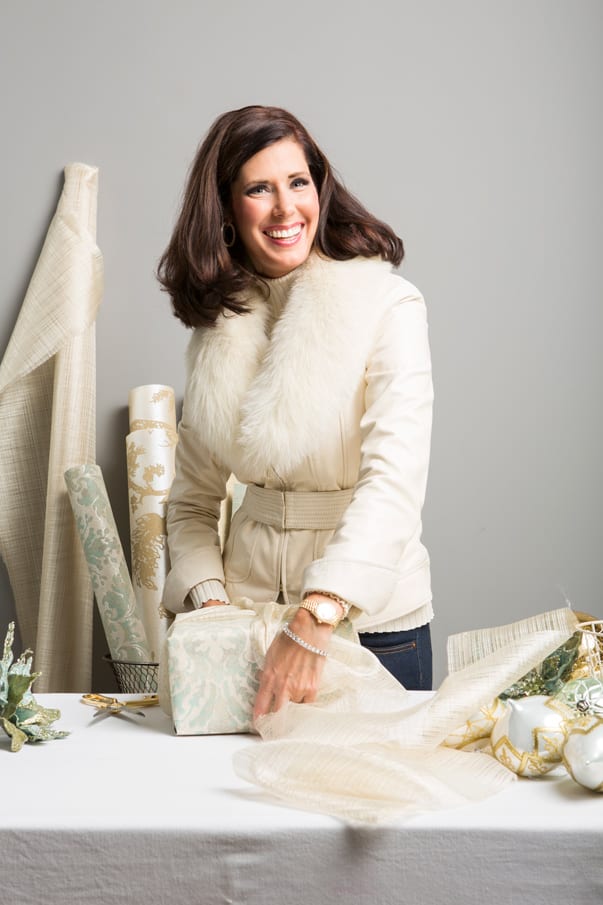 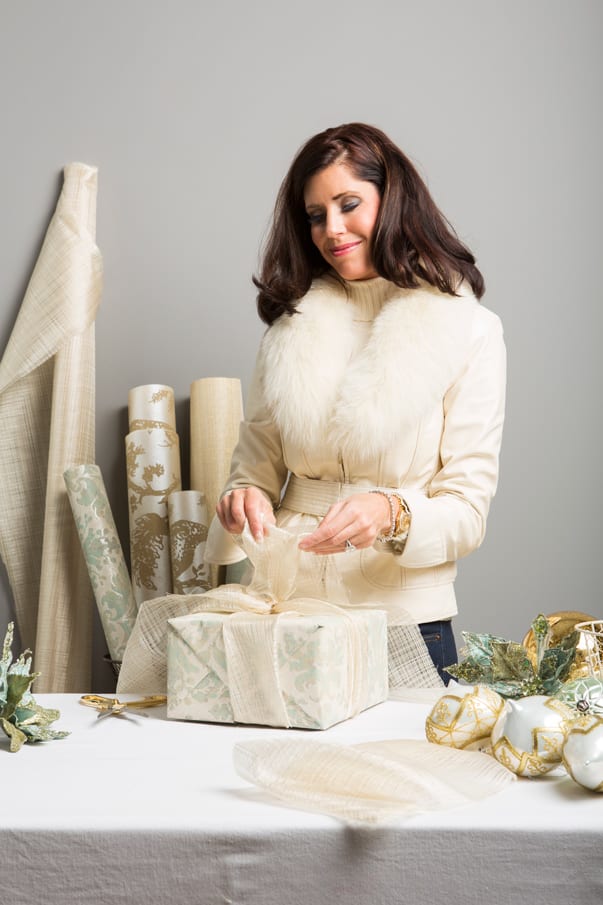 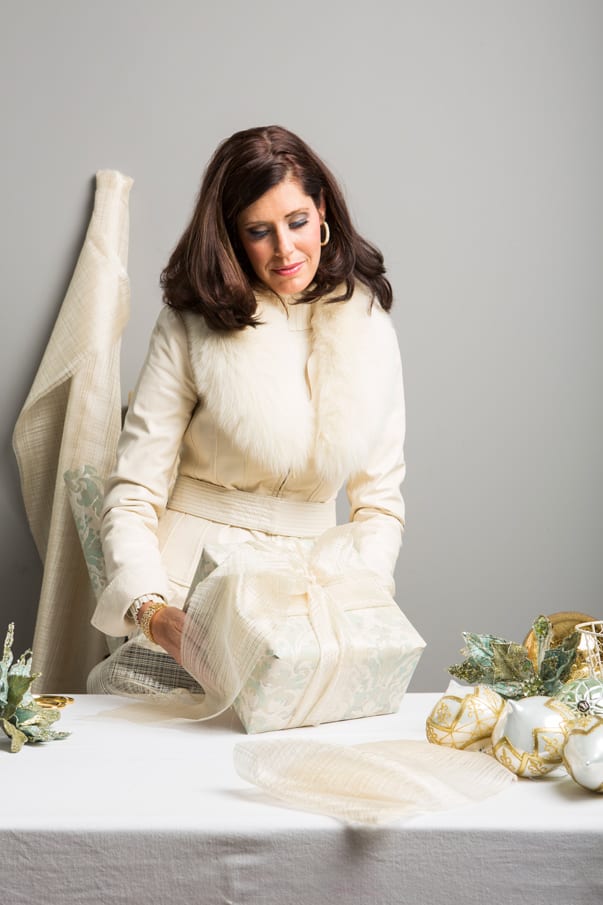 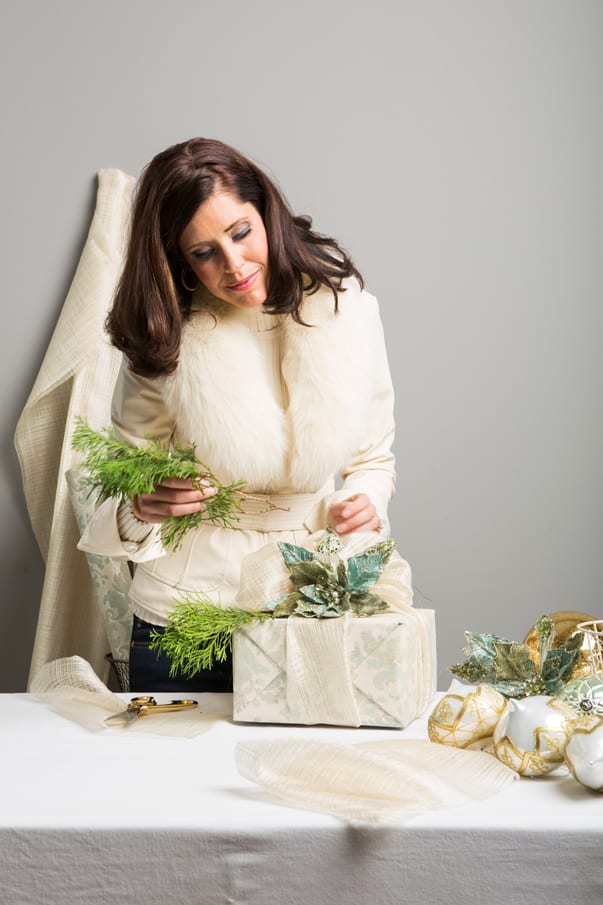 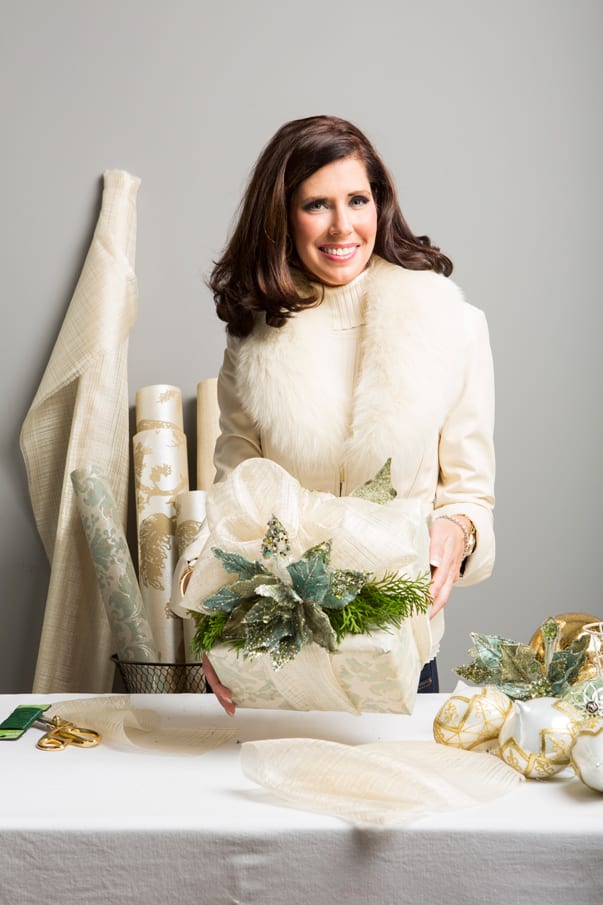 STEP ONE:  “Place the gift on the paper and cut the paper large enough to wrap your gift. Quality wallcovering is thicker than wrapping paper, so you will need a glue gun to secure the paper, instead of tape.”

STEP TWO: “We used sheer drapery fabric for our bows. The rolls are 110” wide, so we cut it 5” wide and cut the length of the roll. We then made a bow and tied with floral wire leaving enough room to tie the wire onto the package.”

STEP THREE: “Cut another strip about 8” of the sheer fabric the length of the roll. Wrap around the package and then cross the fabric under the package and bring around the package to the top and tie and leave about 8” on each side so you can secure the bow to the package. Cut the remainder of the fabric so you only see the bow and tuck any stray strands of fabric. After tucking the strays your finished product will be about 3” to 4” in width. When using sheer fabric you will have stray threads on the sides. Always tuck them under to conceal.”

STEP FIVE: “Finish off with fresh cedar to give your package an organic flair.”

Here’s what Shayla Had to say about some all-important holiday preferences:

Bags or wrapping paper? Ideally wrapping paper; however, I find myself continually gearing toward bags as I am so busy, especially during this time of year as we are in the midst of holiday decorating for clients. In fact, we start our first holiday décor clients in October…believe it or not!

To peek at Your Presents or Not? NOT!!! I LOVE a surprise and my husband genuinely loves to give and see the look on our faces Christmas morning. I’m so animated that he would for sure know I had peeked. Why ruin his fun??!!!

Cocoa or egg nog? Funny you ask, cocoa for SURE! I’m a chocolate addict, and I can’t get enough! My close friends ALL know that I will take hot chocolate over a latte, eggnog, or cider ANY DAY!! The Capital Hotel has the BEST hot chocolate in town, by the way.

Thanks, Shayla! See more images of Shayla’s gift wrapping in the article online, and stay tuned this week for one more “wrap” session with our third design expert. 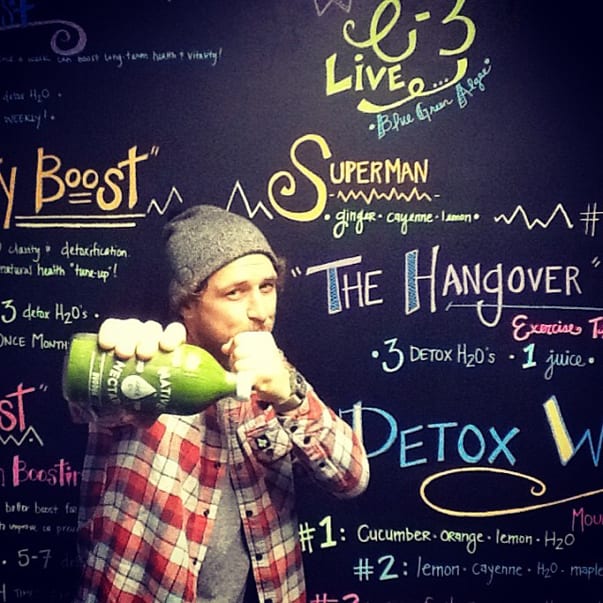 Arkansas in the Making is a series of interviews featuring local artisans, their workspaces and accoutrements. For this post, we spoke to Wilson Wood of Native Nectar Juice Co., a northwest Arkansas cold-pressed juice maker. 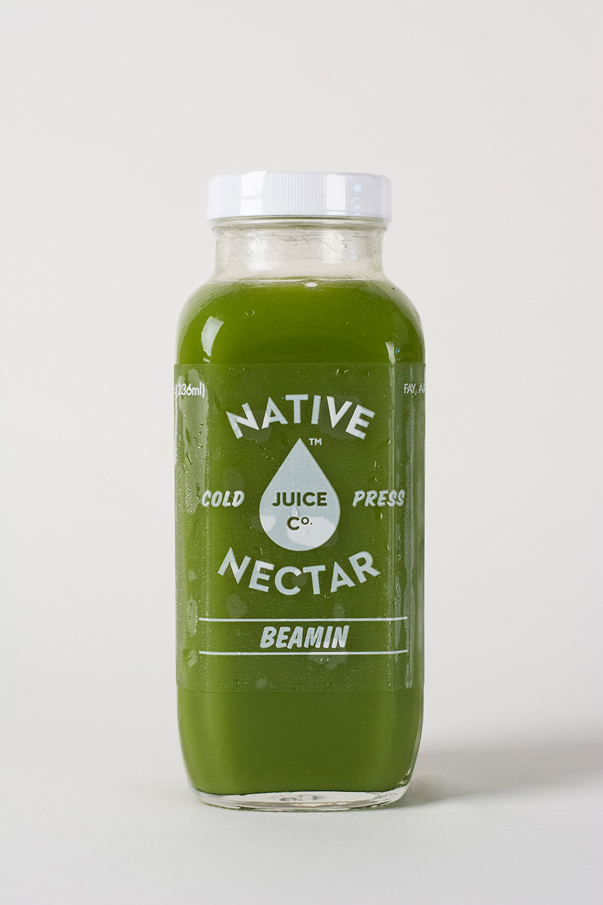 AHIA: What are your current obsessions? WW: Law of One, Ancient Knowledge, Aliens, Sacred Geometry

AHIA: What color could you not live without? WW: Green 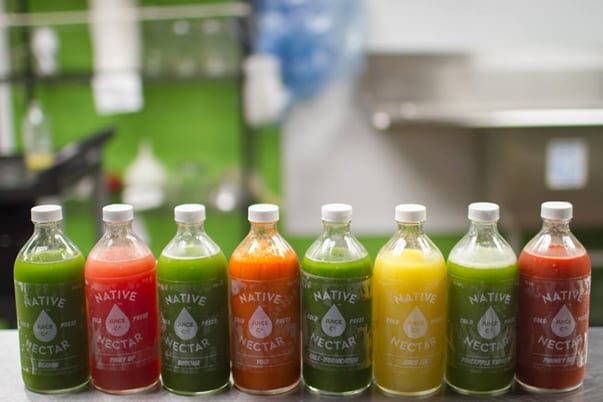 AHIA: Tell us about why you make juice. WW: I make juice because I am 100% a believer in the power of healing yourself with the food you put in your body. After watching the Gerson Miracle four years ago, it has changed my whole outlook on life and how to treat and cure illness. I am making it my mission to change people’s perception on eating good, quality, organic foods in Arkansas. 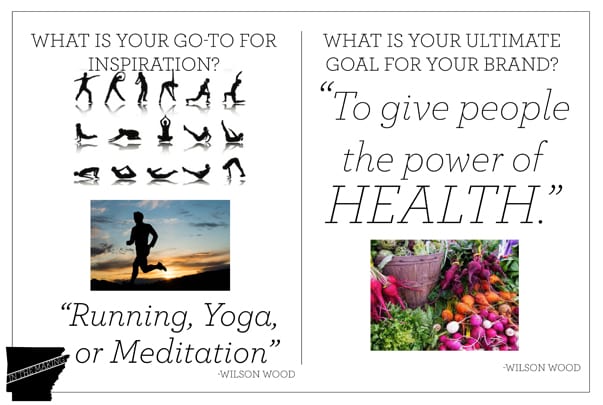 AHIA: What is your goal for your brand? WW: To give people the power of health on a day-to-day basis.

AHIA: What is your go-to for a quick burst of inspiration? WW: Running, yoga, or meditation.

AHIA: Which of your tools is most important for your work? WW: Norwalk Juicers! They are the best juicers on the planet and they are made right here in Arkansas.

AHIA: What makes your workspace uniquely yours? WW: The organized chaos of it all.

AHIA: To an aspiring artisan, what would you say is the most important part of doing creative work? WW: Stillness, being passionate, and surrounding yourself with inspiring people. 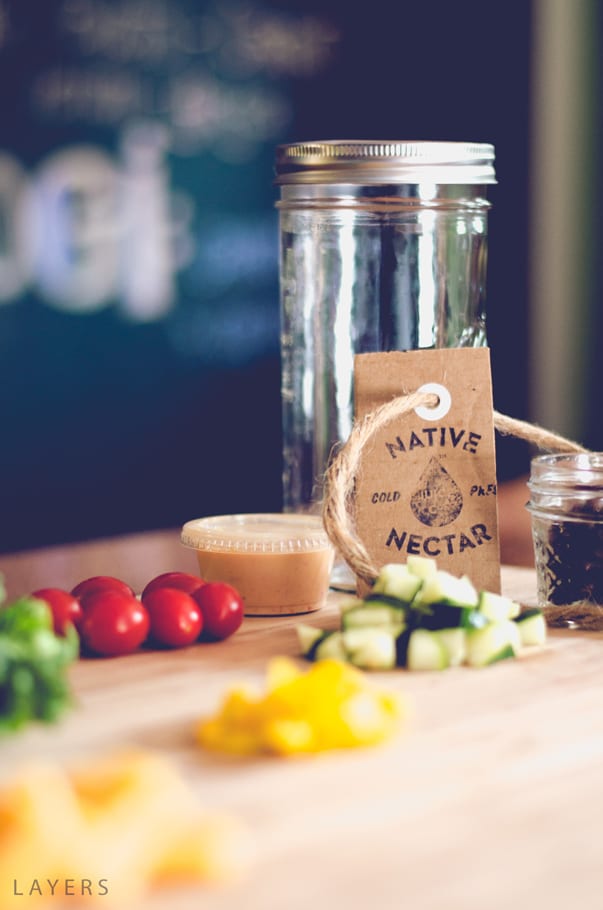 AHIA: How does your lifestyle support your work? WW: I try my hardest to live and eat as organically and healthily as possible; I definitely have my vices, though.

AHIA: What do you want your customers to know about you and your work. WW: I put everything I have into this…not just monetary investment; day in and day out I put my heart and soul into putting the best product out to our customers.

AHIA: Within the field of your work, who is your greatest inspiration/influence/role model, etc? WW: Helen and Bill Hammond (my business partner) and David Wolfe of Sunfood Organics. I can always count on him for the best sourcing and trend inspiration. 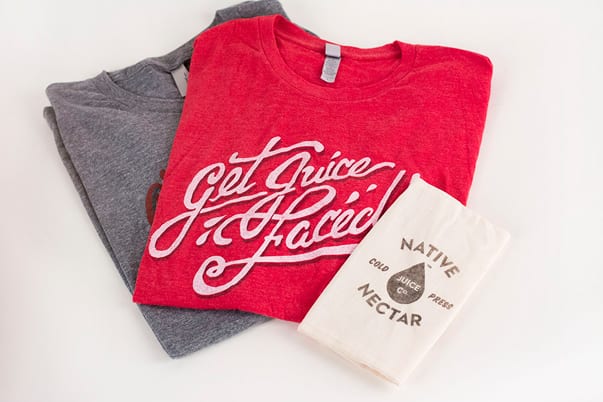 Thank you, Wilson! Do you want to sample the goods for yourself? Now is your chance! Wilson is offering Native Nectar juice to one lucky giveaway winner. To enter: Go and “Like” the Native Nectar Juice Co. Facebook page, then make sure you’ve already “Liked” the At Home in Arkansas Facebook page, and then let us know you’ve done so by leaving a comment below about why you are excited to get your hands on some of this cold-pressed deliciousness.  A winner will be selected at random on next Wednesday, August 20th at 4 pm. Best of luck! This giveaway is closed. Thanks to all who participated! The winner is Kaylin Gilkey! Kaylin you may contact us at agill@athomearkansas.com or call 501.666.5510 so that we can help you redeem your prize. 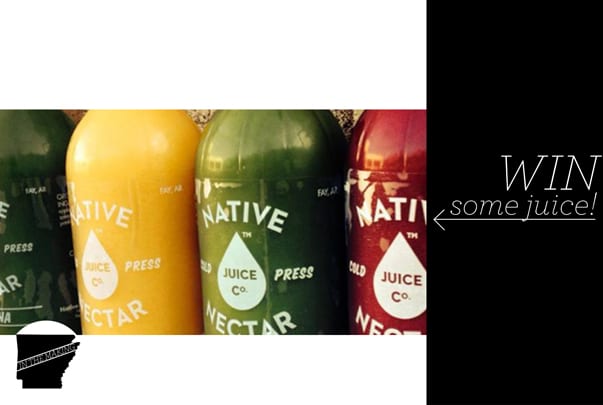 Native Nectar is also launching a kickstarter campaign on AUGUST 19th, so that they can expand their menu of all-organic, on-the-go meals geared toward raw, paleo, gluten-free, and vegan lifestyles. To support them, go to kickstarter.com and search for Native Nectar.