In Little Rock, designer Jonathan Parkey creates a nursery that checks all the boxes 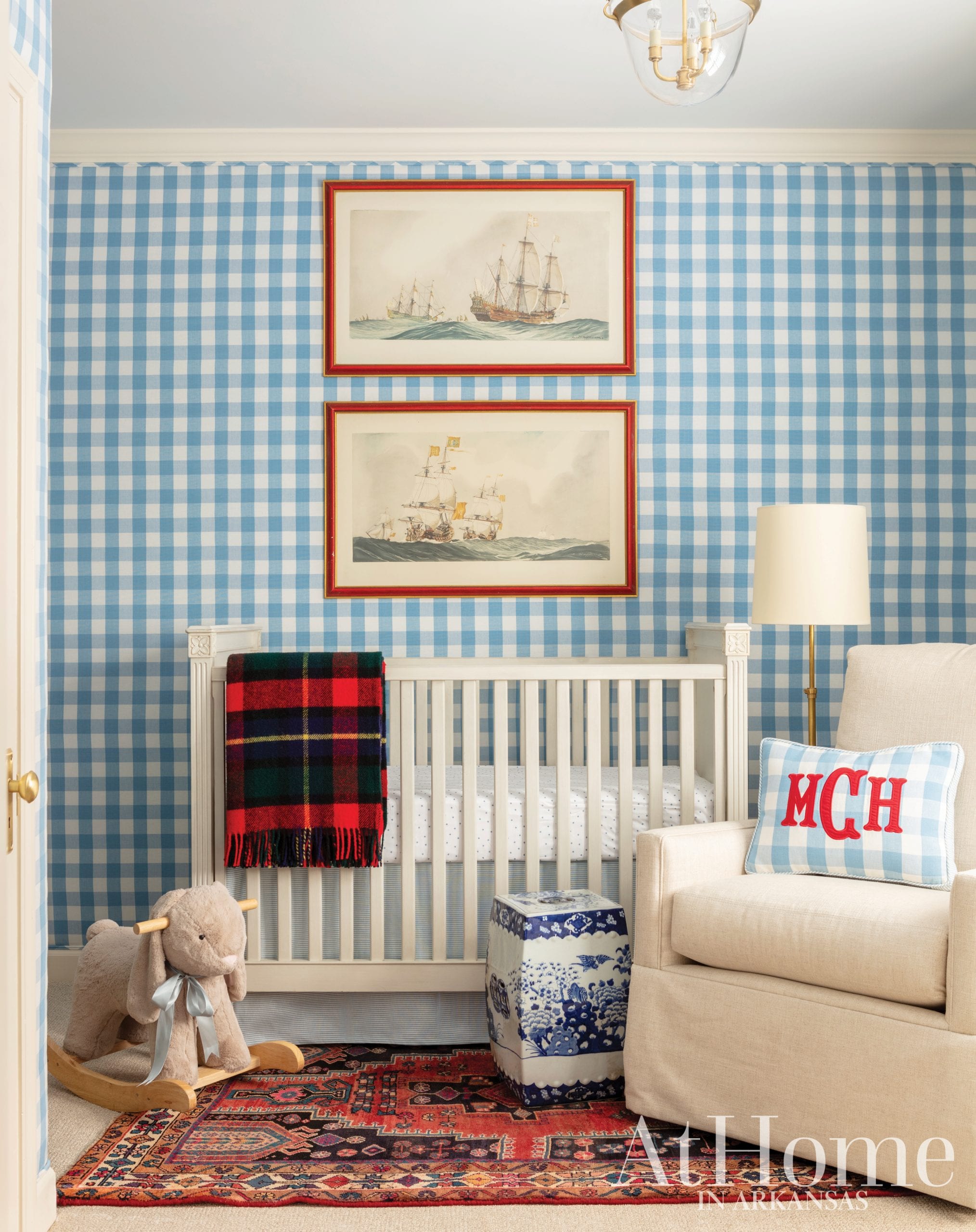 When longtime friend and client Meredith Causey told Jonathan Parkey, owner of J. Parkey, she wanted to convert her master closet into a sitting room, he knew something was up. A couple of weeks later, she confessed the room actually needed to become a nursery, as she and her husband, Chad, were expecting their third child. “We wanted to stay upstairs with our kids in this stage but there were no other bedrooms,” Meredith explains. The spacious closet, which is connected to the master bedroom, offered a solution. Jonathan knew he needed to get rolling on the project to meet baby boy Miller’s arrival date….

END_OF_DOCUMENT_TOKEN_TO_BE_REPLACED 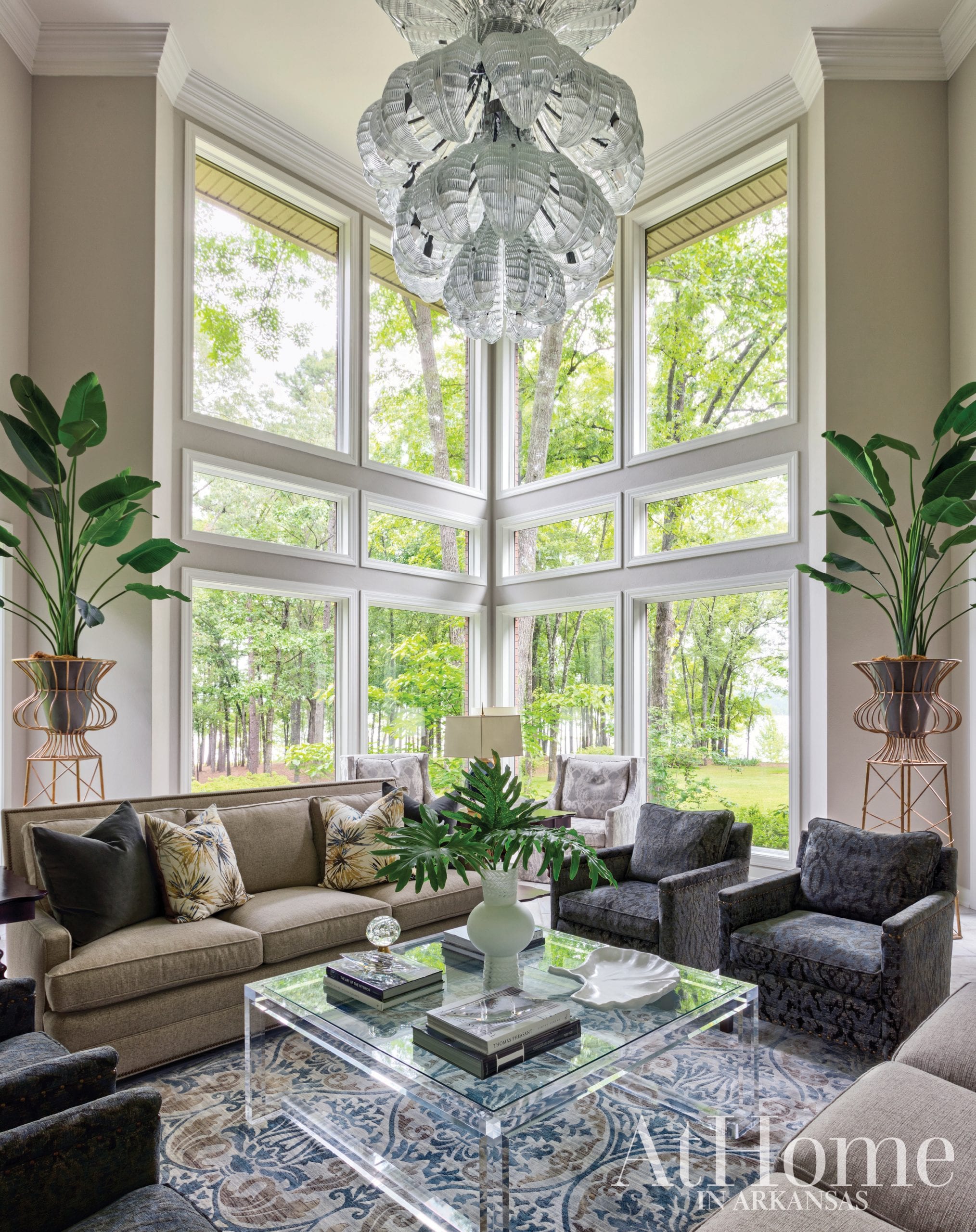 Greers Ferry Lake has always been a special place for Pam and John Morton. “John grew up in nearby Higden, and we have played on this lake together for 37 years,” Pam says. It was during their early years of marriage when they happened upon a peninsula with uncleared lots. Situated on the edge of town as well as the edge of the water, they were taken with the location. “John’s uncle was able to tell us a man from California owned the property. We tracked him down, and he said he wasn’t interested in selling; but two weeks later he called back, and the rest is history.” In 1998, the couple built what was then their primary residence on the pristine lots.

END_OF_DOCUMENT_TOKEN_TO_BE_REPLACED 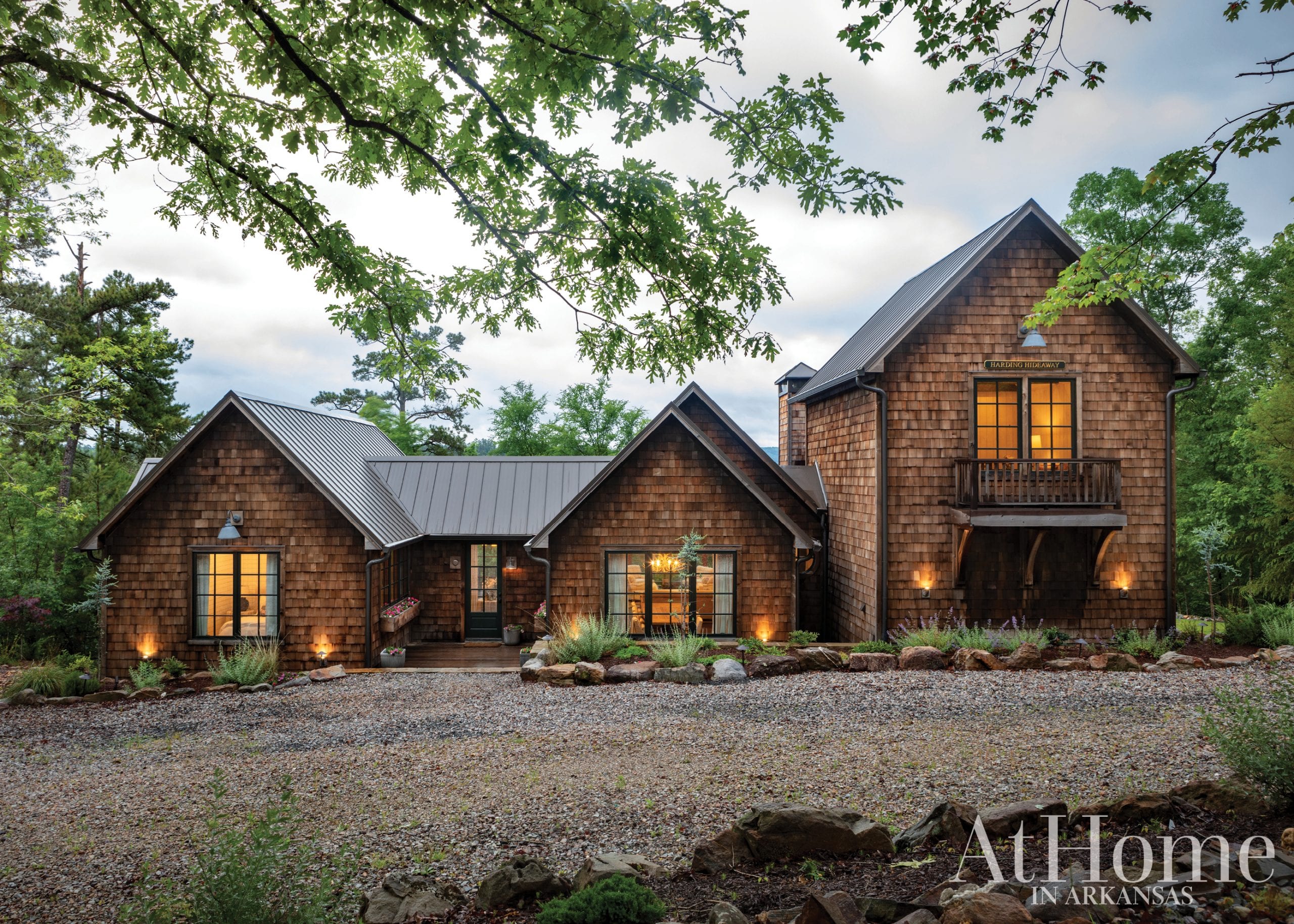 For Rachel Harding, a trip to the lake is about more than getting away. Having spent time growing up on Lake Ouachita at her father’s cabin—affectionately dubbed Parker Pointe, after his surname—she dreamed of having a place of her own one day. “Some of my most cherished childhood memories were coming out here,” she says. “There was no city water, so you were literally washing your hair off the back of the boat. There were no phones, no televisions here; we would just play games and be with family. It is a place I’ve always felt so connected to and happy about.”

END_OF_DOCUMENT_TOKEN_TO_BE_REPLACED

Inspired by the view, shades of blue and white fill this recently completed waterfront home 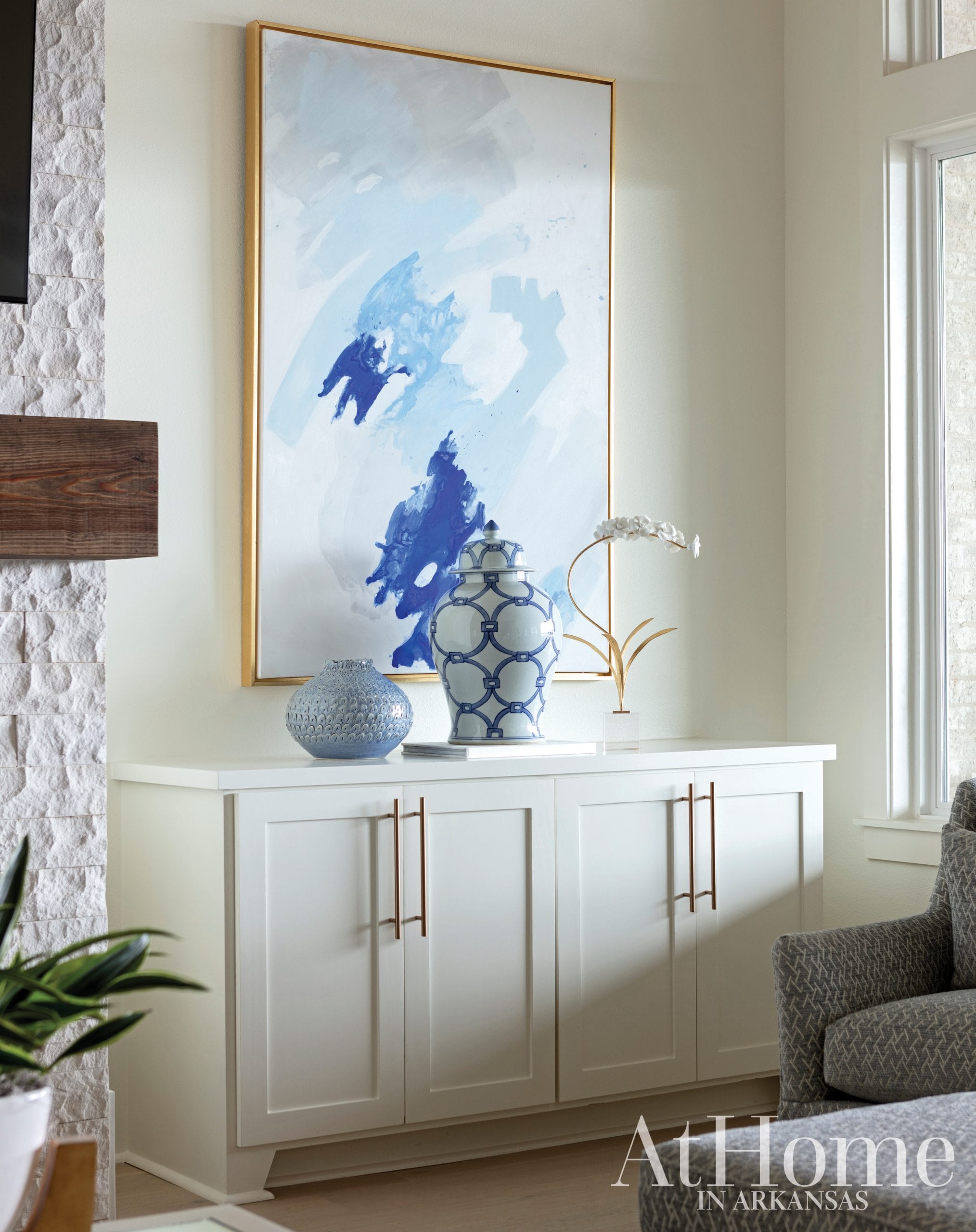 Waterfront homes have always been popular for their ability to offer an escape, and that was never more prized than last year when travel was limited. Therefore, it comes as no surprise that as 2020 played out, the owners of this newly built Hot Springs home on Lake Hamilton were looking for a getaway close to home—and fast. To make it happen, they turned to local design professionals Debi Davis of Debi Davis Interior Design and builder Doug Rodgers of Carriage Custom Homes.

“This house has a great plan for outdoor living—which is what everyone who builds on the lake wants. Even when you’re inside you can see the water and enjoy its beauty,” says Doug. He and his wife, Lain, have specialized in the Hot Springs area for more than a decade, he as a builder and she as a Realtor, selling both their spec homes and other lakeside properties. Their knowledge of the area helped them make this custom build a success on a tight schedule. The home was constructed and fully furnished in just five months, a feat even during a normal building climate. “I went every other weekend to see the progress in person,” Debi says. “And the Carriage team was amazing, calling and Facetiming me to keep the process going.” …

END_OF_DOCUMENT_TOKEN_TO_BE_REPLACED 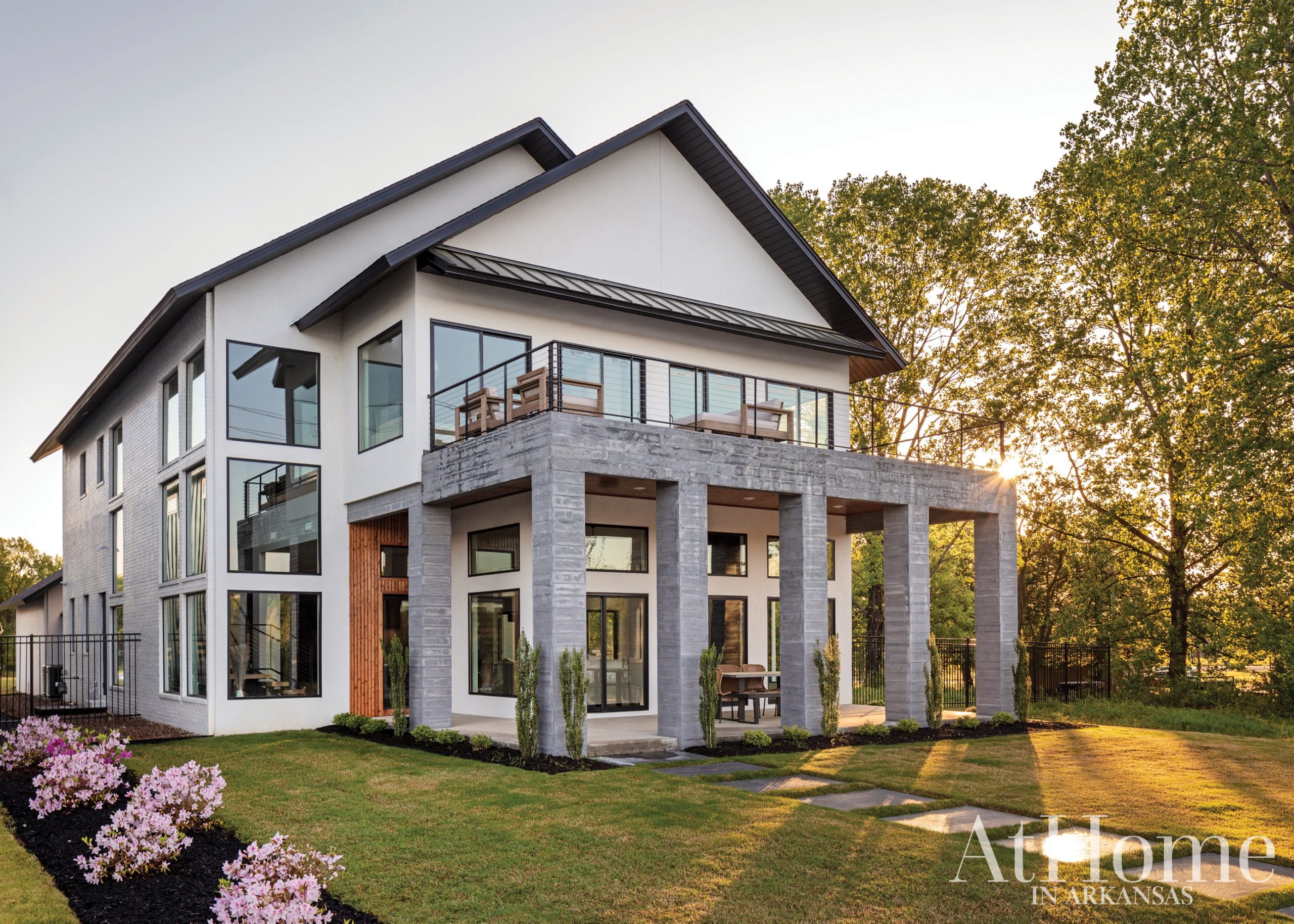 Look around the home of Catherine and Dr. John Sims in North Little Rock and you’ll notice nods to nature everywhere. The biggest, of course, is the view outside of the Arkansas River. In fact, seeing this lot in the city’s Rockwater community was one of the couple’s biggest motivators to build rather than buy when relocating from Manhattan back to their home state. “We were moving from the city, and a home in the suburbs just didn’t feel right,” Catherine says. With its proximity to Argenta and downtown Little Rock as well as trails and a view of the river, this location hit the perfect balance of city living and natural appeal.

When she started finding inspiration photos that reflected her and John’s “organic modern” style, Catherine realized how much their time in Bali had influenced their look. “We love to travel internationally, and we typically end up in Asia,” she says. “Before moving back to Arkansas we spent a month in Indonesia. The style in Bali is very neutral with cool tones and warm woods. There’s tons of windows and everything is very sparse, very natural.” Recognizing the calming effect this simplified, contemporary aesthetic had on them—especially amid hectic lifestyles and now with 5-month-old daughter, Aspen, in tow—she set out to incorporate many of those same elements into their new build. “We couldn’t have a totally open-air house like you would in Asia, but we wanted that feel,” she says. “The view outside here is changing all the time. It’s beautiful every season of the year; it’s like art.”…

END_OF_DOCUMENT_TOKEN_TO_BE_REPLACED 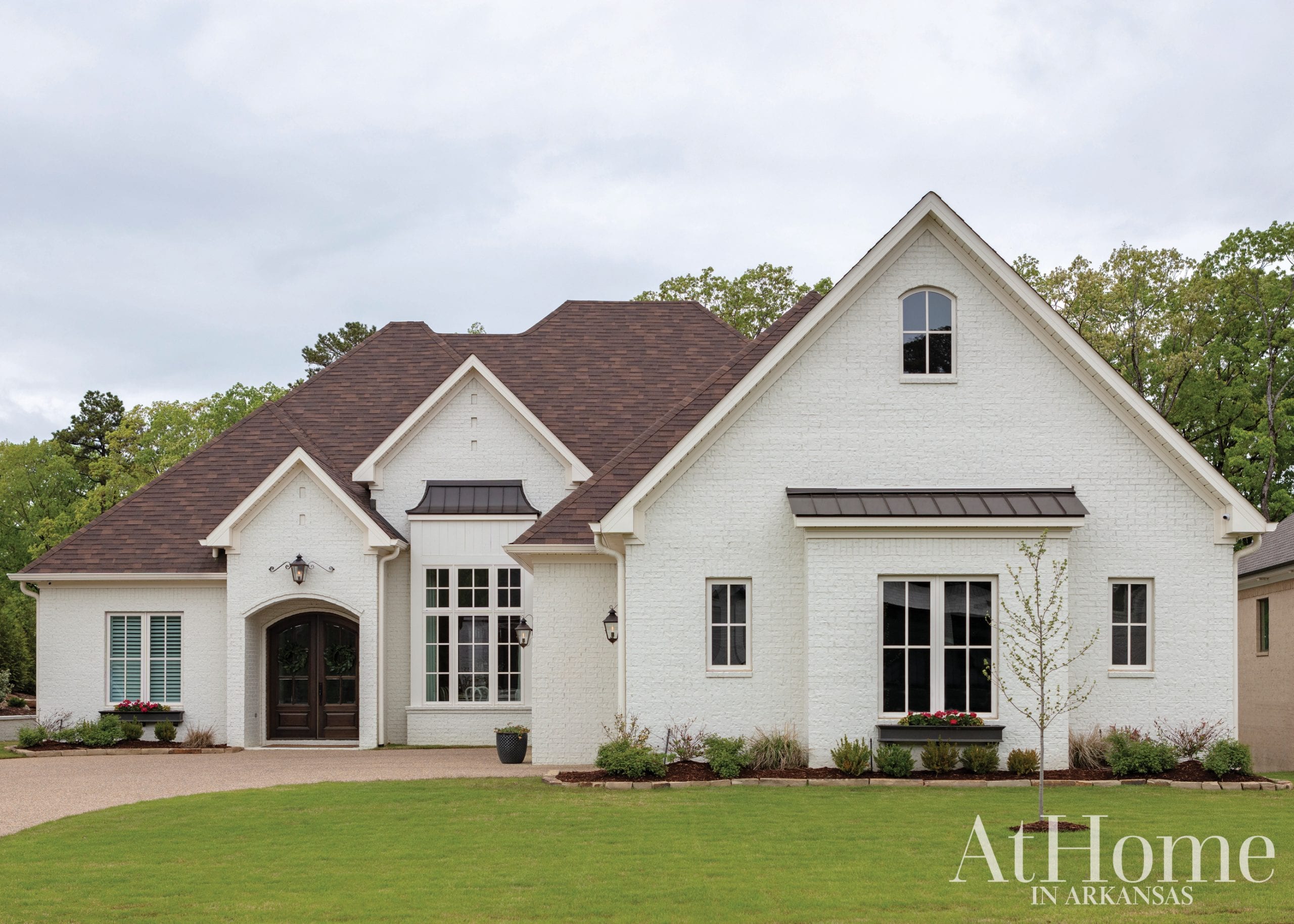 As newlyweds, Laura Beth Wortman Smith and her husband, Nate, scouted central Arkansas to find the perfect location for their first home together. “We were looking to buy but just weren’t finding anything that was a fit,” Laura Beth says. The couple talked with her father, Steve Wortman— president and owner of Little Rock’s Kaufman Lumber Co.—about the possibility of building, and he was able to help them locate a dream lot with a level yard and a natural setting in west Little Rock. …

END_OF_DOCUMENT_TOKEN_TO_BE_REPLACED

A Little Rock couple turns to B. Interiors and Richard Harp Homes to build a custom home perfectly suited to both their tastes 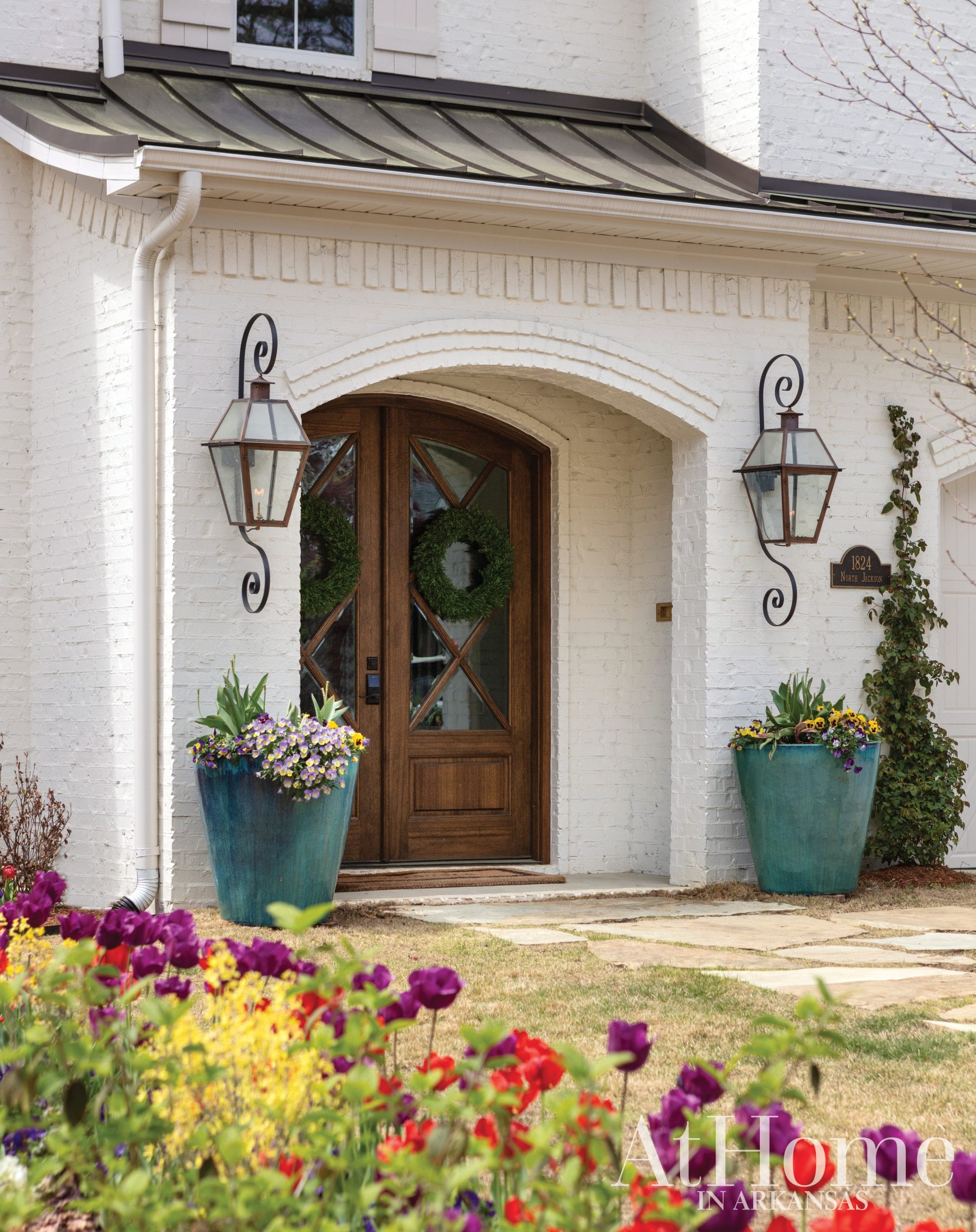 When Catherine Young and her husband, Dan, became engaged, one question loomed large: Where would they live? At the time, she had a home in west Little Rock while Dan was in a Heights house he had purchased almost two decades prior. After considering his fondness for his neighborhood and her desire to be within walking distance of shops and restaurants, they decided to combine their lives at Dan’s—but not in that exact house. To get the updates and square footage they wanted, they knew it would be best to start from scratch. “Dan also really wanted something that was ours,” Catherine says of the desire to build. …

END_OF_DOCUMENT_TOKEN_TO_BE_REPLACED 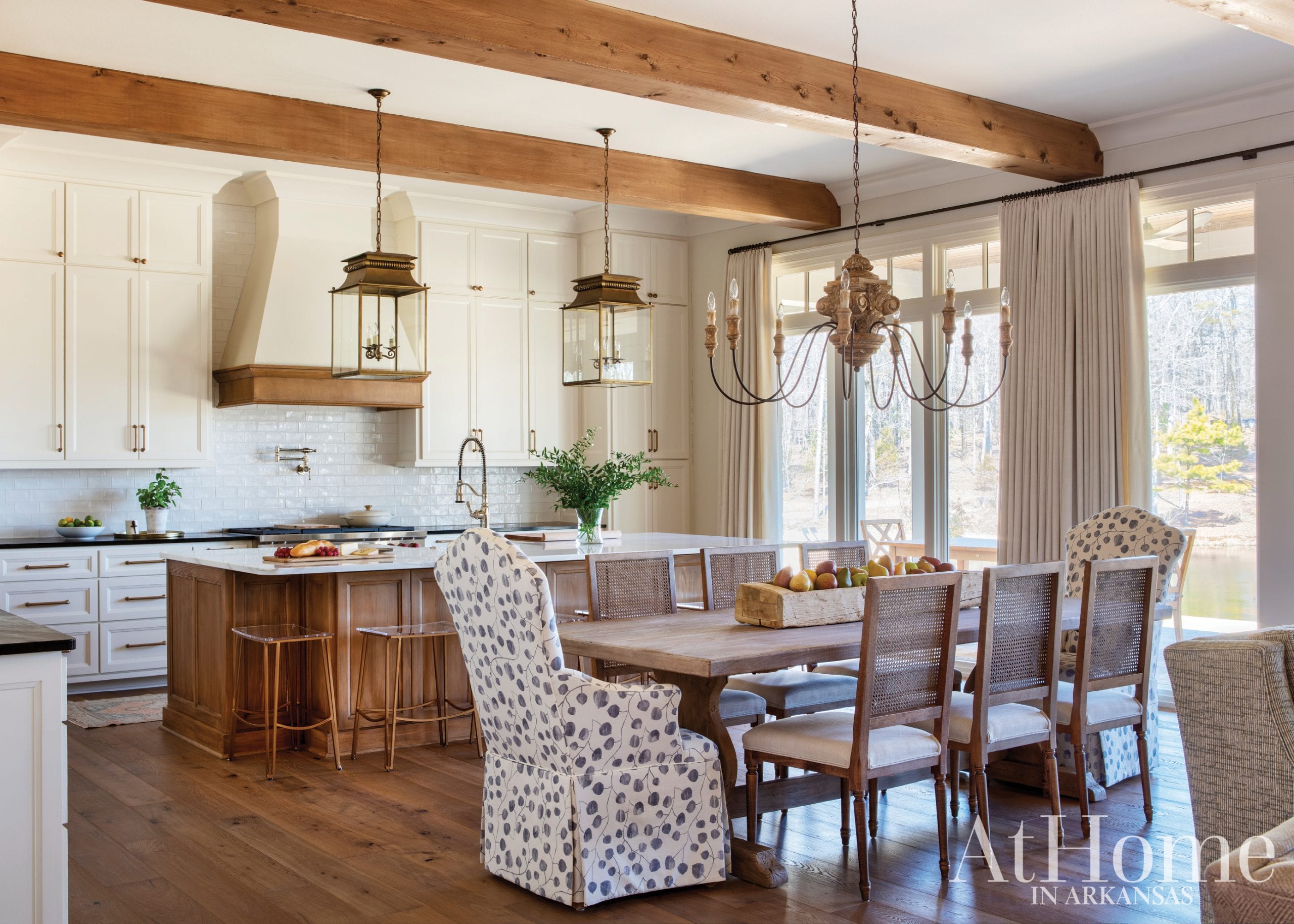 “This is our forever home, and we wanted to get it right,” one of the owners of this west Little Rock house says. Having raised their now college-age son in a tight-knit neighborhood, the couple looked forward to wide open spaces and natural views for their next phase of life, along with a home that would complement their down-to-earth, Southern style. After finding the perfect lot with a view of a pond and a natural hillside, they turned to Bill Parkinson and the team at Parkinson Building Group to get the ball rolling.

“We knew we wanted an open plan; we aren’t a formal family,” the homeowner says, noting the dining room in their previous home was underused. After seeing another home Bill had built, they fell in love with its floor plan and made a few tweaks to customize it. “It’s really helpful when a client can walk through a previous build we’ve done and use it to help visualize their home and gain inspiration,” Bill says….

END_OF_DOCUMENT_TOKEN_TO_BE_REPLACED 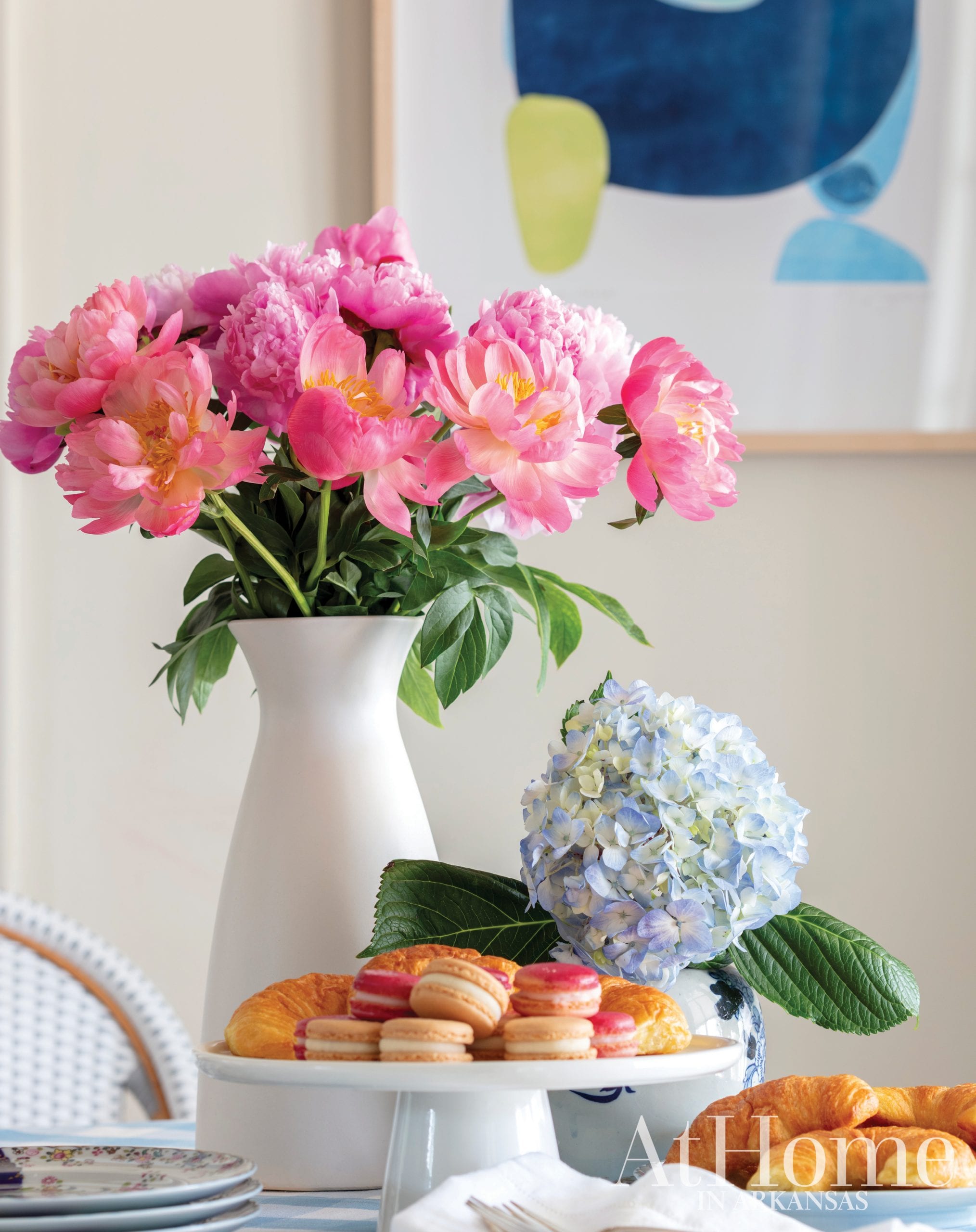 In early 2020, Lauren and Nate Steel started looking for a house that would suit their needs as a growing family. “Our previous home had some great outdoor living, but the family living room was very cramped and didn’t have very much light,” Lauren says. “We needed more space, and I also wanted it to be more open with plenty of room for kids to move around.”

When the couple happened upon this home for sale in the Heights, Lauren invited designer Jonathan Parkey—who had helped her pull together several rooms in her previous house—to see it. Jonathan, who also owns a namesake store in the neighborhood, immediately saw potential in its classic bones and easy flow. “Lauren is pretty traditional, as is Nate, and I wanted to help them create a home that felt fitting for the older neighborhood, but also fresh and modern,” he says. To achieve this, he juxtaposed traditional elements such as antiques, stripes, and chinoiserie with clean lines and a bold combination of patterns. “We were playing off the idea of someone walking in here and not knowing for sure whether this was once Lauren’s grandmother’s or great-grandmother’s house,” Jonathan says. “It was that feeling of blowing the dust off something old and making it new again.” Because the Steels have three children under the age of 5, keeping the look playful was also a priority. “I wanted it to be bright and fun in a way that the kids would enjoy, but also worthy of the history of the home,” Jonathan says. “This design feels timeless, and they still have the space to grow into it and entertain.”…

END_OF_DOCUMENT_TOKEN_TO_BE_REPLACED 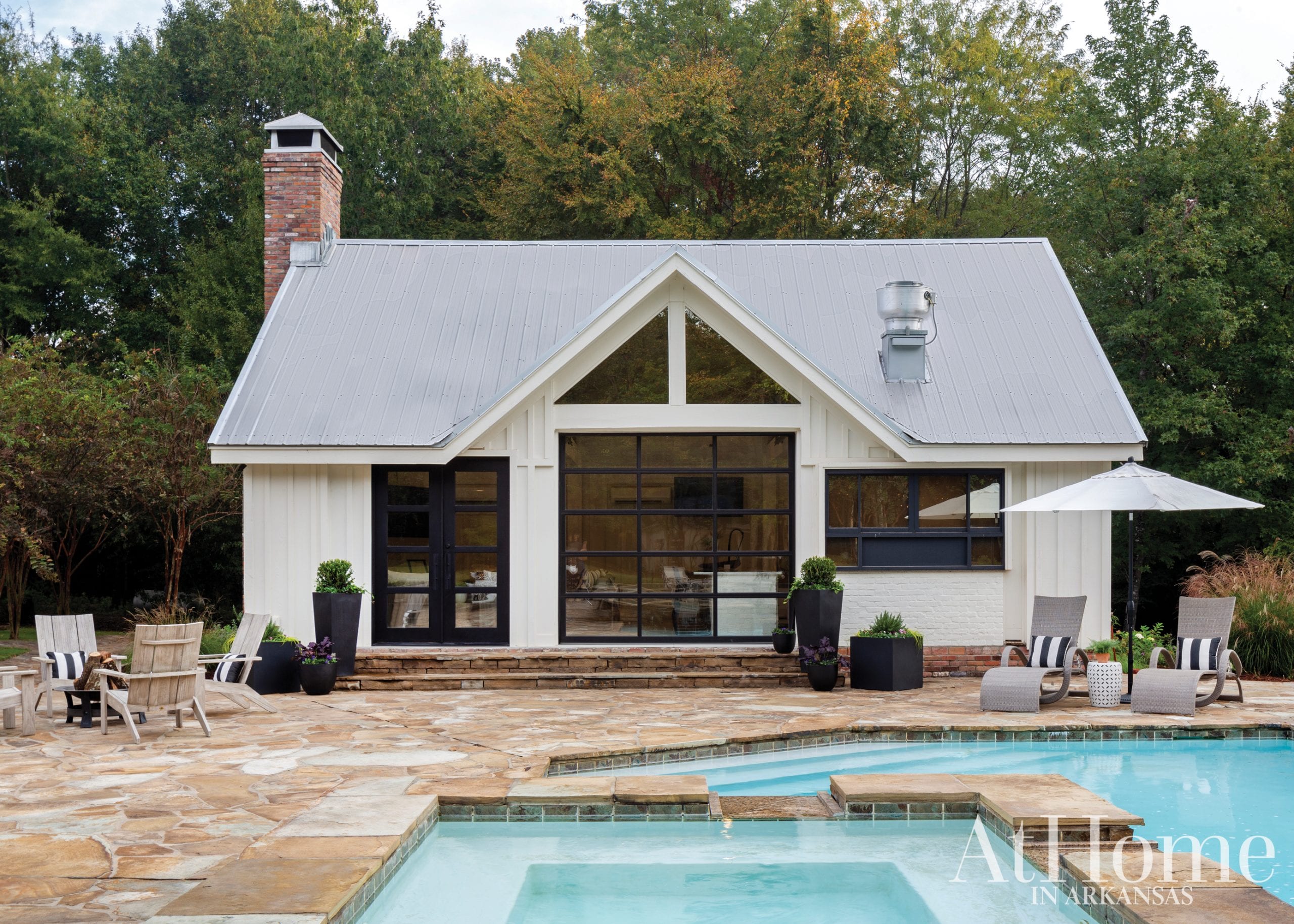 Before this home’s outdoor living areas were remodeled, its owners had a problem: The spaces were only usable for a few months of the year. Now, thanks to a renovation that included enclosing an open cabana to create a pool house and furnishing the front porch, one of the happy homeowners describes a more welcome dilemma: “It’s hard to pick a place to sit!” she laughs. “We have so many favorite spots now. It’s all so relaxing and inviting.”